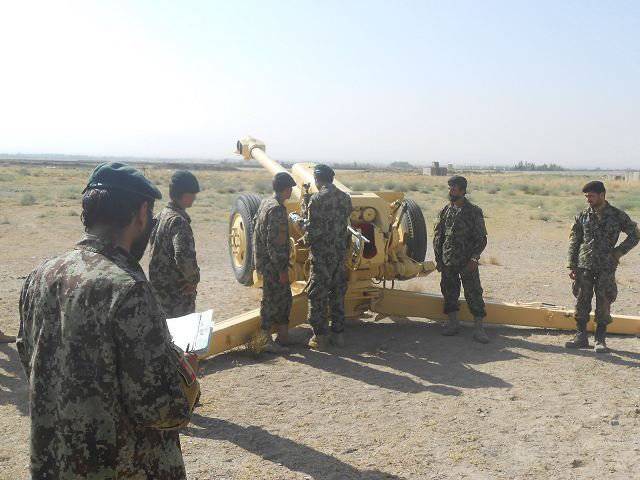 For its part, the command of the Armed Forces of Ukraine (VSU) is currently completing its own equipment tests and intends to purchase 500 sets of UBLFDS, which are scheduled for delivery to the VSU in the middle of 2014.

The effective combat use of 122-mm towed howitzers D-30 is the main means of the NSAA, providing the ability to conduct operations without the support of the international security assistance forces ISAF. In some cases, these systems will be used instead of directly aviation Support provided by ISAF.

As previously reported by Janes, NBCA is experiencing serious problems in the combat use of the D-30 howitzers due to the lack of qualified specialists capable of preparing gun crews.

From August to October 2013, representatives of UDC worked with cadets of the MFA department of the Ukrainian Academy of Land Forces to conduct field tests of UBLFDS kits using D-30 howitzers at the test site in Lviv. According to the UDC representative, the cadets have mastered the use of the UBLFDS product after 20 minutes. briefing.

During November 2013 of the year, UDC specialists tested UBLFDS products on 122-mm MLRS BM-21 “Grad” at the test site in Rovno. The tests were conducted during the exercise of the 80-th airmobile regiment of the Army of Ukraine.

The UBLFDS system kit allows real-time distribution of data across the network to speed up the combat work process (firing) and increase its efficiency. The product allows you to automate the process of preparing installations for firing and accurate targeting of various samples of artillery guns.

The UBLFDS system kit consists of a laptop computer (based on a TDS NOMAD PDA) with a senior battery officer (battery commander), position sensors (mounted on guns), and tablet PCs (for each gun commander).

All elements of this system are connected wirelessly. The battery commander from positional sensors receives data on the position of the guns and their orientation. After entering (receiving a command from a senior officer) type of target, type of weapons, ammunition and other data necessary to perform the task, the battery commander can give commands to take up the firing position with sending a message containing the firing task to the tablet PC of each gun commander.

The modular meteorological station 110-WS-16 is used to provide batteries with meteorological data. Meteorological data is transmitted via Bluetooth (Bluetooth). The equipment operates in the NATO horizontal angle measurement system (6400 of the goniometer divisions) and the former Warsaw Pact Organization (6000 of the goniometer divisions) and applies the coordinates of the Mercator Universal Projection (UTM) cartographic systems and the Pulkovo-1942 geodetic coordinate system (CK-42).

UDC also offers products with appropriate software for combat use of the following artillery systems:

Ctrl Enter
Noticed oshЫbku Highlight text and press. Ctrl + Enter
We are
Weekly summary (30 January-5 February) on the military and social situation in the DPR from the military officer "Mag"Knights of logistics in shining armor. The experience of Iraq, Afghanistan and not only
Military Reviewin Yandex News
Military Reviewin Google News
14 comments
Information
Dear reader, to leave comments on the publication, you must sign in.