Political analyst Alexei Pushkov: “The year ends for Russia“ on a strong note ”” 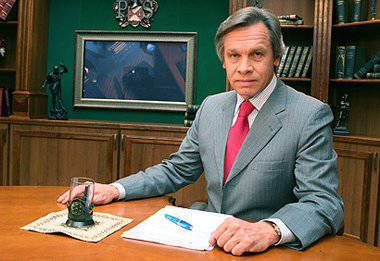 The results of Russia's actions on the “world chessboard” in the outgoing year in the pages of File-RF are discussed by the chairman of the State Duma Committee on International Affairs Alexey PUSHKOV.


- From the point of view of foreign policy, 2013 is a successful year for Russia, although it started in a conflict atmosphere: 2012 ended in a conflict with the United States on two important aspects of bilateral relations - the adoption of the “Magnitsky law” in the US and “Dima's law” in Russia Yakovlev. And there was a feeling that we are going to intensive political confrontation with the USA.

Both laws have caused a strong reaction in the United States and Russia. But after a while the intensity of the confrontation subsided. For two reasons.

The first: “Magnitsky law”, in my opinion, is a political dummy that exists in a strange formulation. Congress had to counterbalance the repeal of the Jackson-Vanik amendment, which gave freedom to the Russian trade, although some senators said that the “Magnitsky list” would be the basis for protecting prisoners around the world.

But in the final formulation of the law, the Congress showed its narrow political orientation precisely against the Russian Federation. Therefore, he did not acquire a convincing character, and it was not by chance that the US administration chose to reduce the significance of the law, and recently decided not to expand the lists. The first element of tension, from which the year began, came to naught.

The second reason: “the law of Dima Yakovlev” (we were portrayed by the Western media and the liberal ones as extremely negative) justified itself.

It was only thanks to him that the American authorities began to take seriously the issue of the fate of Russian children in the United States. After the adoption of this law, the US Secretary of State set the task before the State Department to seriously address this problem: to collect information, to transfer it to us.

Only after this law in the United States decided that really need to restore order in this area. This does not mean that it is induced, but the American side acknowledged that there are problems, and these problems must be solved. Before the adoption of the law, we did not consider it necessary to respond to our requests.

From the second half of the year, a series of successes of Russian foreign policy began. This is Syria, this is the decision of the Armenian leadership to join the Customs Union, this is the outcome of the Ukrainian crisis. Successes are associated with several factors.

There is a relative weakening of the US role in world politics, which is visible to the naked eye.

We already live and operate in a multipolar world. The peak of a unipolar world fell on the rule of President Bush, at the same time this “world” failed. To pursue a policy of domination, we need a larger reserve of forces than the United States now has.

When a country faces the fact that its public debt exceeds its GDP by 10%, then naturally this limits its possibilities. When it is said for two times a year that a default may occur in the States, in such conditions it is very difficult to pursue a policy of hegemony in the world.

Syria has demonstrated that the United States is in a very difficult phase of its development. The United States did not have enough foreign policy levers or internal confidence to resolve the Syrian issue.

Practically no one in the world supported the military scenario of solving the Syrian problem. After Iraq and Afghanistan, it became clear to everyone that this is a bad way to solve problems — this is a scenario of exacerbating problems.

There is also a weakening of the European Union as a foreign player. It is associated with a very serious crisis in the EU, which should not be underestimated. The crisis is connected with the economic failure of 2008-2009, from which Europe has not yet emerged. There are still several zones of strong social tension.

So, in Spain unemployment is 25%, among young people - up to 40. Greece, if it were not for financial assistance, on the verge of economic collapse, it is unclear how it will give its huge debt in 365 billions of dollars. In Cyprus, the "holy laws" of the liberal economy were violated - the accounts of individuals in a number of troubled banks were canceled, this is a complete scandal.

I just returned from France, the main political issue there is the rise of the National Front Marine Le Pen: 20-22% - the level of popularity, very good prospects for elections to the European Parliament.

This is a reflection of a general trend: right-wing populist parties have arisen in most European countries, which cast doubt on the participation of these countries in the European Union and the eurozone. This is what we see in very many states.

In the last election, the Austrian Freedom Party, even more radical than the French Popular Front, received an 21,5% vote. The True Finns party, which opposes EU policies at least in the field of immigration, has 18% of votes. There are strong right-wing movements in Greece, Holland and a number of other states.

Even in Germany, which the crisis affected least of all, the new party (created two years ago), which is fundamentally in favor of withdrawing from the eurozone, received an 4,5% in the last election.

All these examples prove that a very powerful Euroscepticism movement has arisen within Europe, which casts doubt on the very foundations of the EU’s existence.

From here and the extremely unconvincing policy of the European Union concerning Ukraine. What the EU has offered is an absolutely scandalous proposal: “We will give you our standards, allocate assistance for the development of democratic institutions and give an opportunity to convince ourselves that you will join Europe sometime.”

Ukraine offered the European myth. In exchange, it was necessary to release Yulia Tymoshenko, raise gas tariffs for the population, tighten the belts in fiscal policy, accept IMF loans under tough economic requirements. In fact, it offered a direct path to financial default and to extreme social instability.

Why did the EU put forward unattractive offers? I believe that in the West a certain complex of super-full value is preserved in relation to a number of states, in particular, Eastern Europe. The West has convinced itself that it is an ideal model, and people in pursuit of European myth should automatically agree with everything that the European Union offers.

In Ukraine, many agree to follow the path proposed by the EU. But this path is, in general, nowhere. Ukraine, no one offers to join the EU, the association leads to dependence, EU officials will have the right to interfere in the internal affairs of Ukraine. It would turn into an economic semi-colony of the European Union.

The EU was unable to give Ukraine 20 billion euros due to lack of funds. The European Union is very overworked, extinguishing crises in other EU countries.

The European Union was not up to the mark of the tasks that confronted him, if he really wanted to get Ukraine into the sphere of influence of the EU - this is the essence of the Eastern Partnership. It was not possible to get Armenia either: Brussels was shocked to learn that Yerevan would not sign the association agreement.

Russia showed the ability to use not only the financial leverage that we now have, but also rather subtle enough to carry out the diplomatic line. We offered financial assistance to Ukraine, without putting any political demands before it, which is always painfully perceived by nations (unlike the EU and the US, which dictated political conditions to Ukraine). About her accession to the Customs Union while we are not talking.

Russia in Ukraine, both politically and morally, has a much more advantageous position than the West, which reacted hysterically and actually called for the Maidan to overthrow the leadership of Ukraine.

So the year ends for Russia "on a strong note." This shows both a slight increase in our capabilities, and a weakening of the main centers of power that previously defined the international agenda - first of all, the United States and the European Union.