December 30 2013
71
The Department of Defense Industry (Savunma Sanayii Müsteşarlığı - SSM) of the Turkish Ministry of Defense on December 26, 2013 officially awarded a victory in the tender for the Havuzlu Çıkarma Gemisi (LPD) program for the construction of a universal landing ship (UDC) for the Turkish Navy of the Turkish shipbuilding company SEDEF Gemi İnşat (Istanbul), having decided to start negotiations on concluding a contract with the latter. SEDEF was a tender representative of the Spanish shipbuilding association Navantia with a proposal for the design of the universal landing ship Juan Carlos I, previously built for the Spanish fleet.


The Havuzlu armaıkarma Gemisi (LPD) program worth 1,7 billion, launched in 2006, provides for the acquisition of one UDC for the Turkish fleet and, for use from it, four LCM tanks, two small landing boats LCVP and 27 amphibious tracked armored vehicles. . The lead contractor in the delivery should be a private Turkish shipyard. In February 2010, the SSM, sent tenders to seven Turkish shipbuilding companies (ADIK, Çelik Tekne, Dearsan Shipyard, Desan Shipyard, RMK Marine, SEDEF and Naval Shipyard in Istanbul), which operated mainly in cooperation with foreign partners (and mostly foreign projects). In May, 2011 of the year included SEDEF (which presented the project UDC Juan Carlos I of Spanish Navantia), RMK Marine (with its own project developed with the assistance of the British design company TDC) and Desan Shipyard (presented the project of South Korean Hanjin Heavy Industries based on UDC Dokdo - in the end, SSM 26 December 2013 awarded him the second place). The final decision on the tender was originally planned to be taken by May 2012 of the year, but in the end it was made with more than a year and a half late.

This is the second export success of the project developed by Navantia Juan Carlos I after a well-known contract for two ships of this type with Australia. Most likely, the construction of the UDC for Turkey will be carried out according to the Australian scheme - with the construction of the ship hull at the Navantia shipyard in El Ferrol, followed by completion at the SEDEF plant in Istanbul. 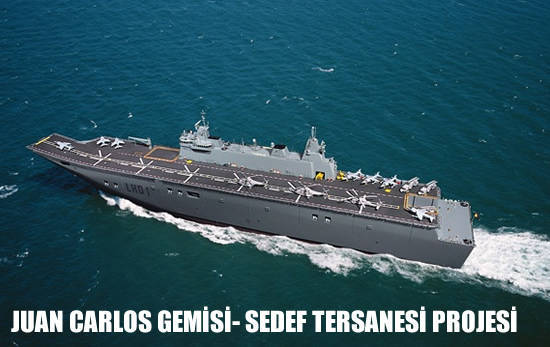 Design image of the universal landing ship of the Juan Carlos I type in the version for the Turkish Navy (c) SEDEF Gemi İnşaatı A.Ş

Ctrl Enter
Noticed oshЫbku Highlight text and press. Ctrl + Enter
We are
Everything is at home: Turkey is committed to an independent military industryTurkey is building a universal landing ship on the program Havuzlu ıkarma Gemisi (LPD)
Military Reviewin Yandex News
Military Reviewin Google News
71 comment
Information
Dear reader, to leave comments on the publication, you must sign in.