The long road to the sky. The new Soyuz-2.1В booster, the launch of which has been repeatedly postponed, first set off into space 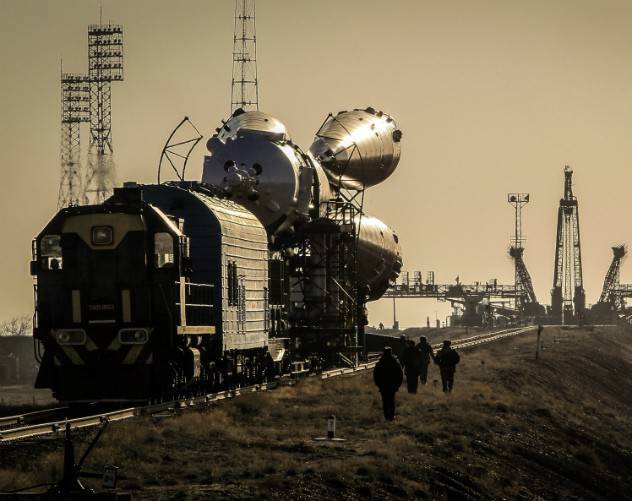 All Saturday, intrigue about the launch of the new Soyuz-2.1B light class rocket continued. In the morning there was a message that she would leave, but at the appointed time there was a retreat; sources said that the launch this year did not take place. However, it turned out that for an unnamed reason, the start time was only postponed. As a result, the launch was successful.


The deputy director of the press service and information of the Ministry of Defense, Alexei Komarov, announced the successful launch. According to him, the Aerospace Defense Forces conducted a regular launch of the rocket.

“On Saturday, December 28 2013, at 16 30 minutes (Moscow time) from the launcher platform No. 4 platform 43 of the Plesetsk cosmodrome, the crew of the aerospace defense successfully launched a unique Soyuz-2.1В light-carrier rocket with a class launching the Volga and the Stork spacecraft, he said.

The general launch command was carried out by the Commander of the Aerospace Defense Forces, Major General Alexander Golovko.

As specified in the Ministry of Defense, and all pre-launch operations, and the launch of the carrier rocket took place in the normal mode. Ground means of the Aerospace Defense Forces exercised control over the launch and flight, noted in the administration.

In 16 hours 37 minutes, the Volga launch unit was successfully separated from the launch vehicle and taken to be accompanied by ground-based facilities of the Main Test Space Center. G.S. Titov of the Space Command of the Military Space Defense Forces, added there.

The launch of the Stork satellite into the target orbit is expected approximately one and a half hours after launch.

The launch of the new Russian Soyuz-2.1В launch vehicle with the Volga launch unit and the Stork student satellite was first scheduled for 14.00 Moscow time on Saturday. This decision was taken on the same day in the morning by the state commission, as reported by the head of the press service of Roskosmos, Irina Zubareva.

However, a little later there was information that the launch at the last moment was again postponed. About this RIA "News”The spokesman for the press service and information department of the Russian Defense Ministry for the Aerospace Defense troops, Colonel Dmitry Zenin, said. "Hang up!" - said Zenin at the time of the expected launch of the rocket, without specifying the reasons for the cancellation of the launch.

In turn, a source familiar with the situation, explained ITAR-TASS, that the reason is related to technical malfunctions. “Physically everything is fine with the rocket, however there are some technical problems that do not allow launching. It is currently being decided what to do with it. Additional tests will be conducted, ”he said.

According to a source in the rocket and space industry, "most likely, the launch of the rocket will take place already in 2014 year."

Note that this launch was postponed repeatedly. Initially, it was to be held last year. In October of this year, it was postponed to December to replace the launch vehicle (instead of the first flight copy, in which, after unsuccessful tests, engines of the first stage would be changed, a second copy flew into space).

The rocket was installed on the launch complex of the Plesetsk cosmodrome 18 December. The launch was to take place on December 23, then it was shifted to the backup date - the 24 number, but it did not take place that day either. He did not take place and December 25 - the decision to cancel was made a few minutes before the scheduled time of contact recovery. And finally, 28-th start was successful.

The Soyuz-2 launch vehicle of stage 1В is a two-stage, lightweight class. Together with the “Volga” upper stage, it is intended for launching circular orbits up to 1500 km and sun-synchronous orbits up to 850 km for various spacecraft.

The creation of carriers of this class is due to the tendency to increase the need for launching small spacecraft, as well as the completion of the operation of Cyclone and Cosmos products and the need to duplicate the Rokot launch vehicle, and in the future, the Angara-1.1 and Angara-1.2 . The leading developer and manufacturer of the complex is GNPPRK TsSKB-Progress (Samara).

The spacecraft for scientific purposes "Stork" was developed by students, young scientists of the Samara State Aerospace University named after S. P. Korolev and specialists of the State Scientific and Practical Center "TsSKB-Progress".

It provides testing of geomagnetic field measurement and low-frequency microacceleration compensations, conducting research related to reducing microaccelerations to a minimum level, studying high-speed mechanical particles of natural and artificial origin, and receiving, storing and transmitting information about the work of scientific equipment to Earth.

Together with this satellite, it was planned to launch two radar calibration spheres for the needs of the Ministry of Defense into orbit.