2013: the year when Russian diplomacy rose to the Grand Master level 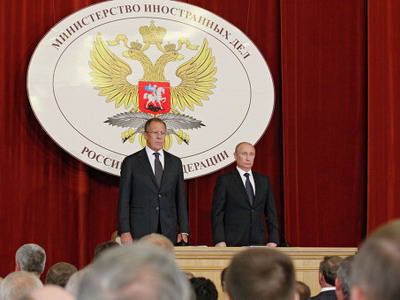 Geopolitics are sometimes compared with a game of chess. And the globe is a kind of a huge chessboard. If we start from these comparisons, US President Barack Obama had an unpleasant year. His colleague, Russian President Vladimir Putin, on the contrary, is brilliant. Let's look at the scoreboard. Earlier this year, Obama’s activities in the Middle East revealed his weakness and indecision as the “commander in chief” of what he did in the case of Syria. His dodging with the so-called warning red line, which cannot be crossed, is a vivid example of this. Waving America with a saber, which in the end could have resulted in another regional war, turned out to be a “dampened petard”. Fortunately, the fire was prevented by Putin’s competent diplomacy.


His highly courteous and skillful foreign minister, Sergey Lavrov, deftly took the initiative from the Washington instigators of the war, known as "neo-conservatives." His team convinced (using, without doubt, strong arguments) the Assad regime to submit to the demands of the “international community” to abandon all their chemical weapons. Now, before continuing to pay tribute to Russian diplomacy, it is worth mentioning a couple of failures. For example, Moscow’s inability to curb one of its main client countries is North Korea. Her strange behavior, both within borders and throughout the region, continues to threaten stability in the Far East.

Nevertheless, returning to the positive aspects, Russia also plays a constructive, if not a key role in the fact that Iran puts its nuclear program on a halt. The deal has already been signed, despite the concerns of Israel and the insulted cries from the US Congress. With all its intentions and goals, Moscow still plays an important role in preventing a war between the West and Iran. Another feather in Lavrov's hat ... Bravo!

For most of the year, Obama, for his part, has functioned in emergency mode since Snowden’s revelations about the US National Security Agency’s spying giant American surveillance vehicle spying on US citizens and US allies became known. The affair with the NSA caused incalculable damage to transatlantic relations, and especially with the closest European ally of the United States - Germany. In Berlin, where Obama was once regarded as a superstar and almost a demigod, now he is not trusted, if not despised. Putin, on the contrary, shines in the international arena. By this is meant his meeting with the "Man of the Year" by the version of Time - Pope Francis. Who knows, perhaps, if Putin continues to do so, then next year he himself may be nominated for "Man of the Year."

In this vein, it seems that the main people of the Kremlin and the Vatican have more in common than you might think. This refers to their ability to restore faith in their roles and the departments under their jurisdiction, which they represent, and which may have been discredited by past wrongs (abuse of power and human rights violations) and morally damaging actions.

Finally, the recent amnesty granted by Putin to a dissident and other “headaches” of the Kremlin turned out to be a source of light advantages in the absence of minuses. The release of Mikhail Khodorkovsky, members of the Pussy Riot rock band and Greenpeace activists turned out to be successful and timely, on which Putin will earn a certain moral capital on the eve of the Olympic Games in Sochi. No matter what Putin’s critics are trying to expose this move as a cheap trick and an attempt to cheaply earn public sympathy, this decision is no doubt another success of his presidency.

The ball is now on the side of Washington. Will President Obama be up to par and show mercy towards those whom he considers traitors or enemies of the state? Does he give presidential pardon to former ANB Snowman and Wikileaks informant Bradley Mannig? Something suggests that the time flowing from Obama’s second presidency could answer this question. In other words, it could happen earlier than one might think.