Science to win by Mikhail Kalashnikov 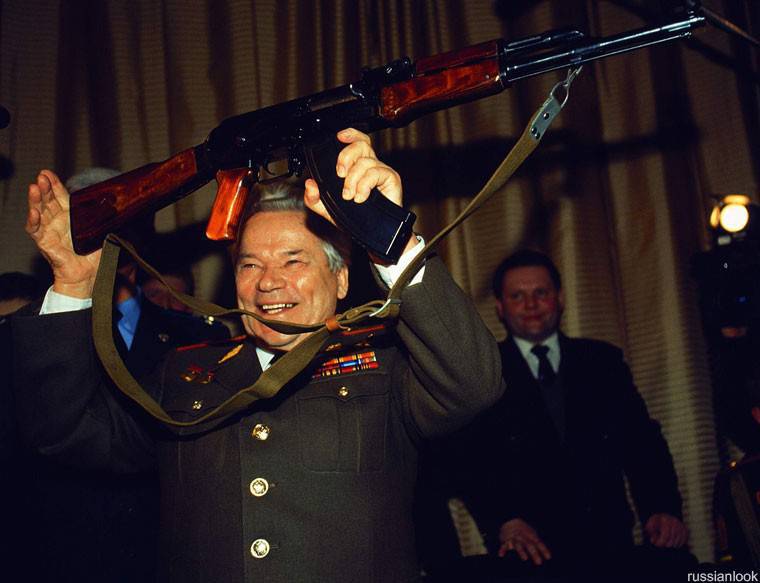 “I’ll tell you that weapons, like our women, need beauty. You need to ask for it yourself. You look - my first submachine gun, it is on the posters - I have it most beautiful. It’s probably how a mother gives birth to her first child and believes that he is the most worthy. "

“My weapon is now considered unsurpassed. I say to all designers of the world:“ I will first shake hands with the one who will do better. ”But for now, I am standing with an outstretched hand.

"The designer - he has to think about something all the time. My products have been known to the whole world for a long time, but this does not mean that one should stop and not think further. The designer has to work all his life. I follow this idea."

“I wrote poetry at school and everyone thought that I would become a poet. I even wrote plays that were staged at school. But I didn’t become a poet, and I think that's right. Without me, there are so many bad poets. I followed another the road. "

“When the war began, I was called to the front and saw that the German soldiers were almost all with automatic weapons, and in the first days of the war we had one rifle for two. I was excited to create a submachine gun myself. And when 1941 I, seriously wounded, was in the hospital, I was tormented by nightmares at night. I got a notebook, a pencil. When I woke up at night, I tried to imagine: what kind of machine gun would I make a pistol? In the morning I took a notebook from the nightstand, made sketches. kind of self-defense - not only the night visions were forgotten, from there was a daytime pain — and my first design experience. "

"Of course, like every person, there is something to regret ... But one thing I can say: I would not live my life differently if I had the opportunity."

"I have a very difficult road, but good people have always met there. It’s like angels from heaven."

M. Kalashnikov about labor and recognition

“Once, Yeltsin presented me with a prize pistol. I went to Moscow, to the Kremlin. In the box - a Makarov pistol. I looked at the hotel - oh my God, what this country president gives me such a shaky, loose sample. It's not a reward, but a shame. I was upset, I write to the premium department: “I will return this sample to you, it only humiliates us, I know what the premium weapon should be.” There they all immediately ran, the calls went: “Yes, you put gold and silver on this pistol, and so on. "I said," Don't, I’d better describe all this in my book. "

"You can’t measure everything with money. For me, the most precious thing is when people say:" Your weapon saved my life! "Why do I need millions? I already live well."

"The most important award is, of course, the one, the Stalin Prize, which I received for AK-47. That joy, probably, cannot compare with anything."

"When in 1947. My model of the machine gun was adopted, it was happiness for me. When I was awarded the Stalin 1 premium, it was also happiness. It is made up of trifles."

“I invented a weapon not to kill people, but to protect my Fatherland. I am often asked:“ How do you sleep, because so many people from your machine gun were killed? ”And I say to that:“ My dream is excellent. Let politicians who start wars sleep badly. "And the designer is not to blame."

"I think the dream of all people, including mine, is peace and harmony on Earth, peace and happiness of compatriots, and we, the designers, will always have a job. I love nature, forest, birds, animals. If it happens that the military the designers will not be needed, I will take photos and I will try to shoot them no worse than our machine guns. "

"In my 90 years, I feel like a happy person. But I still have a dream. Not for myself, for our country. I want a moral revival to happen, to raise the level of culture, to make people better. I have something to compare with. I survived wartime - in all, one might say, incarnations. But even during the war years - very hard, full of hardship, when everyone was starving, losing loved ones - people treated each other better than they do now. And I want them to return those normal human relationships. "

Ctrl Enter
Noticed oshЫbku Highlight text and press. Ctrl + Enter
We are
Commentary on A. Petrov's interview “Fire and Tactics in the Russian Army: Another Look”
Military Reviewin Yandex News
Military Reviewin Google News
35 comments
Information
Dear reader, to leave comments on the publication, you must sign in.