Under the sign of the North Star. Warships in the Arctic 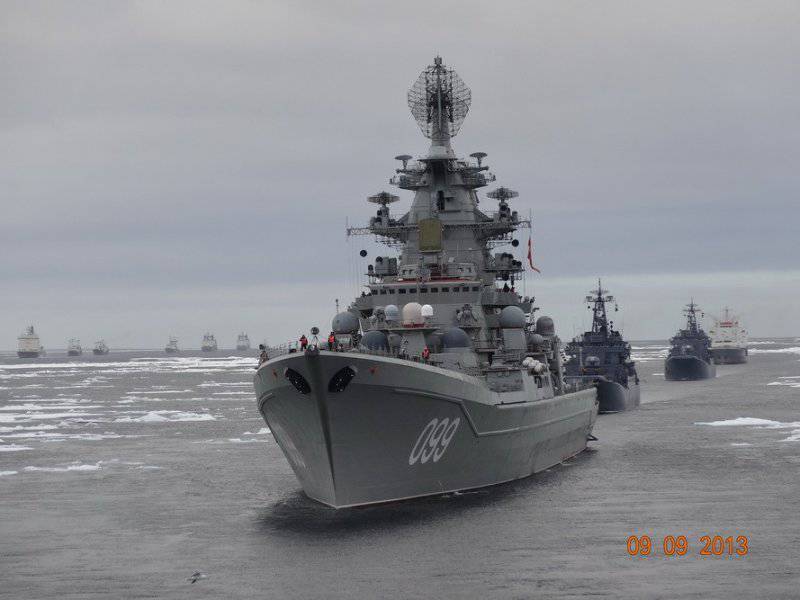 A place where a person without special protective equipment dies in a few minutes. This is not the surface of the moon or distant Mars. This is the beloved Arctic of all - a territory extending above 66 ° 33 ′ s. sh. (Arctic Circle) and favorably differing from the rest of the Earth by a negative average annual temperature. In this case, under the "special protective equipment" understand the most insulated clothing and indoor areas with a mandatory source of heat.

As you know, a man in his original form is able to spend several days behind the ship and calmly transfer the air temperature above + 50 ° C. But in the Arctic, such tricks will not work. This place is more dangerous than the Sahara and the Californian Death Valley, taken together, is one careless step in the frosty mist, and the cold will turn the brave fellow into a ram's horn. In the morning, the comrades will find only a stiff mummy with forever bent limbs.

“The country of icy horror” - this was how the Norwegian Fridtjof Nansen described the Arctic after many years of expeditions in these parts.

An unavoidable obstacle to the development of these places is an endless winter night (the duration of the polar night depends on the latitude).
When the edge of the sun disk flashes again in the southeastern side of the sky, and the snowy landscape of the hills lights up with a soft pink light, the Holiday of the Sun is celebrated in Murmansk. Residents of Moscow and the Kuban do not understand why they are so happy in the thickened twilight of 300 thousands of lucky people - inhabitants of the world's largest city, built beyond the Arctic Circle.

The Arctic was not intended for human habitation. As if nature itself cursed this place, forever holding down the earth and the ocean with a layer of ice-resistant rock. Monotonous snowy landscape and endless night - among the polar explorers go mystical legends about the "white noise" and "call of the Polar Star". A strange mental disorder, known among the coast-dwellers as "meryarenie" - a person loses his mind and runs into the icy desert. According to legend, the unfortunate always run strictly north.

But no matter how harsh these northern territories are, they belong to us by right. Paraphrasing Admiral Essen: “We have no other waters. We will have to use these. ” And if so, the Russians had to master this unfit living area and learn to extract the maximum benefit from it.

The main treasure of the Arctic today is the Northern Sea Route (NSR) - a strategic transport route on the way from Europe to Asia; historically established national unified transport communication of Russia in the Arctic, stretching along the entire northern coast of the Urals, Siberia and the Far East.

Fighting for the Arctic Ocean

The length of the sea borders of the Russian state - 38 808 kilometers! Of which 19 724 km pass along the coast of the Arctic Ocean: the Barents, Kara, Laptev, East Siberian and Chukchi seas. Year-round navigation without icebreakers is possible only in the Barents Sea, off the coast of the Kola Peninsula - where the warm Gulf Stream warms the water and air, driving the ice far to the north. And then begins the “country of icy horror” - all ports of the Northern Sea Route, with the exception of Murmansk, work on 2-4 months of the year - during the summer-autumn navigation.

An obligatory attribute is the icebreaker fleet - contrary to the widespread statement about “the longest sea frontiers”, Russia de facto is the owner of the longest ice borders in the world. Multimeter pack ice covers us from the north direction more reliably than any Coast Guard and navy. With all the advantages and disadvantages.

The unique Arctic campaign of warships of the North fleetheld in September of the outgoing year, still raises mixed opinions: domestic and foreign analysts have expressed doubts about the advisability of the presence of the Peter the Great nuclear missile cruiser in high latitudes. To the question of whether such operations were previously conducted using surface warships, the former commander of the 5th Mediterranean Operational Squadron, the head of the Main Staff of the Navy, Admiral Valentin Selivanov answered directly:

No, we had nothing to do with it - just waste time and money. Ships go to sea or to combat training - the closer their range, the more economical and easier it is, or to combat service in the area of ​​potential contact with the enemy. On the Northern Sea Route, the enemy never existed. We had no reason to send ships there.

TARKR "Peter the Great" was created as a hunter for the convoys and ship groups of the enemy, but it is absolutely impossible to imagine the US Navy aircraft carrier group in the Kara Sea. First, for her there are no tasks. Secondly, the US surface fleet is categorically not adapted for operations in the Arctic.

The last time an enemy appeared in these waters during World War II was in August 1942, the heavy cruiser Admiral Scheer broke through to the Kara Sea. As a result, the raider was unable to catch up with the convoy on the way to the Velkitsky Strait - when Soviet ships and icebreakers crawled at 5 speed knots., The Germans hardly gave out 1-2 knots. Arctic nature turned the sea battle into a farce. 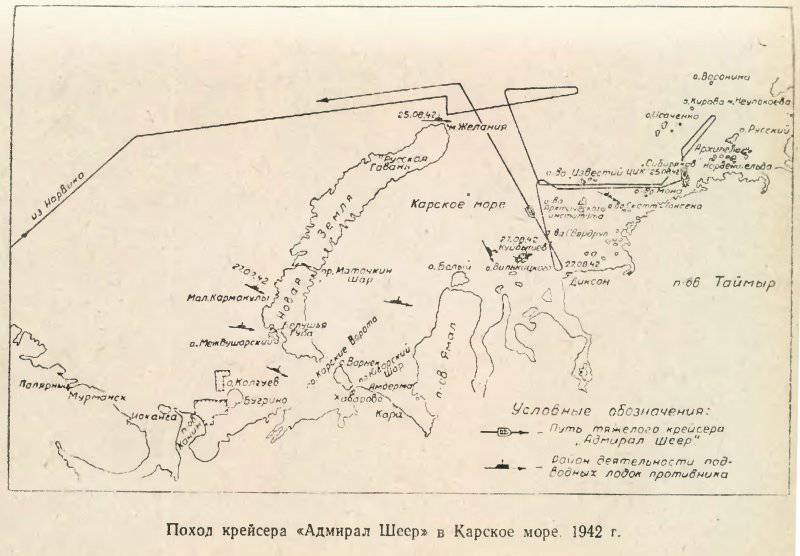 After wandering around the Kara Sea, the cruiser sank the icebreaking ship Sibiryakov in an unequal battle, unsuccessfully fired at the port of Dickson and retreated. The Germans did not dare to risk a super-ship for such useless results.
But that was then. Now things are different.

The uniqueness of the Arctic campaign 2013 of the year was that all the nuclear surface ships of Russia (the Navy cruiser and four icebreakers of Rosatomflot) participated in the operation.

It is impossible to remain indifferent to the view of the icebreakers “Yamal”, “Taimyr”, “Vaigach” and “50 Years of Victory” wading through the ice - power that knows no boundaries! These magnificent cars will pass where any other ship will get stuck forever and will be crushed under the onslaught of heavy ice. In 2013, the icebreaker “50 Years of Victory” celebrated a fantastic anniversary - it reached the North Pole for the hundredth time. These ships have unlimited autonomy for fuel reserves, a long-term supply of food on board, carry aircraft, the latest navigation and communication systems, and have the ability to destroy ice more than 2,5 meters thick. The true rulers of the Arctic - they are able to penetrate into any area of ​​this icy world. 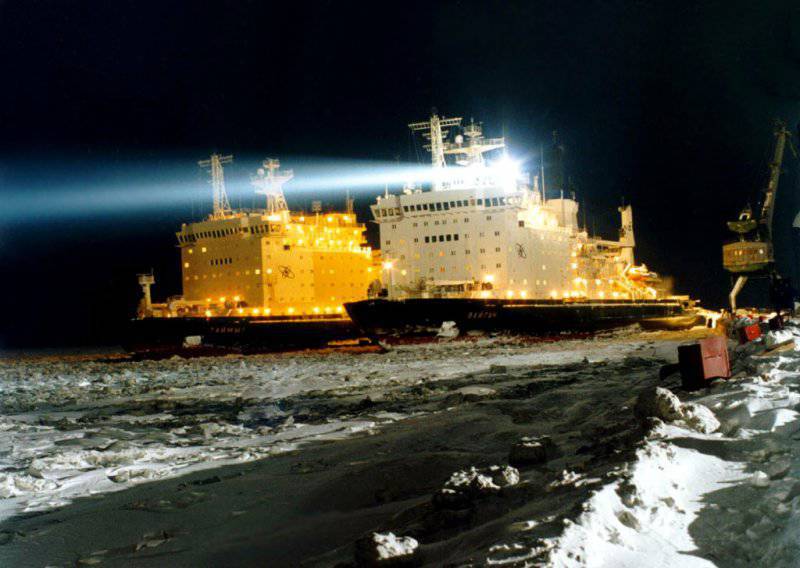 "Taimyr" and "Vaigach". Handsome!
However, four icebreakers are a reason to think. To escort three warships and seven support vessels (TARKR Peter the Great, landing ships Kondopoga and Olenegorsky Miner, rescue tugs, medium sea transport and tanker) - the entire icebreaking fleet of Russia was needed to lead such a caravan to the coast of the Novosibirsk Islands ! Given that the campaign was carried out in the ideal time of year - the beginning of September, the height of navigation. When daytime air temperatures exceed 0 ° С, and the southern edge of pack ice moves far to the North.

No doubt, in the last decade, sailors have noted the simplification of the ice situation - at the beginning of the XXI century there were precedents when during a single navigation of the Northern Sea Route single ships passed without icebreaker escort. Pictures from space confirm the situation - the area of ​​ice in the Arctic has noticeably decreased.

But ... it was only to turn from the usual route - take a little to the north, in the direction of Fr. The boiler room (the Novosibirsk Islands archipelago), - and immediately needed the help of four nuclear-powered icebreakers! 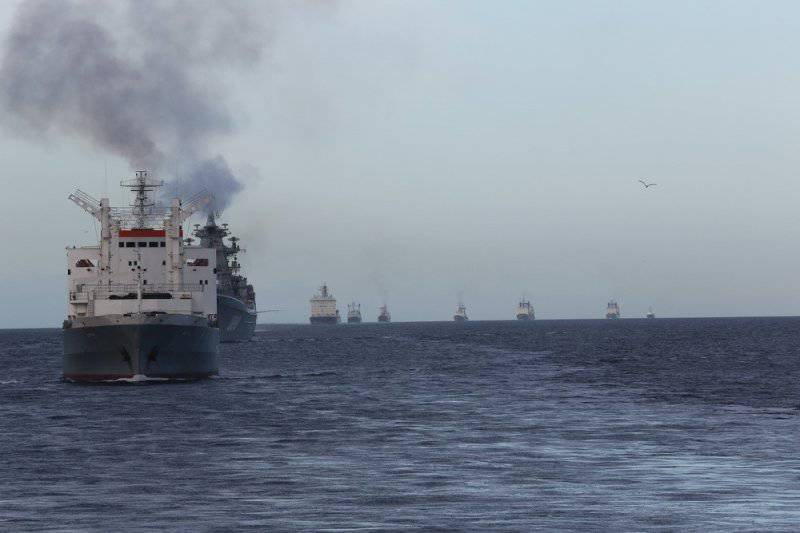 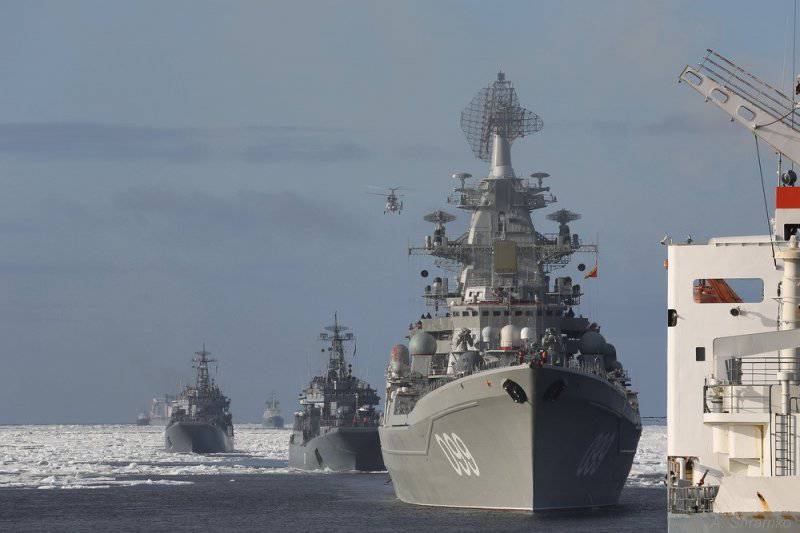 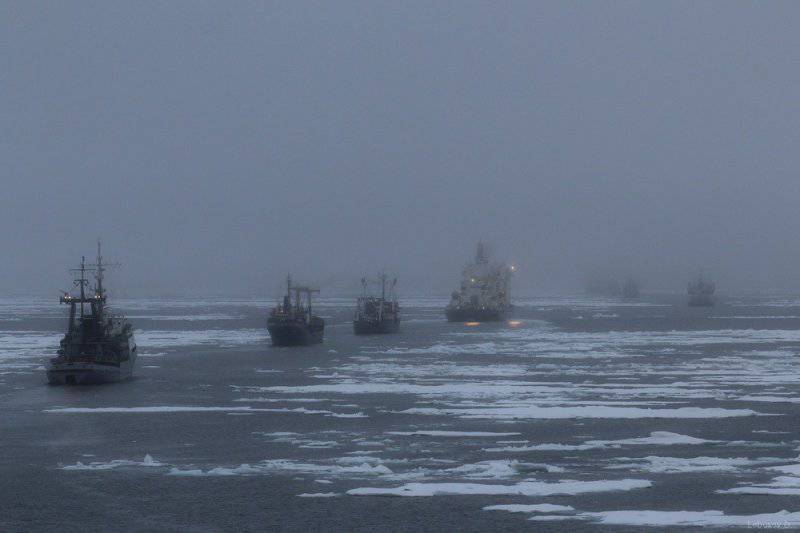 Naive Canadians still hope that the melting of the Arctic ice will become irreversible - even a little bit, and the north-western passage in high latitudes along the northern coast of Canada will open. Direct competitor of the Russian SMP!

Hell no. The myth of global warming is a global deception - unscrupulous scientists and experts who exploit this hypothesis are not inclined to tell the whole truth. The amount of ice in the Arctic has really decreased. But at the same time, the ice shell of Antarctica, on the contrary, increased in thickness and size. The cycle of substances in nature!

It seems that we are dealing with some unexplored cyclic process between the northern and southern hemisphere - it is possible that in a few decades the Arctic will begin to drag on with ice again. Sweet dreams of banana palms on Franz Josef Land and arguments in the form of oil reserves on the Arctic shelf (100% evidence that lush tropical forests grew millions of years ago) should not lead the average man astray. It was hundreds of millions of years ago. And it will not happen again very soon.

We live in the coldest epoch in stories Land - all the fault of Antarctica. If on the place of ice-covered land in that place there was the Southern Ocean, then the climate on Earth would be fundamentally different. Antarctica is cooling the Earth, serving as an excellent reflector of sunlight and the storage of huge stocks of ice. Alas, we will not see any palm trees in high latitudes until this damned “refrigerator” crawls to another place, obeying the eternal movement of lithospheric plates.

In the meantime ... ships make their way through the cold water along the coast of Russia. The icebreaker leads a caravan - despite the broken, discharged ice, the crew activates the air wash system (POU - is used to reduce the friction of ice on the hull). This allows you to maximize the channel astern of the icebreaker and to facilitate the movement of ships and vessels in the wake of a wake. Without knowledge of such subtleties in the northern seas can not survive. 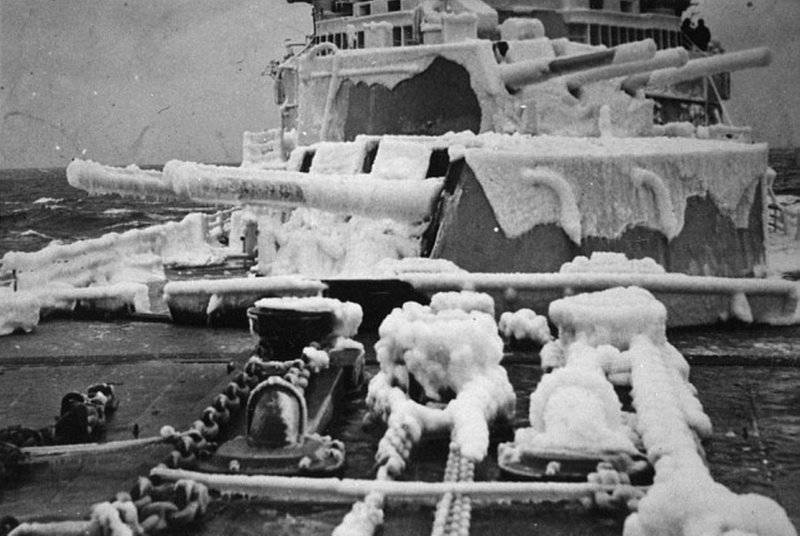 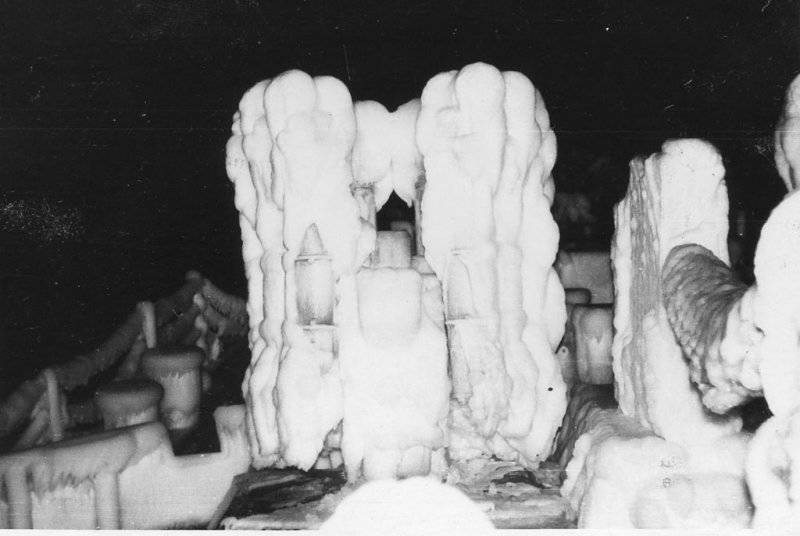 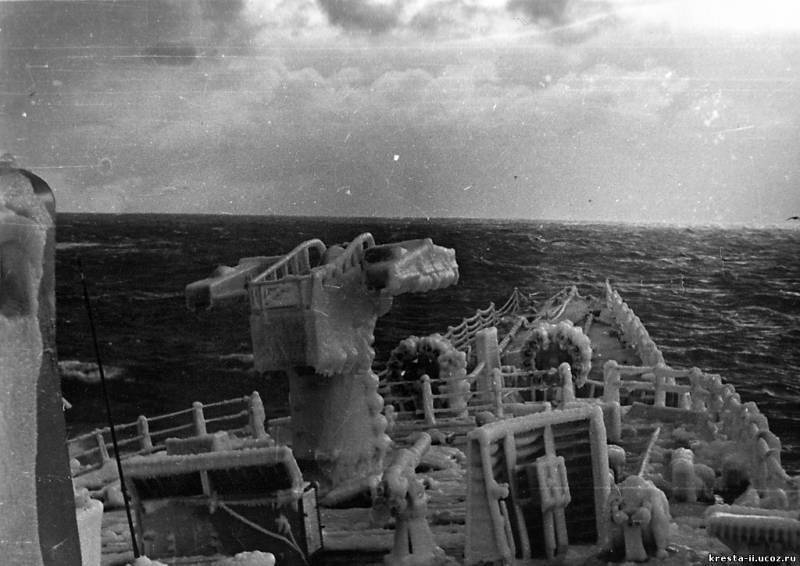 Ice-covered BOD "Admiral Yumashev"
The use of a squadron of surface warships in the Arctic presents considerable difficulties: the ships are constrained in maneuver. Such an unpleasant process as the icing will be an additional gift for trespassers of the northern waters. A terrible thing, during bad weather and a storm, it can in two accounts deactivate a ship, chaining all launchers, tools and radar with indestructible chains. Polar night, changeable weather, disgusting visibility - the rule rather than the exception for those latitudes. Obviously, even with assistance, in the form of nuclear-powered icebreakers, cruisers and destroyers (not to mention the Mistral) have absolutely nothing to do in the Arctic.

And yet there is single class warshipsable to challenge the primacy of nuclear-powered icebreakers in the fight for the title of Master of the Arctic. 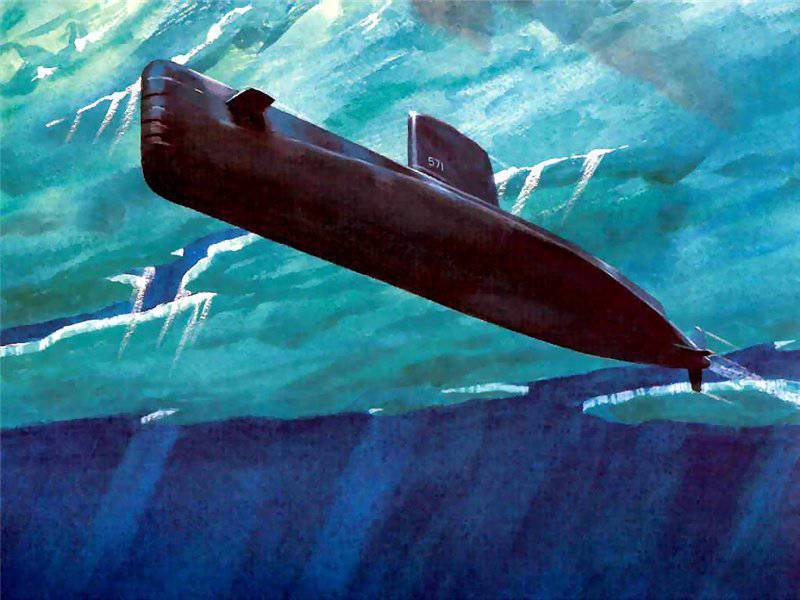 The Nautilus was the first ship to reach the North Pole, 3 August 1958.
Black sleek submarines that rush to the North Pole without encountering any resistance. Nuclear submarines do not pay attention to the field of impassable pack ice, they are not afraid of the most severe frosts and polar blizzards. They do not suffer from icing and poor visibility. They are powerful, fast and able to navigate the Arctic Ocean at any time of the year.

Ice, on the contrary, is an ideal cover and protection for them - no aircraft can set up a sonar buoy or drop a torpedo. And no anti-submarine ship will be able to keep up with the submarine in those latitudes - it will firmly get stuck in the ice, without the ability to apply its weapon.

If necessary, the underwater acoustics will prompt the crew for the presence of ice-hole or ice of suitable thickness: the submarine will gently press against the inner surface of the ice, blow through the tanks and - voila! - scattering blocks of broken ice, rises to the surface. In this sense, the giant “Shark” was the most spectacular: thanks to its size, the heavy SSBN of 941 Ave could destroy the ice of two meters thick with its cabin! 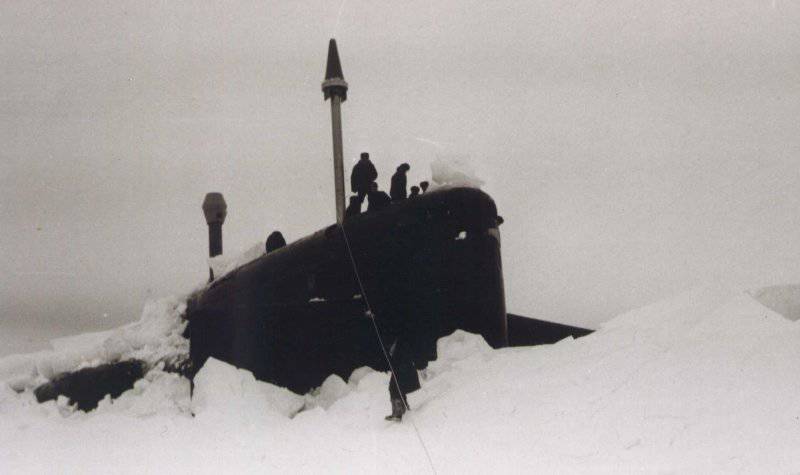 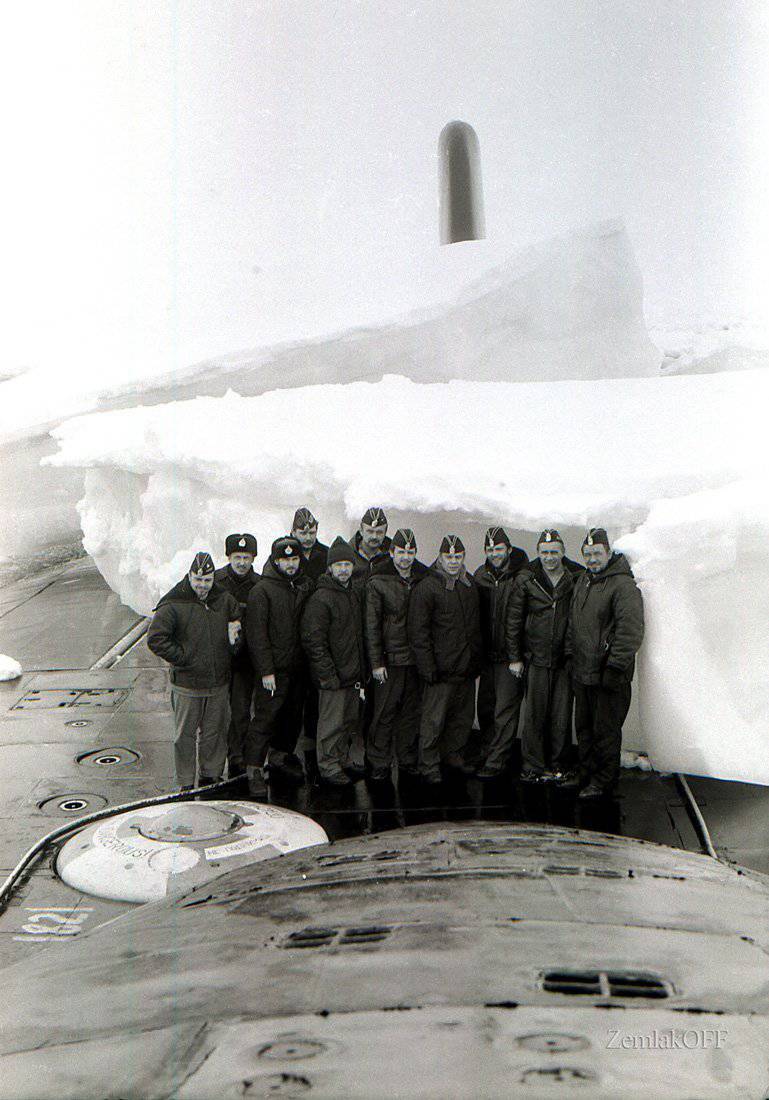 Photos of the squadron of the Russian Navy in the Arctic - http://pavel-vish.livejournal.com