Myths about the future incapacity of the Eurasian Economic Union

December 30 2013
140
The Eurasian Economic Union (abbreviation - EEC) is a future union of sovereign states, based on a single economic space with supranational authorities and the possible use of a common currency. At this stage, the main integration processes within the framework of the future UES concern the Russian Federation, Belarus and Kazakhstan. It is planned that the organization will take effect from January 2015 of the year and by that time (and subsequently) can expand due to the adoption of other states - in particular, Armenia, for which the so-called “road map” for joining the Customs Union, which is a kind of on entering the EEC.


From the first days of the emergence of the idea of ​​creating the Eurasian Economic Union and from the first steps to translate this idea into reality, the waves of criticism of the future union began to grow. And the waves rolled in both from the inside of those states that were on the path of economic integration, and from the outside. The main theses of criticism of the “conception” of the Eurasian Economic Union can be divided into several, let's say, thematic groups.

The first group (from the internal Russian opposition environment): The UES is created by Vladimir Putin under himself in order to prolong his presence at the helm of power in Russia indefinitely and, if possible, to extend this influence to the post-Soviet space.

Group Two (from certain representatives of the Belarusian and Kazakh public): The EEC is being created so that Russia can absorb the sovereignty of Kazakhstan and Belarus, turning these countries into analogues of the constituent entities of the Russian Federation and exerting hard pressure on them.

Group Three (from Western "friends"): The Eurasian Economic Union is a new version of the USSR, which is created by "authoritarian-totalitarian" politicians, and therefore, the very fact of such a creation is aimed at potential aggression against "world democracy" and the formation of a new threat to " progressive "West.

Over time, these theses began to complement each other, actively cultivated in the “right” press with the presence of far-reaching conclusions about the “demonic” essence of the future Eurasian Union. Particularly impressionable citizens (both inside the future single union space and beyond), on the basis of the materials presented by that very “right democratic” press, have begun to even think. Speculation on the basis of played out imagination took shape into whole pictures about how hard it will be for them to exist “under Putin’s oppression” in “deprived of independence” countries, and even with the “growing threat of progressive and flourishing Western democracy.” From such a “horror”, many began to experience pressure spikes, loose stools, and then an ambulance, hospital, pills, injections, reports in their own blogs ...
But either in vain the above mentioned liquid stool, or something else prevented people seeking to find a reason to criticize the very idea of ​​creating a Eurasian Economic Union, to approach the issue of what is called a cool head. It prevented that far from every adherent of the criticism of the EEC wants to look at the situation from different angles and, most importantly, not everyone is ready to give an unequivocal answer to the question: what, the Eurasian Economic Union is a unique precedent on our sinful planet?

In fact, the mentioned adherents of criticism of the formation of the EEC are in the majority perfectly aware that there are many such unions on the world map, that each of these unions is distinguished by one or another efficiency and one or another set of aspirations of its leaders. Moreover, alliances of this kind exist on almost all continents, often (to a certain degree) intersecting with each other.

Let us give one example: an example of the current (and at the same time being formed) union today, which debunks the myth of the future incapacity of the EEC.

UNASUR (aka UNASUR or the Declaration of Cusco, aka the Union of South American Nations). The union includes the countries of the so-called Andean Community (Ecuador, Bolivia, Peru and Colombia), the countries of MERCOSUR (by the way, another territorial and economic supranational entity), as well as Chile, Guyana and Suriname. The mentioned MERCOSUR (economic and political agreement between certain countries of South America (Brazil, Uruguay, Paraguay, Argentina, Venezuela) with the release of a common market). 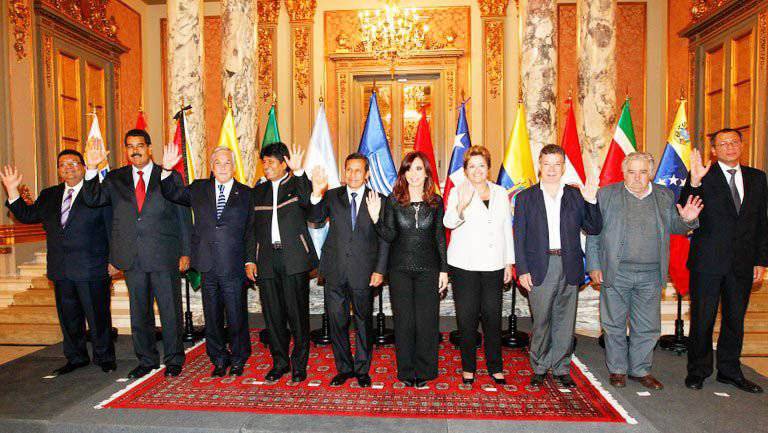 The legal birth of UNASUR, the South American political and economic union organization, took place in December 2004. In less than four years, a unified defense council was formed, and the formation of a single parliament of UNASUR began almost simultaneously. Two years later (in 2010), the officially elected head of the union, the secretary general, appeared at UNASUR. Then Nestor Kirchner (ex-president of Argentina) became the general secretary. To date, Ali Rodriguez Araque (Venezuela) is the General Secretary of UNASUR. The existence and activities of the Union of South American Nations is based on the 2004 Declaration of the Year and the 2008 Constitutional Treaty of the Year.

Since the advent of the UNASUR Constitutional Treaty, more than five years have passed, for three years the Union has elected heads (secretaries-general), two main political centers have been chosen - in Bolivia and Ecuador, and in fact none of the countries in UNASUR has lost sovereignty, nor slipped into economic dependence on other states of the Union. None of the countries have stated that one of the presidents of another country wants to usurp power, turning all other countries of Unasur into markets and raw materials appendages. The work is carried out quite calmly, the outlined plans are being carried out, the political centers are working according to the established regulations, trade is going on, the economy is growing.

If we talk about the growth rates of the economies of individual countries of the Union of South American Nations, then such growth, for example, in the European Union (another political and economic education on the world map) could only be envied.
Economic growth in Uruguay from 2008 in average annual terms is 5,9% (as a result of the global crisis in 2010, the economy of this country showed Unasur results in 8,9%!). The average annual growth of the Venezuelan economy over the same period was 2,1%, Bolivia - 5,1%, Suriname - almost 4%, Chile - about 5,5%. The list of Unasur states with a rather noticeable economic growth (in comparison with the same European Union, dancing near zero) can be continued further. The volume of mutual trade after the beginning of the work of UNASUR (since 2004) with the simultaneous removal of bureaucratic barriers has grown almost 3,5 times! GDP per capita increased from 2008 to 14%.

In Ecuador, they do not shout that Brazil will swallow up its economy, Chileans are not outraged about why the political center is chosen in Bolivia, the Suriname press does not go under the headings “Venezuelan Secretary General - a blow to Unasur” ... Yes, and the so-called West does not splash poisonous saliva about democratic values ​​", even aware of the fact that a collective defense system is being built in South America ... He would probably have sprinkled, but only all this poisonous saliva for Unasur is puff, through which you can safely step over and continue working integration of the South American continent.

So why does building a Eurasian Economic Union cause such a fever in certain circles? Why are excessively “heated” segments of the population of Russia, Kazakhstan and Belarus sure that someone inside the future EEC will surely absorb someone, economically crush and politically trample? Well, the West can be understood: forgive, Lord, “partners” are not at all profitable for the supercompetitive (both economic and political) to be revived in the post-Soviet space, but what confuses us? .. Or the idea of ​​further disunity and fragmentation, fed by phobias about the tug of a blanket over yourself by some of the politicians, better than the idea of ​​civilized economic integration? ..

Ctrl Enter
Noticed oshЫbku Highlight text and press. Ctrl + Enter
We are
Day of the Armenian army. How the armed forces of Armenia were formed and developedYerevan Maidan: who is shaking Armenia?
Military Reviewin Yandex News
Military Reviewin Google News
140 comments
Information
Dear reader, to leave comments on the publication, you must sign in.