Dark forces evilly oppress us: the case of the Turkish government

December 30 2013
15
A loud corruption scandal shook the Turkish government. R.T. Erdogan has already begun to give advice to the commissioners, and the Turkish people took to the streets and demanded the resignation of the prime minister: he is considered the main corrupt official. It all started with an anti-corruption operation, called the Big Bribe, which had been secretly prepared by the government for a whole year. The threads of the police investigation reached up to eight dozen high-ranking officials or their relatives. The sons of the Minister of Economy of Turkey, the Minister of Ecology and Urban Planning, and, as usual, the head of the Ministry of Internal Affairs were implicated in the scandal. 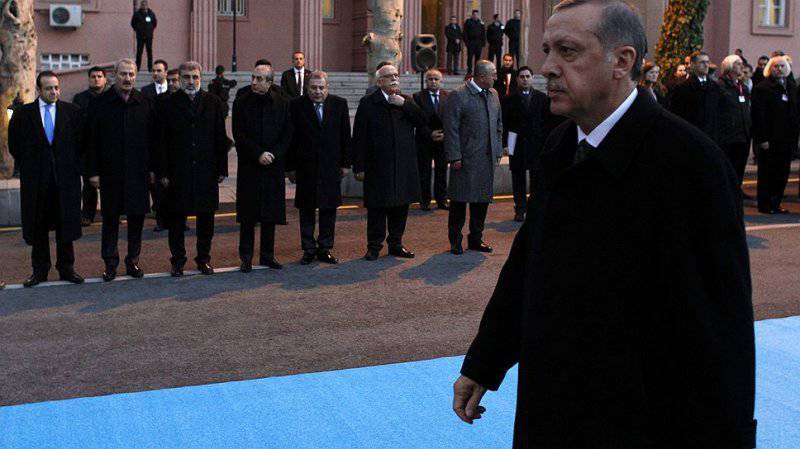 Corruption charges were brought against sixteen key figures in the high-profile December 21 case. In addition to the sons of government officials, the police during the anti-corruption operation became very interested in the activities of the chairman of the state-owned bank Halkbank, who found 4,5 million dollars in cardboard boxes at home, and the directors of several large construction companies. We are talking about embezzlement, frauds with state tenders, money laundering, embezzlement, gold smuggling, complicity in the extradition of Turkish citizenship for bribes and smaller crimes. As part of the case 52 man was detained.

Prime Minister Erdogan, a famous autocrat, reacted to the police investigation and the trial is quite predictable. Once the investigators went against the Cabinet, Erdogan took and dismissed all the major police officers who headed and conducted the investigation of the high-profile case. Some senior executives at MIT and JITEM (special services) also lost portfolios. Layoffs or transfers to other positions have also affected smaller employees. Total press writes about about six dozen officers - laid off and transferred. According to others, the flywheel of repression threw into the street a total of five hundred police officers of different ranks - all those who were involved in the scandalous operation.

The very thing the prime minister announced was an attempt to discredit the government. Moreover, according to his old habit, the prime minister turned to conspiracy theories: he declared that “some circles”, “international groups” and even “dark forces” were acting against him. Collectively, these circles, groups and forces representing Turkey’s “enemies” (including the “internal” ones, consolidating with the “external”, which are foreign ambassadors in the country), conduct “very dirty operations” and create a “state within the state” ". The premiere was immediately poddaknuli biased "analysts", declaring that for the anti-corruption campaign are viewed some "external forces". Their task is to weaken the strong position of Erdogan’s party, the Justice and Development Party. Why are they activated now? And because in the country in three months - elections to local authorities, and then presidential.

He named R. T. Erdogan and the main foreign enemy who started destabilizing the situation in Turkey. This is an Islamic preacher, businessman and writer Fetulla Gülen, who has been registered since 1999 in the USA. Gülen’s public movement is called Hizmet and enjoys great influence in Turkey; it has many supporters in the Turkish special services. Gülen, of course, denies these allegations. He considers the Prime Minister to be an autocrat and the main culprit in the disintegration of the state apparatus. The picture is clear: while Erdogan blames Gülen, Gülen blames Erdogan. And if the statements of the prime minister about “dark forces” and “enemies” may seem funny, then Gulen may rely on the results of the investigation and on the response actions - namely authoritarian - of Erdogan. As a result, the authority of Gulen grows, Erdogan - falls. And yes, elections are coming soon.

In principle, Gülen has a fairly wide field for critical attacks on the premiere. Geopolitical. The Turkish Prime Minister "did not grow together" with the EU, despite a number of attempts. In addition, R.T. Erdogan, who actively supported opposition militants in Syria, received as a result a huge number of refugees and the strengthening of Kurds on the border. Finally, the premier’s construction activities gave rise to large-scale protests: the people spoke out for the preservation of the Gezi Park, which Erdogan dreamed of turning into a roadway and a shopping center. Demonstrators' demands quickly grew into political ones. The demonstrations were dispersed in the spirit of autocracy - by force, gas and batons - which, of course, was not approved in Brussels. And in those protests, the prime minister blamed some external forces.

And, finally, Erdogan’s current decision to dismiss senior police and intelligence services to the authorities of the European Union seemed, to put it mildly, biased.

On December 27, the European Commissioner for Expansion, Stefan Füle, in an official communiqué demanded a transparent and impartial investigation into the corruption case from Turkey. As you know, Ankara has long been torn in the EU, but the EU is set up for it somehow very bureaucratic. And Füle pressured Erdogan on a callus, saying: “I urge Turkey, the candidate country to join the European Union, to take all the necessary measures so that the allegations of corruption are treated impartially, and thus a transparent investigation was conducted.”

The European Union fears that the Erdogan government influences the actions of the judicial branch of government, which does not fit into the framework of a democratic state. (By the way, in the EU this opinion is not alone. Three Turkish deputies, members of Erdogan’s party, came out of it in protest, publicly announcing that the party is obstructing the anti-corruption investigation.)

Erdogan also answered predictably to the European "pointers". In addition to the resignation of the three above-mentioned ministers, as well as the ministers of justice, transport, family policy, sports, industry, and even the vice-premier, he removed Egemen Bagysh, the minister for EU affairs, from his post.

Thus, ten ministers were fired — and other figures took their place.

New Minister of the Interior was appointed Deputy Chief of Staff of the Prime Minister Efkan Ala.

Together with ministers and police officers, the chair and prosecutor Muammer Akkash lost the seat. His Erdogan removed from the investigation. According to the prosecutor, the Turkish leadership is obstructing the investigation of the corruption case and pressure is being put on the judicial system.

The Turkish economy reacted to the scandal. In the media they write that the stock exchange in Istanbul is in a fever, the rate of the national currency has declined markedly, Turkish banks are experiencing a crisis of distrust. In addition, the Turks began to be purchased in dollars and euros. The state bank Halkbank has already received less than a scandal of 1,7 billion dollars in profits. Bear losses and other banks. The crisis can strike not only in the banking sector, but also in industry: after all, large construction companies are also involved in the scandal.

The people took to the streets with protests. People were met with tear gas, rubber bullets, in some places (for example, in the center of Istanbul) - water cannons. Unrest took place in six cities, but the actions can be called few: only a few thousand people spoke out against the Erdogan government. Waves of protests, similar to the one that rose after construction, started in the park Gezi, was not. It can be assumed that the Turks are already tired of protesting; In addition, people's fear of totalitarian methods of dispersing demonstrations is also evident: brute force and arrests.

That's what they say people on the streets of Istanbul:

“I believe that they are completely mired in corruption and I think that all these permutations are meaningless. It seems to me that the head of government should resign. People are already tired. Everyone feels down. And these new appointments will not reassure the people. ”

“I’m partly on the side of Erdogan, but on the other hand, if you are trying to hastily change the legal system, then it will hit you. He himself gave the police its current powers, so he should not complain. "

Well, what can be added to this ... For what they fought, they ran into it!

Ctrl Enter
Noticed oshЫbku Highlight text and press. Ctrl + Enter
We are
Projection of forceSituational analysis of the death of the MH17 flight (Malaysian Boeing 777), made on the basis of engineering analysis from 15.08.2014
Military Reviewin Yandex News
Military Reviewin Google News
15 comments
Information
Dear reader, to leave comments on the publication, you must sign in.