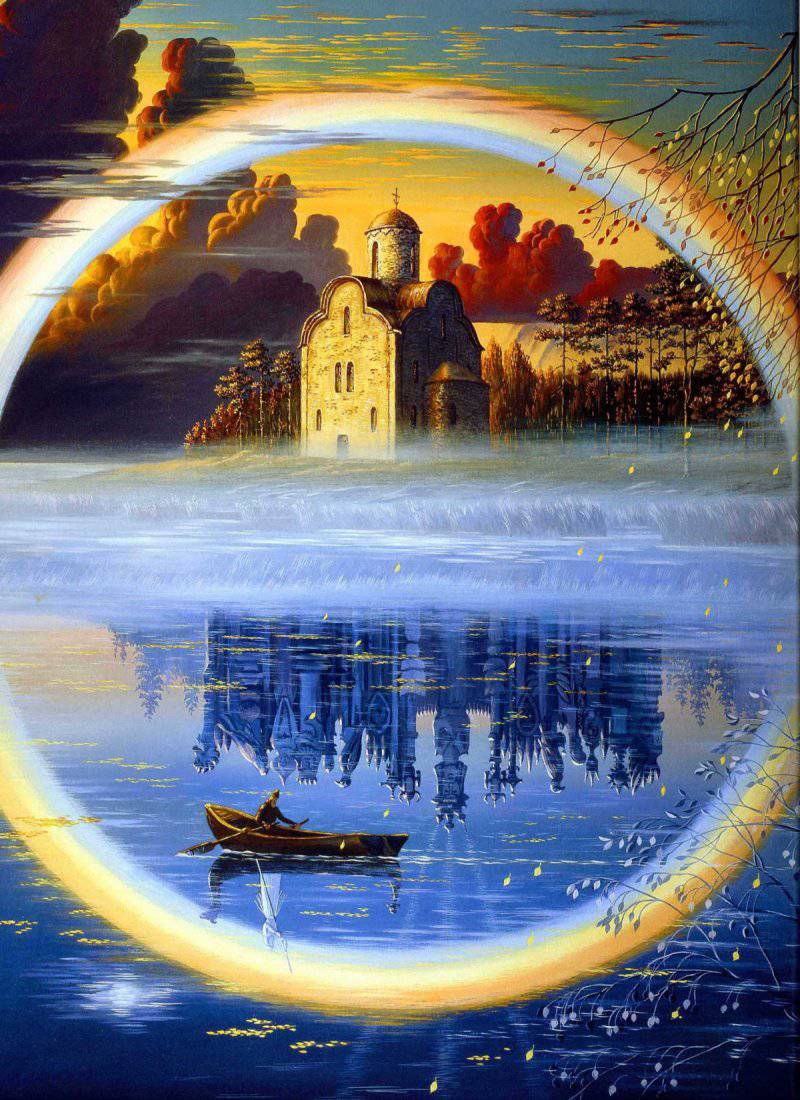 History is one of the most important sciences, as it forms in man a real picture of the world. That is why in the West, and in the East, they pay so much attention to history and its rewriting in their favor, the formation of historical myths. So, literally before our eyes, there was a rewriting of the history of the Second World War, where the main actors were Anglo-American soldiers, military leaders and politicians, and Stalin and Hitler, the USSR and the Third Reich were put on a par with the main sources of war. As a result, the true instigators and instigators of the world slaughter — financial international, the United States and England — not only remained in the shadows, but acted as “good” and winners.


History is one of the most important tools for managing society. It allows you to make white black and vice versa. At the same time, historical myths make it possible to divide society so that it loses unity and power. So, with the help of negative myths, Russian society was divided. Some are supporters of “New Russia”: they say, before that there were only “scoops” and peasants oppressed by tsarism, and people got “freedom” only from the year 1991. Others believe that the USSR was the ideal state. And they are divided into "Stalinists" and supporters of the late USSR - the "era of stagnation". Still others idealize the Russian empire and the Romanov dynasty, sing fairy tales about "Russia that we lost." The fourth remembers the “golden age” of the times of pagan Russia. As a result, society is divided into warring groups, each has its own heroes and anti-heroes, arguments and counterarguments. So, for some, Stalin is a hero, but for others - a “bloody butcher.” For some, Emperor Nicholas II is a worthless ruler, for others - a holy and great statesman.

A single positive myth, a canon that would rally society, make it one, does not exist. There is no integral picture uniting the history of Russia from the times of the Scythian empire to the present day, which allows you to form a patriot who loves and knows both Slavic mythology and epics, and heroes of World War II, the war in Afghanistan and Chechnya. A whole person who would not divide the history of the Fatherland into periods hostile to each other, the history of the Fatherland does not form.

Moreover, various ruling elite groups are constantly creating "their" history. After the baptism of Rus, a whole layer of the history of Pagan Rus was actually destroyed. Another change occurred during the change of the dynasty, when the Romanovs gained power. This became especially noticeable under Peter I and the subsequent rulers, when Lomonosov almost single-handedly had to defend the history of the Russian people. The concept of continuous and many thousands of years of the existence of a superethnos Rus in the territory of Northern Eurasia and the continuity of the main spiritual, mental, cultural, military traditions from the times of the Scythians and Sarmatians to the Rus Svyatoslav and Alexander Nevsky went underground. The official information field was "occupied" by the Western concept, according to which the wild Slavs were civilized by the Swedes-Varangians and Germans. In general, this concept prevails to the present days. Russia-Russia is not a distinctive, separate civilization, the successor of the ancient northern empire, civilization, but “raped” by the East by the outskirts of Western (European) civilization.

After the 1917 revolution, the Trotskyist internationalists went even further and generally wanted to destroy the history and culture of the "accursed tsarist", along with Pushkin, Lermontov Tolstoy, Suvorov, Ushakov and Kutuzov. Thank God, Stalin “cleaned up” these possessed persons, along with them their concept of culture and history of Russia was destroyed. Under Stalin began to form a positive historical myth. To make sure of this, it is enough to recall the historical film masterpieces of that period. However, in the late USSR, this trend, along with other “Stalinist excesses,” was largely destroyed. Although some masterpieces bringing up “Russianness” appeared even then (“Finist - Clear Falcon” 1975 of the Year, “Russia Primordial” 1985 of the Year). But this was no longer a systematic approach, but an asceticism of individuals.

In the Russian Federation, the ideological heirs of the Trotskyists took revenge and embarked on a "reform" of history. In the modern system of school history education, the liberals, and the “Trotskyists” lurking under their mask, continue to develop the concept of the inferiority of Russian civilization, based on it, the whole history of the Fatherland is being shaped. From this concept follows a whole bunch of Russophobic inherently myths. So, in their opinion, Russia is the periphery of world civilization, where only echoes of epochal events and discoveries reached. Peripherality determines the "catching up" nature of the economy, the backwardness of science, technology, culture and education. Russia, on the basis of these views, is a flawed appendage of world civilization.

Naturally, with such a view, there is no place for positive myths that should explain to the younger generation what is good and bad, who is the enemy, to show the heroes you need to focus on. The story turns into a meaningless set of facts that do not have a positive or negative evaluation. It is even worse than the “romantic” view of history, where great historical personalities, heroes, or the Marxist approach, with its socio-economic formations, technological development, decide everything.

Even about the Late Period (1945-1953), it is said that "the Soviet Union was generally in line with global processes, but (due to the conservatism of political institutions) could not find an adequate answer to them." This is frank stupidity and deception. The Stalinist USSR itself set the development vector for all of humanity and a significant part of humanity joined it, the other part looked at the Soviet experience with attention and sympathy. The USSR was then the flagship of humanity, and did not reproduce the experience of the West. "Did not find the answer." And the lightning-fast economic recovery, the preservation of the rapid pace of development of the national economy, the nuclear project! Under Stalin, they even created a financial alternative to the dollar system. The authors do not understand that the USSR was a whole universe that made an unprecedented breakthrough in history and showed to humanity its vitality, competitiveness and advantage (one victory over the Third Reich of all Europe - this proves) of a fundamentally new Soviet model of the social system, society of creation and service to the Motherland .

Absolutely true noted Ph.D. Vitaly Averyanov: “In the concept prepared under the guidance of our academicians, neither interconnection, nor continuity, nor the logical core of teaching history in school - we will not see any of this.” Instead of respecting the past, excessive caution and cutting out entire pages of history when the most important events and victories of Russia like the Sinop battle fall out.

There are also substitutions like the absence of the Great October Socialist Revolution, which was united with the February Revolution. As a result, the separate October Revolution was transformed by a stroke of the pen from “the great” and “socialist” to the continuation of the “Great Russian Revolution”, launched in February of the 1917 year. The October Revolution became the stage of the “Great Russian Revolution”. However, this is not only a mistake, but also a forgery (deception). The February coup, when the western “elite” overthrew the autocracy and created the puppet Provisional Government, was united with the revolution that led to the domination of the socialist model in Russia.

The Great October Socialist Revolution was precisely “the Great”, as it eventually gave rise to a new society and a new civilization — the Soviet civilization. It was an unprecedented fact in history. In addition, the connection to the “one bottle” of the “Great Russian Revolution” of three separate events and periods of history is surprising: the February revolution and the October Revolution, the Civil War. February and October are events completely antagonistic in nature. February is a classic bourgeois coup, the work of groups of elite conspirators who dreamed of rebuilding Russia along the lines of France or England. Civil war is a whole period of history, filled with a mass of large-scale events.

It should be noted that the idea of ​​creating a single standard, a canon in history is an extremely important and serious step. History, as noted above, is the most important part of the informational, ideological confrontation. This is a key information weaponwhich allows to bring up generation after generation, to shape the future. Creating a single positive mythology, the patriotic canon, will allow you to form a single information field that translates images of the past to people. The negative effect, when people have been living in the chaos of tolerant and pluralistic opinions and assessments for more than a decade, is already obvious. Suffice it to recall freaks telling the Eternal Flame, or dancing around him. Lost entire generations, which brought up on the examples of spidermen, Batman, degenerative pop culture. It is obvious that within this degenerative chaos, customers and owners of a significant part of the media and popular culture, structures and people far from patriotism and often playing on the side of the enemies of Russia set the tone. The fight against "cosmopolitan" under Stalin was not conducted from scratch, it was a very serious matter.

It is enough to remember who opposes the very idea of ​​a single history textbook. This is the Committee of Civil Initiatives, which is headed by Kudrin, the person through whom the country's economy continues to evolve (more precisely, collapse). The same Committee includes such well-known faces Gozman, Gontmakher, Svanidze and Yurgens. They said that a single textbook does not correspond to modernity, and in the XXI century there are no longer and cannot be carriers of "ultimate truth", therefore such a textbook will cause a split in society.

Given the dominance in the Russian political, economic and educational circles of the carriers of the Western mentality, with a single standard, it turned out, as in the well-known expression “we wanted the best, but it turned out as always.” For the authors of the concept there are no alternatives, there are only European standards, Russia with delays reproduced all the main trends of the West. Continuous borrowing and repetition. The concept of a single national history textbook does not reflect the “Russian project” (Russian alternative to the West), with its rather harmonious integration of lands, nationalities and cultures, without genocide and parasitic colonialism of other world empires. The leading role of the super-ethnos Rus in the creation and preservation of Russian civilization and Russian statehood is not reflected.

The Westernist party in Russia, the heirs of the February lists, the Trotskyists, cosmopolitans, the sixties, dissidents, perestroika, de-Stalinizers and human rights defenders, once again pulls through the liberal scheme of history. Mentioning patriotism, they immediately talk about tolerance. The concept explicitly states tolerance in relations between nations and states. It seems that if our ancestors were brought up in the spirit of tolerance, we now simply would not exist. Our grandfathers and great-grandfathers clearly knew where the line between good and evil, therefore, created a unique Russian imperial system.
TOLERASTIC PATRIOTISM

Report from the meeting of the Izborsk club on the theme of the new concept of the educational standard for the domestic storiesdeveloped by the Russian Historical Society (RIO). Discussion participants: Mikhail Delyagin, Andrei Fursov, Maxim Kalashnikov, Vitaly Averyanov, Alexander Prokhanov, Vladimir Khomyakov.