The Forty Days of the Ukrainian Revolution 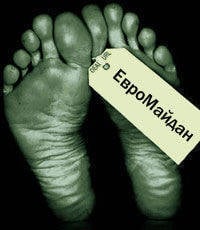 Do not know where to celebrate the New Year? Go to the Maidan. It is interesting there. There are English language courses and self-defense. You can sign up as a member of the All-Ukrainian Association “Maidan”, get a special certificate with benefits. Those who have defended for more than twenty days have the right to go to the toilet without a queue, to receive free consultations at the Olga Bogomolets clinic for the removal of acne and other foreign entities associated with increased social activity, and also boldly go to a proctologist. Only, unfortunately, "Modern Talking" and "Pink Floyd" will not.


The organizers of the festive alternative concert failed to agree with the producers of these musical collectives. Thomas Anders refused to act in unsanitary conditions, and the "kicks" did not even understand who these people were, what they wanted, and with what dick they were pulling somewhere? However, having learned about the amount of the estimated fees of the artists, people from Vitaliy Klitschko’s entourage, who are supposed to finance the whole banquet of freedom, decided stupidly to release Ruslana Lyzhichko. First, for free, and secondly, she has long wanted to portray the Bengali light, and here is such a suitable occasion.

On the Maidan is very good. Here you can find many like-minded people with the same diagnosis as yours: acute paranoid psychosis, schizophrenia. Almost every day, cozy “ambulances” take clients from Maidan to a mental hospital, where they can watch “5 channel” without difficulty and mold plasticine figures of enemies of the people with the subsequent massacre of “bloody executioners”. Some patients, however, tend to injure themselves of various kinds. For example, a man recently slept in a tent on Khreshchatyk, and then, I quote the protocol, stabbed myself several times in the throat and forearm. It probably seemed to him that the stripping of Maidan by the criminal power had begun. Since he did not wait for the “Berkut”, he had to get out of the situation with the help of available tools.

Of course, the intensity of the revolutionary struggle does not subside. This is all the machinations of the junta, trying to pretend that nothing is happening. And how it happens! Maidan is alive and is preparing to celebrate the fortieth day of his standing. More precisely, lying. The rapid development of the governing bodies of Maidan. Commissions are being established on culture, logistics, political activity, relations with students, church organizations of the Kyiv Patriarchate, and on international relations with democratic European countries (including Romania). There are special support groups where you can apply for free legal assistance. Experienced lawyers will tell you how to give a harmless domestic trauma for the hardest mutilation received in a collision with a brutal "Berkut", how to correctly remove a beating.

Work is in full swing. Constant elections to the observance, guardianship and other councils of the Maidan are constantly being held. The number of managers is rapidly growing, there are printed and online bodies, saunas, night clubs, where participants of the liberation movement can order free refreshments with the help of a special flyer.

29 January, on the eve of the New Year, held a fun and laid-back show called "The Fifth All-Ukrainian Council: the fight against terrorism." If someone doesn’t know, a well-known activist, a UE blogger, a journalist, a Euro-Atlanticist and just the owner of Chevrolet Aveo, Tatiana Chernovol, were brutally, completely inhumanly beaten. She hit hard on the torpedo, cutting off some gangly bastards on a Porsche Kayena. With swollen lips, she courageously walked away from the chase, because she understood: if you scratch the Porsche, it could end in a provocation against Maidan. So, strictly speaking, it happened. At present, the investigation team, led by Colonel Gritsenko, is carefully studying the possible connection between the Porsche driver and Al Qaeda and Viktor Yanukovych. Every day they watch the recording from the DVR, drop mean men's tears and swear to revenge on the organizers of the barbaric tragedy.

In the meantime, the movement "Light up the New Year's Christmas tree is expanding all over the country, please the Maidan activist." As you know, nothing is as valuable as an activist’s car on fire. Evil people claim that these are members of criminal groups that carry out the political order of the junta. In fact, there are many good and kind people who care about the health of activists, see how they literally burn at work. So help, who can.

The Democratic Initiatives Foundation, headed by a woman with an unhealthy complexion, conducted a Maidan case study. They suffered for a long time: how to classify the participants of the revolution? On the one hand, they seem to be constantly, but not all. On the other - on Sundays, they gather, but then stupidly diverge. As a result, a very high-quality hypothesis appeared, as for me: there is a Maidan camp and a Maidan rally. Irina Bekeshkina was able to interview these different people in some cunning way. The result was an interesting picture: they are all ready to stand to the end. And at all this end is different. Some are for impeachment. Most of them. Others are fighting against the Cabinet - they are generally up to the fig. Still others want European integration. There are fewer, but enough. We now turn to relatively small groups — seventy or more percent. So, they all united around common goals: to raise the level of people's well-being, to send out the head of the Ministry of Internal Affairs, number the helmets of the Berkut, let go of the Maidan activists, “topped those that hang out of Moscow”. The survey found that 90% percent of representatives of the Maidan-camp - visitors. And, oddly enough, seventy percent of the participants in the Maidan rally are also from other cities. Therefore, the conclusion is made: the entire Ukrainian people united around the values ​​proclaimed on the Maidan, and all the people of Kiev support this rush. The whole world applauds the courage of fighters for the rights and freedoms of simple Raguli. Tears of joy come to mind when you read specialized websites dedicated to BDSM and Maidan, as well as Facebook pages marked “Maidun”. What beautiful people live in this country! Yes, it is literally a paradise for psychoanalysts! As our prapor used to say, it’s easy to regret a kitten. He is so cute and fluffy. And you take pity on a fighter with such a x ... eat. He is also a man.