Time to test the gunship MC-27J with a new gun 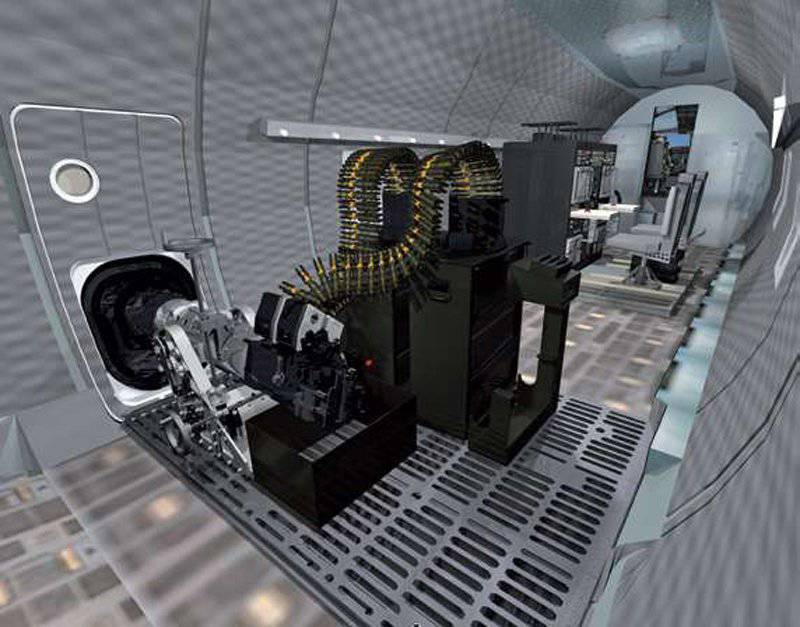 A computerized image of a pallet with a cannon system and a functional module of operators (in the background) inside the gantry of MC-27J. The flexible spacer surrounding the barrel in the modified door allows you to shoot 30-mm guns without disturbing the cabin tightness

Alenia Aermacchi and ATK at a briefing at the Paris air show announced the details of the successful first stage ground and flight tests of their multi-tasking aircraft MC-27J and talked about the subsequent second and third stages of the development of this aircraft.

The two companies announced at Farnborough in the 2012 year of their intentions to work together in a phased development and further promotion of the MC-27J. Since then, ATK and Alenia Aermacchi have conducted a series of tests at the Eglin airbase in Florida, which ended with live gunfire from the GAN-30 23-mm cannon on the Florida coast in March 2013. Tests were organized and certified by the US Air Force, and the command of special operations of the Air Force called them successful.

Demonstration of the ability of the aircraft to quickly transition from cargo to armed configuration exceeded all expected test targets. The tests consisted of two tasks: roll up and roll out a pallet with a gun and a functional module of operators (control and management) in four hours and carry out the integration of these systems with the aircraft within two hours. The execution time of both tasks did not exceed the specified standards, and the latter was carried out in just one hour and two minutes. Only three people are needed in order to perform the whole operation.

The test aircraft (which Alenia Aermacchi showed in Paris) was equipped from the very beginning with a variety of different sensors. The pressure sensors measured the overpressure arising from the firing of the gun, which could damage the fuselage skin, and the strain gauges in the cargo compartment measured the effect of the recoil forces of the gun on the plane body. Representatives of Alenia Aermacchi said that the pilot could not feel the firing of the gun, because the installation design absorbs recoil forces well.

When installed inside the aircraft standard pallet 463L there is no need to refine the fuselage, trimming or cutting the body. According to Ben Stone, president and CEO of Alenia Aermacchi North America: “It's as simple as installing any other pallet.”

Combat shooting from an aircraft was carried out on a luminous target at the surface of the sea, first single shots and then in different modes: a line of eight shots and fully automatic 200 fire shots per minute. Tests confirmed the safety of firing and the expected (so far secret) circular probable deviation of the weapon system. They were carried out on board a classic heavily armed aircraft (the so-called gunship), while the gun's line of sight was calibrated with the sensor system and the pilot pointed the gun using a monitor installed in the cockpit. 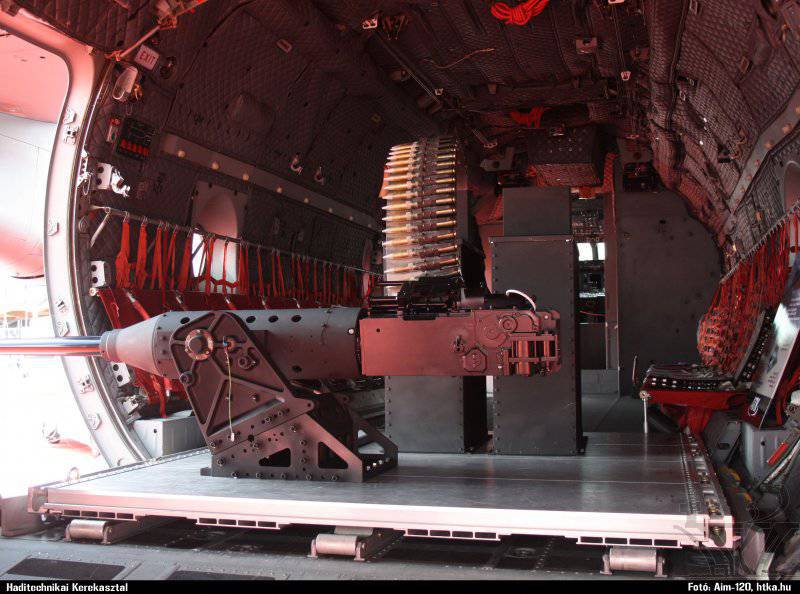 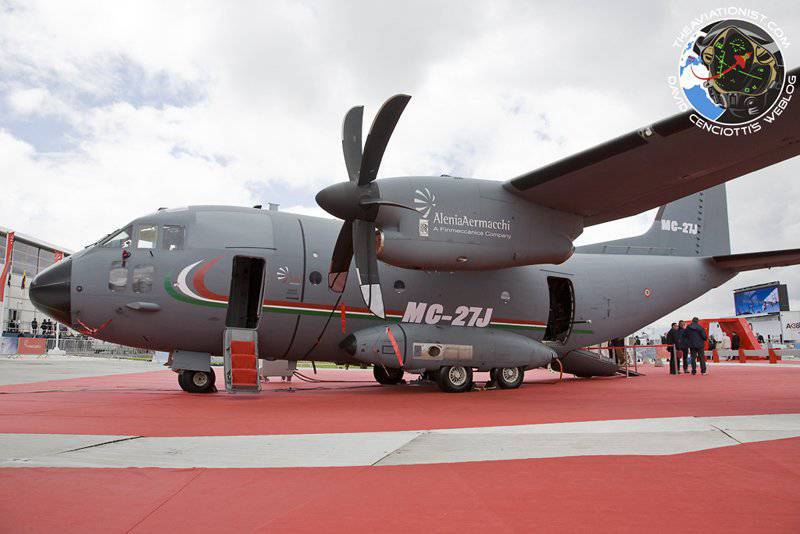 In the tailgate of the MC-27J aircraft, the 463-mm GAU-30З gun is mounted on a standard 2L pallet 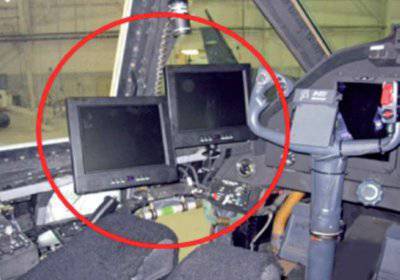 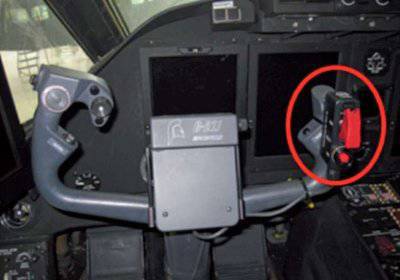 Monitors pointing guns in the cockpit (above). Pilot / opening fire control switch on the pilot's steering wheel (below)

In the final version, firing will be carried out in the following mode: the pilot captures the target on his monitor in the cockpit, presses the cocking / opening fire control switch on the steering wheel and thus agrees to open the fire by the operator of the function module. In fact, the pilot "roughly targets" the gun, and the operator on the screen of his monitor accurately directs it to the target. Alenia Aermacchi and ATK have entered into an agreement with the United States Air Force to conduct joint R & D on a C-27J aircraft, in which the Air Force was responsible for independent certification and certification. These works allowed to evaluate the new recoilless version of the 30-mm ATK Mk 44 gun.

The gun received an elongated barrel, its dimensions were increased in order to install a larger receiver and the recoil cylinder. These innovations made it possible to increase the mass travel of the recoil parts of the gun and reduce the recoil force by 40%. Thereby, there was no need for a muzzle brake, but at the same time a longer barrel increased the likelihood of vibration from the air flow. In order to stabilize the barrel, ATK has developed an extension cord screwed onto the muzzle with mechanically machined recesses that look like recesses in a golf ball.

The US Air Force is interested in this new version of the Mk 44 cannon, because it provides increased accuracy and exerts less pressure on the body of the aircraft. The gun is likely to receive the GAU-23A / A designation in the United States Air Force, since the GAU-2WA gun version is already installed on the AC-130W Stinger II gunship.

The gun can shoot 30x173 mm ammunition and during the tests of the first stage (Phase 1) it was fired with a PGU-46 projectile of the NATO standard, as well as some unnamed types of ammunition from ATK. A cannon pallet weighs almost 4000 pounds with a full ammo from two containers of 250 shots. Station operators for two people weighs pounds 1500

The second phase of the test program (Phase 2) will begin in November 2013 of the year at the ATK company site in Minnesota with ground fire tests. This stage will be distinguished by advanced integration of the target-intelligence system and the weapons system. The gun can rotate in azimuth and elevation, synchronizing with the optical-electronic station installed in the nose, although ATK reported that they are still evaluating the final parameters regarding the angles of movement of the gun. Flight tests are scheduled to take place in the 2014 year.

The test aircraft currently installed aStarSAFIRE 380-HD sensor head, hired by FLIR Systems, although the L-3 Wescam MX-15HD sensor head (station) has also been tested. Raytheon optoelectronic stations have not yet been tested in this configuration, but Alenia Aermacchi and ATK have a long history of integrating them into aircraft. The sensor station can be installed in the bow of the vessel, as well as in the main chassis fairing.

This second phase, scheduled for completion at the start of the 2014 of the year, will also include the integration of high-precision ammunition, induced by a laser pointer. These include the Viper Strike from MBDA US, the Griffon from Raytheon and the PGM PGM shells from ATK currently in development.

The method of launching high-precision ammunition will depend on the needs of the customer (some will want to use launch tubes), so deploying weapons in the cab with excess pressure will be optional. In order to seal the space inside the aircraft, a flexible spacer will be installed in the modified door around the gun barrel. In addition, the functional module with the operator’s seats can be isolated from the rest of the cabin, but it also maintains its performance even when the aircraft is depressurized.

Alenia Aermacchi and ATK fully funded the first and second stages of the development program for MC-27J, but officials expressed a desire to continue the third stage (which will probably last another year) subject to the financing of the contract by a third party. In the framework of the third stage, the launches of high-precision PGM ammunition will be demonstrated. The start method still has to be determined, but it may be possible to start with a ramp.

On the question of whether the MC-27J is being developed for the Italian Air Force’s requirements for the special mission platform (Praetorian), Mr. Stone said that the capabilities of the new ganship meet these requirements, but were not specifically created for them, because they meet the needs of other potential customers.

Alenia Aermacchi has identified a possible market for 50 aircraft, which includes both current and potential C-27 users in the Middle East and the Far East and in South America. Representatives of the company stressed that the current focus is on fulfilling the test and demonstration schedule, but, nevertheless, prospective customers are invited to the upcoming tests.

Alenia Aermacchi and ATK are promoting their system as a scalable solution with two levels of operational management / surveillance and intelligence; an improved second-tier version will have a relay communications station and an advanced intelligence gathering system. A two-tier aircraft armament system, in addition to the gun on a standard pallet, provides for the installation of launch tubes for high-precision PGM ammunition.

The final concept of the MC-27J aircraft will have a SAR / ISAR multi-mode radar (synthetic aperture / inverse synthetic aperture), selection of ground moving targets (GMTI) and aerial photography system, optical-electronic stations, radio interception and reconnaissance by means of satellite, satellite communication in the Ku-band, as well as the ability to connect to the control network using a data channel in direct view for transmitting full-frame video. It will have a PGM gun and precision weapons and a five-man crew consisting of a pilot, co-pilot, two weapon operators and a gunner serving the PGM missile. Referring to the aforementioned sensor and communication systems, ATK’s program director, Brad Hayes, said: “All this will be tailored for the customer, but we have already integrated a wide range of systems on our pallets (weapons and control module) and, as a result, initiated the point design.” 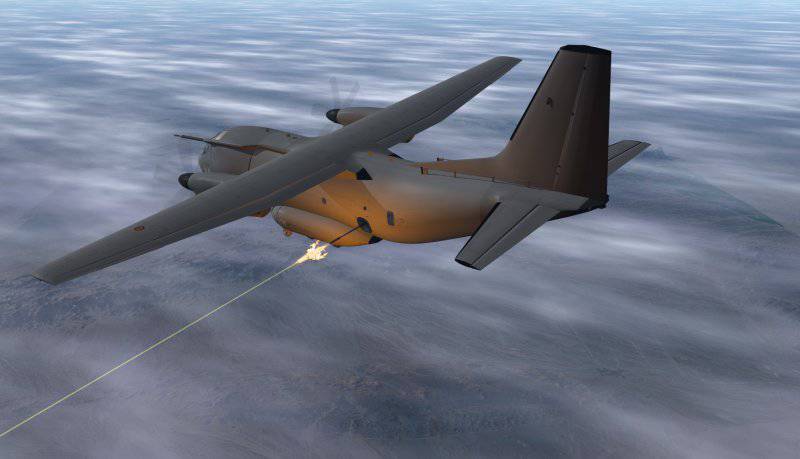 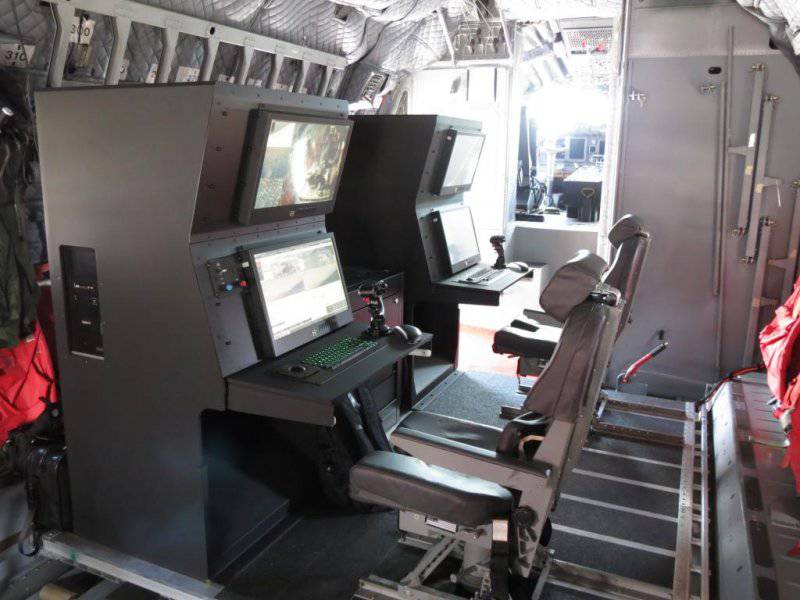 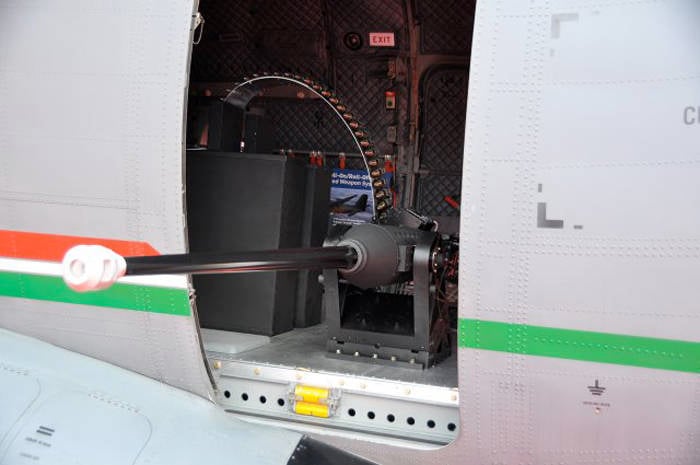 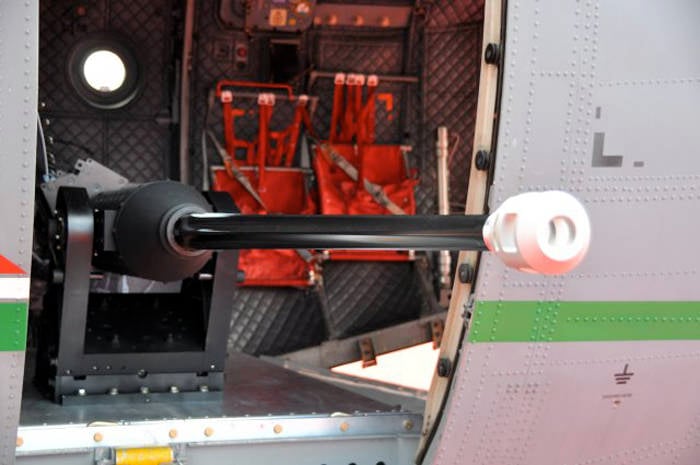 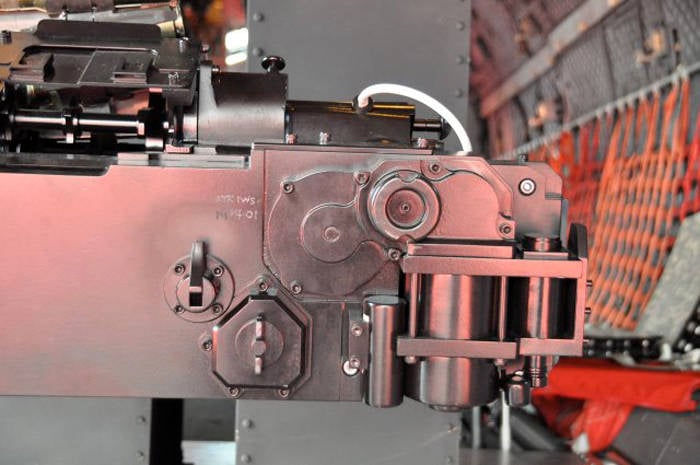 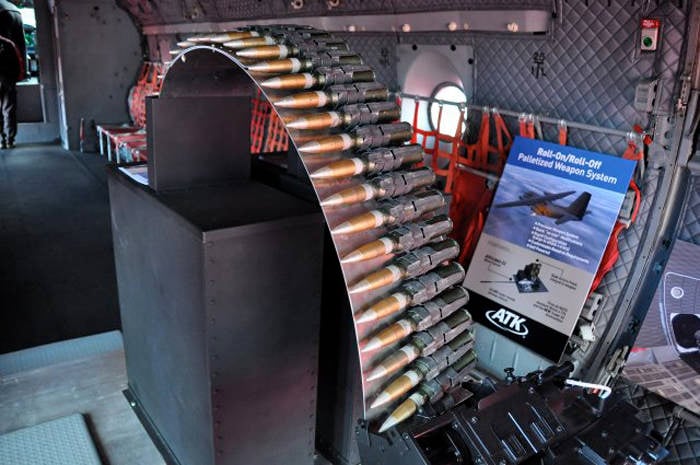 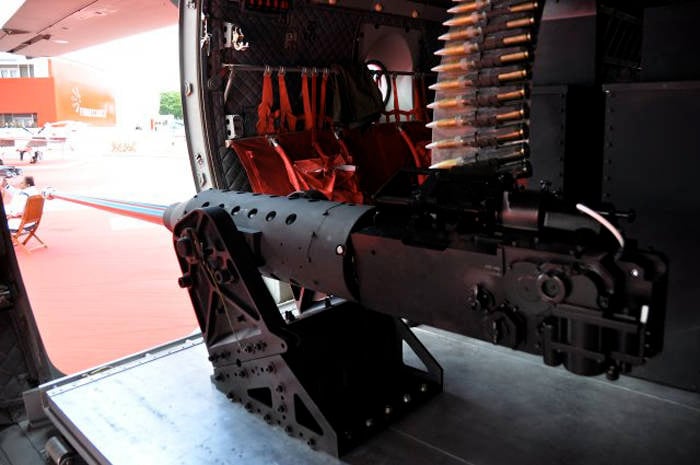