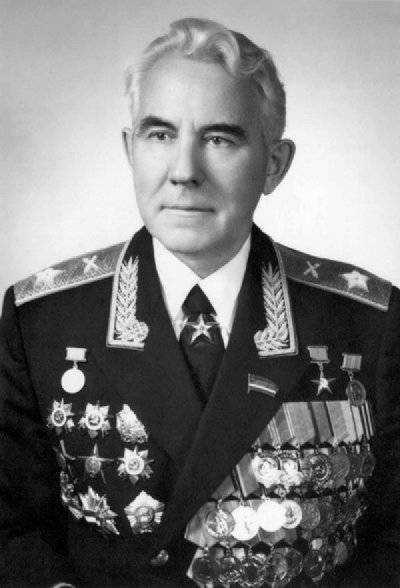 December 23 turned 95 anniversary of the birth of a prominent Soviet commander of the Hero of Socialist Labor Marshal of Artillery Yefim Vasilyevich Boichuk.


Efim Vasilyevich was born in 1918, in the village of Yukhimivtsi, Chernoostrovsky district, Khmelnitsky region, in a peasant family. In the middle of 1930, when he had to choose a profession, the service in the Red Army attracted many guys. So Yefim chose to defend the Motherland as the work of his life. In 1939, he graduated from the Tomsk Artillery School and was assigned to the Far East as commander of an artillery platoon of a light artillery regiment. Lt. Boichuk served faithfully, did not appear on the lists of laggards, and two years later he was appointed commander of the battery. In September 1941 of the year in this position, Boychuk, as part of his regiment, was transferred to the front ...

He went through the whole war. He commanded a battery, an artillery division, served in various staff posts, but all the time on the front line. He fought bravely and skillfully, was wounded several times, in one of the battles in the 1942 year, being surrounded, caused artillery fire on himself and did not die by a miracle.
In war everything goes faster - both life and career, if you stay alive.

During the war years, Boychuk went from lieutenant to major. In May, 1945-he was the chief of staff of an artillery brigade, four combat orders sparkled on his chest. However, the war for Efim Vasilievich did not end then. In August, 1945, he was sent to the Far East - the chief of staff of the army cannon brigade. As part of the forces of the Trans-Baikal Front, Boychuk participated in the Soviet-Japanese war.

After the war, he served as chief of staff of an artillery brigade, artillery of a rifle division and a senior officer in the department of artillery headquarters of the Trans-Baikal Military District.

Front-line experience, excellent military training and personal organization of Efim Vasilyevich were successfully combined with his vigor and assertiveness. Abilities and exceptional diligence served him well and during his studies at the F. Ye. Artillery Academy. Dzerzhinsky (1948 – 1953 years), after which he graduated with honors and was appointed commander of an artillery regiment.

The period of Boichuk’s post-war service coincided with the development of large-scale nuclear work in the USSR weapons and means of delivery. In 1954, he was appointed commander of the RVGK engineering brigade — one of the first Soviet-era formations equipped with tactical missile systems. A year later, Boichuk heads the newly formed Kamyshin Artillery Technical School for the training of engineers and technicians for the operation of rocket weapons. Two years later - a new challenge: Boychuk is trusted to form a compound of intercontinental missiles in the Urals.

In 1962, the recently formed Strategic Missile Forces were faced with the challenge of preventing a US invasion of Cuba. As it is known, the Strategic Missile Forces and the rocket men who participated in Operation Anadyr made the main contribution to resolving the Caribbean crisis. It was the only post-war history countries of operation related to the transportation and deployment of a group of troops with nuclear weapons on another continent. All types of the USSR Armed Forces participated in it.

Efim Boichuk personally participated in the organization of this operation, which clearly showed that only force could be the only effective way to counteract the US policy of using military force in resolving interstate problems. For Yefim Boychuk, this conclusion has become an axiom, and therefore he has devoted his entire future life to strengthening the authority of the nuclear power of the Fatherland.

In 1963 – 1968, Efim Vasilyevich heads the Missile Forces Directorate of the Main Operational Directorate of the General Staff of the Armed Forces of the USSR, making a large personal contribution to the creation of new, more advanced missile systems, developing the organization of units and formations of the Strategic Missile Forces, their formation and ensuring combat readiness. In 1968, Lieutenant-General Boichuk was appointed first as deputy, and a year later, first deputy head of the military educational institution of the General Staff of the USSR Armed Forces.

The full talent of Efim Vasilyevich as a prominent commander was revealed in 1974 – 1985, when he headed 12, the Main Directorate of the USSR Ministry of Defense, engaged in the implementation of military nuclear technology policy, including the maintenance of the nuclear arsenal of the Armed Forces of the USSR.

Based on the results of comprehensive scientific research, Colonel-General Boichuk is taking a number of radical measures to increase the security of the state’s nuclear ammunition during the period of danger. The tactics developed by him for central nuclear weapons storage allowed the required combat readiness of nuclear forces, and, combined with organizational and technical measures, significantly increased the survivability of a nuclear weapon stockpile.

The basic principles of this tactic, somewhat refined and adjusted to current requirements, have so far retained their relevance and form the basis for the organization of actions by nuclear support units.

With the direct participation of General Boychuk, all types of the Armed Forces were equipped with modern nuclear weapons that meet the requirements of reliability, survivability and effectiveness. This task was subordinated to the activities of scientific institutions and polygons of the Main Department.

For outstanding achievements in strengthening the country's defense capability of 4 in November 1980, Boychuk was given the military rank of Marshal of Artillery, and by the Decree of the Presidium of the USSR Supreme Council on February 17 of 1984, the title of Hero of Socialist Labor.

“On such, as Efim Vasilevich Boychuk, the army kept! - recalled one of his associates, Lieutenant-General Alexander Suetin. - He was selflessly devoted to the cause, possessed exceptional restraint and efficiency. His work style was based on demanding and trusting people. Respectful towards conscientious and executive people, did not tolerate irresponsibility. ”