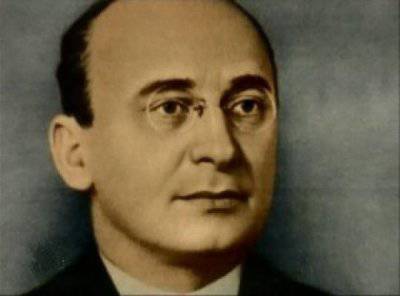 60 years ago it announced the execution of Stalin's closest ally


Exactly 60 years ago, according to the official version, the iconic man of the Stalin era did not become. However, the “gone” in the case of Lavrenty Pavlovich Beria sounds, of course, too simple. After all, it was not just the execution of an espionage sentence. After decades, not only researchers (they - the lucky ones! - gained access to some of the hitherto secret archives), but also to a very wide audience, numerous fans historical Journalists have opened up new details, forcing, if not to reconsider the “textbook” image of one of Stalin’s closest associates, then at least “clarify” it.

The fact that the execution of Lavrenty Beria (however, there is reason to believe that on December 23 of the 1953 of the year there was either no shooting at all, or a twin of Beria was shot - see KM.RU Help) was, in fact, the elimination of an unwanted opponent in the fight for power, to doubt today is simply indecent: it is painfully obvious, to say the least, facts - both indirect and direct. In particular, Beria’s accusation of espionage simply does not have a factual basis as such - only some “information”, some “conclusions”. Everything would be fine, but the interest of one character, which ultimately prevailed in intrigue and led the country, was clearly visible in the whole story. Where is a separate issue.

Today, it only remains for us to pay tribute to the landmark figure in the history of our country in one of its most difficult and tragic periods.

In a conversation with the KM.RU columnist, the legendary Zamsovnarkom was recalled by a well-known publicist and best-selling author “Why Russia is Not America,” “How Russia Beats America,” and others, Andrei Parchev:

- The fact is that in the Soviet Union, starting from 1947, the death penalty was abolished, and even the killers of law enforcement officers were not shot, but sentenced to 25 years of imprisonment. Somewhere in a few years, the death penalty still began to be used in strictly defined cases - for example, in cases of treason against the Motherland in the form of espionage, sabotage, and so on.

Beria’s problem was that he was, above all, a very senior leader. In some respects, he was higher in rank than Georgy Malenkov, who was the party leader on a par with Khrushchev. But Beria was rather “on the farm”: during the war he was the first deputy chairman of the Council of People's Commissars, which, in administrative terms, meant that he was actually the head of state. The fact is that the post of “secretary general” was not quite official: the Communist Party, oddly enough, was considered something of a public organization.

And, in principle, it can even be considered that the appointment of Lavrentiy Beria after the death of Stalin as Minister of the Interior was, in my opinion, actually degraded, but everyone understood that his real situation did not deteriorate, but, on the contrary, only increased . The former leaders knew perfectly well that Beria was part of a peculiar triumvirate of Malenkov — Beria — Khrushchev, as they were also ironically called, “the group of Young Turks”. Moreover, Khrushchev did not deny this fact, but he answered evasively to detailed questions about the meaning of that “troika”, rejecting the version of any of its political significance. In fact, it is obvious that it was such a group that was going to come to power in the country. But inside the triumvirate, a conflict has matured, the basis of which was Khrushchev's understanding that he would not have drawn into the status of the main head of state within this group.

I recently participated in a TV show, where Malenkov’s son told, from the words of his father, why he “turned in” Beria. Shortly before the arrest of Beria, Khrushchev came to Malenkov and told him that Beria allegedly wanted to kill him and for this purpose he was recruiting him - Khrushchev. Naturally, the frightened Malenkov sanctioned the arrest of Beria.

Of course, we must pay tribute to Khrushchev: being a poorly educated man, he technically outplayed everyone in the battle for the Kremlin. Later, Khrushchev (albeit a much less bloody path) was able to remove Malenkov from power. But in general, this story clearly shows the strongest fear experienced by the party elite in relation to Beria. For this, it was not a pity to even cancel the "era of mercy." Such is the specificity of our state. It is pyramidal in structure and centralized. But this is even more dangerous when the top of the pyramid begins to shake from conflicts, weakening the whole pyramid of power.

Beria was extremely authoritative, not because someone as a politician “created” and “exalted” him, although Stalin's benevolent attitude towards him certainly played a role. Lavrenty Pavlovich Beria himself was an extremely clever man, which, in particular, was also manifested in his peculiar wit. He was a highly educated man who even noted such ardent critics of the Stalin era as Solzhenitsyn. And all these qualities Beria was able to cultivate in himself independently, sometimes engaging in self-education.

At the same time, often mistakenly or maliciously, Beria is considered to be involved in the repressions of 1937-38. These repressions were organized by the political leadership of the country, including partly according to the demands of the lower classes. But after all, Beria in those years was not at all part of the country's top political leadership and objectively could not participate in these matters! He entered the Politburo only in 1946 year. Only full members of the Politburo had a decisive vote at its meetings, where all decisions on repression were taken, and of the candidate members only the senior candidate had the right to vote, and even if the members of the Politburo were equal. Beria is also blamed for other episodes that occurred after the repressions of 1937-38, but upon close and careful study of them more often you come to the conclusion that everything is not so obvious there either.

We still do not quite well imagine what Beria was doing when he was in charge of the security forces (from the end of the 1930s to the middle of the 1940s). In essence, he created a parallel industrial empire within the NKVD, which was not built on slave labor, no matter what anyone said. And in this field his merits are very great. He oversaw the production of ammunition - this is the nuclear industry, created with the closest participation of science using high-tech at that time.

What is the Soviet atomic bomb? This is a fusion of intelligence, science, technology, organization. And it was Beria who organized this rafting, which ultimately allowed our country to become world leaders for many years. Do the US have a monopoly on atomic weapon - the world in general and our country in particular would look radically different than now.

Ctrl Enter
Noticed oshЫbku Highlight text and press. Ctrl + Enter
We are
Beria is the protagonist of the USSR atomic projectMyths of the Great Patriotic. Did Stalin have prostration in the first days of the war?
Military Reviewin Yandex News
Military Reviewin Google News
102 comments
Information
Dear reader, to leave comments on the publication, you must sign in.