The volume of "transferring" potential contracts for the export of military hardware to the future is 469 billion. 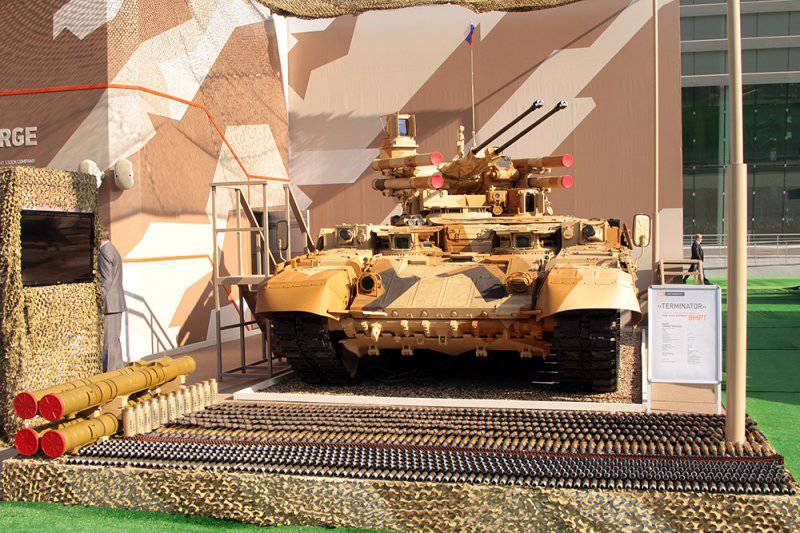 The total volume of "transferring" potential contracts for the near future for the export of armaments (value of intentions) as of the end of December 2013 was estimated by TsAMTO at $ 469 billion dollars.

- completed tenders, contracts with the winners of which in the 2013 calendar year are not signed;

- Tenders announced in 2013 year (decisions on the choice of winners have not yet been made);

- Tenders announced earlier and held during 2013 (decisions on the choice of winners have not yet been made);

- stated intentions for tenders in the future;

- stated intentions for the direct purchase of weapons;

- joint programs for the development of military hardware with importing countries, taking into account the announced volume of purchases by importers of the relevant types of weapons.

Of course, the dynamics of the volume of newly concluded contracts for the export / import of weapons will depend on the situation in the global economy. However, even if the situation in the global economy develops according to the “optimistic” scenario, it is far from a fact that all declared as of the current moment intentions to export / import weapons will eventually be transformed into firm contractual obligations.

In terms of tenders (already completed, ongoing, as well as announced for holding), significant changes are also possible depending on the situation in the global economy. In addition, it should be borne in mind that the timing of the tenders included in the calculation varies greatly in time.

Nevertheless, an assessment of the total value of the current intentions on arms procurement allows for a tentative prediction of the situation on the world market. weapons in the short term, in part of the annual contracts for the export / import of weapons.

If we take as a guideline the maximum annual value of contracts concluded for the last 4 of the year (92,3 billion dollars in 2012 year), then the current volume of intentions for potential procurement will support this level for more than 5 years.

In the event of a new global economic crisis, a certain part of the declared arms procurement programs will be canceled or postponed. However, the already created “airbag” on the basis of the formed “package” of intentions to export / import weapons is so significant that the global economic crisis will not be able to significantly slow down the growth of the world arms market. In the worst-case scenario, it can be assumed that the volume of new contracts for promising programs, which are currently not known and not announced, will compensate for the possible reduction of previously announced commitments on arms procurement. That is, even when the situation evolves in the worst case, the annual volume of newly concluded contracts may remain at the level of 77-80 billion dollars over the next few years for 5.

In the case of sustainable development of the world economy, the annual volume of contracts for export / import of weapons will be higher (the addition will be provided by new procurement programs, which are not yet known while maintaining the current level of intentions).

As of now, the category of “tender” (ongoing, as well as announced tenders) ranks first in the ranking in terms of value of arms export / import intent - 222,363 billion dollars or 47,4% of the total global potential contracts for the short term .

For tenders that have already been completed, but no firm contracts have been signed with the winners, the corresponding value volumes are “credited” to the account of the countries that won these tenders. In addition, the stated intentions for the direct supply of arms, as well as the planned purchases by countries-importers of weapons for the development of weapons and military equipment, are included in the balance sheet for each respective exporting country.

The second place in the ranking is occupied by the USA (actually the first by countries). To date, the total amount of potential US contracts moving to the near-term outlook, which are currently included in the “intentions” category (winning tenders are taken into account, contracts for which have not been signed yet; notifications of the DSCA Agency for 2013 year and notifications of the DSCA not documented in contractual obligations, as well as stated intentions for the direct supply of weapons), TSAMTO estimates in the amount of 149,168 billion dollars (31,81%).

Russia with the volume of “carry-over” potential contracts in the amount of 27,665 billion dollars (5,9%) ranks third (second by country).

In general, at present, the TSAMTO rating in terms of the value of potential contracts for the near future for the export of arms (the value of intentions) includes 27 countries (taking into account the category of "tender").

Note: after the calculation of the rating, it became known that the Brazilian Air Force made a choice in favor of purchasing the Gripen NG fighter jets of the Swedish Saab company 36. The estimated amount of the contract, which is scheduled to be signed at the end of 2014, is estimated at 4,5 billion dollars. That is, the amount in the category of "tender" is reduced by this amount, and the volume of potential contracts of Sweden for the near future increases to 9,072 billion dollars (with this amount, Sweden in the ranking by country moves to 5 place).

Ctrl Enter
Noticed oshЫbku Highlight text and press. Ctrl + Enter
We are
India, Australia and Qatar will be the largest customers of weapons in the short termArmored Vehicles Market in the Middle East in 2005-2012 and forecast for 2013-2016
Military Reviewin Yandex News
Military Reviewin Google News
5 comments
Information
Dear reader, to leave comments on the publication, you must sign in.