The collapse of the orange blitzkrieg in Ukraine

December 27 2013
210
Oleg Tsaryov, the people's deputy of Ukraine from the Party of Regions, in his article on the background of Kiev Euromaidan said that the Orange Revolution did not result in a “civil war” only because the opposition leaders, Klitschko, Pyatnybok and Yatsenyuk, turned out to be, fortunately, not sufficiently decisive and disagreed. And yet, among them "was not Lenin." 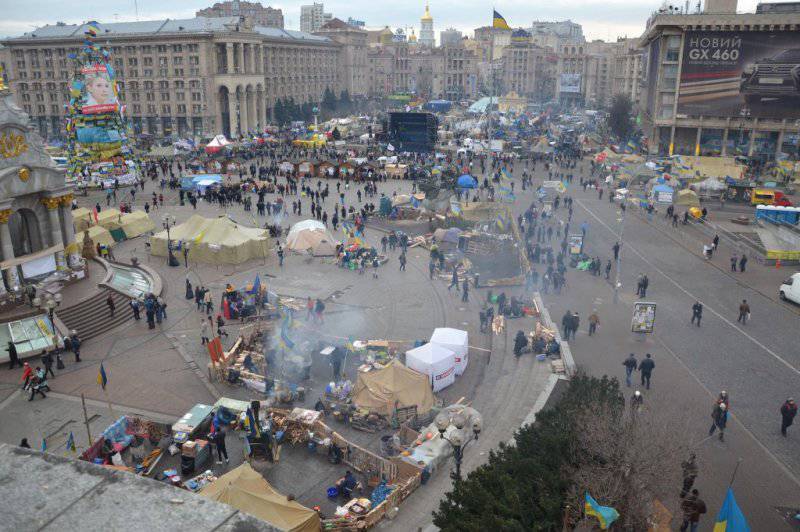 This is clearly an overestimation of the trio of leaders of the coup, their low expressiveness from the very beginning of the “orange events” analysts considered the main obstacle to Euro-revolution. According to Tsarev, it turns out that they were independent in their decisions of principle, and foreign euro sponsors only financed them. It cannot be that such a Maidan tail was twisted by “Europe” ... And Lenin was really independent in his decisions, another thing is that all revolutions are somewhat similar, of course.

On the other hand, Tsarev's script contradicts the very idea of ​​the Orange putsch by American professor Gene Sharp, because his “revolutions” are not social (according to Lenin), but are made in the specific interests of foreign customers, therefore they make major decisions, especially since modern communication is easy allow it to be done.

Here abroad there could be disagreements about the strategy of their Euro-revolution, and they could have resulted in Klitschko and company disputes. Did Nuland and the entire diplomatic Eurut came to the Maidan at the request of Klitschko? Rather, they came to inspect how their money was being spent, some experts wrote about, and in order to put pressure on Yanukovych more firmly with their good example. By the way, one of the inspectors, John McCain, is the unofficial leader and financial sponsor of the Gene Sharp Institute, so he is seen at many orange events in the world.

The Euro-revolution in Ukraine failed for a simple but compelling reason: Western politicians, led by Nuland, failed to intimidate President Yanukovych and split his power elite. Although Nuland spoke with him very strongly, and threatened a number of Ukrainian oligarchs, she herself admitted this, the president did not make any serious concession to Euromaidan: he kept the government of Azarov, and did not make any negotiations.

The entire stake was made by the West on the suddenness and strength of political pressure on Yanukovich’s power, but this moral and political blitzkrieg failed. Probably due to the false start, as Euromaidan V.Putin commented.

Yanukovych’s firmness relied, of course, on the support of Moscow. Putin immediately made it clear: in Kiev, pogroms, inspired by them from abroad, Russia recognizes the authority of the legitimate president of Ukraine. Putin’s authority is very high in the South-East of Ukraine, and his statement contributed to the fact that workers, industrial Ukraine ignored the Orange putschists, Yanukovych received a reliable political rear.

In such a situation, the West could not continue the Orange Revolution in Ukraine: the split of the power elite is its prerequisite, but it failed. Then it was easy to calculate: if Euromaidan goes "to the end", then Yanukovych, relying on a strong rear, will easily suppress it. As a consolation prize, the West could only count on a split in Ukraine, and the “honest weaning” of the three western Galician regions, and then with the consent of that of Yanukovych and Putin. But even this was impossible to guarantee when “civilian” clashes would begin.

Guaranteed peace received a pan-European crisis, a sharp deterioration in relations between the West and Russia, and the European Union was losing all sorts of views on Ukraine. The United States could not go for it, for many reasons, if only because the withdrawal of the US troops from Afghanistan is scheduled for the next year, and it needs reliable transits. The West had only to put pressure on Yanukovych, which he did and still does, although without former enthusiasm.

Most likely, in Washington, the command was given to "hang up" Euromaidan, and he clogged himself, gradually turning into a dull show. How should he "die" - this is the decision that the West can leave to Klitschko and the company

Thus, Yanukovych and Putin won the first round on points, but the “Ukrainian party” was not finished yet. Western agents of influence — all of its NGOs, NGOs, and the US embassy in Kiev continue to work, creating a “social environment” that is insane, immune to the arguments of reason, a kind of network sect, instilling in it the only true symbol of “European faith” and hatred of all “wrong ". Yanukovych will have to somehow react to this “social activity” if he wants to prepare for the 2015 year and preserve Ukraine’s statehood.

PS On the highway near Kiev, an attack was committed on Tatyana Chornovil, an Euromaidan activist journalist, his other activists report, and point to power. We note, there are no results of the investigation yet, and political strategists of Maidan have already made Chornovil a “sacred sacrifice” in order to plant a fresh “coal” in protest. But, Chornovil survived, so activists have to exercise restraint: after all, it is not yet known what she would say, this “attack” may be a consequence of a banal accident, there is also such a version of the police. And, most likely, this version is correct: “sacred sacrifice” is not left alive. And the figure of a journalist will be too small for this role.

That's who you really need to worry about, this is Vitali Klitschko. He is “sacred” in all respects, but this is still half the trouble. After the collapse of Euromaidan, Klitschko for his masters is already spent political material. He now has no real chance of success in the 2015 presidential campaign of the year, and at the same time formally remains the main opposition candidate. That is, Klitschko is becoming a hindrance to the West in the 2015 campaign of the year - this is a good reason for deciding to get rid of it.

While Euromaidan has not faded to the end, everything can be stupidly blamed on power, as in the case of Chornovil. And the government should now "take care of Klitschko"! "Sacred sacrifices" will not be able to help Euromaidan, too late, but the players at the political board are thinking about the next round: the presidential campaign of 2015 in Ukraine.