In 2001, in Rybinsk, on the stocks of the Vympel open joint-stock shipbuilding company, a groundbreaking ceremony for a new-generation Scorpion artillery boat was held.

This fourth-generation ship (according to the Western classification, a small corvette of the class) was created using the technology of reducing radar and thermal visibility. According to Yury Arsenyev, the chief designer of the Almaz Central Metallurgical Bureau, the development of rocket boats was carried out in two main directions - reinforcement of weapons and improvement of nautical qualities. Today, the Scorpion is the pinnacle of evolution in this type of ships. He is armed with an anti-ship missile "Yakhont" vertical launch. Its main advantage is the supersonic flight speed, which makes the rocket low-vulnerable for enemy air defenses. "Yakhont" has a range of 300 km, the mass of the warhead is 200 kg.

As for the case, it is very economical for the Scorpion, according to Yuri Arsenyev. If the previous generation of the Molniya launch rocket boat, which has a ton of 104 fuel on board, is 2200 miles, then the Scorpion with 64 tons of fuel has a range of 2500 miles when it moves at an economic speed of 12 knots. In addition, the hull of the boat is given the opportunity to self-stabilize on the wave, it is equipped with fodder spoilers, which are pitiful stabilizers. As a result, the pitching level of the boat decreases by a factor of 5.

The boat has a combined power plant consisting of two diesel engines for cruising modes of navigation and gas turbine GTU-12, designed to reach the speed of interception. GTU-12 drives a ventilated water cannon, developed at the Almaz Central Design Bureau. It consists of a shell in which a submerged screw operates at high speeds.

Artillery armament "Scorpion" consists of the installation caliber 100 mm A-190-5П-10. For air defense at the near turn, that is, at a distance of 5-6 kilometers, an anti-aircraft missile and artillery complex "Kashtan-1" is used. The ship is equipped with the active three-coordinate radar of the general detection of surface and air targets "Positive-ME1". It can detect at a distance of up to 150 km and accompany simultaneously up to 50 targets, ensures their classification and issuing target designation to the associated fire control systems.

Missile firing control is carried out by the Garpun-B radar 3T-25E. The active channel of this station uses a complex modulated signal that has the ability, working in the driving layer, to bend around the surface of the earth. Thus, the detection range, depending on the radio observation conditions, is up to 250 km, and during tests in the Indian Ocean, as Yuri Arsenyev said, the 400 km range was obtained. Thus, the Scorpion has the ability to trans-horizontally target designation directly on board, without the involvement of any external systems. 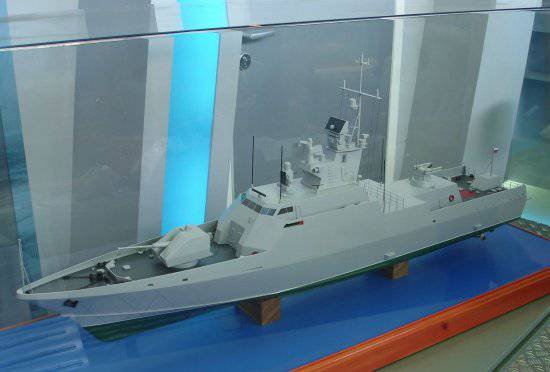 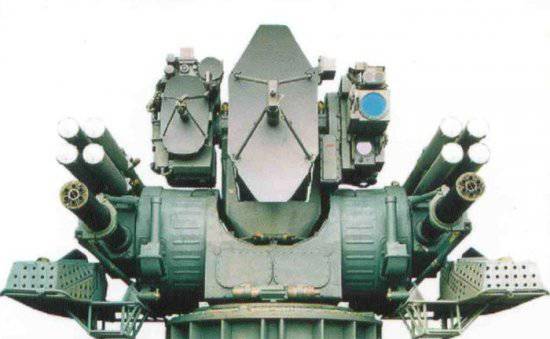 It was planned to build the head boat in 2005, then build a series for the Russian Navy - 10, for the FPS RF - 10 and before 30 boats for sale, the countries of the APR and a number of others were interested in the boat. Unfortunately, the project was "stalled", even the lead rocket-artillery boat was not completed. 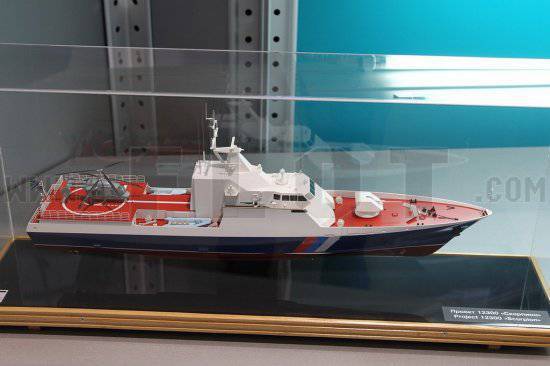 Promising project TsMKB Almaz - pr.12300 "Scorpion". The main feature is the presence of the runway, which allows to use light-class helicopters from the ship, and later - UAVs.