December 27 2013
34
The US Air Force is not going to abandon the idea of ​​becoming the owner of the "death rays". It's about laser weapons. At the end of February 2013, a document was published according to which a request was made for information about the possibility of developing airborne laser weapons that could be installed on promising fighters. The request was prepared by specialists from the US Air Force Research Laboratory. This refers to fighters that will go into service after 2030. The first laser weapons tests for 6th generation fighters are planned in 2022. It is worth noting that similar developments are underway in our country.


According to the requirements of the US military, they need a laser independent of aviation platforms, and a system that can operate at an altitude of 19,8 thousand meters above sea level at a flight speed of 0,6 to 2,5 Mach numbers (690-2900 km / h). By October 2014, the technological readiness of this laser will have to reach the fourth level, when all components of the system are created and go to the stage of laboratory testing. The fifth level is the testing of laser samples in air. It is planned to start them by 2022. The adoption of new weapons systems is planned for the period after 2030. Companies interested in fulfilling this order will have to provide the Air Force Research Laboratory with not only their projects, but also the estimated cost of the work.

According to a published request, the Pentagon is interested in three types of advanced weapons. The first of these is low-power lasers, which are used for targeting, tracking and target illumination, and combat enemy surveillance systems. The second type is medium power lasers, the main purpose of which is self-defense of an aircraft against enemy missiles. The third type is a high-power laser, the main purpose of which will be the destruction of targets both in the air and on the ground. 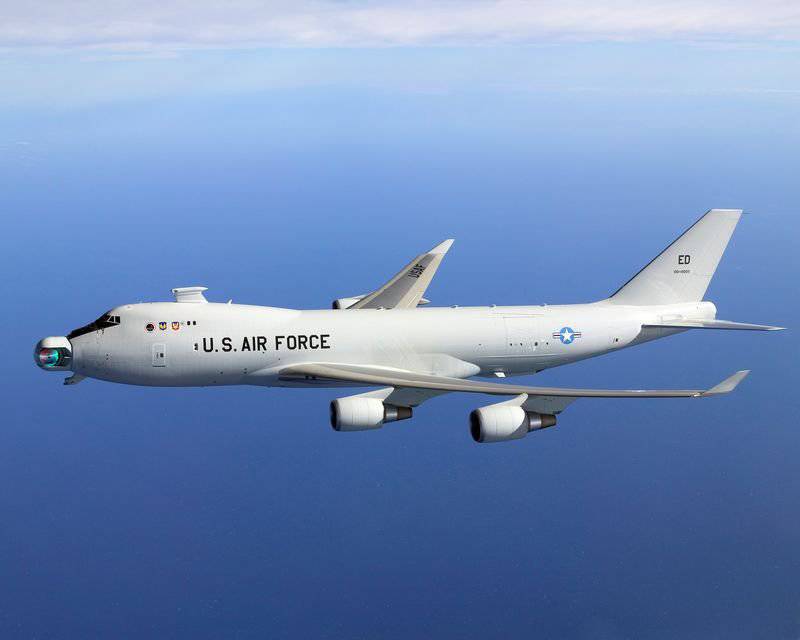 According to the US Air Force, sixth-generation fighters equipped with laser weapons will have to operate relatively freely where maneuvers are restricted or forbidden or in areas closed to flight. By these formulations, the US Air Force understands not only the fight against enemy air defense and aviation, but also the conditions under which the supply of provisions and spare parts are seriously hindered or seem impossible. This also includes the lack of financial and political influence in the region.

American sailors and pilots began to formulate a list of requirements for combat lasers, at the beginning of the 2011 year. It is assumed that funding for the project to develop full-fledged combat lasers will begin in 2015 year. Earlier, the US military said that, most likely, the fighters belonging to the sixth generation will be hypersonic vehicles that will have the option of piloting. It is assumed that such aircraft will be super-maneuverable and hardly noticeable; most likely, the largest American companies Boeing and Lockheed Martin will join the program for their creation.

Russia has something to answer

In Russia, it was also decided to resume work on the creation of a combat air-based laser. It is assumed that with its help it will be possible to disable not only aircraft, but also satellites, as well as ballistic missiles of a potential enemy. A similar weapon in the Soviet Union was developed since the middle of the 1960-s, it was then that an interest in the combat laser appeared. By 1973, a special design bureau was organized in the USSR. The first air-based laser unit was placed on the A-60 prototype, created on the basis of the Il-76 military transport. He performed his first flight with an A-60 laser on board in 1983, and in 1984, Soviet pilots were able to hit their first air target with a laser. By the 1991, in the USSR, the X-NUMX of the А-2 aircraft was already, however, with the collapse of the country, funding for this program was also stopped. 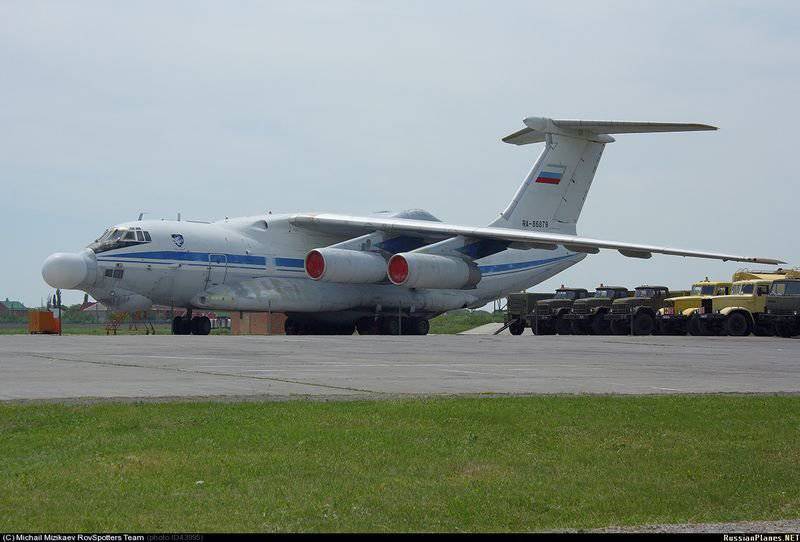 A-60 1A2
The aircraft — a flying laboratory for testing airborne lasers — was created on the basis of the IL-76MD military transport with minor design changes. Instead of the traditional meteorological radar, a bulbous fairing was mounted in the nose of the car, in which special equipment was placed. Most likely, there was a radar antenna or a lidar system aiming a laser installation. From the sides of the fuselage, covered with special fairings, the turbogenerators of the power grid were located, which ensured the functioning of the entire laser complex. The auxiliary power unit IL-76MD has been replaced by a more powerful one. The doors of the cargo hatch were dismantled, and the hatch itself is sewn up. On the plane there were no front emergency exits and the doors in the fuselage were modified.

The airborne laser machine was made without a fairing - it could retract into the aircraft fuselage. At the top of the fuselage between the wing and the keel housed sash, which included several segments. The flaps were cleaned freely inside the aircraft and the laser could easily climb into the opening formed. On the second prototype, which was designated 1А2, the laser machine was already under a special fairing, which was called the “hump”. The laser unit was in the fuselage behind the wing of the aircraft, its placement was structurally different from the first prototype 1А1.

After 1991, the work in the bureau was carried out almost on the personal initiative of the employees themselves. Only in 2009, the resumption of work on financing the development of aviation lasers was announced by full academic advisor to the Academy of Engineering Sciences of the Russian Federation Yuri Zaitsev. It was just about the same air laboratory A-60, which was installed "blinding laser". Its main purpose is the impact on optical homing heads of modern ballistic missiles, as well as on satellite observation systems of a potential enemy. At what stage this project is currently located is unknown. In 2011, funding was again suspended, but in 2012, it was resumed. 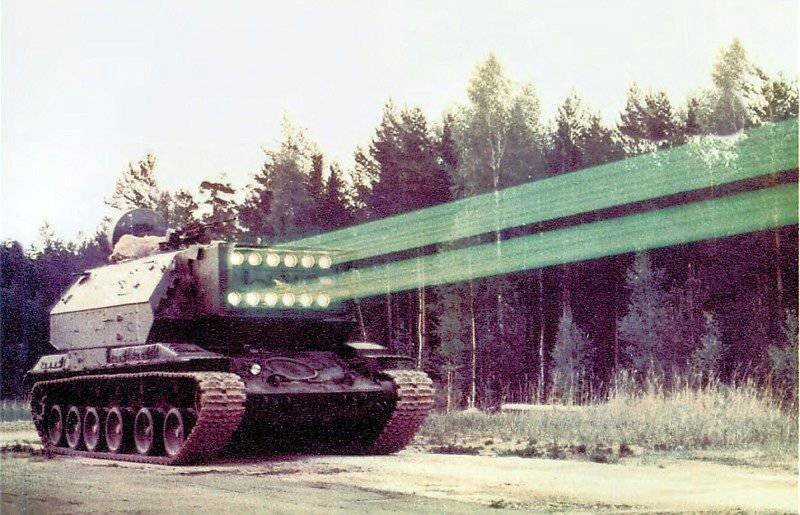 SLK 1K17 "Compression"
Financing work on the development of the laser is in the interests of the Ministry of Defense of the Russian Federation. A more powerful laser is planned to be delivered to the A-60, it is about installing the 1LK222, which was developed by Chemical Machinery. The works are carried out within the framework of the Sokol-Echelon R & D project by the Almaz-Antey Air Defense Concern. The lead developer of the 1LK222 laser complex is Almaz-Antey GSKB. At the end of 2011, all necessary design documentation was created in KB. Installation tests were scheduled to take place in the 2013 year, but first, the aircraft carrier will have to undergo the necessary upgrades. It is worth noting that the Russian military department has not yet decided on which planes combat lasers will be installed on. Most likely, it will be bombers and military transport aircraft.

In addition to the work on А-60, other works on the creation of laser weapons were carried out in Russia. So at the beginning of the 1990-s in our country was assembled a prototype of a mobile laser gun, which was deployed on the basis of ACS "Msta-S". The project received the designation 1K17 "Compression". The basis of this unique complex was a multichannel solid-state laser. According to unconfirmed information, an artificial cylindrical ruby ​​crystal with a total mass of 30 kg was grown specifically for the “Compression” installation. According to another version, the body of a laser could be an yttrium aluminum garnet, to which neodymium was added.

Self-propelled laser complex (SLK) 1K17 "Compression" was ready in 1992 year. Its main purpose is to fight a potential adversary with optical-electronic devices. It used a multichannel laser. There were a total of 12 optical channels (2 series of lenses), each of which had an individual guidance system. The use of a multichannel scheme allowed us to perform multi-band SLK. As a counter to such systems, the adversary could try to protect the optics by installing light filters that would block the radiation of a certain frequency. However, against simultaneous damage by laser beams having different wavelengths, light filters are useless. 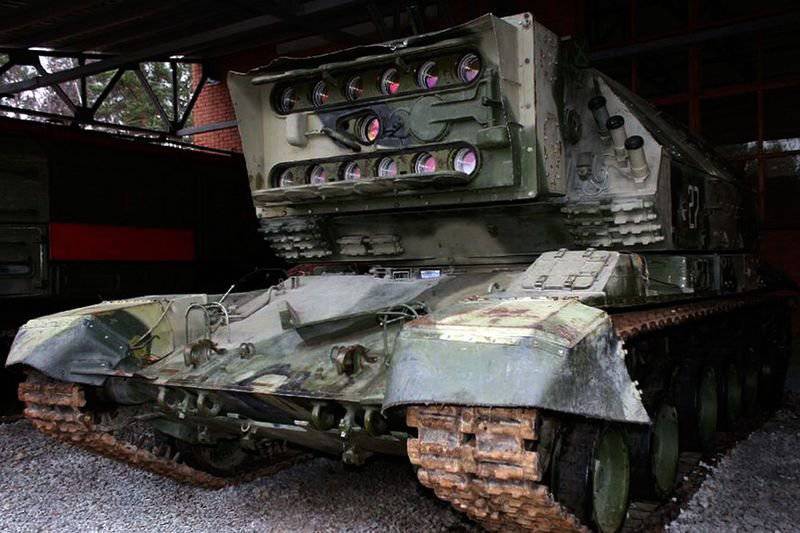 SLK 1K17 "Compression"
In this case, the main problem of any laser today is their very low efficiency. Even in the most complex and most advanced installations, it only reaches the level of 20%. Installation "eats" a lot of electricity. For this reason, high-power generators and an auxiliary power unit (APU) occupied most of the increased logging of the Msta-S ACS (which in itself was rather big), on the basis of which the SLC Compression was located. Generators were engaged in charging the capacitor battery, which gave a powerful pulse discharge to the lamps. At the same time, it was necessary to “fill up” capacitors with time; at that time the installation was useless. The rate of fire of the complex is probably one of its most mysterious parameters, as well as one of the most serious tactical flaws.

According to the brochures of NPO Astrophysics, the range of the SLC Compression was at least twice the range of modern tanks. Consequently, if the enemy’s hypothetical tank was approaching installation in an open area, it could be disabled even before it could open fire. On the one hand, it sounds tempting, on the other hand, direct fire is both an advantage and the main disadvantage of the laser complex. What is acceptable in the air is unacceptable on earth. Laser operation requires direct line of sight, but on land, even in the desert, a target 10 km away is hidden behind the horizon. Therefore, the SLK would have to be located on high ground, on public display, which is contraindicated in real combat conditions. In addition, on Earth, most of the theaters of war have at least some relief.

Contrary to common misconceptions, SLC 1K17 "Compression" did not fall under the UN protocol, which prohibits the use of blinding weapons, as the complex is designed to combat optical-electronic systems of military equipment, rather than personnel of units. At the same time, the use of laser weapons, for which the blinding of soldiers is a possible side effect of the work, is not prohibited.

In 1993, the project to create a self-propelled laser machine "Compression" was stopped. The only remaining copy of this machine is currently in storage in the Military Technical Museum, located in the village of Ivanovo near Moscow. However, given the increased interest of the Ministry of Defense of Russia in promising developments, many domestic air and ground-based laser complexes can count on a second life. It was for such purposes that Dmitry Rogozin in October 2012 of the year initiated the creation of the Advanced Research Fund in Russia (analogous to the US agency DARPA). Most likely, Rogozin will not regret the money for high-risk research and development.

Ctrl Enter
Noticed oshЫbku Highlight text and press. Ctrl + Enter
We are
The most promising US military projects, the use of which is possible for peaceful purposesProgram Terra-3 - complex 5Н76
Military Reviewin Yandex News
Military Reviewin Google News
34 comments
Information
Dear reader, to leave comments on the publication, you must sign in.