The project of the fighter tank type "Plastun"

Head of the Bureau of Invention Comrade. Moses

18 / V-43, we have submitted to you two proposals for tanks, the design of which we began jointly when my son was in Moscow for his work in the Autobase of the Council of People's Commissars of the USSR.

Currently, as you know, my son is in the 3 of the Leningrad Infantry School of commanders to study, therefore, two more proposals in this area that we have planned for development and more valuable, unfortunately, are without movement just because I don’t I can know the considerations of my son on the aforementioned proposals and cannot consult him at all on their development, etc.

In view of the foregoing, and in the interest of identifying the defense proposals mentioned, I beg you to give due attention and assistance in translating my son V. Kurochkin. to study in a Moscow school, this does not stop his studies, but at the same time we will be able to see and consult and quickly complete the development of our proposals and hand them over to you for consideration, etc. 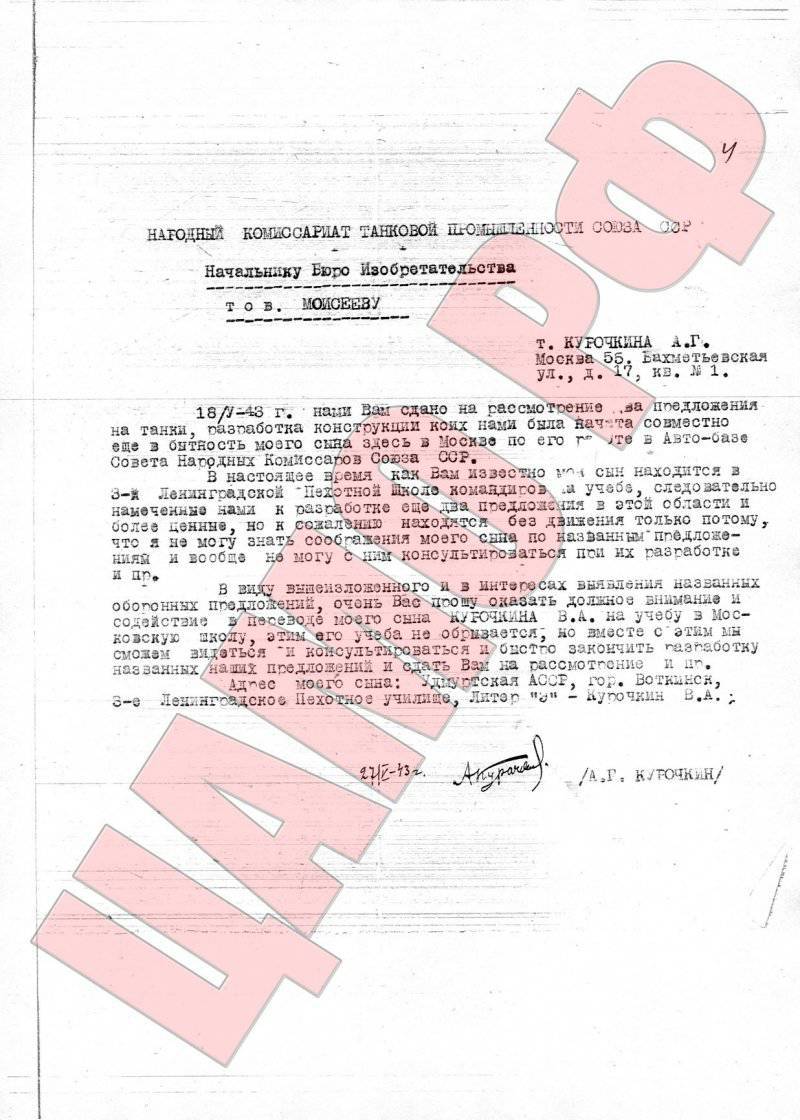 Consequently, in the presence of the abovementioned equipment, offensive actions of infantry in the open position with a rifle and with a grenade are ineffective and are associated with loss of manpower, etc., and when the infantry is forced to lie down, etc., then the situation also unprofitable, because it reduces the rate of attack and the conduct of the battle in general, and time in war is a decisive factor.

2) In order to dislodge the enemy from the fortified and populated areas, machine gunners and infantrymen make their way from the flanks and from the rear of the enemy and beat him with machine gun fire, a grenade and a bayonet.

These operations are also slow-acting and are associated with the loss of manpower, etc.

3) In the Red Army there are fighter squads whose task is to destroy enemy tanks with an anti-tank gun, grenades and bottles of flammable liquid. For this purpose, the detachments choose a suitable place for themselves, dig in and disguise and await the approach of the enemy tanks and strike at close range their. These operations are also primitive and ineffective, etc.

Taking into account the above-described and in order to replace the above-mentioned actions of the infantry with more powerful and operational military equipment, we propose to the application a fighter tank of the type "Plastun" "TYPE" with a low-lying body on a tracked course with a single gun, one grenade launcher and two machine guns, with crew of two persons, the following design:

"TYPE" consists of a low-lying hull (1) (see drawing) with driving wheels (2 and 3) on tracks (4), while in order to avoid destruction by a projectile, etc., the crawler on the sides is closed by a removable wall (5) convex form and attached to the hull of the tank (mount on the drawing is not specified).

The TIPA engine compartment is located at the rear of the case (6), is hermetically sealed with a lid (7) on its hinges (the location of the motor is not indicated in the drawing), and there are hoods (8) on the sides that enter the air and follow through slots (9 ) (see drawing, fig. 1 and 3) inside the engine compartment, the last from the general room of the tank is insulated with a wall (10) (see drawing, fig. 3) in order to avoid the spread of fire throughout the tank branch.

The movement of the above-mentioned double hatches with firearms makes it possible to conduct aimed fire with the movement vertically at approximately 20-25 degrees, and along the horizon with movement of approximately 30-40 degrees on both sides of the tower.

TYPE dimensions: length 2,8 m, width 1,8 m, total height along with the tower of all 0,67 m. The crew consists of two people: a driver-machine gunner and an arrow (the TYPE can be easily serviced by female staff). TYPE in its combat purpose and such minimal dimensions should have a driving speed of approximately 65-70 k / h.

The action of the TYPE is as follows: the crew enters the tank through the turret (11), where it takes its place in a reclining position, for this purpose there is an airbag (not shown in the drawing) inside the turret, on which the driver and the shooter are located backwards, after which the turret closes a lid (12), after which the TYPE is ready for battle (the tank control system is not indicated on the drawing), while in long-range combat conditions, the tank conducts targeted fire while on the move from a cannon (15) and machine guns (19), and in close combat conditions 20-30 meters more efficiently To fire from a grenade launcher (16), for example, to destroy enemy tanks, a grenade is thrown under the tank from the front or side, etc., where it is under the action of a constant distance tube (such as a hand grenade) and is torn apart, which destroys the enemy’s tank. the bunkers of the enemy pillboxes and bunker grenades are thrown through the embrasure inside, where it also breaks and destroys the fortifications, also grenades are thrown into the trenches and into the trenches, where the enemy’s manpower and equipment are destroyed, which explains the effect of TYPE to destroy the enemy’s manpower and equipment, therefore, the TYPE is a formidable comparison of the enemy’s technology, being itself elusive due to its small size at high speed, etc., which is compared with the 1, 2 and 3 points of this description.

Tank-fighter type "Plastun" "TYPE" new design, designed for use in the Red Army in hostilities. 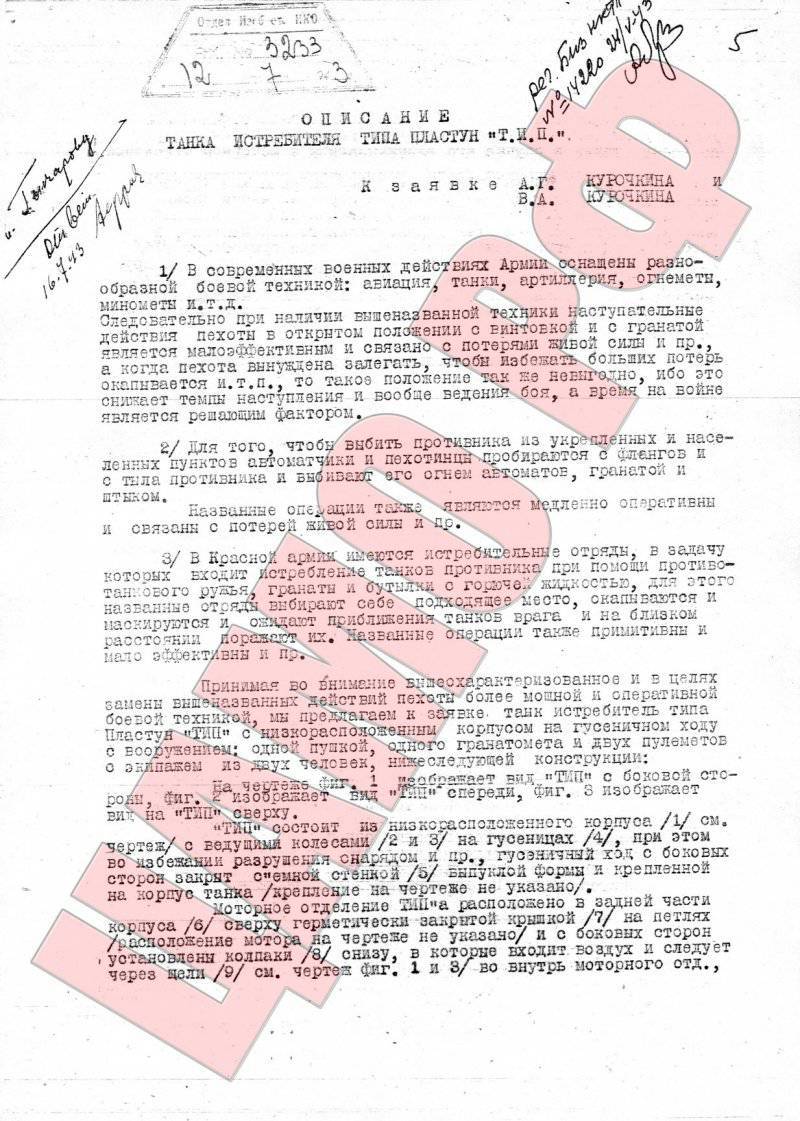 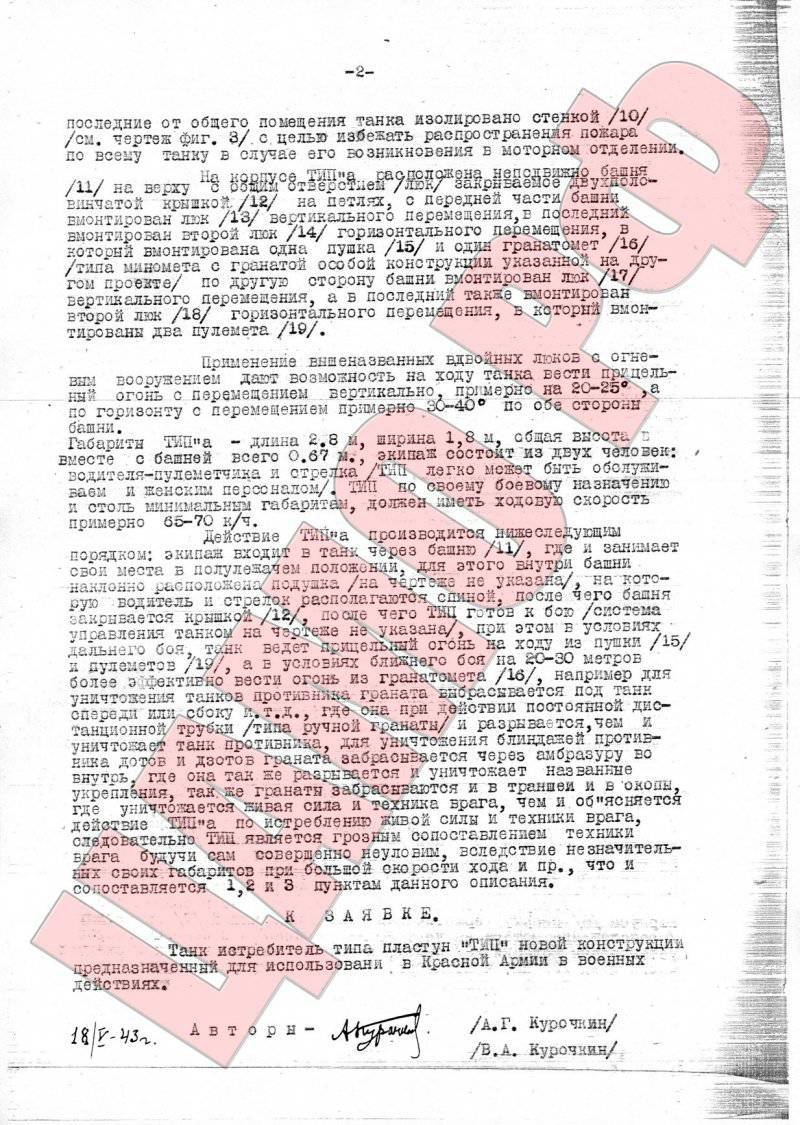 Ctrl Enter
Noticed oshЫbku Highlight text and press. Ctrl + Enter
We are
Middle tanks in the postwar period. "432 Object"Wunderwaffe for Pantservaffe. Description of the design of the tank "Mouse"
Military Reviewin Yandex News
Military Reviewin Google News
4 comments
Information
Dear reader, to leave comments on the publication, you must sign in.