The answer is the Islamists. Egypt officially declared the Muslim Brotherhood a terrorist 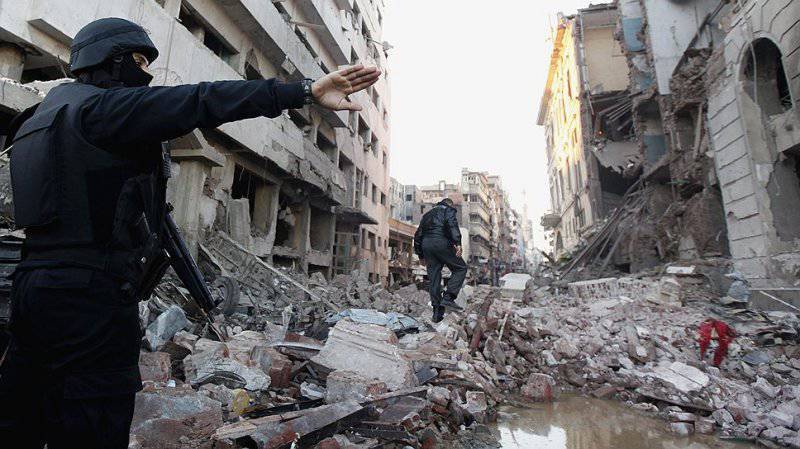 Without waiting for the end of the investigation, the Egyptian authorities declared the Muslim Brotherhood movement a terrorist group. Now, any activity of the Islamist movement, both within Egypt and abroad will be considered illegal, as well as the membership in the "Brotherhood". The reason for such a tough reaction was the massive December 24 terrorist attack in the Egyptian city of Al Mansour. According to experts, the Egyptian military thus want to deliver a crushing blow to their main opponents on the eve of the referendum on the new constitution, which is scheduled for January, and early elections.


An explosion thundered at the police station and took the lives of 15 people, including 8 law enforcement officers. About 200 people were injured. The radical wing of the Muslim Brotherhood Party, which was removed from power through a military coup, immediately fell under suspicion. Radical Islamists have rejected their involvement in this explosion. The Brothers published a statement condemning the terrorist attack against the Egyptian people and demanded fair punishment for the terrorists. Somewhat later, militants from the Ansar Beit al-Maqdis group, which is linked to al-Qaeda, took responsibility for the terrorist act. They reported that this action is revenge on the new Egyptian authorities for the "innocent blood shedding of Muslims." Recently, law enforcement agencies and the army arrested many members of radical organizations, conducted a series of operations in Sinai, which turned into a stronghold of terrorists and bandits.

However, the authorities blamed it on the "Brothers". “The Muslim Brotherhood” is a terrorist association that showed its ugly face, shedding blood and encroaching on the security of Egypt, ”said Prime Minister Hazem al-Bablaoui. Even before the end of the investigation, Interior Minister Mohammed Ibrahim hurried to declare that the terrorist act was a response to the actions of the security forces, which in the summer destroyed the Muslim Brotherhood’s tent camps, which continued to protest against the military coup and the arrest of Mohammed Mursi. The press releases of the Egyptian army, which are devoted to counter-terrorism operations, actually make no distinction between the Brothers (although the Freedom and Justice Party they created was recently the leading political force in Egypt) and militants of radical Islamist groups. In the official propaganda, the Muslim Brotherhood is equated with al-Qaeda.

December 26 in Cairo there was a new explosion. An unknown man threw a bomb near the bus. As a result of the explosion, one person died, four were injured. During the investigation of the scene, two more explosive devices were found in a nearby park. The Egyptian Ministry of the Interior responded by closing the Muslim Brotherhood newspaper, the Freedom and Justice newspaper, and the entire issue was withdrawn. In addition, the Ministry of Internal Affairs of Egypt has received an order from the prosecutor's office to detain seven members of the movement.

Now any activity of the organization is considered illegal. "Brothers" are forbidden to go to the protests. Anyone who is part of the Muslim Brotherhood, finances them, promotes their views, will be punished. The Egyptian authorities are planning to block all financial flows, freeze the accounts of a huge number of non-governmental movements that are associated with the "Brothers". Under the control of the authorities will be taken hundreds of schools that were "sponsored" movement. All this should, according to the Egyptian government, strike at the grassroots organizations of the Muslim Brotherhood movement.

The court declared the movement outlaw in September. Attempts by the Muslim Brotherhood to appeal against the sentence failed. Moreover, new charges were filed against ex-President Mursi. He is accused of “financing terrorism”, preparing the “Brothers” for fighting, relations with foreign structures (espionage and high treason), as well as the organization of the “Great Escape” (organized attacks on prisons, as a result of which thousands of prisoners escaped) . The ex-president of Egypt faces the death penalty.

On Tuesday, former Prime Minister Hisham Kandil was arrested. He was the youngest head of the Egyptian government, after which President Mohammed Mursi appointed him to this position in July 2012. His main task was to represent Egypt. After the overthrow of the military Mursi head of government kept in the shadows. However, he did not avoid arrest. Kandil, not seen in high-profile actions or political statements, as well as influential leaders of the movement, was arrested. During the execution of his duties as head of government, Kandil was sentenced by the court to one year’s imprisonment with the phrase “for contempt of court”. He was accused of failing to comply with the decision to nationalize a private company privatized in 1996.

In principle, the "Brothers" are not accustomed to such conditions. They have been repeatedly banned. The Muslim Brotherhood’s activities in Egypt were banned after the unsuccessful assassination attempt on President Gamal Abdel Nasser in 1954. From that time on, they were for a long time in an illegal situation, representatives of the movement united with registered parties or acted as “independent” candidates.

The Muslim Brotherhood has already stated that they will not stop protest activities, and the government’s actions have not caused a special reaction from them. “For us, this decision has never existed. For us, it does not matter, it costs only the paper on which it is written. It will not affect us in any way, ”said one of the members of the movement, Ibrahim Elsayed. Another representative of the "brotherhood", Islam Taufik, said that the Muslim Brotherhood could challenge the statement in the Egyptian courts or appeal to foreign organizations.

Now the organization will go underground, perhaps the radical wing is activated, will respond with terrorist strikes. Will the authorities be able to quickly suppress this movement, or in Egypt we will see the “Iraqi scenario”, with almost daily terrorist attacks, religious killings, bombings of mosques and churches, attacks on government agencies, police and military facilities? It is impossible to predict. The Egyptian people can only sympathize. The Egyptians plunged into a bad throat, starting with the destruction of the regime of Hosni Mubarak. Now many Egyptians remember with nostalgia the rule of Mubarak: in his country there was a relative order, stability, incomes of the population were higher than after the revolution. After the opposition of supporters and opponents of Mubarak, the candidate Islamist Mohammed Mursi won the elections. But that was not the end of the confrontation. The Islamists could not normalize the situation in the country. “Tightening the screws” led to a new protest wave, which ended in a military coup. The military arrested the president and created a new temporary (transitional) government. The Muslim Brotherhood went into opposition.

All three regimes - Mubarak, Mursi and the military - suggest a tough authoritarian model of governing the country. Otherwise, the 85-million country can not be kept. The conflict got its development. The future of Egypt, which by virtue of its stories, geographical location and population, is a key country in the region, lost in the haze of the "Arab spring", growing into the "Arab winter".

Apparently, the authorities will not be able to easily solve the problem of the Muslim Brotherhood. At present, the organization has no less supporters than the authorities. Banning an organization that has strong support from ordinary people and repression will only increase the number of supporters of the Brothers. The military coup of July 2013 of the year aroused a certain enthusiasm, especially against the background of the helplessness of the Mursi regime in solving social and economic problems, rising unemployment, reducing tourism business. However, it has already passed. Now people are unhappy with the military junta. This is especially true of young people, who played the role of shock force in the fall of Mubarak’s power. The current authorities also could not solve the problems facing Egypt. They only strengthened Cairo’s financial dependence on the Arab monarchies, which with their money delayed the onset of an economic collapse.

Moreover, it is obvious that in the summer an anti-democratic coup took place, because Mursi came to power completely legally. The Egyptian military has twice proved to be the wrong side. From the beginning, they surrendered President Mubarak, not becoming to defend the legitimate authority, and then overthrew Mursi, although the Brothers won the election completely legitimate. So, considering all this, one should not expect that the situation in Egypt will stabilize in some fantastic way in the near future. Most likely, soon we will see some new political upheavals. The Muslim Brotherhood will completely go underground, loosening the already weak power. Then everything is covered with darkness.

It must also be said that the permanent revolution in Egypt and the “Arab Spring” are connected not only with internal prerequisites, but also with the actions of external players. From the very beginning of the so-called “Arab spring” in the West, they knew that radicals would come to power. This is a classic of the revolutionary process. Power is always seized by the most resolute and cruel. It suited the West. In the West, from the very beginning, they wanted to destabilize Egypt and the Middle East.

The United States has staked on a full shift in the political system of a vast region, from Central Africa to Central Asia. The region was plunged into permanent chaos. The Americans left the Middle East, plunging it into chaos and drawing into it all the major regional (Saudi Arabia, Iran, Turkey and Israel) and global players (Europe, Russia and China). It was a long game. The revitalization took place in 2001, when a terrorist attack was organized in the United States, which allowed Americans to behave in the Middle East as an elephant in a china shop. The Western world is in a systemic crisis and it needs sacrifices in order to hold on for some time.

Regional players such as Saudi Arabia and Qatar supported the US game, but with their own goals. Qatar wanted to bring moderate Islamist governments to power that would advance Doha’s economic interests. Qaddafi’s regime in Libya was especially hated by Qatar. The objectives of Saudi Arabia were much more serious. Riyadh wanted a complete reformatting of the region, the elimination of old borders, the fragmentation of large states, the destruction of potential adversaries like Libya. The goal is the “Arab European Union”, the transformation of the Cooperation Council of the Arab States of the Persian Gulf into a full-fledged Union, with the absorption of the wreckage of destroyed states. And for this you need a large-scale chaos, which must completely destroy the old political system. Riyadh could not act openly. He used excellence in information and financial resources. The tool of the Kingdom became the Salafists (Qatar relied on the “Brothers”) and their cosmopolitan ideology. States were destroyed by blows from the inside. Fortunately, in each state there were serious contradictions that, with skillful influence, led to the necessary result. Why fight if you can use the resources of the enemy? The population itself, in pursuit of the illusory dream of a “beautiful and free” life, destroys statehood and draws the fatherland into a permanent revolutionary process.

In general, Riyadh won up in Egypt, supporting the military junta in July 2013 of the year, beating the “Brothers” of the key country in the region. However, the Saudis faced new problems: the United States refused to support gangs in Syria (possibly temporarily) and renewed relations with Iran, the main enemy of the Kingdom. Therefore, the main battle in the Middle East region is still ahead ...

Ctrl Enter
Noticed oshЫbku Highlight text and press. Ctrl + Enter
We are
Radical update of the Chinese armyBan flights to Egypt. What happened to the plane and what awaits the Russian tourist business?
Military Reviewin Yandex News
Military Reviewin Google News
15 comments
Information
Dear reader, to leave comments on the publication, you must sign in.