How many times is Putin more popular than Medvedev, or How do Russians unwind the tandem

December 27 2013
100
At the end of the year, VTsIOM, according to the tradition that has developed in recent years, publishes a rating of “people of the year”. The rating is based on sociological polls of Russians in different regions of the country with the percentage of error 3,4. Topics of sociological research concern various fields of activity: from art to politics. And if we consider the political division of the poll conducted by VTsIOM, then it took the first place on its results ... no, no sensation is to be expected here - Vladimir Putin.


If you believe the statistics presented by the All-Russian Center for the Study of Public Opinion, then Putin as the person of the year was voted 44% of respondents. Since 2009, Vladimir Putin, if I may say so, has maintained his position in the ranking compiled according to the results of a sociological survey according to VTsIOM. But the 44% result for the current head of state was far from a record for all the years of such surveys. The record did not take place, but it should be noted that Putin “did not go” to the anti-record either.

In 2009, Vladimir Putin was named 50% of respondents by the person of the year (according to the version of the same VTsIOM), in 2010, 55% of respondents voted for him. But in the 2011 year, Vladimir Vladimirovich expected, let's say, the electoral decline - only 38% (“all” - this is not in comparison with other politicians who were called by the respondents, but in comparison with the results regarding himself). Political scientists have announced the main reason for the significant decline in popularity of Vladimir Putin following the results of 2011 of the year (again, in comparison with his own popularity of the sample of previous years), the decision to run again for the presidency in 2012. Apparently, many respondents felt that Putin’s decision to castling with Medvedev, at that time, was questionable. However, as early as next year (when Vladimir Putin was elected president), his popularity (at least in VTsIOM estimates) went up again - 54%. By the way, intermediate polls (including polls organized by other sociological services) in the 2012 year showed that the president’s public rating did not reach 45%. In the final part of 2012, the presidential rating made a significant leap, probably due to the noisy resignation of Defense Minister Anatoly Serdyukov and the appointment of Sergei Shoigu to this position.

The current result in 44% is in fact a repetition of last year’s result in the sense that if it were not for the November resignation of Serdyukov, then so would the president in 40 and 45-2012% would have remained. This year, no breakthrough anti-corruption decisions were made, on the contrary, the epic with the persons involved in the Oboronservis case finally went into the plane of a protracted “soap opera”, and some selected articles of the Criminal Code of the Russian Federation for these same defendants - into the plane of comedy ... It is possible that caused a relatively low result.

But 44% support is far from small, especially considering the correlation with the “vtsiomovskimi” ratings of other Russian politicians. From 2009 to 2012, Dmitry Medvedev "held" second place (right after Putin). For these years, 33, 37 and 19 percent voted for him, respectively. This year Medvedev conceded not only the second position in the rating, but also generally “rolled back” to the fifth line - to the level of popularity of Gennady Zyuganov and Alexei Navalny ... Sergey Shoigu rose to the second (“ex-Medvedev”) position in the rating, though , total 8% votes. Third place, the Russians who participated in the survey, gave Sergei Lavrov (a percentage less than Shoigu). 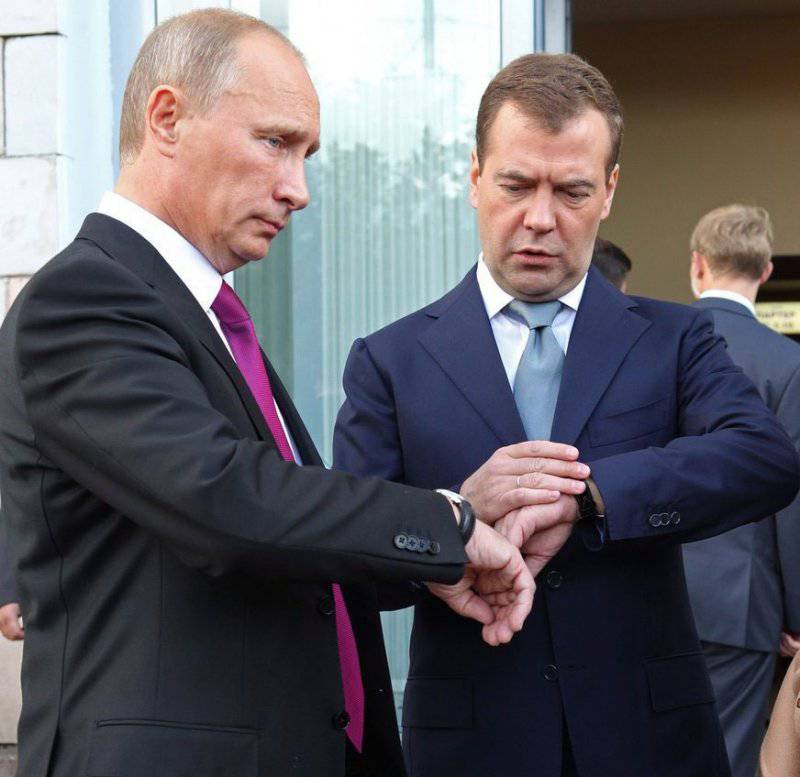 Interestingly, one of those Russian politicians who have been distinguished, let's say, by rating stability over the past few years, is Vladimir Zhirinovsky. According to the results of the last five public opinion polls for the presence of a “policy of the year” in the country, the leader of the Liberal Democratic Party stably ranks among the top four. In 2009, its result was 6%, in 2013, too, 6%. This suggests that Zhirinovsky has a stable electorate who is ready to accept his leader in any state with any political and near-political proposals.

By the way, Zhirinovsky bypassed the prime minister this time. This year Medvedev has a real anti-record - only 5% of the votes cast. If we evaluate the popularity of Russian politicians in society, then it turns out that Putin is now more popular than Medvedev almost 9 times ... This ratio of popularity in the "tandem", which, even judging by the voting results, has finally stopped to appear in tandem, is observed for the first time since Dmitry Medvedev appeared in "Top layer" of the political beau monde of the country.

In addition to the survey, the VTsIOM conducted public opinion research during the year to determine which of the politicians most trusted by Russians (you could choose 5 or 6 surnames during voting). At the end of the year, a greater number of Russians will entrust (here, too, without political sensations) Vladimir Putin - about 47%, Dmitry Medvedev continues to be trusted by 11%, Gennady Zyuganov and Vladimir Zhirinovsky - according to 7% who participated in the vote. At the same time, Vladimir Zhirinovsky was the most “untrusted” politician. 18% of respondents do not trust him. Every 10 interrogated doesn’t trust Putin.

Not without interest is the fact that after conducting a sociological survey on the title of the most popular politician in the United States (the survey was commissioned by NBC), first place there (no less predictable than our Vladimir Putin) was occupied by President Obama with a result of 44%. NBC and VTsIOM "gave" the two presidents an identical number of votes (as a percentage). It turns out that both the Russians and the Americans do not yet see more impressive politicians in their countries than the current presidents, but at the same time (judging by the results) they expect more efficiency from their work.

Ctrl Enter
Noticed oshЫbku Highlight text and press. Ctrl + Enter
We are
Results of the week. “I would not live my life differently if I had such an opportunity”Data on the attitude of Russians to the Russian army and the Minister of Defense
Military Reviewin Yandex News
Military Reviewin Google News
100 comments
Information
Dear reader, to leave comments on the publication, you must sign in.