The wrong side of tolerance

December 26 2013
219
In the largest British retail chain "Marks and Spencer" (600 stores in the UK alone), there was a scandal due to the notorious tolerance. It turns out that the Muslim cashiers, for religious reasons, decided to no longer serve customers whose carts are filled with pork and bottles of alcohol. It’s hard to imagine an Englishman without a bottle and eggs and bacon, and therefore the decision of the management of the M&S network, which allowed them to completely ignore the pig-eaters and the whiskey, shocked the British people. This very people announced via the Internet that they would collect signatures and boycott the trading network, thereby depriving it of profits. 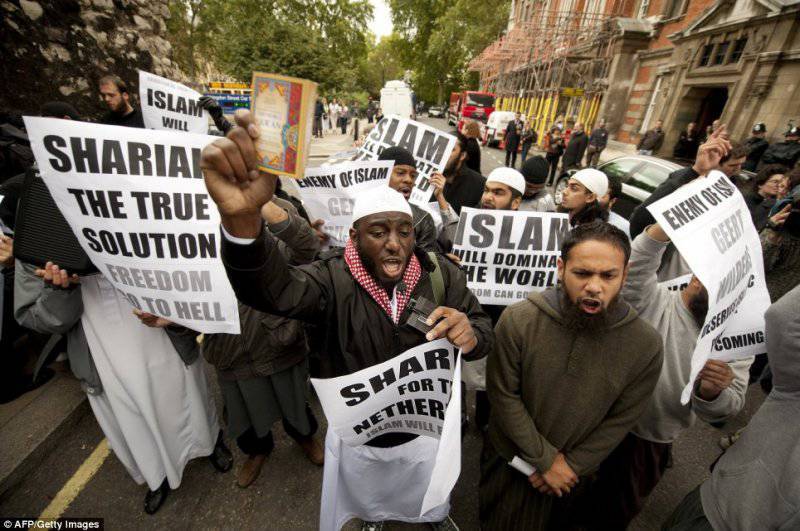 The press notes that the aforementioned M&S cashiers were dressed in “traditional Islamic clothes”. The denial of service was given in the form of advice to wait for another cashier who does not need to comply with Sharia law.

“I took the champagne from the shelf and went to the checkout where a woman was sitting in a scarf. What was my surprise when she refused to accept my purchase, saying that I should stand in a different place or wait for her replacement to arrive, - Told one of the residents of London. “We have never had this before.”

Initially, the management of M&S explained to the general public via the Internet and the press that the retail network takes into account the wishes of the workers: there should be no discrimination. Shocked buyers simply fell into a stupor: that is, what is it? .. The company does not want to discriminate against cashiers, so now it will discriminate against buyers?

The management of the chain's stores, not wanting to lose profit, remembered from a fit of tolerance.

A new statement was made, according to which the instructions of “some managers” of the network were misinterpreted by the working staff, and no discrimination of buyers in the stores is provided. Anyone can buy pork, whiskey and champagne in any quantities.

As for the employees, their management promised to put them behind the counter with groceries and textiles.

Earlier, in early December, a group of London-based Islamists led by Sheikh Andzim Khudari, the head of the Al-Mudzhakhurun ​​grouping (banned in the UK), held a share One of the most popular tourist areas in the British capital is Brick Lane.

Islamists demanded to ban the sale of alcohol to the owners of many shops and restaurants located here. Those who violate Sharia law, the protesters promised to punish them with forty blows of whips.

In institutions selling alcohol, letters were left with the requirements. Moreover, Khudari made a speech. According to him, fellow believers cannot live among infidels and see “evil” around them. Then the sheikh promised that “this is just the beginning,” notes the Voice of Russia correspondent Yevgeny Zimin.

The British objected rather sluggishly: several members of the “English League of Defense” defiantly drank beer on the street.

Nikita Sorokin ("Voice of Russia") recalls that back in February, 2011, David Cameron, in a speech at the annual Munich Security Conference, spoke about the threats of multiculturalism. Earlier, the failure of multiculturalism was publicly recognized by Angela Merkel and Nicolas Sarkozy. British and European society as a whole realized that multiculturalism transcends the boundaries of reason.

Sergey Mikhailov, an expert at the Russian Institute for Strategic Studies, notes that in the next twenty years, the demographic situation in Europe will begin to change faster.

Radical Islamists are indeed advancing on the way of life of the native Europeans. A few years ago, the Islamic community in Britain demanded to cut Piglet out of a fairy tale about Winnie the Pooh, and also to withdraw from the sale of toy pigs: their appearance should not offend the "eyes of Muslim children."

On the streets of London you can find “Sharia patrols” - a group of Muslims who protect the principles of religious morality from Londoners and tourists. "You are in the territory of Islam." This means: you can not drink beer, it is forbidden to wear mini-skirts and shorts.

Most Muslims inhabiting Europe today are confident: religious rules are more important than the secular laws of the countries where they live. Such a belief is shared by 66% of the followers of Islam, registered in the EU.

Netherlands newspaper "NRC Handelsblad" опубликовала the results of a study conducted by the Berlin Center for Sociology. Experts interviewed 12 of thousands of migrants who profess Islam and live in the Netherlands, Germany, France, Austria, Sweden.

Sociologist Rood Kopmans noted that "there are a large number of Muslims in Europe, about 45% are confident that the West wants to destroy Islam."

"Wants to destroy"? The West, we note, is quite tolerant. For example, recently the President of Germany Joachim Gauck spoke at the University of Münster. And he said that Muslims are an organic part of German society. And he gave statistics: “There are more than two thousand mosques and other places of worship of Muslims in various German cities.” Moreover, the president announced this at the opening of the Center for Muslim Theology at the University of Munster. Gauk believes that the opening of such centers is a momentous moment in modern stories Germany. “Creating faculties providing education in Islamic theology is a very pragmatic groundwork for the future,” stressed the president.

If this is the destruction of Islam, then Europe has chosen a clearly too complicated path. The phrase “pragmatic groundwork for the future” is the apotheosis of tolerance. Especially considering the fact that 4 of a million Muslims live in Germany - only Paris is ahead of Berlin in Europe.

According to preliminary estimates, by the year 2025 there will be 40 million Muslims living in the EU. Today in some countries the number of mosques exceeded number of christian temples. German political scientist Alexander Rahr says:

“Islamic migration to Europe today has reached such limits that it cannot be prohibited or canceled. Therefore, it is necessary to find forms of cohabitation of two worlds. It is difficult to say what Europe will look like in thirty or forty years, how much the Islamic factor will be stronger or weaker than it is now. But the fact that most, if not all European states, today have no other alternative than a multicultural society, is an indisputable fact. ”

However, things are not so good at the state level in France.

The other day, the French Minister of Education, Vincent Pillet, confirmed that France would maintain the ban on wearing the hijab and niqab in schools, despite advice and warnings from government experts not to do so.

Earlier, the State Council, which brings together experts whose opinion the government addresses in complex administrative issues, issued a report where saidthat the “ban on hijab” violates the principle of religious neutrality of state institutions.

Minister Piyo insists on a ban, and he successfully appeals to the same report: after all, it says that “schools may introduce internal rules governing the wearing of religious clothing and decoration”.

In Denmark, too, not everything is "fine." The far-right "Danish People's Party" announced that will vote in parliament against the current procedure for granting citizenship, through which hundreds of immigrants, especially Muslims, will be able to obtain citizenship.

If the legislative amendments of the "People's Party" pass, then people from Muslim countries will not be able to obtain Danish citizenship.

This is only the last News.

Earlier, a high-profile event was the congress of the Italian political party League of the North, which took place on December 15 in Turin. Actually writes "Russian line" With reference to Pravoslavie.ru, he became the congress of all European conservatives who advocate for the protection of the family and traditional Christian values. From Russia, the forum was attended by State Duma Deputy Viktor Zubarev and Ambassador of the World Congress of Families in the UN Alexey Komov.

The forum was also attended by the deputy president of the National Front of France, Louis de Dan, the creator of the anti-Islamist film Fitna, the leader of the Dutch Party for Freedom Geert Wilders, representatives from Austria, Sweden and others. From Italy, the mayors of more than twenty cities participated, the governor of Lombardy, as well as members of the European Parliament from the "League of the North".

The Italians are greatly dissatisfied with the rise of the Islamization of Italy and Europe as a whole. Liberal migration policy has also been criticized. Congress delegates demanded the return of European sovereignty.

Nikita Sorokin ("Voice of Russia") recalls that in France, in October 2012, Islamists, on pain of death, ousted the owners of wine and meat shops from the territory of the market in Nîmes. In Belgium, Muslim extremists promised to "kick out" the Belgians outside the kingdom. In Spain, the tolerant leadership of the Real Madrid football club removed a cross from its emblem, which symbolized the patronage of the king from 1920 of the year.

Many experts are sure: the number of immigrants in Europe will grow, and they assimilate the Europeans, and not the Europeans - them. If you still remember how strenuously the authorities of other countries - like the same France - promote same-sex marriages and generally seem to serve the gay community, it becomes clear that Patrick Buchanan’s words about the decline of European civilization somewhere by the end of the XXI century are not a gloomy forecast futurist pessimist, but the opinion of the most ordinary realist.

Observed and commented on Oleg Chuvakin
- especially for topwar.ru
Ctrl Enter
Noticed oshЫbku Highlight text and press. Ctrl + Enter
We are
Results of the week. "Whose will you be?" Whose serf, I ask? "Results of the week. “I would not live my life differently if I had such an opportunity”
Military Reviewin Yandex News
Military Reviewin Google News
219 comments
Information
Dear reader, to leave comments on the publication, you must sign in.