Construction of the Eurasian Economic Union. Will there be new floors?

December 26 2013
117
Recently, a meeting of the EEEC, the Supreme Eurasian Economic Council, was held in Moscow. The meeting was attended by the leaders of three states - the Russian Federation, Kazakhstan and Belarus. The main task that Putin, Nazarbayev and Lukashenko set themselves before the start of the meeting was to prepare and approve documents providing a legal basis for the creation of the Eurasian Economic Union.


The signing of the so-called sectoral part of the treaty is scheduled for the middle of next year, and before that it is necessary to resolve technical issues of interaction between the three countries. According to the plans, the Eurasian Economic Union itself will begin its full-fledged work from January 1 2015. And in order for plans to become a reality, certain efforts are being made today. How effective are these efforts? If we take into account that Vladimir Putin proposes to intensify work, including through the ministries of the three countries, then, probably, the work on creating the field for solving the triune task will probably not go as many would have liked. 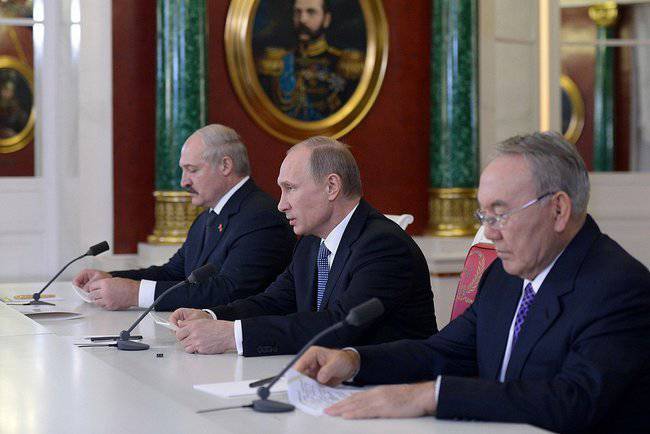 Some impressive work on the contract by the three presidents was the reason for publications in the media sustained in the spirit: if they do not work too fast, it means that neither the President, nor Lukashenko, nor Nazarbayev needs the Eurasian Economic Union as such. They say that the mentioned political leaders are afraid to coexist under a single economic overhang, and even more so do not take the risk of taking the bull by the horns and starting full-fledged political integration.
Are leaders afraid or not? - Only the leaders themselves can answer this question, and then only to themselves. However, if the presidents of Belarus, Kazakhstan and Russia did not have any political will for Eurasian integration, then it would hardly have been any plans at all, and it is unlikely that after each of these meetings a number of important documents were adopted. By the way, in this regard, it would not be superfluous to present the statement of one of the presidents - the leader of Belarus, Alexander Lukashenko:

If we do not make the Eurasian Economic Union work within the timeframe we have defined — from January 1 to 2015 — this will be a shame for all of us.

In our opinion, the most important issue related to the further development of integration is the creation of a new association on the basis of the Customs Union, in which there are no exceptions and restrictions on trade in goods between the participating countries. After all, it was in the freedom of movement of goods that we stepped as far as possible. Full freedom of movement of goods should set an example for the realization of other freedoms in the areas of services, capital and labor, enshrined in the basic agreements of the Common Economic Space.

In this statement, the President of Belarus exposes the very cornerstone - the main problem that the presidents are trying to solve. The problem is in the presence of those “exceptions.” These exemptions prevent the full-fledged tripartite movement of goods and services, create problems for the cooperation of financial organizations in Russia, Belarus and Kazakhstan.

During the meeting, Vladimir Putin also spoke on this issue:
It is required to complete the codification of the entire legal framework of the Customs Union and the SES, eliminate the remaining exemptions from the general trade and investment regime, and ensure the freedom of movement of goods, services, capital and labor resources.

The very problem of the presence of such barriers to Putin and Lukashenko was raised by Nursultan Nazarbayev, saying that while in the framework of the Customs Union the actual inequality persists, from which, he said, it is necessary to get rid of in the near future. The need to get rid of barriers, of course, is overdue, not only because the President of Kazakhstan mentioned this, but also because of objective economic reasons: the observed slowdown in the growth of mutual trade. There is growth, but it is not the one that was predicted by many experts to the current moment. The main reasons for the slowdown in the growth of mutual trade, according to a number of economic experts, was Russia's accession to the World Trade Organization, as well as the presence of the very barriers that remain unresolved in the space of the Customs Union.

In order to get rid of “exemptions”, the working groups have about six months, and then another six months to build at least the first floor of the building of the Eurasian Economic Union, letting in new settlers, and starting building new floors, if there are good reasons for this.

During the meeting, the WEC was raised and the theme of the expansion of the Customs Union. In recent years, it is clearly not rising for the first time, but only now have the contours of the vehicle become outlined by January 2015. It is planned that precisely at this point (the beginning of 2015), the Customs Union will grow Kyrgyzstan. In the coming months, the so-called roadmap for joining the CU of Armenia will be discussed. True, the exact date of the appearance of Armenia in the framework of the union has not yet been called. But Serzh Sargsyan’s position on this issue is well known. He is in favor of joining the CU in Armenia with the aim of taking part in the formation of the Eurasian Economic Union (that is, Armenia can move into the planned “second floor”). Similar plans are being discussed in the leadership of Kyrgyzstan.

But what about Ukraine? ”Many readers wonder. With Ukraine lately everything is much more complicated. The Ukrainian delegation was present at the meeting, but no one had discussed any clear plans. The delegation was led by Prime Minister Mykola Azarov. Moreover, the status of the Ukrainian delegation itself was chosen “for Ukraine” for such events about six months ago ,. Azarov represented his country at the EEEC meeting as an observer country of the Customs Union (we recall that initially the use of such status in the CU was not planned).

And as soon as it became known in Kiev that Azarov flew to the Russian capital, immediately the opposition media broke out with new materials that, he says, Yanukovych again gave the go-ahead "to sell Ukraine to Russia." For Ukrainian opposition publications, the publication of such materials has become commonplace, but this time they have clearly surpassed themselves. Even before the start of the meeting of the WEC in the Ukrainian press, articles about the fact that Azarov had already signed over fifty "secret" documents with representatives of the Customs Union began to walk. Literally, I barely had time to bring the papers to Azarov ... However, immediately after the meeting, many Ukrainian media had to take their back, stating that Azarov did not sign any agreements. Some strange position: well, if you yourself said that the documents are “secret”, then who will tell the media about their signing, if such, for example, really took place ...

If with Ukraine its participation or non-participation in the formation of the Customs Union and the Eurasian Economic Union is under a dense veil of fog, then, for example, with Kazakhstan, all the fundamental agreements of Russia signed in a completely open manner. One of such agreements is connected with the use of the Baikonur cosmodrome by the Russian side. The program is scheduled for the next three years. This, by the way, is the answer to some Russian and foreign media that were quick to give out materials that Russia at a meeting in Moscow would refuse to rent Baikonur.

Now, before 2016, it is planned to carry out joint financing not only of the cosmodrome itself, after whose name the launch site for the spacecraft received its name, which has become world-famous, but also the urban infrastructure based on new principles. What will these principles be - here, nevertheless, a certain fog appears ...
The head of the Ministry of Foreign Affairs of Kazakhstan, Yerlan Idrisov, announced a number of joint Russian-Kazakh projects.

It is worth recalling that the period of the Russian lease of Baikonur was previously extended to 2050. Today, the Russian Federation spends about 5 billions of rubles annually from the budget to rent a site, as well as to maintain the complex. In addition to this amount, Russia transfers more than a billion rubles annually to the budget of the city of Baikonur. This locality has the status of both the city of republican significance of Kazakhstan, and the city of federal significance of the Russian Federation (without the status of a constituent entity of the Russian Federation) for the period of the lease). In 72, the thousandth city is roughly equally represented by Russian and Kazakhstani citizens (data from the source “Economics and Statistics of Kazakhstan” (edition 2011 of the year).

In addition to the agreements on "Baikonur" in Moscow, Putin and Nazarbayev signed agreements on military-technical cooperation and discussed the prospects for Russian oil in the PRC through the territory of Kazakhstan.

Ctrl Enter
Noticed oshЫbku Highlight text and press. Ctrl + Enter
We are
Results of the week. “I would not live my life differently if I had such an opportunity”Lukashenko gave a detailed interview to Russia Today journalists
Military Reviewin Yandex News
Military Reviewin Google News
117 comments
Information
Dear reader, to leave comments on the publication, you must sign in.