December 25 2013
43
The B-12, also known as the Mi-12, although the machine was never officially renamed (according to the NATO codification Homer), is the most heavy-lifting and heavy helicopter ever built in the world. A distinctive feature of the helicopter was the lateral arrangement of screws on the wings, having a reverse narrowing. The screws were driven with X-NUMX-x D-4WF engines. The B-25 was originally created as a super heavy transport helicopter, which was supposed to have a payload capacity of 12 tons. The helicopter was planned to be used for transporting ICBM components in the interests of parts of the Strategic Missile Forces, as well as creating positional areas in places where there were no paved roads.


Despite its outstanding performance, the entire 2 helicopter was assembled. In part, this was due to the fact that over time, lighter rocket complexes appeared in the country, and all the needs of the national economy and the military were met by mass-produced Mi-6 and Mi-10 helicopters. Both helicopters B-12 preserved. One of them is located on the territory of the Moscow Helicopter Plant, which is located on the eternal station, the second helicopter was transferred to the Air Force Museum, located in Monino.

In the early 60s of the last century, the design team of the Mil Design Bureau was tasked with developing a helicopter that would be able to transport more than 80 types of military equipment weighing up to 25 tons - tanks, self-propelled guns, air defense systems, ballistic and cruise missiles, including the UR-500, which was the "predecessor" of the Proton launch vehicle.

After a number of design options were considered (single-screw models with a different number of engines, a twin-screw longitudinal scheme both with a wing and without a wing), the Mil Design Bureau stopped at a transverse circuit with two rotor power plants, each with an 2 engine . To do this, they needed to design a rigid and lightweight design that could carry heavy enough nacelles with engines located at the ends of the consoles. The result of careful calculations of engineers has become a unique aircraft, possessing a “wing of reverse contraction”. 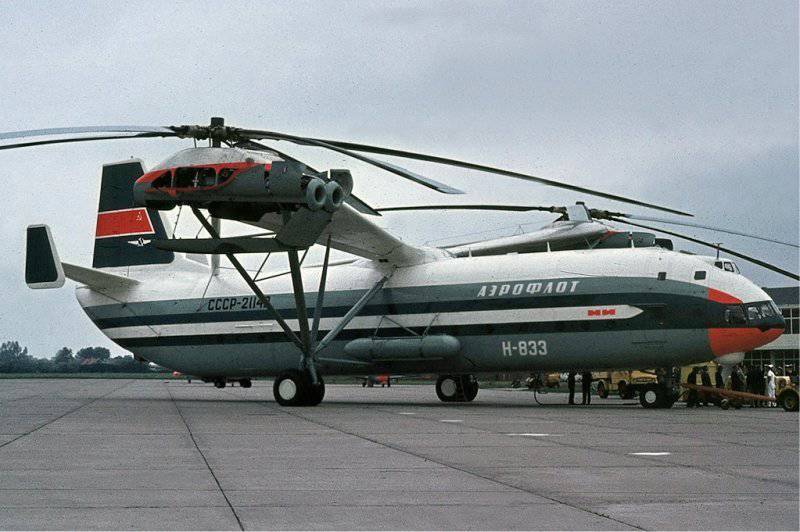 To reduce development costs, as well as to make the process of building and deploying a helicopter faster, the designers decided to create a machine by doubling the motor groups of the existing and manufactured Mi-6 (power plant, main gearbox, main rotor, control system).

The project of the giant helicopter, designated B-12, was a four-engine helicopter, made according to a twin-screw transverse scheme. At the edges of each wing wing truss, gondolas were installed, in which the D-2ВФ gas-turbine engine with 25 hp each was installed on 6500. each. Inside the wing was a transmission shaft, which synchronized the revs of both machine screws. The fuel was located in the wing and outboard fuel tanks.

The fuselage of the helicopter was made in the form of a huge semi-monocoque. In front of the fuselage was the crew cabin (2 floor). In the central part of the fuselage there was a huge cargo compartment with the following dimensions: 28,15 × 4,4 × 4,4 m. In the tail section there was a power ramp equipped with side flaps, when opening these flaps formed an aperture that was intended for loading various cargoes and entering self-propelled vehicles. To facilitate the loading process were used hoists and electric winch.

Designers tried to reduce the size of the helicopter, which led to the location of screws with overlap. This decision was the reason for the increase in the noise level in the cockpit of the helicopter, in order to reduce its level it took a lot of time, which took to choose the direction of rotation of the screws. The handling characteristics of the machine also depended on it. Also, the designers of the Mil Design Bureau paid great attention to reducing the level of vibration of the helicopter, a huge amount of work was done in this direction. 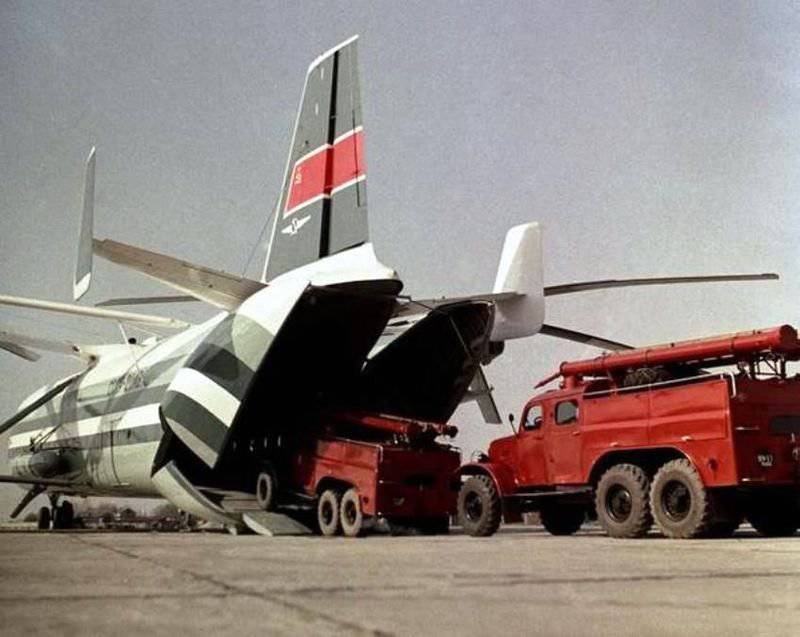 All combat and civilian equipment was to be transported in the fuselage of the helicopter, for its loading / unloading was used a hatch in the tail of the aircraft. The crew compartment of the helicopter was a two-story, but unlike the cockpit of the An-22, the cockpit, flight attendant and flight engineer were located downstairs, the navigator was located on the second floor.

A special feature of the helicopter B-12 was tail, which was implemented on the aircraft type. The deflection of the rudder increased the effectiveness of the track control, and the deflection of the elevators, produced synchronously with the change in the overall pitch of the rotors, increased the efficiency of control in the longitudinal channel.

To reduce the level of load on the command controls of the machine, the deflection of the swashplate, the change of the pitch of the rotor, the deflection of the rudders and the height of the rudders was made using hydraulic boosters. Also on the helicopter was installed AP-34B1 - a four-channel autopilot, as well as a system for automatically maintaining the specified turns of the screws. Aerial operation was greatly facilitated by the installed radar station called Lotia. 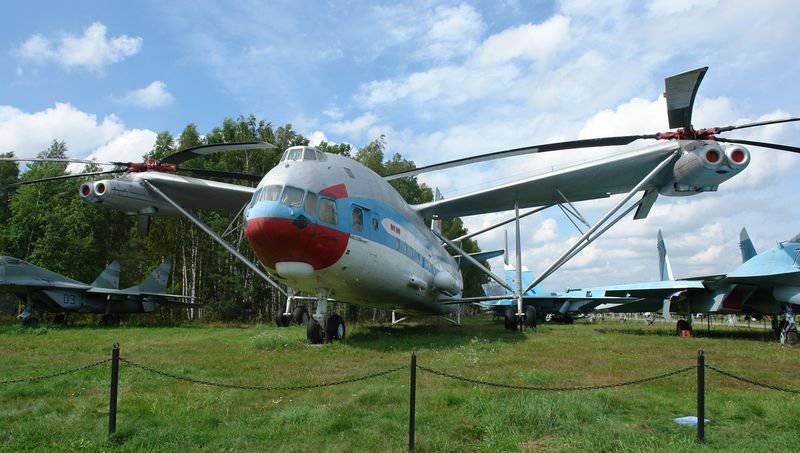 The systematic ascent of the helicopter into the air began in December 1967, the entire program of factory tests of the machine took only a month, and no complications were noted. In the autumn of next year, the first B-12 built was sent to LII at the 1 stage of joint state tests, which were completed by making a long-haul flight Moscow-Akhtubinsk-Moscow, the flight was carried out in 1970 year. In the same year, in October, the State Commission recommended starting the mass production of the heavy cargo helicopter B-12.

In May-June 1971, a new Soviet helicopter was demonstrated at Le Bourget at the 29th International Salon aviation and astronautics, here this car was recognized as a "star of the cabin." This was followed by a series of shows. The helicopter was shown in Paris, Berlin, Copenhagen. Assembled in 1972, the second instance of the helicopter stood for a year on the factory floor, waiting for the delivery of engines. This helicopter made its first flight on March 28, 1973, and the very next day the B-12 was transferred to the flight station, where it was to begin the state test program. From the first instance, the helicopter was distinguished by reinforced tail supports and more rigid controls. At the same time, the customer unexpectedly refused to take the car to the second stage of state tests, and in 1974 all work on refining the helicopter was stopped.

The heavy B-12 helicopter successfully passed all the tests, but was not put into mass production. In total, 7 world records were set on this rotary-winged machine, including the helicopter capacity record (the machine managed to lift 2250 tons of weight to 40 meters). This outstanding achievement was marked by the award of the Mil Design Bureau (the second time in stories) international prize named after Sikorsky.