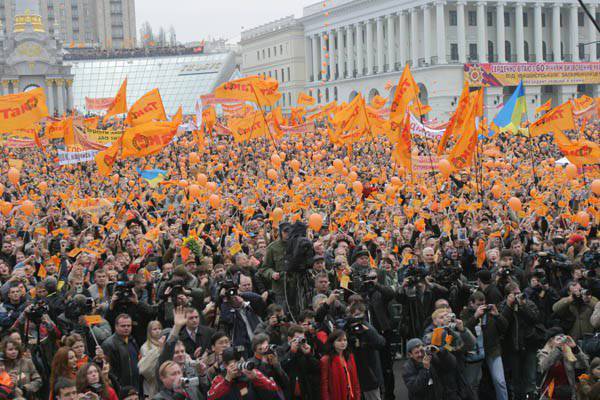 A little time has passed since the time of the so-called color revolutions. All of them ended in failure: Mikhail Saakashvili left in disgrace under the hooting of his own former comrades-in-arms, Kurmanbek Bakiyev was driven away by force, and only Viktor Yushchenko was lucky - he was even given a chance to save face, but he did not use this opportunity. It seemed that this will not happen again. And suddenly - a relapse, and even some. The intervention of the West in recent events in Ukraine was so obvious and rude that only the blind could not see it. It turns out that the civil unrest in the Ukrainian scenario is now becoming a new threat to the post-Soviet republics? What to oppose to this challenge?

The essence of "color technology"

Actually, the use of political opposition in the interests of the enemy is an ancient and proven method. Its run-in took place in Africa and the Middle East during the Cold War, it suffices to recall the weapons of the Mujahideen in Afghanistan or the UNITA and FNLA groups in Angola.

But times are changing, and instead of gross interference in the internal affairs of modern states, “soft”, almost bloodless options are being practiced - color revolutions concocted along the lines of Czechoslovakia. In fact, such revolutions are not properly called revolutions, since, apart from a sharp destabilization and a change in foreign policy, no revolutionary changes result. And the goal of color upheavals is not a revolutionary transformation of social, economic or political relations, but, as at the last meeting of the CSTO, Nikolay Bordyuzha, the secretary general of this organization, correctly noted, the disintegration of the state.

Color upheavals are one of the tools for implementing divide and conquer policy. Europe and the United States can easily dictate their terms to disunited peoples. To sow enmity between people and reap its fruits - the favorite methods of Western politicians.

What is a color coup? Nikolai Bordyuzha in his last statement gave a good description of this type of intervention. First of all, Western nongovernmental agents and the media are carrying out long preparatory work related to the promotion of liberal ideology within the country of the victim. As a rule, such work turns out to be especially effective in states with weak power structures.

The main support of the invaders - the youth and opposition parties. But the initiation of strikes and riots is not the main element of the coup. If possible, the provocateurs will try to find somewhere a bloody victim, and the sadder it turns out история her death, the greater the resonance provided. Maybe the victim will not be at all. But the tragic story must appear!

However, the last word belongs to the West. When human rights defenders convoke, and they will be repeated by a crowd warmed up by provocateurs, Washington, Brussels and the Western capitals will support the “revolutionaries” in a united front. And not in words, but in deeds, sending their emissaries to the sacrificial country along with the noble donations of international foundations “to the establishment of democracy”.

As a result, the state plunges into the abyss of crisis and finds itself on the verge of civil war; international control is needed to stabilize the situation. This is where Western political “peacemakers” appear, who eagerly crush the state for themselves and turn it into another semi-colony.

How to stop the "export of the revolution"?

What can we oppose to the technology of color upheavals? First of all, we must remember the main principle of the West - divide and conquer. It means that we are required to show cohesion not only at the national, but also at the international level.

Color coup is intervention. Accordingly, a state in turmoil must also receive outside support to resist the interventionists. Unfortunately, the organizers of the coups do not make any concessions and do not retreat from their goals, so they are ready to initiate even a civil war in the ridden republic. Thus, the ideal option, when the victim country, besides political, in case of emergency, will be provided with military assistance.

We already have an international structure capable of becoming an effective shield. This is about the CSTO.

This organization is great for arresting threats of a different nature, ranging from direct military invasion to terrorist attacks. Now the main problem for Russia is information security, since the West is brainwashing through the media and NGOs. So, attention should be paid to the introduction of information technology in the field of national security.

As practice has shown, the export of color coups is possible, so the CIS countries must act together against the coup-puppet. Saakashvili, the protagonist of the Rose Revolution, for some reason, sent strong Georgian guys to Ukraine in 2010 for some reason. Just before the presidential election. And now he is standing on Independence shoulder to shoulder with the Russian extra-systemic opposition. Does this not mean that the West has managed to form a whole International of “color revolutionaries”?

The CSTO is able to resist this pseudo-international. Through the Collective Security Treaty Organization, a dialogue can be established between the security services of the CIS countries. The exchange of experience would be very useful, since no one is immune from the intervention.

The CSTO member countries have already held a joint meeting to discuss the problem of the western invasion of the post-Soviet space in the light of recent events in Ukraine. As a result of the discussion, it was decided to develop counter-propaganda tools designed to neutralize the threat from foreign NGOs and the media. In addition, the CSTO members called on Russia to more resolutely influence the internal political life of the CIS states.

In the future, these decisions will form the basis for the creation within the framework of the Collective Security Treaty Organization of international structures capable of providing effective resistance to Western interventionists. In addition, Russia will have to revise its foreign policy doctrine, intensifying efforts in the post-Soviet space. We should not ignore the events that occur in neighboring countries, otherwise we will not be taken seriously.

We already have support from the CSTO member countries. In the case of the next sabbath, they will act as a united front against the Western invaders, standing up for the defense of the constitutional order and rendering the necessary political and humanitarian assistance to the victim country of the West. Having external support, the state covered by the revolutionary plague will not be defeated at the feet of the interventionists.

Mutual assistance should be the basis of Russian foreign policy. Russia, Kazakhstan, Belarus, Armenia, Kyrgyzstan and Tajikistan - members of the CSTO - should join Ukraine. The latter is one of the most vulnerable countries in the post-Soviet space, so that, having non-aligned status, it has no chance of survival. It turned out, lightning beats twice in one place. This should be a signal for the Ukrainian political leadership: it's time to take care that there is no third Maidan in the country. Ukraine needs stability! And the CSTO is the very structure that could provide this stability.

Ctrl Enter
Noticed oshЫbku Highlight text and press. Ctrl + Enter
We are
The personnel resource of the “color revolutions”: on whom does the USA rely in provoking chaos?Libyan military operation almost ended in failure
Military Reviewin Yandex News
Military Reviewin Google News
85 comments
Information
Dear reader, to leave comments on the publication, you must sign in.