The last battle of prisoners of the 20 block 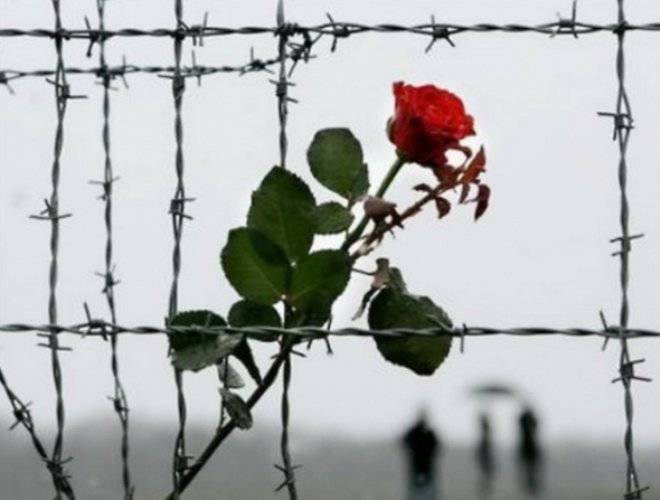 On the night of 2 on 3 February, 1945, the prisoners of the Mauthausen concentration camp, lifted machine gun fire from the bombardment. The shouting “Hurray!” That came from outside did not leave any doubts: there is a real battle in the camp. This 500 Soviet prisoners of the block number XXUMX (block of suicide bombers) attacked machine-gun towers.

Concentration camp of the third category

In August, 1938, a party of prisoners from Dachau arrived in one of the most picturesque regions of Austria, in the vicinity of the town of Mauthausen. Construction of a concentration camp, the first of the future 49 located in Ostmark (Austria), began on Austrian soil. With cynicism, the Nazis called them "labor camps." Mauthausen will be the worst of them.

According to the order of Heydrich, all concentration camps were divided into three categories according to the nature of the “contingent” they contained. The camps of the first category were sent to those arrested, “correction of which is possible”, to the camps of the second category - “correction of which is unlikely,” well, and “incorrigible” were to be imprisoned in camps of the third category. The camp of the third category was only one - Mauthausen. More terrible than Mauthausen were only extermination camps (Treblinka, Sobibor, Auschwitz, Majdanek, Belzhets, Chelmno).

In the summer of 1944, block No.20 appeared in Mauthausen to contain 1800 prisoners. It was a camp in the camp, separated from the general territory by a fence with a height of 2,5 meters, on top of which there was a wire under current. Along the perimeter were three towers with machine guns.

Very soon, the 20 block received the dark glory of the "death block". New batches of prisoners were sent there regularly, and from there, only corpses were taken to the crematorium. Prisoners of the 20 block received 1 / 4 all-gaiter ration. Spoons, plates they were not supposed to. The unit was never heated. There were neither frames nor glasses in the window openings. The block was not even nar. In winter, before driving the prisoners into the block, the SS men poured water from the floor of the block with a hose. People went to the water and just did not wake up.

"Suicide bombers" had terrible "privilege" - they are not driven to work. Instead, they spent the whole day doing “exercise” - they ran around the block without a stop or crawled. On prisoners of the 20 block, the SS practiced the skills of killing a person with their bare hands and improvised means. There was even a kind of "normal death" - at least 10 people a day. The “distribution list” was constantly exceeded in 2-3 times. During the existence of the block, 3,5-4 thousand people were destroyed in it (some sources contain data on 6 thousand). By the end of January, about 20 people survived in block 570.

Prisoners of the block №20

With the exception of the 5-6 Yugoslavs and several Poles (participants in the Warsaw uprising), all the prisoners of the "death block" were Soviet prisoners of war officers sent here from other camps. Open disobedience of the camp administration, numerous attempts to escape, Bolshevik propaganda among the prisoners ... In the 20 block of Mauthausen, prisoners were sent, even in concentration camps, which were a threat to III Reich because of their military education, volitional qualities and organizational abilities. All of them were captured as wounded or unconscious, and during their time in captivity they were recognized as "incorrigible."

In the accompanying documents of each of them was the letter "K", which meant that the prisoner was subject to liquidation as soon as possible. Therefore, those who arrived in the 20 block were not even branded, since the life span of the prisoner in the 20 block did not exceed several weeks. In January, 1945, the prisoners of the 20 block, knowing that the Red Army had already entered Poland and Hungary, and the British and Americans crossed the German border, began to prepare for escape.

Reference data on some prisoners of the 20 block

Lieutenant Colonel Alexander Isupov - attack pilot, commander of the air division. Shot down, injured, captured in 1944 year. In the camp, where he was kept, arrived Vlasov emissary. Before the prisoners of war driven to the parade ground, the collaborationist predicted a quick victory for Germany and urged them to join the ranks of the ROA. After an inspirational speech traitor asked for the floor and took the podium Isupov. A career officer of the Red Army Air Force, a graduate of the Air Force Academy. Zhukovsky, he began one by one to smash all the theses of the previous speaker and to prove that the defeat of Germany and the victory of the USSR were predetermined.

Ivan Bityukov arrived in Mauthausen in early January. When the camp barber (a Czech prisoner) cut off a strip in the middle of his head (in the case of escape, she betrayed a prisoner), the SS men left the room. The hairdresser took Bityukov’s ear and hurriedly whispered: “You will be sent to the 20 block. Tell your friends: they will all be shot soon. Yours asked for a plan of the camp - let them search at the bottom of the tank in which they bring the gruel ”.

Only for the third time, the captain of Mordovtsev, rummaging around the bottom of the cistern, found a tiny ball pasted and handed it to his comrades a few minutes before his death: something suspected SS men beat him in front of his comrades.

With stones in hands - on machine guns

On the appointed night around midnight, the "bomber" began to get out of their hiding places "weapon"- cobblestones, pieces of coal and fragments of a broken washstand. The main "weapon" were two fire extinguishers. 4 assault groups were formed: three were supposed to attack machine-gun towers, one if necessary - to repel an external attack from the side of the camp.

About one o'clock in the morning, the suicide bombers of the 20 block began jumping out of the window apertures and rushed to the towers, shouting “Hurray!” Machine guns opened fire. Foamy streams of fire extinguishers hit the faces of the machine-gunners, a hail of stones flew. Even pieces of ersatz-soap and wooden blocks with legs flew. One machine gun choked, and the members of the assault group immediately climbed onto the tower. Having seized a machine gun, they opened fire on neighboring towers. The prisoners, with the help of wooden boards, shortened the wire, threw blankets on it and began to move over the wall. A siren howled, machine guns chirped, SS men were building in the courtyard, preparing to begin the pursuit.

The SS men who broke into the 20 block found about 70 people in it. These were the most emaciated prisoners who simply did not have the strength to escape. All the prisoners were naked - they gave their clothes to their comrades.

Out of almost 500 people, more than 400 managed to break through the outer fence and ended up outside the camp. As agreed, the fugitives broke up into several groups and rushed in different directions to make it difficult to capture. The largest group ran to the forest. When the SS men began to overtake it, several dozen people separated and rushed towards the persecutors to take their last battle and hold their enemies for at least a few minutes.

One of the groups stumbled upon a German anti-aircraft battery. After removing the sentry and bursting into the dugouts, the fugitives, with their bare hands, stifled a cannon's servant, seized a weapon and a truck. The group was overtaken and accepted their last fight.

About a hundred prisoners escaped into liberty died in the first hours. Bogging in the deep snow, in the cold (the thermometer that night showed minus 8 degrees), exhausted, many simply physically could not go more than 10-15 km. But more than 300 were able to escape persecution and hid in the vicinity.

"Hunting hares" in the district of Mühlviertel

In search of fugitives, besides guarding the camp, parts of the Wehrmacht, SS units and the local field gendarmerie were deployed in the vicinity. Caught fugitives were taken to Mauthausen and shot at the crematorium wall, where they immediately burned the bodies. But most often they were shot at the place of capture, and corpses were already brought to the camp.

In the German documents, the measures to search for the fugitives were called “Mülviertel Hare Hunt”. Local people were involved in the search. At the gatherings, the burgomasters declared that those who had escaped were dangerous criminals, representing a threat to the population. Detected fugitives were instructed to kill on the spot, for each killed person a cash bonus was issued.

Planning an escape, the organizers counted on the support of the local population (the Austrians are not Germans). In vain. The fugitives were denied food, doors were closed in front of them, they were given out, they were killed.

Volkssturm fighters, members of the Hitler Youth, members of the local NSDAP unit and non-partisan volunteers excitedly searched around the “hares” and killed them on the spot. They killed by improvised means - axes, pitchforks, because they took care of the cartridges. The bodies were taken to the village of Ried in der Riedmarkt, and dumped in the courtyard of a local school. Here the SS men were counting, crossing out the sticks drawn on the wall. A few days later, the SS men declared that “the account had settled”.

SS lied. Survived one person from the group that destroyed the German anti-aircraft battery. Ninety-two days, risking their lives, the Austrian peasant woman Langtaler, whose sons fought as part of the Wehrmacht at that time, hid two runaways in her farm. The 19 who escaped were never caught. 11 names are known. 8 of them survived and returned to the Soviet Union.

According to the testimony of the survivors, a few minutes before the uprising, one of the organizers (General? Colonel?) Said: “Many of us will die today. Most of us will die. But let's swear that those who are lucky enough to stay alive and return to their homeland will tell the truth about our sufferings and our struggle so that this will never happen again! ”And everyone swore.

In 1994, the Austrian director and producer Andreas Gruber made a film about the events in the Mühlviertel district (“Hasenjagd: Vor lauter Feigheit gibt es kein Erbarmen”). The film became the highest grossing in Austria in 1994-1995.

There is no such film in Russia. WHY?! 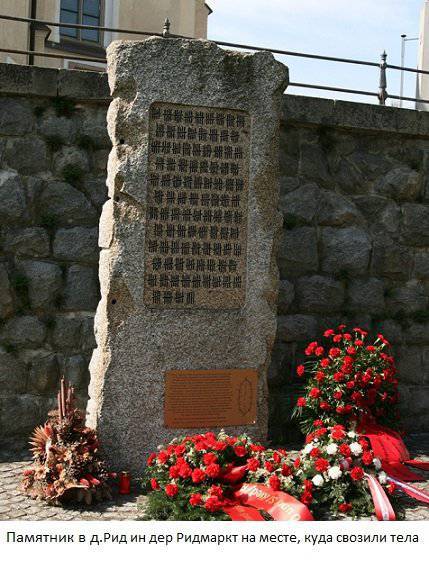