December 25 2013
17
At the end of November, a new round of the territorial dispute between China and Japan about the ownership of the Senkaku Islands (Diaoyudao) began. Several small land areas in the East China Sea have been the subject of controversy since the early nineties. Official Beijing considers the Diaoyu Islands to be their ancestral territories, while Tokyo appeals to the results of the 19th century expeditions and the agreement with the United States (according to the latter, Japan received this archipelago and Okinawa island). China and Japan regularly exchange unfriendly statements, on the basis of which there are often speculations about the possible start of a war. For two decades of the dispute, there has not been a single armed conflict, but the possibility of such a development cannot be completely ruled out.


The location of the Senkaku Islands (Diaoyu) suggests that the first naval forces of the two states can join the battle. In the case of China, this particular branch of the military is the most dynamically developing. In recent years, Chinese shipbuilders have developed, built and transferred several dozen ships and submarines of various types to the naval forces. In the future, China will continue to re-equip the Navy, which will increase their combat capability. Since a hypothetical conflict can only begin in the future, the Navy of the People’s Liberation Army of China will have time to receive several new ships by this time. 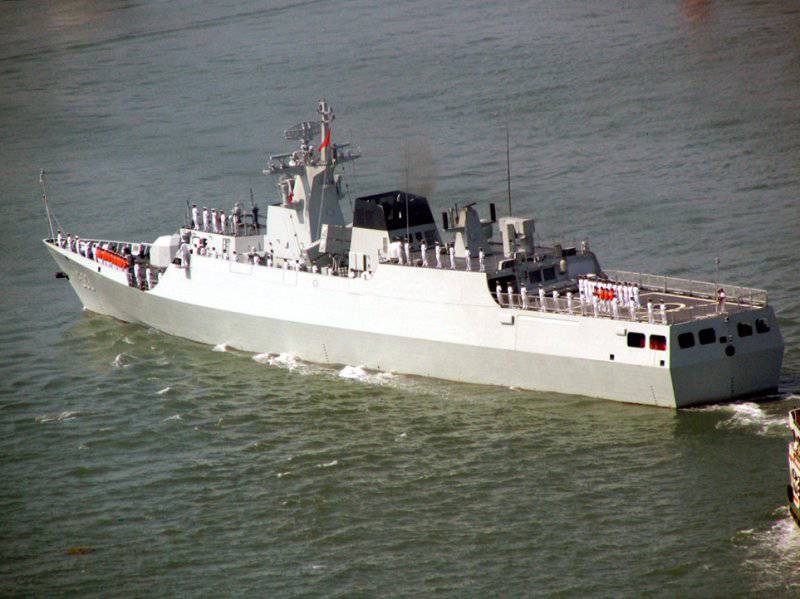 It is necessary to recognize that one of the reasons for such rapid construction of Type 056 corvettes is their small size and comparative simplicity of design. The total displacement of these corvettes does not exceed 1440 tons. The length of the hull is 89 meters, the maximum width is 11,6 m. The corvettes "Type 056" are equipped with two diesel engines of an unnamed brand. Some assumptions about their power can be made on the basis of information about the ship’s propulsion characteristics. The maximum speed of the new corvettes is declared at the level of 28 nodes. Cruising speed at cruising speed 18 knots reaches 3500 nautical miles. Corvette crew consists of 60 people.

Type 056 corvettes carry powerful enough for their size weapons. To fight the ships of the enemy, they are equipped with two launchers, which are placed on two anti-ship missiles YJ-83. it weapon allows the ship to destroy targets at a distance of 300 kilometers. As the anti-submarine armament of the corvette can use two built-in torpedo tubes. The protection of a ship or a naval compound against air attacks is carried out using rocket and artillery systems. At distances up to 9 kilometers protection of the ship rests on the anti-aircraft missile system FL-3000N. At close range, Type 056 corvettes can attack an air target using X / NUMX-mm H / PJ-30 anti-aircraft guns. Finally, the H / PJ-17 artillery mount with a 26 mm caliber gun, which is a revised version of the AK / 76 Soviet / Russian system, can be used for firing at air, surface or coastal targets. If necessary, the corvette "Type 176" can carry and anti-submarine helicopter and ensure its combat work. 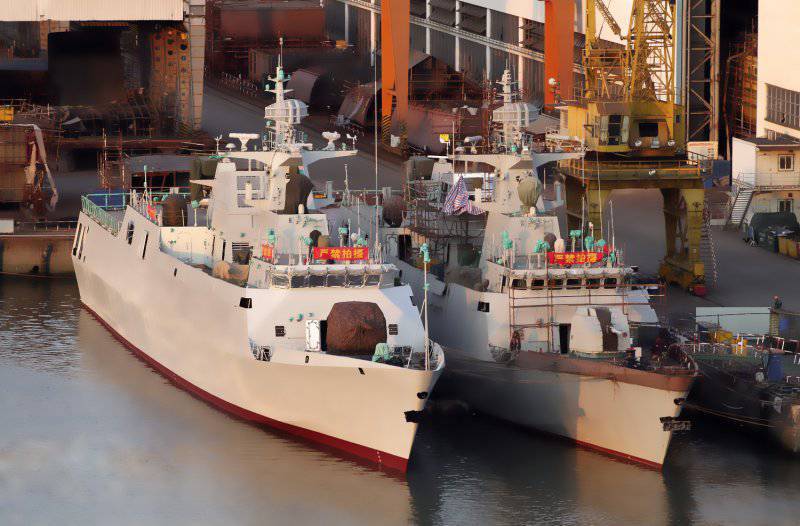 The main task of Type 056 corvettes is to patrol territorial waters and exclusive economic zones at a relatively small distance from the coast. Thus, in the event of a further aggravation of relations with Japan, two corvettes of a new project, serving as part of Fleet East Sea. In the foreseeable future, the number of such ships in the composition of this association will increase. Despite its small size and limited capabilities, Type 056 corvettes, if necessary, can represent the interests of China in some areas of the East Asian region.

In 2014, the Chinese shipbuilding industry intends to hand over to the customer in the face of the PLA Navy the lead destroyer of the Type 052D project. This project is a further development of the 052 Type destroyer family, which already has several modifications. According to reports, within a few years the Chinese naval forces will receive at least ten such ships.

The 052D project ships will have a full displacement of 7500 tons with a total length of 155 meters, a width of 18 m and a draft of 6,5 m. It consists of two QC-30 gas turbine engines with 280 power, thousand hp. and two MTU 37,5V 12TB1163 diesels capable of providing total power over 83 thousand hp The crew of the Type 13D destroyers, like the ships of previous modifications of this project, will consist of 052 people. 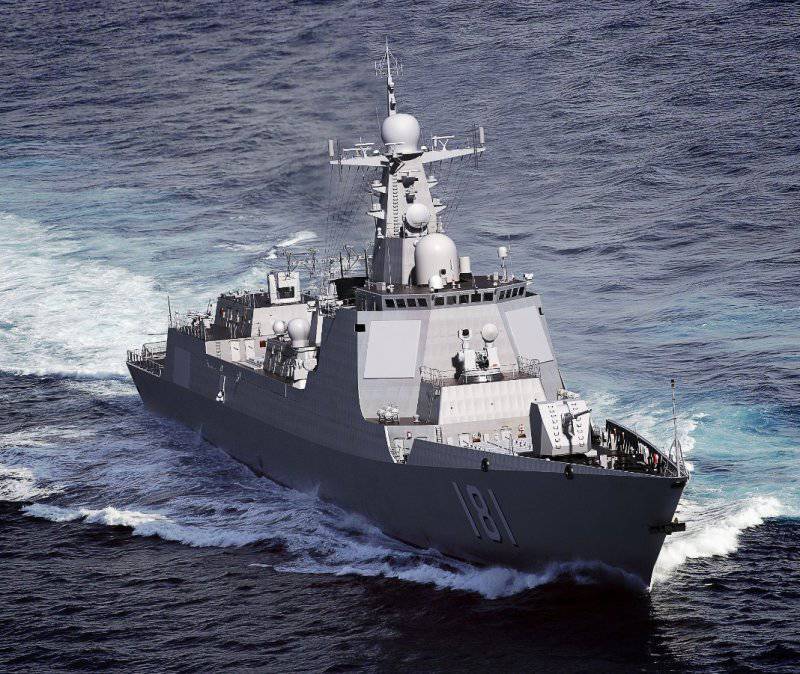 When developing projects of the "Type 052" family, Chinese designers took into account foreign experience. For this reason, ships are equipped with two vertical launchers (TLU), each of which has 32 missile cells. Depending on the tasks performed, the ship can be armed with various numbers of anti-aircraft, anti-ship or anti-submarine missiles. So far, only the possibility of using the HQ-9 anti-aircraft missiles is known, while official information about usable anti-ship or anti-submarine ammunition is not available. It cannot be excluded that the Chinese defense industry is already working on this issue and the lead destroyer Type 052D will receive an expanded nomenclature of armaments.

The use of an updated vertical launcher with more features has caused the project "Type 052D" to get the original nickname: "Arleigh Burke in Chinese." Indeed, the presence of TLUs with the possibility of using various types of missiles makes the Type 052D destroyers look like American ships of the Arleigh Burke project. According to reports, this similarity should increase. The fact is that, in addition to TLU, new Chinese ships will receive a Type 517M radar with an active phased antenna array and an updated combat information and control system. Equipping Chinese ships with such equipment will greatly enhance their combat potential and make them even more like the destroyers of the American naval forces.

When using HQ-9 missiles, the Type 052D destroyer is capable of destroying targets at a distance of up to 200 kilometers. At short distances, air defense should be carried out using the FL-3000N complex. Destruction of air targets at a distance of several kilometers can be done using two anti-aircraft guns H / PJ-12. To attack enemy submarines, ships are equipped with two built-in torpedo tubes. Exact information about the anti-ship armament of destroyers "Type 052D" is missing. According to various sources, these ships will be able to use the weapons of the existing types, and also the creation of a new anti-ship missile is not excluded. 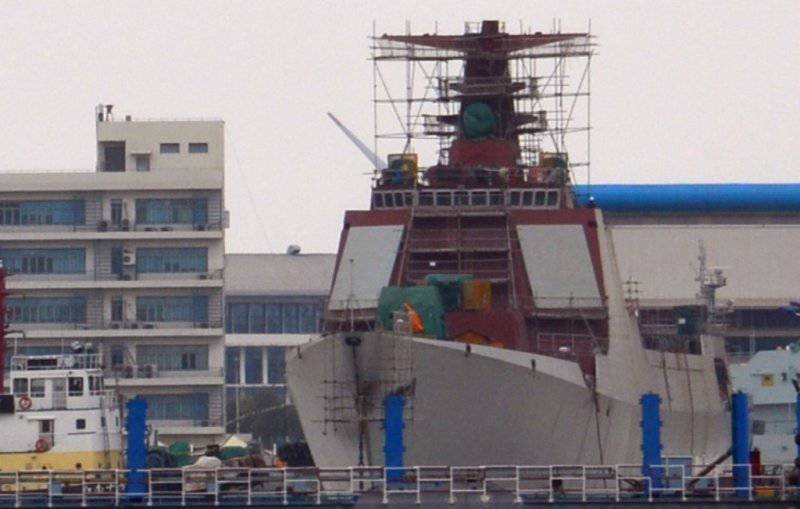 Destroyers Type 052D able to work away from the coast, performing various tasks related to the search and destruction of various targets. Thus, their combat capabilities can be useful in the event of the beginning of an armed confrontation over the possession of the disputed islands. The lack of accurate information about the anti-ship armament of new Chinese destroyers does not allow for a full assessment of their potential, but we should not forget that the PLA Navy has several dozen 052 Type ships of previous modifications.

As we see, China continues to develop its naval forces and builds new ships with quite high characteristics. You also need to take into account the large number of ships and submarines of various classes and types already serving in the Chinese military fleet. Even on the basis of the available information, it is possible to make some assumptions about the course of a possible war for the Senkaku Islands. China has a fairly powerful navy, the capabilities of which allow you to fight with ships of almost any country in East Asia. It is necessary to take into account that not only the PLA Navy will participate in a hypothetical conflict, but also air forces that are also actively developing. Thus, an armed clash near the disputed territories could result in serious losses in personnel and equipment for both China and its opponents. Naturally, only the open naval battle can show the real capabilities of the naval forces of China and Japan, but it is better to limit ourselves to assumptions and not bring the matter to war.