Terms of the PAK DA project implementation are named. 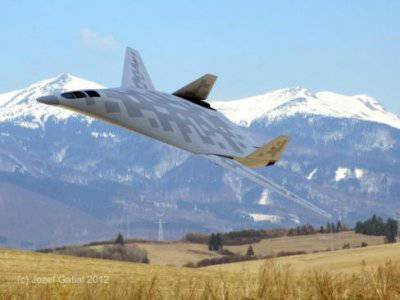 December 23 pilots aviation celebrated their professional holiday. On the same day, the commander of long-range aviation, Lieutenant General A. Zhikharev announced some plans of the Ministry of Defense regarding the further development of this type of air force. Of greatest interest are his words regarding the PAK DA project (Advanced Long-Range Aviation Complex). The aircraft created as part of this project should replace several types of equipment currently in use.


According to Zhikharev, the work on the PAK DA program has been going on for several years. During this time numerous research works were carried out. To date, the organizations involved in the program are ready to begin development work. The beginning of this stage is scheduled for next year. The development of a technical project, according to current plans, should take several years, after which the construction of a prototype will begin. The first prototype of the PAK DA bomber should take to the air in 2019 year. Finally, the first production aircraft of the new model will go to the air force in 2025 year. Thus, the PAK DA program in the coming months will enter the stage of creating a project on which new aircraft will be built.

Unfortunately, the commander of long-range aviation did not disclose any specific information about the requirements for a promising bomber or its technical appearance. Allegedly, the PAK DA aircraft will have great combat capabilities compared to existing types of bombers. It will be “a plane of a different class, with other weapons,” RIA quotes Zhikharev. News.

While the design organizations will be busy creating the project of a promising strategic bomber, the Air Force intends to modernize the existing fleet of vehicles. Aircraft Tu-160, Tu-22М3 and Tu-95MS in the foreseeable future must undergo an upgrade, divided into two stages. In the course of these works, the equipment will be repaired and equipped with new radio-electronic equipment. Now the industry and the Ministry of Defense are conducting the first stage of such modernization. The second will start later. Repair and upgrade of aircraft will significantly increase their service life. For example, the Tu-95MS bombers, after all updates, will be able to remain in service until the 2040 year.

In addition to combat aircraft, it is planned to upgrade auxiliary ones. According to Lieutenant General A. Zhikharev, in the near future, the Il-78 tankers will be upgraded. Later, in 2018, new aircraft of this class are expected to emerge, which will gradually replace the existing technology. It is expected that the new tanker will be able to work with both strategic and tactical aviation.

About the beginning of work on a promising strategic bomber it became known several years ago, but so far all the information about it concerns only the approximate dates for the completion of one or another stage. The situation changed a little in August of this year, when information appeared about some of the technical features of the project. It became known that the PAK DA aircraft will be subsonic, and it will be possible to place more weapons in its cargo compartments than the existing Tu-160 bomber. This information allows us to make some assumptions, but their validity will be confirmed or refuted only by official information. Subsonic flight speed and a large combat load can talk about the creation of an airplane scheme “flying wing”. As far as we know, in recent years, domestic scientists have been actively engaged in this topic, and some of the research results can be used in the PAK DA program.

To fully replace existing types of aircraft, a promising bomber will need to have high flight data. Flight range must exceed 11-12 thousand kilometers without refueling in flight. Information about the creation of a subsonic bomber allows you to roughly estimate the performance of cruising and maximum speed.

The nomenclature of the PAK DA bomber will surely include the X-55 cruise missile and its modifications used by the aircraft in service. In addition, the new aircraft should be the carrier of the promising X-101 cruise missiles. To perform the tactical tasks of the Tu-22М3 aircraft, the PAK DA bomber must be able to use guided and free-fall bombs of various types and calibers.

According to press reports, the overall appearance of the PAK DA aircraft was formed about a year and a half ago. Design work on the program to develop a new long-range bomber will begin only next year. Thus, over the coming years, when information about the new aircraft will be published, it will be possible to determine how accurate the assumptions about the appearance of the promising bomber were.