The US is preparing a new generation of laser weapons 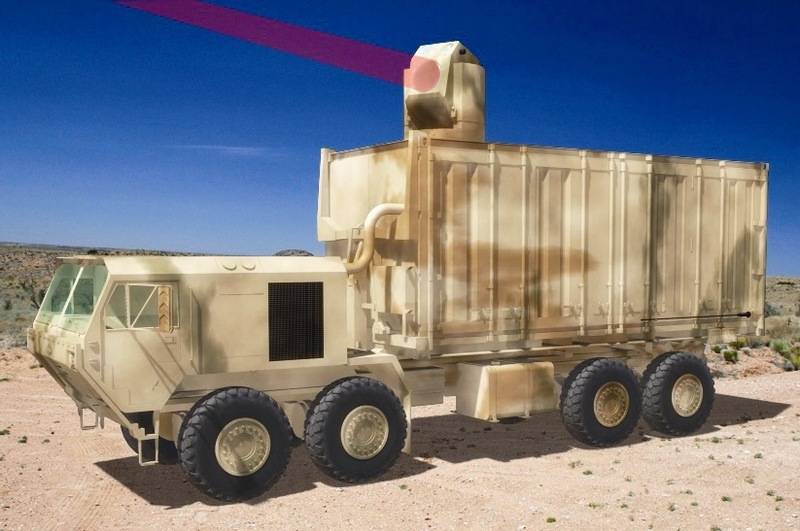 In the near future, it may be created a new laser weapon. This conclusion was made by experts of the American Lexington Institute.

The Armed Forces research and development system over the years 30 has been trying to create a direct energy weapon DEW (Direct Energy Weapon). As part of the Strategic Defense Initiative SDI (Strategic Defense Initiative) it was planned to create a wide range of such weapons - from a ground-based laser operating on the principle of uncoupled electrons to cosmic laser weapons with X-rays, the source of energy for which would be a nuclear reaction. It is for this reason that the program was given the slang name "Star Wars" (Star Wars).

Despite the fact that the weapon described above was never created, the scientific community continued its development. The Ground Forces (SV) of the USA and the Israel Defense Forces began the joint development of a tactical high-energy laser THEL (Tactical High Energy Laser) at the end of the 1990-s. By the beginning of the 2000's. an experimental version of the THEL shot down the 33 multi-launch rocket launcher (MLRS) of the BM-13 and other types of rockets. During the tests there were cases of simultaneous destruction of several ammunition. At the same time, the US Air Force was working on the creation of an aircraft-based laser. In 2010, it was demonstrated that such a system could shoot down ballistic missiles in flight.

However, both programs, in the end, were minimized. The reason for this was the imperfection of a number of technologies, both THEL and aircraft-based lasers, the structure of both lasers based on the use of a large number of toxic chemicals necessary to ensure the performance of weapons, the high cost of developing an operating system. However, during the development of the THEL and the airborne laser, it was discovered that they can detect and destroy fast-moving targets with a short flight time.

It is likely that in the near future a new generation of directional energy transfer weapons will be developed.

In 2013, the US SV tested a mobile high-energy laser demonstrator HEL MD (High Energy Laser Mobile Demonstrator) at the White Sands missile (New Mexico). The demonstrator represented a low-power laser (10-15 kW) mounted on a car chassis. However, it was determined that he could shoot down several types of missiles, mortar shells and artillery shells in the middle section of the flight path. HEL MD also showed that it can fight with optoelectronic sensors mounted on unmanned aerial vehicles (UAV).

The United States Navy (Navy) is currently working on a Maritime Laser Demonstrator maritime demonstrator (MLD). In April, 2011 was conducted marine tests of this system. In their course, the MLD successfully completed the tasks assigned to sea-based laser weapons. He discovered the target and illuminated it with a laser beam. Power supply technologies and energy consumption control, temperature control, integration with various warship systems were developed. MLD was able to track and destroy small surface targets. Also, the demonstrator showed the possibility of passive tracking and identification of relatively small objects like a UAV or a small-sized boat.

Based on the achievements of the demonstrations described above, scientists continue to develop more powerful prototypes. Next year, the US Navy is expected to deploy a more efficient prototype of a sea-based laser on board the Pouns ship (USS Ponce) in the Persian Gulf. The laser will be fully integrated with the energy and combat systems of the ship just as if it were conventional weapons. SV plans to deploy more powerful prototypes until a power level acceptable to the combat system is reached.

In contrast to the previous programs, tens of millions of dollars have been spent on new developments, in particular, because they are based on the work already done by the US Air Force and other types of troops. Moreover, the new programs provide for the gradual development of a sample, while earlier from the very beginning the task was to create a ready-to-use ONPE.

DPRP has a serious potential that can transform military equipment. For example, a laser equipped with an appropriate power plant, has a store with a virtually unlimited volume. At the same time the cost of one shot is very low. This will nullify the effectiveness of attempts by opponents of the United States to suddenly use inexpensive offensive weapons or force the US military to face the problem of excessive costs when deploying weapons. In addition, the use of lasers will allow the US military to dominate the battlefield in the field of optoelectronic equipment.

The laser system can be converted into a sensor, a weapon or even a non-lethal weapon (OND) when operating in low power mode. Likely adversaries who develop intelligence equipment with advanced sensors should seriously take the threat of laser weapons into account.

Currently, programs for creating lasers can lead to certain results, since their cost is relatively small, they are effectively managed, based on proven technologies, and their goal is to create weapons with a wide range of applications. In the case of the placement of DPRP on land, at sea and, possibly, in the air, the US armed forces will receive a serious superiority in the future over potential adversaries, ITAR-TASS reports.