The Russian Defense Ministry celebrates the 95 anniversary of the birth of an outstanding commander, Marshal of Artillery Yefim Boychuk 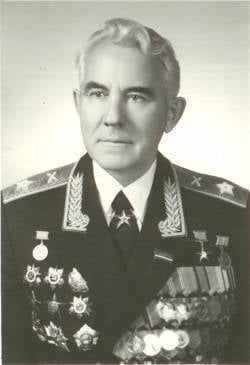 24 December this year In Moscow, solemn events will be held with the participation of personnel and veterans of the 12-th Main Directorate of the Ministry of Defense of the Russian Federation, dedicated to the 95 anniversary of the birth of the Soviet military leader, Hero of Socialist Labor, Marshal of Artillery Yefim Vasilyevich Boychuk.


Efim Boychuk was born in 1918 in the village of Yukhimivtsi, Chernoostrovsky district, Khmelnitsky region, in a peasant family. In 1933, he entered the automotive technical school. After graduating from the fourth year at 1937, he was sent to study at the Kiev Artillery School. A year later, the Kiev School was disbanded, and to continue his studies, Yefim Boichuk was transferred to the Tomsk Artillery School, which he successfully graduated from at 1939 in

Lieutenant Efim Boychuk began service in the army in the Far East as commander of an artillery platoon of a light artillery regiment, and two years later he was appointed commander of a battery.

In September, the 1941 of Yefim Boichuk, as part of his regiment, was transferred to the front. Passed the whole war. He was the commander of the battery, artillery battalion, in various staff posts, but all the time - on the front line. He was wounded several times, in one of the battles in 1942, he was surrounded by the enemy and caused artillery fire on himself, miraculously remained alive.

During the war years he went from lieutenant to major. Awarded four battle orders. The war ended in the post of chief of staff of an artillery brigade. In August, 1945 was transferred to the Far East, was appointed Chief of Staff of the Army Cannon Brigade and participated in the Soviet-Japanese war as part of the forces of the Trans-Baikal Front.

Front-line experience, excellent military training and personal organization of E.V. Boychuk successfully combined with his vigor and assertiveness. In 1948, he entered the Dzerzhinsky Artillery Academy, which he graduated with honors from 1953, after which he was appointed commander of an artillery regiment.

The period of post-war service E.V. Boichuk coincided with the deployment in the USSR of large-scale work on the creation of nuclear weapons and means of delivery.
In October 1954, Col. E.V. Boychuk has the highest confidence - they are appointed commander of the engineering brigade of the Reserve of the Supreme Commander - one of the first in the USSR formations equipped with tactical missile systems.

A year later, E.V. Boichuk heads the newly formed Kamyshin Artillery Technical School, which trains engineers and technicians for the operation of missile weapons. Two years later he was entrusted with the formation of a compound of intercontinental rockets in the Urals.

In 1962, the recently formed Strategic Missile Forces (RVSN) dealt with the difficult and responsible task of preventing the American invasion of Cuba. It was the only post-war history countries of operation (called "Anadyr"), associated with the transportation and deployment on another continent of a group of troops with nuclear weapons. All types of the USSR Armed Forces participated in it.

Efim Boychuk took a personal part in organizing this operation. In the Main Operations Directorate of the General Staff of the Armed Forces of the USSR, all operational issues were resolved, interaction of bodies, services and staffs of the branches of the Armed Forces, Ministry of the Sea was organized Fleet.

In 1963-1968 Efim Boichuk heads the Missile Forces Directorate of the Main Operational Directorate of the General Staff of the Armed Forces of the USSR, making a large personal contribution to the creation of new, more advanced missile systems, the development of the organization of units and formations of the Strategic Missile Forces, their formation and maintenance of combat readiness.

In 1968, Lieutenant-General Ye.V. Boychuk is appointed deputy, and a year later - the first deputy chief of the Main Operational Directorate of the General Staff of the Armed Forces of the USSR.

The talent of Efim Boichuk as a prominent commander was fully revealed in 1974 – 1985, when he headed 12, the Main Directorate of the USSR Ministry of Defense, engaged in the implementation of military nuclear technology policy, including the nuclear arsenal of the Armed Forces of the USSR.

Possessing a broad strategic outlook developed over the years at the General Staff, as well as based on the results of comprehensive scientific research, Colonel-General Efim Boichuk came to the conclusion that it was necessary to take radical measures to increase the security of a state’s nuclear ammunition during the period of danger.

The tactics developed by Ye.V. Boychuk for the actions of the central bases for the storage of nuclear weapons ensured the required combat readiness of the nuclear forces, and in combination with the organizational and technical measures to significantly increase the survivability of the nuclear ammunition.

The basic principles of this tactic, somewhat refined and adjusted to meet modern requirements, have so far retained their relevance and are the basis for the organization of actions by nuclear support units.

With the direct participation of E.V. Boychuk all types of Armed Forces were equipped with modern nuclear weapons that meet the requirements of reliability, survivability, efficiency. This task was subordinated to the activities of scientific institutions and polygons of the Main Department.

In 70-x - the first half of the 80-ies, the maximum number of nuclear tests were conducted at the USSR nuclear test sites (24 – 25 tests per year). Mastering the method of conducting group nuclear explosions has made it possible not only to accomplish the assigned tasks qualitatively, but also to drastically reduce the costs of testing per one charge.

Ctrl Enter
Noticed oshЫbku Highlight text and press. Ctrl + Enter
We are
In connection with the emergency, the 1 unit of Khmelnitsky NPP is disconnectedRiot day
Military Reviewin Yandex News
Military Reviewin Google News
3 comments
Information
Dear reader, to leave comments on the publication, you must sign in.