Who and what made Patriotism of General Vlasov? Part two

December 25 2013
0
And these testimonies suggest that General Vlasov (which was to be expected) became an ardent anti-Stalinist only after he was on the other side of the front, leaving the remnants of the perishing army in Meat Bor. Prior to his surrender to the German patrol in the village of Tukhovezhi, Andrei Andreyevich Vlasov was distinguished by high piety for Bolshevism and, especially, for Stalin’s personality. By the way, piety was explainable, because Vlasov is a unique person who managed to make a dizzying military career not without the favor of the highest Soviet officials (including the military). Vlasov gives his piety to Stalin’s person after a personal meeting with him in very similar letters addressed to his wife and mistress.


From a letter to wife Anna Vlasova:
You would not believe, dear Anya! What a joy in my life! I talked with our biggest master. I had this honor for the first time in my life. You can’t imagine how worried I was and how I left him inspired. Apparently, you would not even believe that such a great person has enough time even for our personal affairs. So believe, he asked me where my wife is and how she lives.

A letter to Agnesse Podmazenko's mistress (a military doctor, accompanied by whom Vlasov left the encirclement near Kiev; the so-called front-line wife Vlasova):
Dear and sweet Alichka! I was summoned to his biggest and most important master. Imagine, he talked with me for an hour and a half. You can imagine for yourself what happiness has fallen to me ... And now I don’t know how I can justify the trust that he has in me ... 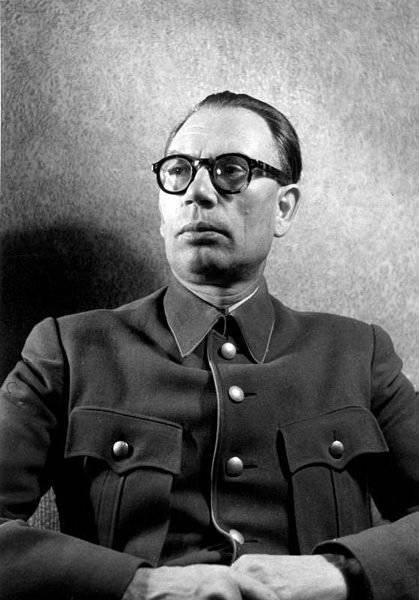 Apparently, Andrei Andreich did not invent alternative texts, but sent his wife and mistress, let's say, the “rewrite” of the same text. At the same time, in one and in another letter, there is a complete and limitless, if not servility, before whom, it turns out, he is going to fight, then something close to servility is. How do these texts fit in with the words of Vlasov, spoken in Prague, about the Stalinist terror and the Bolsheviks-exploiters? .. They only fit if there are the following, if you can say so, assumptions: Vlasov is a typical fitter.

Of course, there are people who claim that the declassified archives containing the materials of the Vlasov case are filled with Soviet propaganda "documents", and that the letters could either be "fake NKVD" or get out of the hands of Vlasov under pressure from the NKVD found himself in a Moscow detention center in 1945. But even if we assume that this is possible, then why then the film, recorded under the explicit supervision of the Nazis in Prague, should be regarded as more weighty evidence of the anti-Stalinist way of thinking of Vlasov? That is, the theory concocted by the Nazis and sounded by Vlasov that he, General Vlasov, is a fighter against Bolshevism, we must trust, but the letters to two of his many wives and concubines are not. The logic in this formulation of the question is missing.

The second idea (tracing paper from the first):
Vlasov began to cooperate with the Germans in order to use their strength, defeat the Red Army, and destroy Stalin and Bolshevism in Russia. And then the general, in the opinion of the authors of the version of genuine heroism and patriotism of Vlasov, was allegedly about to build an independent Russia "quietly" from the Germans.

This version crumbles into dust, if only because, taking the new oath, Vlasov knew about Hitler’s plan about the role of Russia and the role of its population’s remnants for the Reich in the event of the Nazi victory (at that time many did not doubt the victory of the Reich). What kind of independence of Russia "quietly" could Vlasov then think if the country's population itself had to turn, according to Hitler's plan, into a wordless and lacking initiative herd that can be used for slave or semi-slave labor? Moreover, the fertile Russian lands were supposed to be inhabited by the “true Aryans”, on which those whom they deign to leave alive will work. The plans of the "Fuhrer" did not include not only independent Russia, but the presence of Russia as such.

Here is something for an example from the voiced and documented thoughts of the highest ranks of the Third Reich:

It doesn’t matter that millions of people will die of hunger if we take from this country what we need for ourselves.

It will be necessary to organize the transfer to the central regions of Russia of a significant part of the urban population of Latvia and the lower groups of the population of Lithuania. Then steps will be taken to settle these countries by the peoples of the Germanic race. Germans from the Volga region, cleared of unwanted elements, can give a large contingent. It should further be borne in mind by the Danes, the Norwegians, the Dutch, and even - after the victorious outcome of the war - the British. For one or two generations, this new area of ​​colonization could be annexed to the Reich.

And "personally" from Hitler:
Never in the future should military education be allowed west of the Urals, even if we had to fight 100 for years to prevent this. All my successors should know that the position of Germany is firm only in so far as there is no other military power to the west of the Urals. Our iron principle from now on will forever be that no one other than the Germans should wear weapon.

Or for the General Vlasov, the Germans were going to make an exception?

It’s so naive to think so, given how high-ranking Reichsmen themselves spoke about Vlasov.

Himmler about Vlasov (1943):
We told this general something like this: that there is no way back for you, it is clear to you. But you are a significant person, and we guarantee you that when the war ends, you will receive the retirement of the lieutenant general, and in the near future - here you have schnapps, cigarettes and women. Here's how cheap you can buy such a general! Very cheap.

Himmler understood perfectly well that the POA is a “beautiful” toy for both Vlasov and those Soviet officers who suddenly decide to stand under Hitler’s banners. He understood and emphasized that for the Reich it is not a big financial work:
Do you think we bought it very expensive? No, very cheap. We gave him the retirement of Lieutenant General - 20 thousands of marks a year, gave him a mansion in the suburbs of Berlin.

So the talk about the fact that the “patriot” Vlasov was going to build something there from Russia, “cleansed” from Bolshevism, is clearly “in favor of the poor”.

The fact that at the last stage of the war (when it became clear that the Soviet troops defeated the Nazis) says the typical adaptive nature of Andrei Vlasov, the fugitive general was about to flee again. This time in the USA. To this end, he managed to visit the American “mission”, where he received documents enabling them to go overseas (documents are kept in the archives of the FSB of Russia, in that part of it which is dedicated to the Vlasov case). For some reason, the ideologists of “patriotism” of Vlasov do not like to mention this fact, otherwise they would have had to invent a theory that Andrei Andreitch, who, by the way, had recently married two other wives at once, was going to “wave” to America to start building an “independent Russia” from there ...

Andrei Vlasov is supposedly the real agent of the Kremlin’s Strategic Intelligence in the Third Reich. He is a hero and a patriot who was “transferred in a special way” (this word causes special emotions ...) across the front line. To the question: why was “thrown”? - supporters of this version answer: with the very purpose that Vlasov would create a POA (CONR) from Soviet prisoners of war who would receive German weapons and uniforms, and on the battlefield they would fight the Nazis themselves. Such a strategy ...

Why, then, Vlasov was hanged in 1946? Like, and then, that he could “tell something extra” and undermine the authority of Stalin ...

What a “beautiful” version, designed to justify both Vlasov and Vlasovites ...

But only this version does not hold water. Already from the moment of the idea of ​​“transferring” Vlasov to the rear of the enemy, everything looks clearly far-fetched. Of course, the situation in which Vlasov in Moscow continued to be trusted after the failure near Kiev, when a different fate awaited many other commanders, raises questions. But to consider the fact that Vlasov was trying to “abandon” the Germans through persistent battles of the Red Army (now near Kiev, now near Moscow, then under the command of the 2 Shock Army) is too much. It turns out that under the “he did not abandon himself”, and near Moscow he completely “disrupted” the Kremlin’s plans, taking part in the first major defeat of the Germans ... Only on the third attempt, did the Kremlin introduce it, you know, at the cost of the death of the Second Shock Army ... M - yes ... Version ...

By the way, even if you close your eyes, plug your ears and assume that General Vlasov is really an agent who trained ROA to help the Red (Soviet) Army in the rear of the Germans, it turns out that the Kremlin was digging a hole for itself from this ROA (CONR). Why? Because the recruitment methods of fighters and commanders for ROA were “strange” for the Kremlin: cultivating the idea of ​​“anti-Stalinism” for the victory of “Stalinism” is cool ...

By the way, supporters of this conspiracy theory of Vlasov's heroism cite as evidence that the ROA division under the command of Bunyachenko in 1945 supported the Prague uprising. Like, that’s the clue ... That’s the anti-Hitler essence of the ROA ... But the decision to support the Prague Uprising (already at the outbreak of a big war) was made explicit so that the traitors to the Motherland could be rehabilitated by their “Czech articulate little word” before their own people (and more likely, just jerk to the Americans). And the decision Bunyachenko did not correspond to the decision of Vlasov. General Vlasov, according to the adjutant General Ashenbrenner (Senior Lieutenant Bushman), was depressed by the prospect of fighting the German troops, and therefore Vlasov refused to support the Prague citizens ...

Yes, and about the battles of the POA shoulder to shoulder with the soldiers of the Red Army against the German troops there is no documentary evidence. Apparently, there is no such evidence for the simple reason that there were no facts themselves ... But there was praise for the actions of Vlasovites from Goebbels: “I note the outstanding achievements of the units of General Vlasov” (from Goebbels’s diary). This is after the February battle of the Oder with the Soviet troops. With the Soviet! ..

And where is Russian patriotism here? Where is the heroism and concern for the Russian people? Yes, only Goebbels’s laudatory record in his diary (well, his (diary) wasn’t exactly “forged” in the NKVD - no need ...) can close all questions about the rehabilitation of Vlasov. The patriotism of Vlasov can be proved only by a person who is willing to confuse his desire to preserve his, forgive, soft place in any conditions, with something very sublime ...