Who and what made Patriotism of General Vlasov? Part one

December 24 2013
113
The course of “perestroika”, announced by Gorbachev some time after he came to the post of general secretary of the CPSU Central Committee, turned out to be closely linked not only with “progressive” economic ideas, but also with new ideas, let's say, of a humanitarian nature. It was from the second half of the eighties that new interpretations of the “correctness” of fiction, art and even stories. The so-called liberal historiographic science began to come into vogue, the main thesis of which was approximately as follows: you can forget everything that was included in the concept of “studying history” before - now you need to take a course on “restructuring” public opinion about the course of national and world history; New historiography and historiosophy should be fashionable ... This thesis "untied" hands to those who believed that they were connected - and the new historical science, like a stream of feces, began to overwhelm both the educational field and public life in general.


Historiographic sensations and pseudo-sensations began to be born in such a volume that, it seemed, literally everyone who saw a “creative grain” saw themselves as describing the course of historical events. The concept of “liberal historian” was born. And if initially the concept and activities of such people seemed very interesting both to professionals and ordinary people, over time the liberal epithet turned into a frankly abusive one. The liberal historian today is perceived not at all as a historian, but as someone who is overly eager for a sensation, and a sensation aimed exclusively at the cultivation of Russophobia or dubious values.

The Katyn case, the battles of the Great Patriotic War, the Russian revolutions, the role of individuals in the history of the state, the era of industrialization, the era of imperial reforms of the middle of the 19 century - these are just an incomplete list of what if not turned upside down, then served with spicy sauce. With such a sharp, that history and many historians have become frankly similar to, excuse me, corrupt girls - who pays, that “girl and dances”, he and “dines” ...

One of the topics that many representatives of the so-called creative community wanted to spice up with their own sauce was the topic of betrayal of General Vlasov. At the beginning of the 2000-x (apparently, on the post-perestroika wave), voices that General Vlasov was no longer a traitor, that he was a true Russian patriot, who applied forces to fight "vile Bolshevism" and "Stalinism", began to erupt. One of the first ideas to rehabilitate the “honest” name of General Vlasov was born by Sergey Belavenets (he is the monk Nikon, a member of the council of the so-called Russian nobility assembly, winner of two awards of the Russian Imperial House, confessor of the movement “For Faith and Fatherland”). His example was followed by representatives of the Russian Orthodox Church Abroad (ROCOR), who after the publication in 2009 of the book of the priest of the ROC, Archpriest George Mitrofanov, “The Tragedy of Russia:" forbidden "themes of the history of the 20th century in church preaching and journalism," also decided to reflect on glorification of Andrei Vlasov. 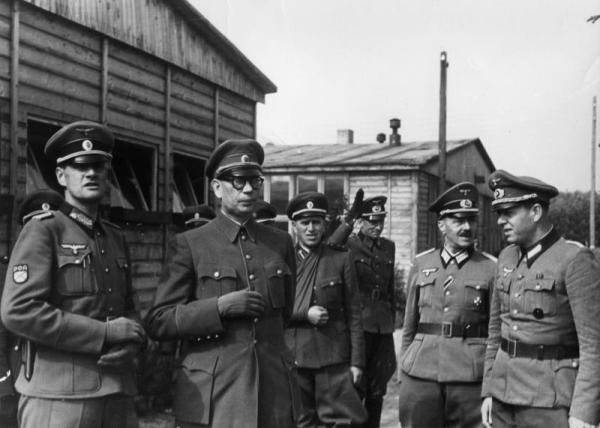 And here are some of the fruits of a liberal approach to the essence of national history in excerpts from readers' comments on Vlasov’s materials in the media:

Some Hukku writes:
General Vlasov was a great man. The embodiment of his manifesto could save the country. And the result of Stalin’s activity was a miserable existence.

Quotation from Wikipedia:
Andrei Andreevich Vlasov - Soviet commander (Lieutenant-General), a participant in the Battle of Moscow. He commanded the 2 th shock army, in the course of the Luban offensive in 1942, he was captured in Germany and cooperated with the leadership of the Third Reich against the political system of the USSR.

Against the political system, it turns out, the "great" man went ...

The ideas of rehabilitation and even the glorification of General Vlasov and all those who subsequently rose up under the banner of the ROA (Russian Liberation Army), in fact having taken the oath of allegiance to Hitlerite Germany, began to move actively in the media environment. The promotion of these ideas was carried out and continues to be quite active and persistent. So, for example, the Synod of Bishops of the ROCOR held a seminar in which the topic of General Vlasov was assigned a special role. Here are some excerpts from that seminar:

The tragedy of those who are called “Vlasovists”, i.e. members of the movement, on the basis of which emerged the Russian Liberation Army (ROA), is truly great. In any case, it should be comprehended with all possible impartiality and objectivity. Beyond this understanding, historical science is turning into political journalism. We think that in order to better understand what was happening in Russia - and with Russia - in the crucial years of the past century, a “black and white” interpretation of historical events should be avoided. These events, by their very nature, were so complex, internally contradictory and multi-layered, that an attempt to characterize them with any one word-concept was doomed to failure in advance. In particular, the naming of the genes. A.A. Vlasov is a betrayal, in our opinion, there is a frivolous simplification of the events of that time.

Was there a gene. A.A. Vlasov and his associates - traitors to Russia? - we answer - no, not at all. Everything that they did was done precisely for the Fatherland, in the hope that the defeat of Bolshevism would lead to the re-establishment of a powerful national Russia. Germany was considered by the "Vlasovites" exclusively as an ally in the struggle against Bolshevism, but they, the "Vlasovists", were ready, if necessary, to resist the armed force of any kind of colonization or dismemberment of our Motherland. Paraphrasing the famous statement of the late Russian philosopher Alexander Zinoviev, a gene. A.A. Vlasov and his entourage, “aiming at communism,” made every conceivable effort to “not get into Russia.” And these sentiments, these aspirations were not particularly hidden in the “Vlasov” environment, and that is why the haters of Russia, both in Germany itself and in other countries, did everything they could to prevent the timely creation of an efficient Russian Liberation Army, and especially - the Russian national government.

That is, at least, the inconsistency is obvious here. The Synod of Bishops calls not to slip to exclusively “white” or exclusively “black” in the interpretation of the course of history, but immediately declares that General Vlasov is not a traitor, but a fighter with Bolshevism ... Even without half tones ... Interesting logic ...

ROCOR, a number of dignitaries of the Russian Orthodox Church, as well as liberal interpreters of history, have been trying for a long enough period to present Andrei Vlasov as a heroic figure that the illiberal historians unjustly slandered. And they try, despite the fact that in November 2001 of the year, the Military Collegium of the Supreme Court of the Russian Federation refused to rehabilitate General Vlasov and many so-called “Vlasovites”.

So, what are the main points of supporters of the idea that Vlasov is not a traitor, Vlasov is a true Russian patriot.

Main idea: Andrei Vlasov (already outside the USSR) himself pronounces an accusatory anti-Stalin and anti-Bolshevik speech. Like, what is there to think and guess when a quick general presents us his point of view.
But is it your own? .. Or even not so, but how many general points of view did General Vlasov have? ..

Referring to that speech - the so-called Prague Manifesto (manifesto of the “Committee for the Liberation of the Peoples of Russia”) 1944 of the year. We present excerpts from this speech (video version -

The Bolsheviks took away the freedom of speech, freedom of belief, freedom of the individual, freedom of residence and movement, freedom of industry and the ability of every person to occupy a place in society in accordance with their abilities. They replaced these freedoms with terror, party privileges and arbitrariness perpetrated on man. The peoples of Russia forever lost faith in Bolshevism. The committee aims to overthrow the Stalinist tyranny, liberate the peoples of Russia from the Bolshevik system and return the rights won by the 1917 people's revolution to the people of Russia, end the war and make an honorable peace with Germany, create a new free statehood without the Bolsheviks and exploiters.

What a fine general Vlasov! - exclaim in the ROCOR. What are the right words said Vlasov! - echo them those who firmly believe in the patriotism of the escaped general. Yes, he wanted to use the power of the German army to create a sovereign Russian state free from Bolshevik "tyranny"! - say the same people.

But after all, bad luck ... Neither the ROCOR, nor among other modern fans of the ROA and General Vlasov does not take into account other documentary evidence related to the name of the fugitive general.