December 24 2013
102
Deviyani Khobragade - Indian Vice-Consul, Deputy Head of the Consulate General of India in New York. 12 December, she escorted her daughter to school when the way was blocked by vigilant American police who did not care who was in front of them: a diplomat, a cook from McDonald's, a parking cleaner or some other seeker of the American dream. Vice consul arrested. Apparently, the New York cops can easily arrest Barack Obama, or, say, Samantha Power. Khobragade was chained into handcuffs, searched and brought to the police station, where they said that she had deceived a person, namely a nanny: when she applied for a visa, she promised to pay generously - four and a half thousand dollars a month, but then offended the servant with money. The diplomatic immunity of the guards was not interested. 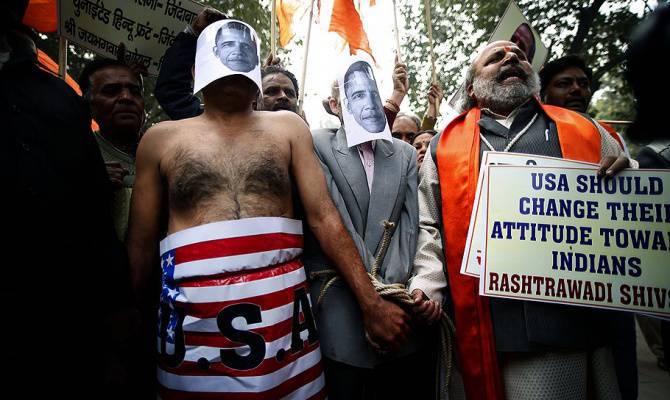 Next was the camera. The media have colorfully painted the neighbors of the diploma: drug addicts, prostitutes and other pleasant company, which the staff of consulates usually do not indulge with their presence. It is possible that many of the detainees were soon released, while others were not so scared about the time that Khobragade threatened, namely, fifteen years.

This is not fiction or newspaper "duck". Information about the arrest and search was confirmed by the US Bailiffs Service. The diplomat was really accused of having overstated her last salary in the visa application for the housekeeper.

Hindus still managed to pull Khobragade out of jail - they pledged a quarter of a million American greens.

In New Delhi, they decided to explain to the Americans that they did not do well. Indian Foreign Ministry summoned US ambassador Nancy Powell to the carpet and conveyed a protest.

Indian Foreign Minister Salman Khurshid demanded to stop the case against the diplomat. Other members of the Indian Cabinet wished the Indian side to be apologized.

Then the Indian government demanded that the American diplomats return special identification cards confirming the diplomatic status of the person and employees also to extend the visa. In the program "News of the Week" showed how Indian bulldozers clean concrete fencing installed around the US Embassy in New Delhi.

It is reported that Khobragad was subjected to a humiliating intimate inspection. If this is true, then the question arises: why? What were you looking for in secluded places? Nanny money?

Ordinary Indians also protested against the diplomatic humiliation of their homeland. Anti-American protests swept India. They go to this day. Star-striped flags are burned daily. On December 20, protesters smashed the pizzeria of the Dominos Pizza restaurant chain in the Mumbai suburb and called on citizens to block American-made goods.

The State Department composed the statements.

Marie Harf, a spokeswoman for the US Department of State, said that the diplomatic dispute between the United States and India is “a separate episode”, and in general with India, America has “broad” and “deep” ties, and even “friendly” ones. Moreover, the American-Indian friendship takes place "against the background of close and respectful relations that unite us and will continue to unite."

Is that so? Is this an indication for New Delhi? It is said - they will unite, then they will?

Harf added: “We definitely do not want this to affect our relationship. We understand that these are sensitive issues. ”

In short, they "understand", but "do not want," and even "definitely." American exclusivity in all its glory. 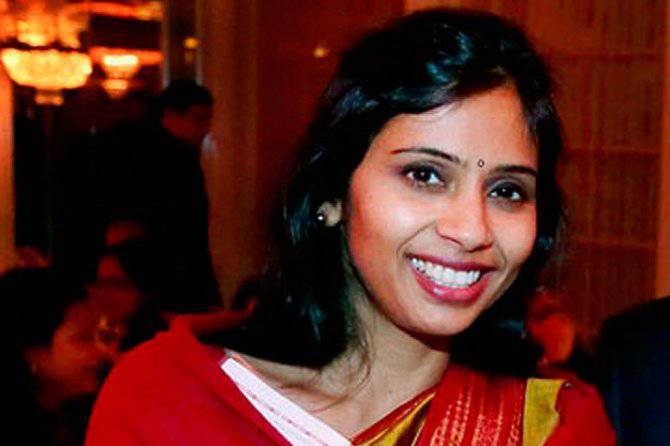 Marie Harf in the best traditions of thriller saved the most important thing for last. The culmination of her statement was devoted to the details of the vice-consul’s case: the United States “back in September notified India that a citizen of that country had declared an inappropriate attitude on the part of the vice-consul in New York.”

The State Department believes that the actions of the police in relation to Khobragade did not go beyond the standard procedures. And really: in the same way, they undress and search drug addicts, prostitutes, thieves, fraudsters and those suspected of terrorism.

And then delegates from the US Congress arrived in New Delhi. Apparently, they hoped that the words of Mari Harf would sober the protesters, and everything would go as before. Well, think about it, divide someone ... Americans can, they have - exclusivity. Definitely…

Congressmen in vain spent the budget money (however, they are not the first time). It turned out that the Indians have pride. No one wanted to talk to the messengers.

Then John Kerry himself called to India. But he, as they say, “lowered the level”: he only got through to Shivshankar Menon, adviser to the Prime Minister of India on national security. The US Secretary of State "expressed regret" because of the incident with Deviyani Khobragade and was quick to call the US-India relationship "close" and even "vital."

As for the Indians, they are really angry. And they went to the extreme steps.

India has banned on its territory to supply duty free alcohol to American diplomatic institutions. Simply put, American diplomats who are famous for their love of the feverish in large quantities and cheaper will have to lead a sober lifestyle. American diplomat - without a banquet and a bottle ?! John Kerry had to explain to India that he has two daughters, and he understands something in humiliation.

But the Indians are not interested in his understanding. Few people on the planet are already interested in understanding the United States. It’s very peculiar, this understanding! To express “regret” and harshly make it clear that further relations between the countries will “definitely” be as before. So only insolent behaviors that are suitable historical times would end life young - in a duel.

As for modern geopolitics, today every American “definitely” speaks not about confidence, but about the increasing weakness of the United States. Critical and condemning voices are heard from everywhere - from India, Brazil, Venezuela, Pakistan, Afghanistan, China, Russia. The unipolar world is over, and Washington understands this. Therefore, Barack Obama is silent: a diplomatic scandal, whatever one may say, is another failure. Another. It seems that Obama is not very lucky. It seems that the devil himself is playing against him ...

Ctrl Enter
Noticed oshЫbku Highlight text and press. Ctrl + Enter
We are
Comrade Power, do not spit!Results of the week. “I would not live my life differently if I had such an opportunity”
Military Reviewin Yandex News
Military Reviewin Google News
102 comments
Information
Dear reader, to leave comments on the publication, you must sign in.