Save the family - save Russia 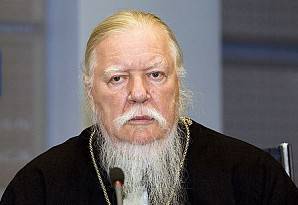 The event, which in fact will complete a series of major events of national importance in Russia, is still in the field of close attention of regional and federal media. 20-21 December, the II Stavropol Forum of the World Russian People’s Council will be held. The main idea of ​​the Forum is “Moral and responsible person - the basis of a strong state”. Ways of saving such an institution of Russian society as a family will also be considered by participants in the discussions in the sections of the event. There are many priests among the experts. Archpriest Dimitry Smirnov, Chairman of the Patriarchal Commission on the Family, Protection of Motherhood and Childhood, spoke about the position of the Russian Orthodox Church on this issue.


- Father Dimitry, what, in your opinion, is the significance of the II Stavropol Forum of the World Russian People's Council?

- The fact that such forums are needed to discuss very important issues. Today, issues of personality and family are particularly relevant for Russia. Especially - the problem with the male population.

- What threatens the Russian family today?

- The family is threatened with decay. There are a lot of destructive "winds", which are expressed in divorces, in the irresponsibility of the male part of the population in relation to their own children, there are a lot of cohabitations without the foundation of a family. It turns out that we are already somehow moving into the category of the animal world, in which there is no family, but there is a temporary connection. Women suffer from this first of all, because every normal woman, naturally, wants a family, wants to get married. And, of course, children. Children growing up without a father, it is difficult to fully educate, especially boys. It turns out a vicious circle. There is no father in the family, there is no man in the school, girls become more mature in the class before, and such a womanlike creature grows up, unable to feed the family or bear responsibility for it. Favorite phrase of the modern young man: "I am not ready!". He is not ready for the birth of children, he is not ready for three or five of them, he is not ready to feed them, he is not ready to remain faithful to his wife, and so on. These are people who are not ready for the most natural things. Animals that have reached a certain sexual age are ready, and man is the crown of nature - so he is not ready, especially in the male part. This, of course, amazing! The fact that it is noticed, it is discussed, submitted to the forums is very important.

- In the last decade, big demographic problems and a decline in the birth rate have appeared in Russia. What does all this lead to and why even in the Caucasus are divorces frequent?

- The trend is towards self-destruction of the people, and therefore the state. Other nations will come and live here. And those who remain will be in service. After all, there was already a period when the former elite of the state worked as taxi drivers in Paris, in the Balkans. These are the places that are prepared for us as workers in our further stories, if we somehow do not come around.

We are on such a face when we face extinction in history, along with our culture, language, and so on. This is the trend. It is possible, without an arithmometer on the accounts, to calculate when we all end. This should concern us, and we, so to speak, should not be thoughtless about this, drinking beer, smoking, throwing cigarette butts out of the windows of a car and thinking that everything is in order. Not all is well. We have no demographic problem, we have been living in a state of demographic catastrophe for a long time. And in the short term, there is no way out of this. We are waiting for another demographic hole in a few years. With such an attitude to a woman, to the family, to children and even to abortion. Because we have about a million abortions every year through our abortion clinics and the same amount unofficially. That is, some citizens made their business killing children. We have the most popular contraceptive - abortion. Do not want to give birth. Well, if they do not want to give birth, the state will disappear.

- What measures are most effective in anti-abortion movement?

- The most effective is enlightenment. It is necessary to introduce it in the compulsory school electives. Very conclusive lectures should be. So that every boy and every girl take this course. If you want suicide to our people, then you do it, and if you want what we teach you, and our school itself have lived in history, then you need to change your attitude towards the family.

- So we are to blame? What do you need to raise a man from a boy, and a real woman from a girl?

- For this you need a father in the family.

- And if there is no father?

- Then you need to know what happened to him. Where did he go?

- Well, you understand, now there are different situations ...

- I understand. For a start, I would advise all women to return to the execution of the seventh commandment. As far as you know, it sounds like this: “Do not commit adultery!” Yet the ancient fathers of the 6-7 church of the century said that if a woman loses shame, then no one will be saved. The modern woman - this is our national misfortune - has become very accessible. She does not have to persuade for a long time. And if a woman starts to appreciate herself again, then everyone will be in the queue, and she will choose from 20-30 applicants for her hand and heart. This accessibility of women gives rise to many problems, above all the irresponsibility of men. Let every woman say: “Oh, you love me very much. Well, great! On Monday, we are going to apply to the registry office. ” And then women, as it was 70 years ago, will not open their arms for the first comer, but only through marriage. And believers will still be married. They say that even Valery Pavlovich Chkalov got married in 1937, he also found the year when he was to be married ... and he was not afraid of anything. If we return to this, then men will be responsible, they will fight for a woman, they will appreciate her. And now we have a competition like animals. Before how? It was impossible to imagine that a married woman so easily passed from hand to hand, and vice versa. If the man got married, the marriage was stable. Divorces were only in the very high society, and for this the author of the emperor himself was needed. It was the rarest thing - just a hundred years ago. And now, please, like animals, and it is clear that this is not at all well. No need to follow the "Hollywood" prescriptions, and return to our usual traditional family values.

- What should the state do to revive moral education, and what should it not do?

- What is the Russian Church doing in this direction?

- All that is possible. Here I am doing an interview on television, although I understand that they will only take one phrase from this, which will distort the entire context. It's like this all the time. I recently gave an interview, and one phrase went. Secondly the newsand they took it off, do you understand? Ten minute text. It is necessary to change the leadership on all channels and put one that will be puzzled, will fulfill not liberal pseudo-values ​​that destroy our people, but traditional ones. To put traditional people in positions and to puzzle them. Tell them: “You will receive money for this, and if you return to“ liberalism ”, we will fire you! We will also put you in jail, since you are the spiritual killer of our people. " That's all. Remove everyone from the ether, any rag-tag that sows decay and suicide. Maybe we can get the drug dealers on the air weapons, prostitutes business organizers? You can not promote terrorism. And, of course, monuments to terrorists: Lenin, Sverdlov, Uritsky. They should all be withdrawn from the country. Rename all the streets, return the old names to them, why do we need new ones? Metro station "Voikovskaya" - Voikov is a murderer, a terrorist. Need to call something more decently - “Flower”, “Gladiolus”?

“Were they going to rename them recently?”

- People fight for it, but indifference is complete. We are fighting terrorism, and in honor of a terrorist we have Leninsky Avenue. What is a terrorist? Vaughn, lies, spreads his ulcers to the whole country, in every city he stands, waves his hand. What is difficult to hit, or what? But now it’s about what, what measures need to be taken. If we want to get rid of terrorism, prostitution, the collapse of the country and family, we must promote that which contributes to the family, this is understandable. Now, if you look at how history is taught in America, then it follows that the Americans won the Second World War, and in Europe it is also taught. There is one line about Russia that participated in the anti-Hitler coalition, that's all. They educate their citizens as patriots.

- You have a school for children on the territory of the temple. Are they taught moral education?

- There is a Sunday school not only for children, but also for adults. Its high school - eleven.

- Do many people come to faith at all?

- Of course. There are even people 90 years who want to be baptized consciously. Several people were baptized. Not only young.

- A total of two hundred now. We have many large families. There are families of eight people and nine, but mostly five or six, in general, a lot. And as five people, we do not even consider having many children.

- Do you have a lot of children?


The press service of the headquarters for the organization and holding of the II Stavropol ARNS Forum.

Ctrl Enter
Noticed oshЫbku Highlight text and press. Ctrl + Enter
We are
The state is obliged to protect its unity. Opinions of experts and priests about the new billReligious conflict in Abkhazia? It is possible
Military Reviewin Yandex News
Military Reviewin Google News
177 comments
Information
Dear reader, to leave comments on the publication, you must sign in.