December 24 2013
13
At the end of 1943, the tank armament testing department (WaPruf 6) entered into agreements with BMW and Weserhuette to develop the so-called “small fighter” tanks»- Panzerkleinzerstoerer. Later, such a machine was named "Rutscher" (fidget). However, at the end of February 1944 this work was canceled, since the tank destroyer Jagdpanzer 38, later called the Hetzer, was adopted.


Rutscher projects are back at the end of 1944. At the above-mentioned meeting of the Tank Development Commission, which took place on 23 on January 1945, Chief of Staff of the Inspector-General of Tank Forces, Major General Tomale, said that at present the development of the project on a small tank destroyer is a very important task. These cars were considered as weapon infantry support melee. At the same time, it was believed that it could inflict "maximum damage to the enemy with the cost of its production of the minimum amount of scarce raw materials and labor."

Speaking after Tomale, Colonel Holtshauer, who headed the tank weapon test department (WaPruf 6), said that over the past two years more than 20 various “small tank destroyer” projects were considered, but only projects from BMW and Weserhiitte were acceptable for manufacturing .

During the discussion, it was decided to develop a combat vehicle with a mass of 3,5-5 tons with a crew of two, engine 90 l. with. (supposed to use the 4-cylinder Tatra). In addition, the option of installing a FAK-5 Zahnradfabrik 45-speed gearbox in a block with an 150-strong Saurer diesel engine, the prototype of which was supposed to be tested by March, was considered on the car. 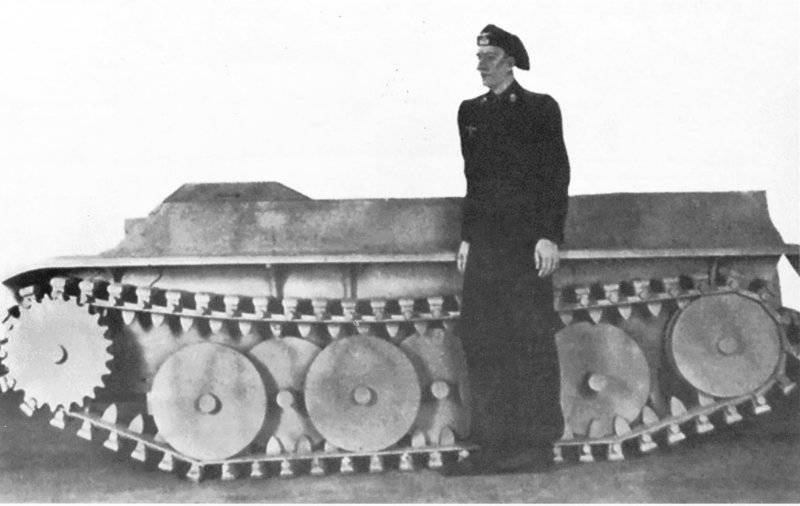 The second version of the small tank destroyer “Rutscher” from BMW with a modified hull shape. To compare the size of the car is next figure tanker (SP)

The thickness of the armor was 20 mm front of the hull and 14,5 mm on the sides and stern, the total height of the machine was assumed to be no more than 1,5 meters, and the clearance, for better permeability, should have been at least 350 mm. 80-mm (to be exact 81,4-mm) Panzerabwehrwerfer 8 H63 anti-tank gun (8-cm PAW 8Н63) and a machine gun were supposed to be used as weapons. It was planned to fabricate five Rutscher samples in the shortest possible time in order to determine its characteristics and to consider the possibility of organizing mass production.

There should be a small digression, and say a few words about the 80-mm gun PAW 8H63. This artillery system, designed and manufactured by Rheinmetall in 1944, was created as a further development of the Offen Roh anti-tank grenade launcher. Her shells were of rather original design - they had a cumulative head, in the center, in a cardboard sleeve, there was a propelling charge, and in the lower part - six stabilizers. When fired, the role of the powder chamber was played by the space between the tail and head parts, in which the propelling charge was located. With the passage of the projectile through the barrel of the charge burned completely.

Externally, the PAW 8Н63 looked like an ordinary cannon - it had a carriage, shield, wheels. Serial production of these guns began at the end of 1944, at the factory of the Wolf company in Magdeburg, and until the end of the war the 301 artillery system was manufactured.

For firing from PAW 8Н63, shots were used with a cumulative projectile Pwk.Gr.5071, which had an initial speed of 520 m / s. The armor penetration rate of the projectile at a distance of 750 m was 145 mm normal. However, the accuracy of the PAW 8Н63 was significantly lower than that of conventional anti-tank guns. In addition to the cumulative, high-explosive fragmentation projectiles were used for shooting from PAW 8Н63, the range of which was 1500 m.

The main attractive point of using the PAW 8Н63 as a weapon for the “light tank destroyer” was a small rollback of the cannon with a rather large caliber of the artillery system. By the way, the Luftwaffe command, which was planning to use this machine for arming paratroopers, took serious interest in the Rutscher project. 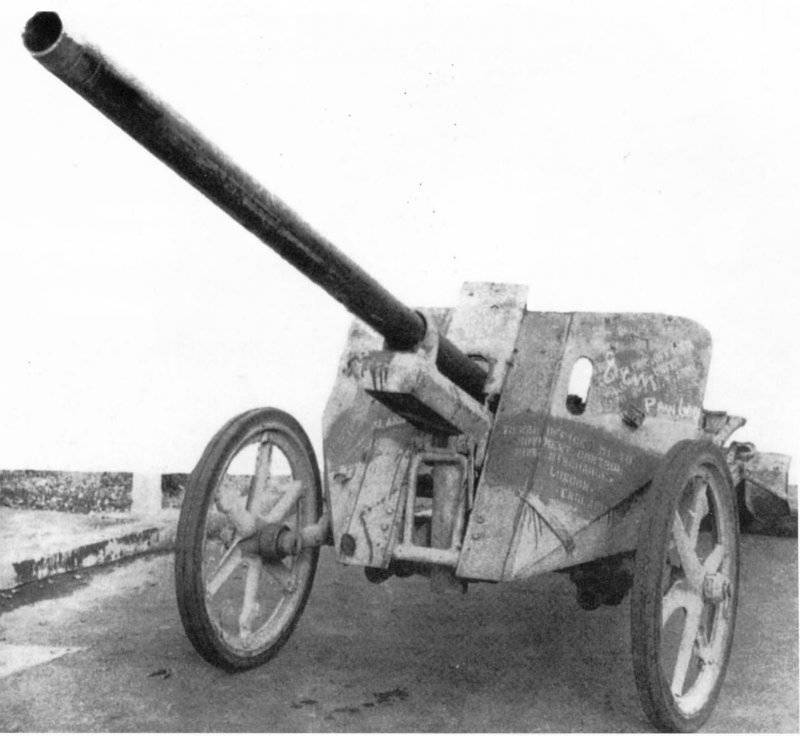 General view of the PAW 80H8 63-mm anti-tank gun. These artillery systems were supposed to be used for armament of small tank destroyers “Rutscher” (SP)

The progress of work on the “small tank destroyer” was considered by 19 in March 1945 at a meeting of the headquarters of the inspector general of tank forces. By this time, the options “Rutscher” of BMW companies weighing 3,8 tons (weapons - two 80-mm guns PAW 8H63), Bussing-Nag weighing 5 tons (the project assumed wide use of automotive units in production), Humboldt-Deutz weight about 5 tons and Weserhuette weighing about 3,5 tons (completely original development).

During the discussion, the military came to the conclusion that the creation of a full-fledged combat vehicle with specified characteristics when using components and assemblies that were already in production is impossible. And for the development of self-propelled guns of the original design (with the new engine, transmission and chassis) mass 3,5-5 tons and the development of its mass production will require at least one and a half - two years. It was also noted that when using industrial components and assemblies, it is possible to create and begin mass production of self-propelled units armed with an 80-mm PAW 8H63 X-gun, but with a weight of 7 — 10 tons (versions of such machines offered by Daimler-Benz) in a fairly short time. However, taking into account the fact that the PAW fire was effective at distances less than 600 meters, the creation of such a machine was considered inexpedient as quite expensive, but of low combat value.

As a result, the creation of a “light tank destroyer” and the organization of its mass production in the near future was considered inexpedient. At the same time, the companies Weserhuette and Daimler-Benz were offered to carry out further design of self-propelled units weighing 3,5 and 7,5 tons, respectively. After the manufacture of prototypes and their tests it was supposed to return to the discussion of the need for the production of a “small tank destroyer”. It was recommended to consider the possibility of arming the machines not only with the 80-mm PAW 8Н63, but also with the 75-mm KwK L / 48 cannon to ensure effective firing at distances over 600 meters. 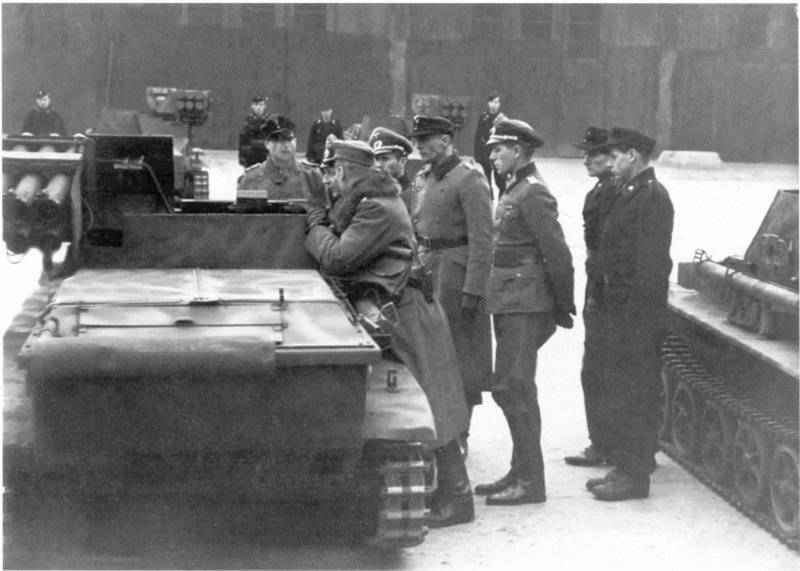 The command of the Berlin garrison inspects the Borgward wedges, armed with an 88-mm RPz.B 54 “Pantsershrek” rocket launcher. Spring 1945 of the year. The photo shows four cars, and in addition to installing six "Panzershrek" on a special installation, another grenade launcher laid on the nadgusenichnaya shelf (PI)

Perhaps, the above-described work on the creation of a “small tank destroyer” is associated with the appearance of a self-propelled anti-tank installation of six RPN.B 88 “Panzershrek” RPZ.B 54 rocket launchers on the Sd tanketki chassis. Kfz. 301 B-IV Borg-Ward. In some sources, this machine is referred to as the Panzerjager "Wanze" (bug).

The Borgwarts began to enter the army in 1943 and were intended primarily as radio-controlled vehicles carrying explosives. A special discharged container with explosives was fastened on the wedge heel, which was exploded after the B-IV had moved a safe distance. With the help of these charges, they made passages in minefields, undermined enemy firing points, etc.

“Borgward” was produced in three versions (Ausf. A, Ausf. B and Ausf. C), and was a machine mass 3,6-4, 85 tons with an engine power 49-78 HP, which allowed it to move at speeds up to 40 km / h While moving the car on the march, it was led by a driver, for whom there was a special place. Borgvard's armor protection was 8 — 22 mm, depending on the modification. 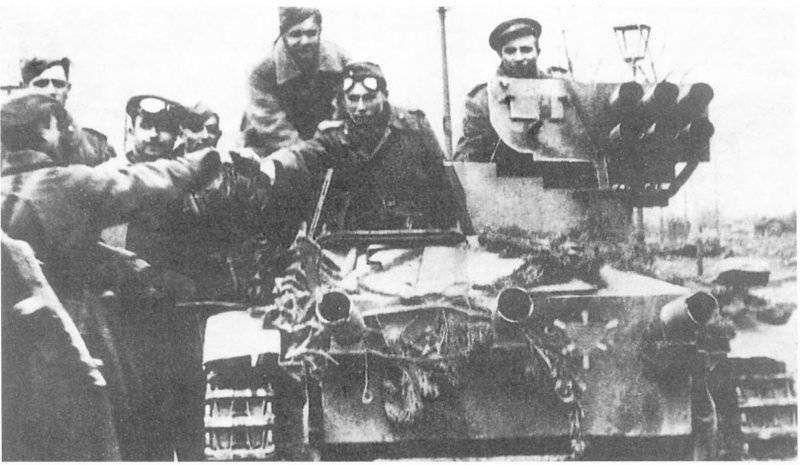 Fighters of the Red Army on the captured German Borgward wedge with the installation of six 88-mm "Panzershrek". Berlin, May 1945 of the year. In addition to grenade launchers, the machine has three smoke grenade launchers on the front hull plate (ASKM) 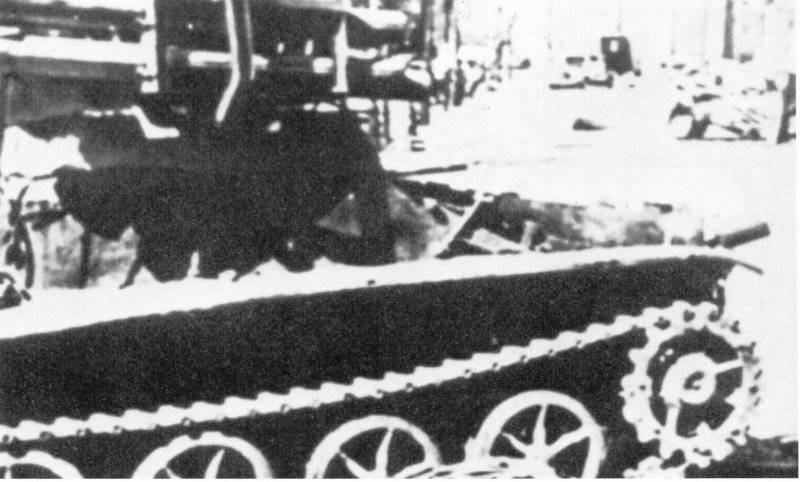 The German Borgvard wedge with the installation of six 88-mm "panzershrekov", thrown on the streets of Berlin. May 1945 of the year (ASKM)

In total, until the end of 1944, the 1181 produced a serial machine of this type, which entered service with the battalions of radio-controlled tanks. As of 1 in January 1945, X-VUMX B-IV tanks remained in service, and even 79 were in training units and warehouses. Probably, their conversion into anti-tank self-propelled units resulted from the design of the “small tank destroyer”. Although it is not excluded the likelihood that this was done on the initiative “from below”.

The exact amount of Panzerjager Wanze made on the B-IV Borgward base is unknown. The most common figure is 56 machines. At the same time, various sources report on the participation of these self-propelled guns in the battles for Berlin in the spring of 1945, as confirmed by their photos on the streets of the city. There are references to the fact that Panzerjager Wanze operated as part of the 1 division of tank destroyers, and were also used in the band of the 11 volunteer panzergrenadier division of the SS Nordland.

Judging by the available several photos of Panzerjager Wanze, the launch pads of the “Panzershrek” were mounted on a special swing frame. In addition, some of them show the installation of smoke grenade launchers on the front hull sheet. Probably after the shot at the enemy from “Panzershrek” it was supposed to cover the withdrawal of the car for cover by a smoke grenade.

Also the machine as in the previous photo. In the background are the Brandenburg Gate. Berlin, May 1945 of the year (ASKM) 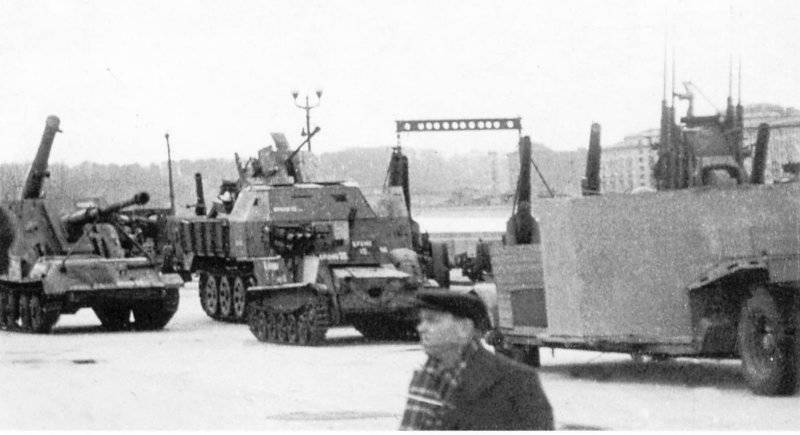 A German Borgvard wedge with the installation of six 88-mm Panzershrek at an exhibition of captured weapons and equipment. Moscow, TsPK and O Gorky. 1946 year. To the left of the "Borgvard" is visible "Waffenturger" Ardelta (ASKM)