The eternal loser. The Life and Amazing Adventures of John McCain

December 23 2013
154
The former US presidential candidate disgustingly studied, smashed airplanes and managed to bring failure to those whom he supported. 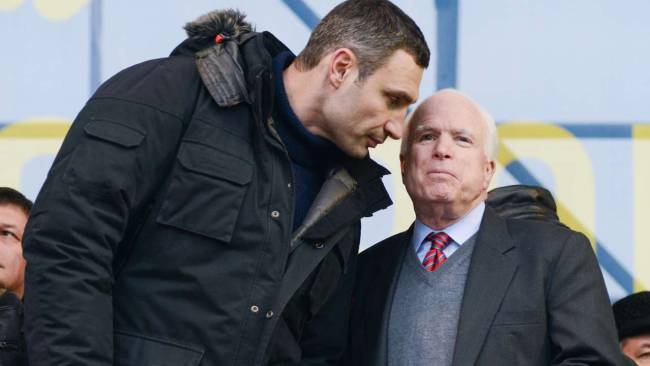 Vitali Klitschko: “Yesterday I got goose bumps on the Maidan when American Senator John McCain took his stage performance on 77 with me and said that the United States was on the side of the demonstrators

When US Senator John McCain appeared on Euromaidan in Kyiv and addressed a fiery speech to supporters of "European integration", the square responded with glee. Although in fact, the Ukrainian opposition should by no means allow McCain to go to Ukraine, since his support, as a rule, does not bode those who are addressed to it, anything good.

The launch pad for John Sydney McCain III was just perfect. He was born 29 August 1936, at the US Air Force Base in Panama. His father and grandfather rose to the rank of admirals in the United States Naval Forces, and it is not surprising that John went to the military path after school.

McCain, relying on the help of influential relatives, entered the prestigious US Naval Academy, mastering the profession of a deck pilot aviation.

John did not want to learn, showing all the habits inherent in the "golden youth". However, there was also a parental fault - while Dad made his way to the admiral's rank, the family constantly changed their place of residence, so that the young Johnny changed the 20 schools already.

At the academy, cadet McCain proved himself the most disgusting way - during his studies, he had more than one hundred official penalties for violation of the Charter, violation of uniforms, failure to comply with military discipline, and rudeness to the command.

Any other student after that would have flown out of the walls of an educational institution, but the authority of his father and grandfather covered the sins of slobs.

However, McCain was not at all hopeless: he proved himself as a lightweight boxer, knew English literature well and history. 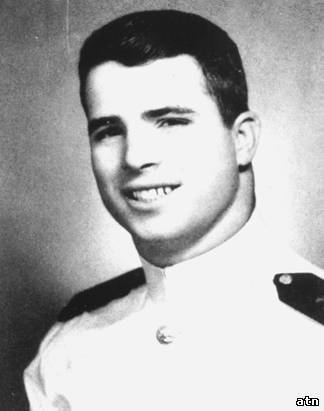 The young pilot was sent to undergo training at the famous American Pensacola airbase in Florida, where McCain revealed in all its glory. The command faded, learning about how drunk McCain was driving around at breakneck speed in his car, scaring respectable ordinary people, in company with a local striptease star. The young pilot spent more time behind the racks of numerous bars than in the cockpit.

McCain himself honestly later writes in his biography that at that time "he was ruining youth and health in vain."
When McCain was transferred from Pensacola to the Corpus Christi base in Texas, his former commanders did not hide their happiness. And in Texas, very soon they understood the cause of their colleagues' emotions - at one of the trainings, McCain crashed the plane, getting off with light bruises.

The loss of bureaucratic equipment was written off as engine failure, although it was no secret to anyone that the pilot spat on instructions and flew as God put on his soul. The world of aviation knew a lot of talented avioguligany like Valery Chkalov, but the problem is that McCain did not possess such talent.

Wise commanders did not allow McCain to roam in that period, otherwise the Third World War could well become a reality. 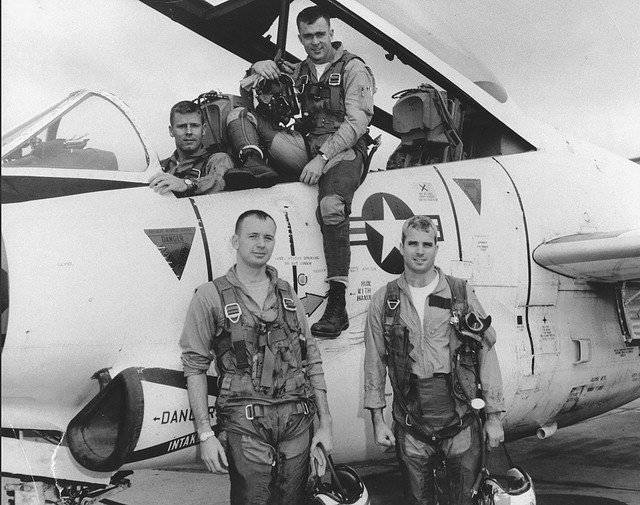 McCain (lower right) with pilots of his squadron

When international tensions eased a little, McCain was sent to serve where it was quieter — to Spain. But the command did not take into account that it is impossible to lower the eye from this pilot, otherwise he will find tension even where calm. McCain really found her, carrying the power line in flight. By some miracle, the plane did not crash, and what the Spaniards who were left without light thought about McCain was never recognized, because they were very polite Spaniards.

An accident investigation revealed that the pilot was responsible for the incident. McCain was hastily sent to the US, where he was appointed an instructor at the Meridian Navy base in Mississippi.

In American silence, McCain started a family by marrying a divorced top model with two children. Soon the couple had a daughter.
If John could live in silence and wait for a promotion, but for some reason he continued to think that great military feats were awaiting him. In fact, from the "exploits" McCain, the command simply shook: six months after the wedding, he managed to break another plane. As before, the expensive equipment was turned into a pile of rubbish, but the pilot survived.

Therefore, when McCain requested military service, he was released with joy. In 1966, McCain became a ground attack pilot on the Forrestal aircraft carrier. Here, the pilot literally blew specks of dust, because his father had by then commanded the US Navy in Europe.

However, in the 1967 year, Forrestal was sent to the shores of Vietnam, where the United States intended to bombard the government of North Vietnam with bombardments to refuse assistance to the communist rebels in the South of the country. 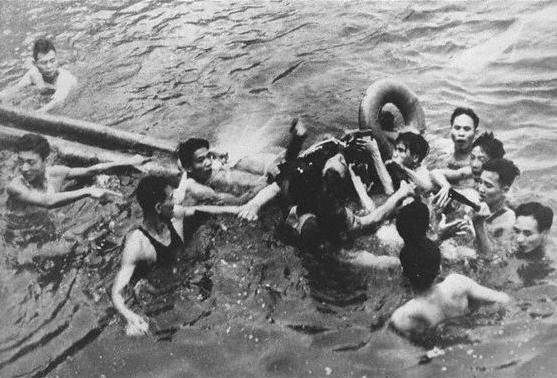 29 July 1967 of the year on the aircraft carrier "Forrestal" there was a major fire caused by the spontaneous launch of an aircraft missile. She sat down in the fuel tank of the attack aircraft McCain, after which an explosion occurred on the deck and a violent fire started. From the attack aircraft, of course, there were horns and legs, but McCain was not next to him.

As a result of a fire on an aircraft carrier, more than 130 people died, our hero, according to tradition, was slightly injured. The Forrestal was sent in for repair, and the recovered McCain on the Oriscani aircraft carrier was bombed by Hanoi.

Surprisingly, John McCain managed to make as many 22 sorties for bombing, until he finally met her - the C-75 Soviet anti-aircraft missile. The meeting was short but bright: the attack aircraft turned into scrap metal, and the pilot with broken legs fell into the lake in the middle of Hanoi.

McCain was pulled out of the water by the Vietnamese as a trophy, after which he was in captivity until March 1973.

After serving in the Vietnamese camps for five and a half years, McCain returned home as a hero, and was received personally by President Richard Nixon. By a strange coincidence, shortly after this meeting, Nixon was waiting for a “Watergate” and disgraceful resignation. 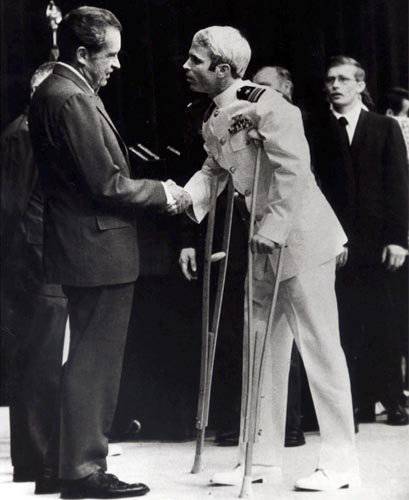 McCain continued to dream about the admiral's epaulets, but with his track record it was difficult to count on it even with a good pedigree.

In addition, while he was in captivity, his wife had an accident, after which her model appearance was badly damaged. McCain, returning from Vietnam, realized that their marriage was a mistake, and a few years later the couple divorced.

Realizing that his military career was at an impasse, John McCain decided to go into politics. Republicans just needed a die-hard anti-communist with a good biography, and McCain, the past "Vietnamese Gulag", fit in perfectly.

But in American politics one cannot count on a successful career without having serious financial resources. John McCain was provided with such a resource by marriage to Cindy Lou Hensley, the daughter of a prominent businessman, the owner of the brewing company.

In 1982, 46-year-old John McCain was elected congressman from Arizona. Four years later, he moved to the US Senate.

True, party colleagues very quickly felt that entrusting McCain with the most important issues is fraught with serious consequences. So most of his Senate career, McCain worked on the Indian Affairs Committee. What the Indians thought about it, no one knew, because they were very polite Indians. 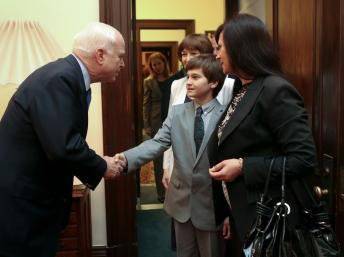 In 2000, John McCain decided to run for president. As a result, to the republican "primaries," to the dismay of the voters, a struggle developed between McCain and George W. Bush. Perhaps for the first time, Americans were able to understand what a genuine choice of the lesser of two evils means.

I must say that the "aura of a loser" pursues McCain, even when he commits good deeds. The politician and his second wife adopted a girl from Bangladesh, but this fact was not widely publicized. As a result, during the “primaries” in ultraconservative South Carolina, the Bush team launched a rumor that McCain had an extra-marital daughter from an African American.

Some believe that it was this story that had a decisive influence on the fact that in 2000, Bush Jr. was the Republican candidate, not McCain.

In 2008, John McCain still became the US Republican presidential candidate, but even his supporters frankly admitted that he has a bit of a chance to fight black Democrat Barack Obama. So it happened.

It can be said that on the path of the Republican John McCain to the White House twice stood African Americans: a virtual mistress and a real Democrat. 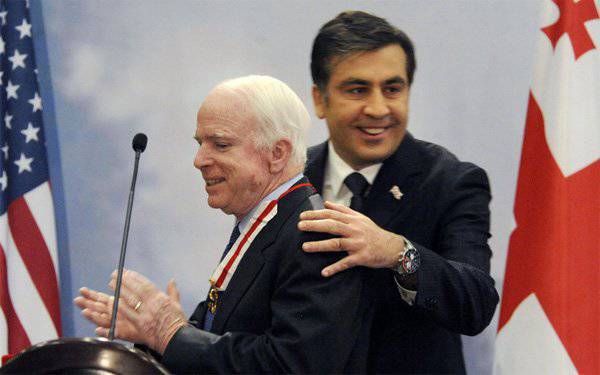 It seems that it was presidential ambitions that led to the fact that from the beginning of the 2000-s, McCain turned his attention to international politics, especially to the post-Soviet space. The ghost of the Russian anti-aircraft missile clearly did not give him rest, causing a fierce desire to fight with the "imperial ambitions" of Russia.

McCain made demands for the exclusion of Russia and China from the UN, and the creation of a "new, democratic organization" in its place. In 2005, he demanded the exclusion of Russia from the G8. In 2004, he so tired of Alexander Lukashenko that he simply banned McCain from entering the country. In response, the senator promised to fight the "last dictator of Europe." Judging by the results, Lukashenko clearly wins on points.

Having received an arc beat in Belarus, McCain switched to Ukraine, where he strongly supported the leaders of the Orange Revolution, Viktor Yushchenko and Yulia Tymoshenko, whom he even nominated for the Nobel Peace Prize. As a result, Yushchenko completely disappeared from the political life of Ukraine, and Tymoshenko spends time behind bars.

McCain was an ardent supporter of Mikhail Saakashvili. Inspired, including McCain, the Georgian president set out to regain control of South Ossetia and Abkhazia with the help of military force, which led to the final loss of the latter. Today, Saakashvili’s political weight is comparable to Yushchenko’s political weight.

When McCain began to actively support the armed opposition in Syria, supporters of Bashar al-Assad realized that they had a chance to win. 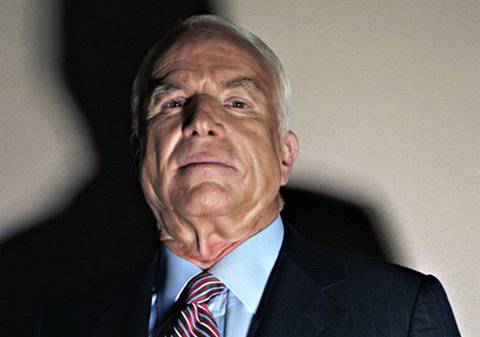 McCain regularly finds himself in ridiculous situations. In 2008, his campaign headquarters asked for campaign money at the Permanent Mission of the Russian Federation to the UN.

When Vladimir Putin made an article in The New York Times in 2013, McCain decided to answer him with a performance in ... Pravda. Apparently, the senator is still confident that since his time in captivity in Vietnam, nothing has changed in Russia.

In December 2011, John McCain began to threaten Vladimir Putin with the Russian version of the “Arab Spring”. Is it any wonder after this that the protest speeches after the parliamentary elections ended in nothing - the “aura of McCain” is capable of performing real miracles.

Once John McCain said about Vladimir Putin: “When I looked into Putin’s eyes, I saw three letters: the KGB.” If you look closely at the senator himself, then on his forehead you will see the inscription loser. And if John McCain came to Kiev Maidan, those gathered could disperse - this guy brought defeat and in more severe cases.