About the second ally of the Russian state

December 23 2013
51
How is a person looking for his way in life? The answer to this question has not been found. Sometimes, having started work, serving in one direction, people can change the sphere of their activity - sometimes radically. In choosing their life paths, some follow in the footsteps of parents, close relatives, inspired by the example of their ancestors, others from childhood, who are passionate about something, continue to do this all their lives. Third (this is the main part of the youth) choose their life path, guided by the impulse of the soul. 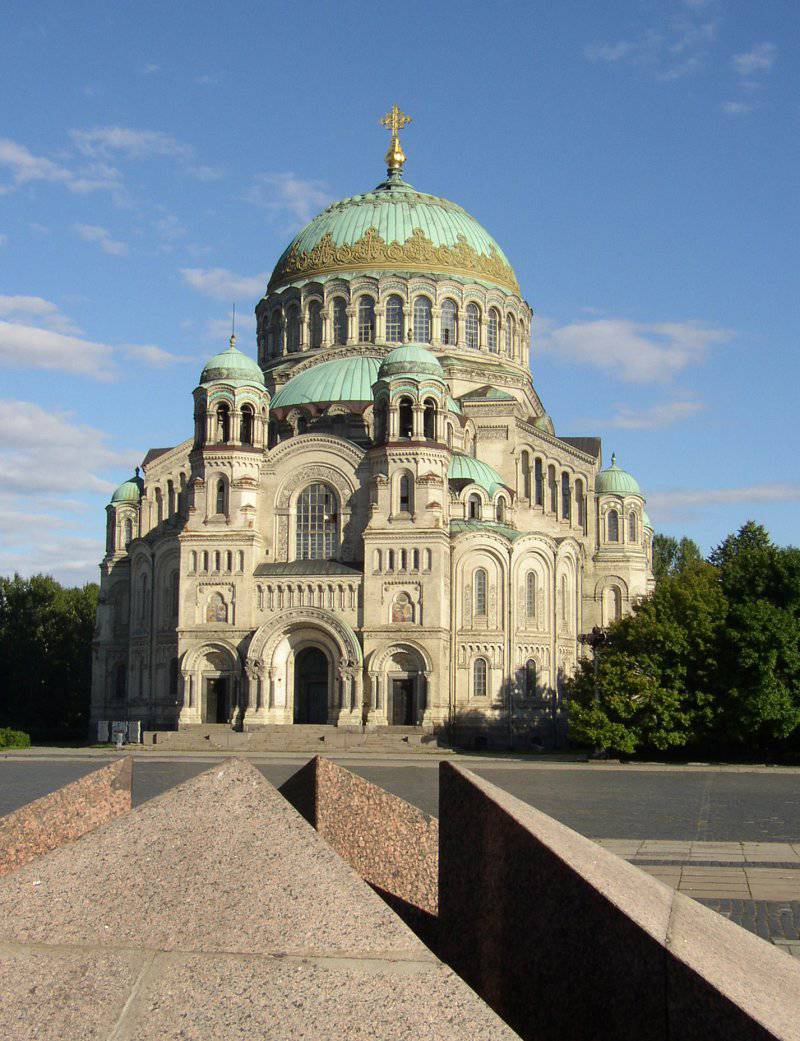 St. Nicholas Naval Cathedral (Kronstadt) was created in the image of Hagia Sophia in Constantinople. The architecture of the cathedral was significantly influenced by the Art Nouveau style that flourished in the early twentieth century.

Is it possible to fall in love with the sea, if you have never seen it, or know about it, being like a boat along the coast or moving away from it no more than a mile away? Once and for all, I fell in love with the sea and the Navy, dedicating their whole lives to them, Vice-Admiral, twice Hero of the Soviet Union A.O. Shabalin, having seen a destroyer standing on a raid as a child. Many boys, looking into the sky and seeing the endless blue of the "fifth ocean", dreamed of flying. And what a joy filled their souls when they for the first time on an aircraft took off from the ground, rising high. “I'm flying!” They shouted.

But back to the sea. On the water, people are always in danger, especially those who fulfill their military duties. Helping each other at sea is particularly difficult. In the army, when performing ground operations, any warrior can count on the help of his comrade. In the air and at sea, such assistance is problematic. Since ancient times, the man who hit the road, hoping for a happy return. Therefore, before going out to sea, before the start of hostilities, the defenders of the Fatherland always read a prayer.

The Russian army in imperial Russia fought: "For the faith, the king and the Fatherland." The Russian armed forces were called "Christ-loving army". In those days, worship was accompanied by a man throughout his military life. Military temples began to be built simultaneously with the creation of troops. For example, in the regions of the Russian Empire, after the deployment of artillery regiments, “regimental artillery yards” were established, where chapels were built without fail, and then churches. It was the same with the Cossack regiments. A long march, grueling ship life in cramped cockpits, fighting, associated with death, required spiritual support for the ship's crew.

In March 1697, a great embassy of more than 100 people was sent abroad from Russia. The members of the embassy had to master not only the science of building ships, but also master the rules for driving them at sea and creating a spiritual and moral climate among sailors. By the end of the XNUMXth century, hundreds of ships from England, Holland, Spain, France, Portugal were serving in the Atlantic Ocean. On the fleets these countries already had maritime charters in force, where the basic laws of carrying out maritime service were formulated. These fleets also gained experience of the spiritual and moral influence of the clergy on the crews. The Russians had a lot to learn in maritime affairs from Europe. In 1701, the first Navigation School was opened in Moscow in the Kuntsevo area, and five years later more than 140 of its graduates were sent to foreign fleets for long-term practice. The founder of the Russian Navy, Peter I, understood that in order to fulfill the tasks assigned to the sailors, one must learn to influence them with the strength of spirit. This education had to be carried out by a special apparatus. Naval commanders of European countries kept the sea flock under the scrutiny of the church. The ships might be missing a medic, but not a servant of God. On the French battleship Corona (early 600th century), for example, there were two priests and three monks for every XNUMX crew members. All sailors of European countries had their patron saints.

The whole life of the Russian people in the period of the formation of the Russian fleet was associated with Christianity, with the church. At birth, the boy was baptized, then he got married, baptized his children, was the godfather of the children of relatives and then he was buried when he was taken to his last journey. The emperor of Russia understood that if during the battle the priest was next to the sailor, then the morale of the defender of the Fatherland would increase. A sailor who is not afraid of death can be killed, but you cannot win. From August 1718, in the highest decree, it was prescribed to have on each ship one hieromonk who was sent to the service from the Alexander Nevsky Monastery. During the battle, the priesthood monk was to be next to the ship's physician. The Church strictly followed that he was a person who performed not only worship, but was an example in all manifestations of life. Thus, during the reign of Peter I, the creation of an Orthodox maritime department was completed.

Years passed, and foreign experts from non-Orthodox faiths were invited to serve in the Russian Navy. Among them were dominated by navigators, commanders, boatswains, knights, healers. The Emperor and the Holy Synod wisely dealt with the problem of the religion of foreign officers who entered the Russian naval service. But at the same time, it was not possible to allow Orthodox Christians from the Russian fleet to convert to another religion.

A special tradition in the fleet was to take the oath, which was introduced from April 1710. Although the text of this oath was religious in nature, the idea of ​​loyalty to the Fatherland was laid in it. A clergy representative took the oath. For Orthodox, an Orthodox priest, for Muslims, an imam who was summoned from the fleet headquarters, for Jews, a rabbi, for Catholics, a pastor. In the absence of a clergyman, the oath was allowed to be taken by the commander.

Coastal Orthodox churches began to be built simultaneously with the creation of the Russian fleet. In St. Petersburg, on the left bank of the Moika River in the area of ​​the Blue Bridge downstream in 1730, admiralty ministers were stationed. It was the first shipyard. The blue bridge did not arise by chance, it connected the Kazan and 2 th Admiralty Islands. A chapel in the name of St. Nicholas the Wonderworker was built on this courtyard. After 12 years on the right bank of the Deaf River (this is the Griboyedov Canal today), a wooden church was built in the area of ​​Voznesensky Bridge. And in the year 1762 not far from this place was built St. Nicholas Naval Cathedral, which was consecrated in the name of St. Nicholas. In Kronstadt, where more than 10 thousands of naval employees were permanently located, the temples under construction were originally owned by the Maritime Office of Russia. The first temple - the Church of the Apostle Andrew Pervozvanny in the Kronstadt naval base - appeared already in 1718 year. Then in the sea fortress ship's carpenters put the Church of the Epiphany, which was located on the site indicated by Peter I. To build this temple, they bought the private house of the retired captain von Dezin. The creation of a stone church for sailors in Kronstadt was delayed for many years. The military governor of Kronstadt, Vice Admiral Kaznakov Nikolai Ivanovich, in 1896, submitted to the Maritime Ministry a proposal to build a stone Orthodox church in the fortress. In this proposal, the admiral reminded the minister, and with it the emperor, that the temple in Kronstadt - the cradle of the Russian fleet - should be not only a place of prayer, but also a national monument. This was followed by the intervention of Father John of Kronstadt in this process. He reproached the Russian government that there were funds in the country for the creation of Lutheran churches, and there were no funds for the creation of the Sea Temple. “We, the Russians, are ashamed to show foreigners a sea shrine, I mean the church (wooden Kronstadt church). Not from our frequent sea misfortunes? Are there any lessons from God? Lord How long will it be? ”Wrote John of Kronstadt. And in 1897, the highest permission was received to open a subscription to fundraising for the construction of the Marine Temple in Kronstadt. The city had a square where old anchors were kept. Architect Vasily Antonovich Kosyakov chose this place for the construction of a new church. He believed that the park should also be divided around the temple and there should be free territory for the procession. The special condition that was dictated from above prescribed that the height of the dome of the temple should be such that ships passing along the fairway could see the temple. The consecration of the new cathedral took place 10 June 1913 of the year.

In the north of the Russian Empire, the Solovetsky Monastery, created in 1420, in addition to the military defensive mission, also served as a temple for sailors.

On the Black Sea, the St. George Monastery, in addition to the main mission, served as the second school for training ship priests. The Cathedral of St. Equal-to-the-Apostles Prince Vladimir was the burial place of sailors.

In the Far East of the Russian Empire, many churches were created, which were located in the coastal cities with Christian names.

On ships, the most honorable and beloved place was considered the upper part of the deck from the mainmast to the mizzenmast. In this place were located the divine icons of the Mother of God and other saints. Icons were considered the most important shrine of the ship, so in the event of a crash, they were saved in the first place.