25 May 2013
10
During tests, the KSSch rocket sank a lot more warships than any other anti-ship missile in the world. 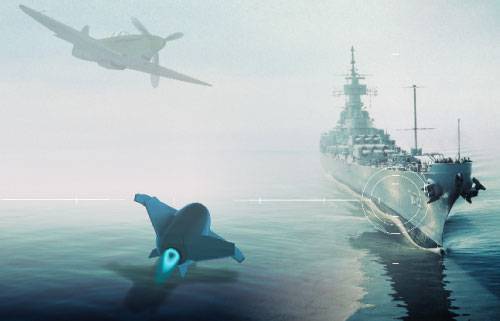 On a clear sunny day, September 9, 1943, the Italian squadron, on the orders of the new government, went from La Spezia to Malta to surrender to the Allies. Ahead - the strongest battleship of the Italian fleet "Roma" with a displacement of 46 thousand tons. Suddenly the signalman noticed subtle points - aircraft. The clock was 15 hours 33 minutes. Most likely, these are allied aircraft, thought on the battleship. But even if they are German, then from such a height it is possible to hit a ship with a bomb only by chance. But exactly eight minutes later a large bomb hit the deck of the battleship, which pierced the ship through, but fortunately the Italians exploded already in the water under the bottom. Ten minutes later, a second bomb broke through the deck and exploded inside the ship. The bow, 381 mm three-gun tower weighing 1400 tons, flew into the air, rotating. The battleship broke in half and disappeared under the water. Together with the ship, 1253 people were killed. The third bomb hit the battleship Italy, which miraculously managed to stay afloat.

How did the Germans manage to get into the Italian battleships from a height of 6 km? Italians experienced the effects of the world's first radio-controlled bombs, or, as the creators called them, aerial torpedoes. Even during the tests begun in May 1940, the Germans found out that the bomb dropped quickly began to lag behind the carrier aircraft and it became difficult for the bombardment operator to observe it. In this regard, it was decided to equip the planning bomb with an outboard liquid-jet engine. So there appeared the world's first guided anti-ship missiles Hs 293 and Hs 294. The most perfect and effective was Hs 294. Starting weight rocket Hs 294 - 2175 kg. The aerodynamic design of the rocket is normal aircraft. The height of the missile discharge is 5,4 km, the flight range is up to 14 km. The highlight of the rocket was that it did not get into the surface, but into the underwater part of the ship, which, as the experience of both world wars showed, was the most vulnerable.

Hs 294 was controlled so that approximately for 30-40 m to the target ship, the rocket entered at a small angle into the water and moved there horizontally at a shallow depth at a speed of 230-240 km / h. When the rocket touched the water, the wings, the back of the fuselage and the engines were separated, and the warhead (warhead) moved under water and hit the side of the enemy ship. 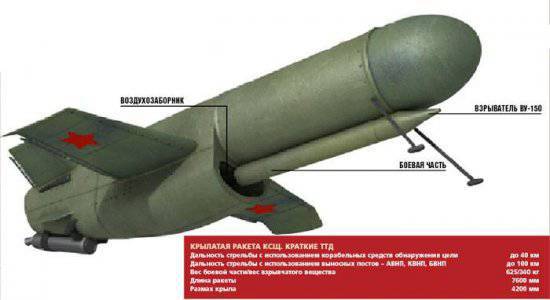 At the end of the war, several samples of the Hs 293 and Hs 294 became trophies of the Red Army. In 1947, KB2 of the Ministry of Agriculture took up their revision. No, this is not a typo, indeed, guided cruise missiles (then they were called missile planes) were in charge of the Minister of Agricultural Engineering. Based on Hs 293 and Hs 294, work on reactive aviation RAMT-1400 "Pike" marine dashboard. However, to bring the option of air-based "Pike" failed. Instead, in 1954, work began on the creation of the ship version of the "Pike", called the KSSh - the ship-based projectile "Pike", which was equipped with a homing radar. The firing range was determined by the capabilities of the radar of the carrier ship. GOS captured the target at a distance of 20-25 km, its search sector was 150 to the right and left.

Start KSSH was made using a powder accelerator, which, after testing 1,3 with dropped. The AM-5A aircraft turbojet engine with 2,0-2,6 tonnage was used as a cruise missile. This engine was used on the Yak-25 fighter jets, and it was intended to use engines that had developed a resource from aircraft.

The first sample of the Shchuka rocket wished to see Tupolev himself. He silently walked around the rocket for a long time, and then said: “This work is a little like a rocket. This is an aerodynamic freak. ” The designers lost their heads. Everyone was waiting for the master to say something else. And he said, “Yes. Freak. But it will fly! ”

The first launch of the KSSC at the Sandy Beam range near Theodosia took place on July 24 1956. The rocket was supposed to shoot at 15 km, but, rising to a height of 1180 m, it flew in a straight line at 60,15 km. In total, until the end of the year, seven more launches of the KSSC were conducted, of which four were considered satisfactory.

The first launch of the Pike from the “Bedovoy” took place on 2 in February of 1957 in the Feodosiya area near Cape Chowda. The first pancake came out lumpy: after the start, the KSSH got the height of 7580 m, the starting engine was still working, but the rocket had already begun to fall on the left wing. It became clear that the autopilot roll channel was not functioning. When the starter engine separated from the rocket, it began to collapse even more to the left, turned upside down and fell into the water 2,2 km from the ship on the 16 second flight. During the second launch of 15 in February 1957, the KSSH flew 53,5 km and fell into the sea. Targets, like the first start, was not. 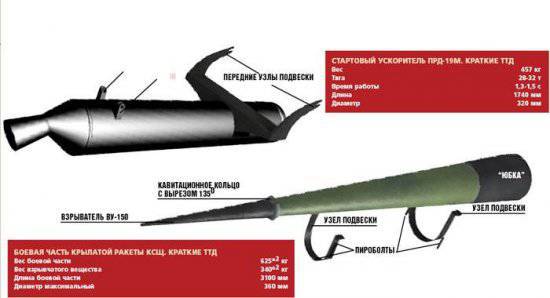 The launch accelerator PRD-19M and the combat unit of the cruise missile KSSCH. Brief TTD

In the future, the corps of the unfinished leader “Yerevan” and the German landing barge BSN-20 were used as targets. Both targets were equipped with corner reflectors raised above the deck on a special farm with a height of 6 m (both targets imitated by their reflectivity the American light cruiser of the Cleveland type), surface network along the entire length of the deck on masts 69,5 m and underwater network along the entire length 10 m targets

Total targets produced 20 starts. 30 August 1957, the KSSH got into the board of "Yerevan". Despite the fact that the warhead warhead was inert, a hole 2,0 x 2,2 m was formed in the board, and the leader quickly sank.

September 6 rocket was released on a radio-controlled boat, marching with 30-nodal speed at Cape Chauda. A direct hit was achieved, the boat broke into two parts and sank.

In early November, tests of missiles of the KSSH were transferred to the Balaklava area, where the citadel (central part) of the unfinished heavy cruiser “Stalingrad” was used as a target. Prior to that, artillery and torpedo firing were carried out in the Stalingrad compartment, and aviation practiced all types of bombing. During the shooting the team did not leave the target. It was believed that the armor "Stalingrad" (board - 230-260 mm, deck - 140-170 mm) reliably protect the crew. 27 December 1957 of the year the rocket, flying 23,75 km, hit the board of the "Stalingrad". As a result, a figure-eight hole appeared in the board, with a total area of ​​55 m 2.
October 29 1957 of the year during the launch of the 16-th rocket during the state tests there was a funny incident. The KSSC missile, instead of rushing along the guide, began to crawl slowly and after some seconds fell overboard. No one noticed that the rocket jumped into the sea without a starting engine.

From the stupor of all brought the heart-rending cry of the watchman signalman: "Polundra! A bomb is falling on the ship! ”The heads of all rallied upwards. Indeed, the ship fell ... but not a bomb, but a starting engine. It seemed that he was about to crash into a destroyer. People rushed to hide. Fortunately, everything worked out: the starting engine, revolving strongly around its longitudinal axis, fell into the sea in 35 m from the nasal cheekbone of “Poor”.

Curious shooting in 1961, the destroyer "Wrathful" on the destroyer "Boky" - the first target ship, which retained all the superstructure, artillery installations and torpedo tubes. At the same time, “Boyky” was not put on the barrels and constantly changed its position from the drift.

At the time of launch, the rocket and the target were in the same diametral plane. The rocket hit the target in the joint of the deck and side, at the base of the rack of the stern flag. The result was a ricochet, and the rocket went along the median plane of the ship above the deck, sweeping away everything in its path. At first they were stern gun turrets, then superstructures with a rangefinder station located on them, then stern torpedo tubes. Everything was swept overboard, right up to the forecastle.

Next, the rocket entered along the forecastle, cutting it like a can opener, and got stuck in the area of ​​the nose 130-millimeter cannon. In this case, the dockmaster fell on one side, and the bridge with the control tower and another 130-millimeter cannon - on the other. If the flight of the rocket had not been filmed on a film, no one would have believed that this could be done with the ship with one rocket, and even with an inert warhead.

The shooting of the Admiral Nakhimov cruiser in June 1961 was no less spectacular. Firing from a distance of 68 km led rocket ship "Perspicacious". The rocket hit the board of the cruiser and formed a hole in the form of an inverted eight, with an area of ​​about 15 m 2. Most of the hole was made marching engine, and the smaller - warhead inert equipment. This hole alone was not enough. The rocket pierced the cruiser from side to side and left the starboard side of the cruiser just below the foremast. The exit hole was an almost circular hole with an area of ​​about 8 м2, while the bottom hole cut turned out to be 30-35 cm below the waterline, and while the rescue service reached the cruiser, he managed to take about 1600 t of outboard water. In addition, the cruiser spilled kerosene residues from the tanks of the rocket, and this caused a fire that extinguished about 12 hours. The cruiser prepared for decommissioning did not have anything wooden on board, but the fire was literally raging - iron was burning, although it is difficult to imagine.

For the life of the cruiser fought the entire Black Sea Fleet. With great difficulty, "Admiral Nakhimov" was saved and assigned to Sevastopol.

The latest launches of the KSSH missiles took place in 1971, in the Kerch area, from the Elusive rocket ship. The ship fired five missiles that were supposed to be intercepted by the newest “Storm” air defense system. The KSSH missiles flew at an altitude of about 60 m, and none of them was shot down.

Ctrl Enter
Noticed a mistake Highlight text and press. Ctrl + Enter
We are
Crime and Punishment. French battleship "Jean Bar"16-I Red Banner Squadron of submarines
10 comments
Information
Dear reader, to leave comments on the publication, you must to register.