December 21 2013
56
September 26, 1944 the main command of the Wehrmacht ground forces decided to increase the production of fighters tanks Jagdpanzer 38 Hetzer. The car had good combat characteristics, and, most importantly, it was cheaper than German-made tanks and self-propelled guns. And by this time, the Reich industry was in short supply of materials, machine tools, equipment and experienced personnel necessary for the production of tanks. Strong bombing of industrial enterprises also contributed to this. aviation allies. As a result, the production of armored vehicles began to fall, and losses at the fronts increased.


Since the factories of the Skoda and VMM companies, where the production of “Hetzer” was carried out, could not cope with the program launched by them, they decided to attract Alkett to the production of these machines. The last was commissioned to reach the level of production by the end of the year, 1000 Jagdpanzer 38 per month.

However, a few days later, the situation changed - as mentioned above, the Tank Development Commission decided to reduce the number of tank chassis produced: only Hetzer, Panther and Royal Tiger and vehicles based on them remained in production.

October 19 1944 Tank Armaments Test Division (WaPruf 6), after reviewing the materials transferred to it, reported that the Jagdpanzer 38 tank destroyer was poorly adapted for mass production at German enterprises in terms of production.

As a result, in a short time, the engineers of VMM and Alkett reworked the Hetzer design, adapting it for mass production and making a number of changes to the design. The Ausfuehrung “Reich”, as this car was originally named, received a new, somewhat widened and elongated armored case with vertical sheets in the lower part (they were mounted with the Hetzer inward). As a power plant, the use of a Tatra diesel engine rated at 220 l was used. with. with a five-speed gearbox, AK 5 — 80, as well as new enhanced side gears, steering and suspension. The general management of the development of this machine was carried out by the chief engineer of Alkett Michels.

20 November 1944 was recorded in the magazine of the Artillery Inspector-General of the Ground Forces Command that the development of the chassis of the new self-propelled unit, called Jagdpanzer 38 D (D - Deutschland), was completed, and in the near future the detailed development of the cutting and installation of weapons would begin. 23 January 1945, introducing the project Jagdpanzer 38 D at a meeting of the "Commission for the Development of Tanks" engineer Michels reported the following details.

Use on the new chassis of the Tatra V-12 diesel engine of air cooling with 220 horsepower at 2000 rpm, allowed to increase the mobility of the machine and raise its speed compared to the "Hetzer". In addition, diesel, which was more economical than gasoline engines, provided a much longer power reserve — with fuel consumption of 76 liters per 100 kilometers of fuel tank capacity in 390 liters, it should be enough for 500 kilometers when driving on highways and 300 kilometers on rough terrain.

The design of the hull and chassis allowed, without any changes in the future, to replace the 350-mm tracks, which were used in the project, with new ones broadened to 460 mm.

The estimated mass of the machine, which had frontal armor in 60 mm and armed with 75-mm cannon 39 Cancer L / 48 with ammunition in 62 shot, was 16,7 tons. In addition, the company Alkett designed for suspension Jagdpanzer 38 D new reinforced vertical coil springs, which were supposed to be used in the future instead of horizontal springs. This measure, which did not require major changes in the design of the machine, made it possible to increase its mass to 20 tons. In conclusion, the engineer Michels said that the Jagdpanzer 38 D project "is the best for mass production."

Michels also said that in addition to the tank destroyer based on the Jagdpanzer 38 D, a whole family of combat vehicles is being designed:
- reconnaissance tank with 20-mm cannon in the turret;
- reconnaissance tank with an X / NUMX-mm L / 75 cannon in the open wheelhouse;
- machine with the installation of 120-mm mortar;
- Armored personnel carrier for the transport of infantry;
- repair and evacuation tank Bergepanzer 38D;
- anti-aircraft tank with two 30-mm guns in the installation Kugelbliz. 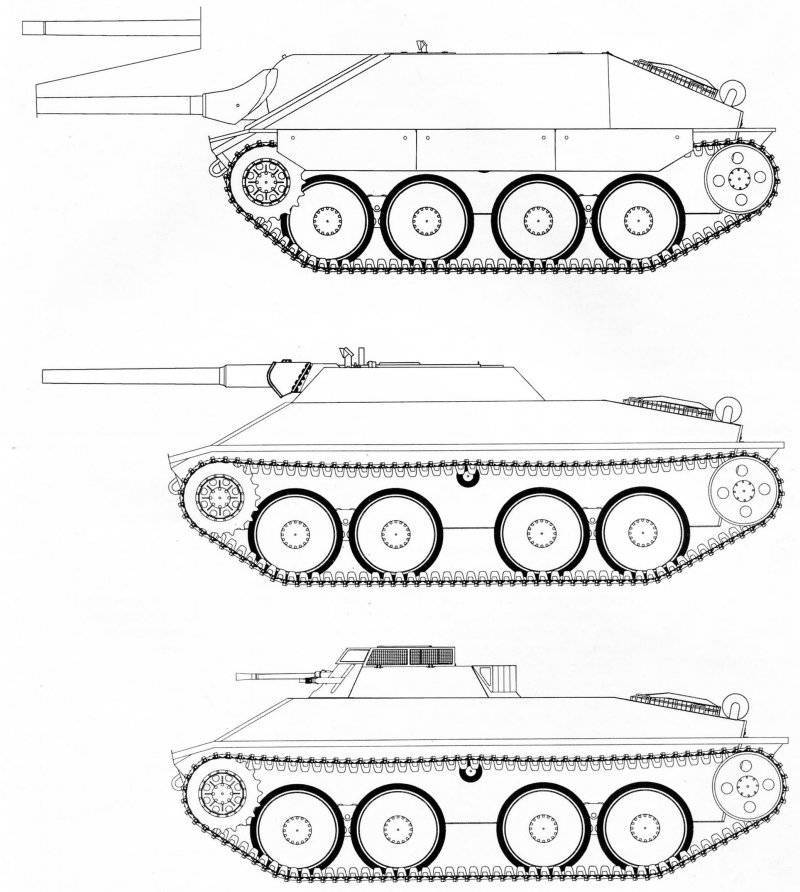 Some sources mention a design on the Jagdpanzer 38 D chassis of a tank with an 75-mm cannon in the Pz.IV turret, but nothing is said in the minutes of the meeting of the “commission for the development of tanks”. In addition to the above options, the document mentions only that two more versions of machines based on the Jagdpanzer 38 D are being developed, but “no additional information was provided on them”.

For the manufacture of the above military vehicles based on the Jagdpanzer 38 D was supposed to use a slightly longer body of the self-propelled gun with a decrease in the thickness of the frontal hull plate to 30 mm. Considering that the mass was reduced compared to the base tank destroyer, the Tatra 103 V-12 diesel engine with 207 L power should have been used for installation on the extended chassis. with. at 2250 rpm, but with the same AK 5-80 gearbox. It was assumed that the speed of reconnaissance tanks will be approximately 52 km / h.

According to the general inspector of tank forces, of the above-mentioned machines, first of all it was necessary to begin production of reconnaissance tanks, moreover in the ratio of 1 to 1. This was argued by the fact that using an open turret with an 20-mm cannon will allow better observation of the battlefield, and vehicles with 75-mm cannons can cover reconnaissance by fire. In addition, the inspector general suggested that the option of installing a MG 20-mm MG 151 cannon on a reconnaissance tank should be considered, if this can be done without major chassis alterations. However, the primary task remained the organization of mass production of the tank destroyer Jagdpanzer 38 D. It was only after this that it was possible to talk about organizing the production of vehicles based on it.

Already in January 1945, the company Alkett signed a contract for the manufacture of two prototypes Jagdpanzer 38 D. At the same time, the firm had to deliver the first five production machines in March, and by December 1945 had to reach the release of self-propelled 800 vehicles a month. Vomag was supposed to collect the first Jagdpanzer 38 D sample for July 5, and by December produce monthly 300 units. Following Vomag, M1AG was connected to the manufacture of a new tank destroyer. In February, some adjustments were made to 1945, and the Jagdpanzer 38 D release schedule for the coming months was as follows: May - 10 machines, June - 50, July - 80 and August - 120.

14 March 1945, the inspector general of tank forces said that from July it was necessary to switch to production of the Jagdpanzer 38 D with 75-mm Cannon 42 L / 70 cancer (50 rounds of ammunition) and with frontal armor reduced to 50 mm. In the future, it was planned to switch to the installation of this tool in self-propelled guns without recoil devices (Jagdpanzer 38 D Starr). The first such machines were supposed to leave the factory floor in June 1945 of the year. It was planned that the first two samples of the Jagdpanzer 38 D Starr with 75-mm tools Cancer 42 L / 70, will be assembled by 20 on April 1945 and demonstrated to Hitler.

23 March 1945 representatives from Zahnradfabrik in Friedrichshafen (she was engaged in the manufacture of gearboxes for tanks) reported to the Army Arms Administration that according to information received from Alkett, the assembly of the first two Jagdpanzer 38 D is delayed due to the lack of gearboxes. Upon receipt of the latter, the machines could be completed within eight days.

And since the first samples of the Jagdpanzer 38 D were supposed to be sent to the 15 April 1945 leadership for the year, the 5 April transmissions were loaded onto trucks and sent to Berlin.

No data on whether the two prototypes of the Jagdpanzer 38 D were completed and what their fate would be could be found. No information was obtained from the representatives of Alkett, questioned after the war by representatives of the Anglo-American command. German engineers reported only that most of the company’s documents burned down during the bombing.