March 18 2011
0
In recent years, relations between the Republic of China in Taiwan and mainland communist China have become warmer. But despite this, military-political circles in Taiwan do not at all exclude the threat of a landing of an amphibious assault force on the island, as one of the possible types of invasion by the Chinese army. The fact that China will ever want to regain control of the “rebel island” is not a topic for Taiwan that can be removed from the agenda.

The same is proved by the details published shortly after the New Year holidays about the Taiwan program for developing a new multi-caliber multiple launch rocket launcher (multiple launch rocket launcher) known as RT-2000. This MLRS is designed to counter the possible landing operation of the People's Liberation Army of China (PLA), the destruction of transports and ships of the Chinese fleet still on the approach to the Taiwan coast, as well as the defeat of people and enemy equipment at the time of their landing on land.

The full designation of the new Taiwanese MLRS RT-2000 is “Ray Ting 2000” (translated as “thunder”). The serial production of the MLRS "Thunder" was adjusted to the enterprises of the Republic of China last year. Here are just a wave of materials in the media, who reported on the high combat potential of the installation and listed its combat characteristics, forgot about one interesting fact. The adoption of the MLRS "Thunder" has lagged behind the scheduled schedule for almost 5 years, and the development of the MLRS has faced a number of technical problems, some of which have not been solved so far. So far, the Ministry of Defense of the Republic of China has made an order for approximately 50 military installations and the same transport-charging vehicles. 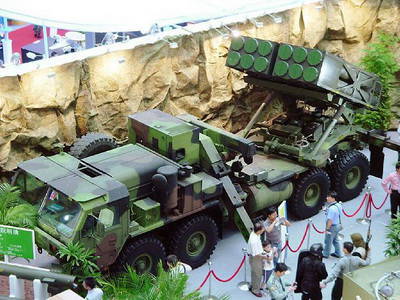 MLRS RT-2000
According to the existing plans of the Taiwanese command, the new salvo fire system should go into service with all three army groups on the island. Each group will receive at least one artillery battalion of these systems. The battalion will include 3 batteries of the RSZO RT-2000 batteries, each with 6 combat vehicles.

The developer of the complex was the Chanshan Science and Technology Institute owned by the Ministry of Defense of the Kyrgyz Republic, which is the leading scientific and technical organization of the military-industrial complex of Taiwan. The institute established in 1969 (located in the city of Longtana) developed and sent to mass production practically all of the country's adopted missile systems, ground-based and sea-based radar stations, as well as the MLRS systems of the KF-3 / 4 and KF types already in service. -6 126 caliber and 117 mm. Currently, the institute is actively involved in Taiwan’s rocket and space program.

The institute began to actively develop a new multiple launch rocket system in 1996 year. Taiwanese engineers decided to create it on the basis of the wheel chassis of the heavy army truck M977 HEMTT, having the wheel formula 8х8, this truck is made by the Turkish company Oshkosh Truck Corporation. It was on their chassis that the prototype of the RSZO RT-2000 was made, which was already on display at 1997 at weapon shows. Later, information appeared that a MAN HX81 wheeled truck with the same wheel formula could be chosen as the chassis. If we talk about the concept, then, developing the installation, Taiwanese engineers were inspired by the well-known American MLRS M270, which the Taiwan Ministry of Defense at the beginning even planned to buy in the States, but later refused, giving preference to the domestic manufacturer.

MLRS "Thunder" is a multi-caliber system that is technically provided by the possible installation of various packages of guides. So, it can be an 2 20 15 X-mm caliber package, or an 117 2 9 mm 30 180 package, or an MNXX 2 6 X-package of Mk45 230 mm. The firing range for these variants of rockets is encrypted in their name and is 15, 30 and 45 kilometers, respectively. Larger caliber rockets are supposed to be used to destroy PLA ships and amphibious assault forces still at sea, while 117 mm rockets are supposed to be used by the enemy troops already landing on the Taiwanese coast. Naturally, a larger caliber can be used not only to defeat a landing force even at sea, but also on the coast, from a long range, in the case when it is not possible to quickly get to the area in which the enemy will begin to carry out the landing operation.

The crew of the MLRS "Thunder" is 5 people, combat weight - 13 700 kg, speed on the highway to 60 km / h, cruising range on the highway almost 500 km. RT-2000 is equipped with a fire control system that uses satellite navigation signals and allows you to automatically determine the coordinates and altitude of the installation location. 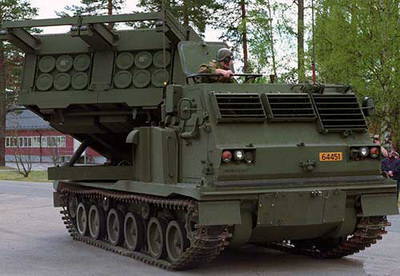 American MLRS M270
The composition of the RSZO-2000 combat vehicles includes missiles that can have high-explosive fragmentation warheads with pre-prepared attacking elements (steel balls of different diameters and quantities — depending on the caliber of the projectile), as well as anti-personnel or other submunitions. So, for example, the 117 mm missile Mk15 can be equipped with a 6400 warhead with steel balls with a diameter of 6,4 mm. carry anti-personnel stuffing in the form of 30 267 steel balls with a diameter of 77 mm. The most powerful 18 mm missile Mk300 capable of carrying up to 8 submunitions M230 DPICM or 45 518 steel balls with a diameter of 77 mm. Currently, in the Republic of China, work is underway to create new types of ammunition that can be used in the MLRS "Thunder"

The first public demonstration of the fighting qualities of the “Thunder” was the “demonstration” exercises of the Taiwanese ground forces, which took place in April 2001 on the west coast of the island. Then, in the course of the firing of combat rockets, the target was successfully hit - a ship previously withdrawn from the fleet of the republic. However, as early as next year, in the course of the shooting of the developers, the MLRS suffered a failure. What happened then is not known for certain, but in some sources information flashed that the incident was a “very unpleasant surprise.” The year was spent on eliminating the identified deficiencies, but during the test shooting in 2003, the MLRS suffered a failure again, and several unexploded submunitions were caught by local fishermen not far from the landfill where they were fired.

To date, all the comments that were identified during the military tests have been eliminated, and, according to the developer, the MLRS RT-2000 is ready for serial production. Moreover, the Taiwanese gunsmiths have already entered the international market with their system, in particular, according to the American weekly Defense News, the advertising and information campaign of the new salvo fire system was held at the exhibition in Abu Dhabi in 2003 year. True, the conclusion of contracts or at least the interest of foreign countries is not yet known. At the same time, the multi-caliber MLRS itself can be quite attractive and in demand on the market, although it has a significant drawback - the low enough range of 117 and 180 mm ammunition.

For comparison, we give the characteristics of domestic MLRS supplied for export. Thus, Grad MLRS have a similar caliber in 122 mm (package of 40 guides) and 220 mm. MLRS "Hurricane" (16 guides) have a firing range of 20-40 and 35 km, respectively. The American MLRS M270, on which Taiwanese developers were equal, has a 227 mm firing range with missiles from 32 to 60 km, depending on the type of ammunition. Naturally, it is not worth mentioning the Russian large-caliber MLRS Smerch, which is capable of hitting targets at a distance of 70-90 km. So while the domestic defense industry should not be afraid of Taiwanese gunsmiths, most likely the producers of the Taiwanese “Thunder” was more important to fulfill the order of their own Defense Ministry than to plan competition in the world market.