American drone X-37B has been in orbit for over a year.

December 19 2013
69
The mysterious American spacecraft (we are talking about the X-37B spaceless unmanned spacecraft) has been in a near-earth orbit for a year now, performing various tasks related, apparently, to long-term, but unknown space targets. This is the third long flight of the device in earth orbit. The last time X-37B traveled to space 11 in December 2012, it was launched from the launch site at Cape Canaveral as part of the OTV-3 mission (Orbital Test Vehicle 3). The general objectives of the mission, as well as information about the cargo on board the spacecraft, are strictly classified.


Prior to this, X-37B devices have already managed to go into space 2 times - as part of the OTV-1 mission, which was launched in the 2010 year (it lasted 225 days), and as part of the OTV-2 mission, in which the second device already tested X-37B. This mission was the longest, the spacecraft was in orbit 468 days, he managed to fly around the earth more than 7 thousands of times. After the assignment was completed, both vehicles landed successfully at the US Air Force Base in Vandenberg, California.

Work on the creation of the X-37 spacecraft began at 1999 after NASA signed a contract with the Boeing company. The total amount of the contract was 173 million. Since 2004, the US Air Force has been leading the project to build an experimental orbital plane. The X-37B was created by Boeing Defense Space and Security with the participation of NASA's X-37 research laboratories, X-37 of the United States Department of Defense Advanced Research Programs (DARPA) and the United States Air Force X-40. The entire process of designing, producing and testing the systems of the new orbiter was carried out at the Boeing facilities located in California. 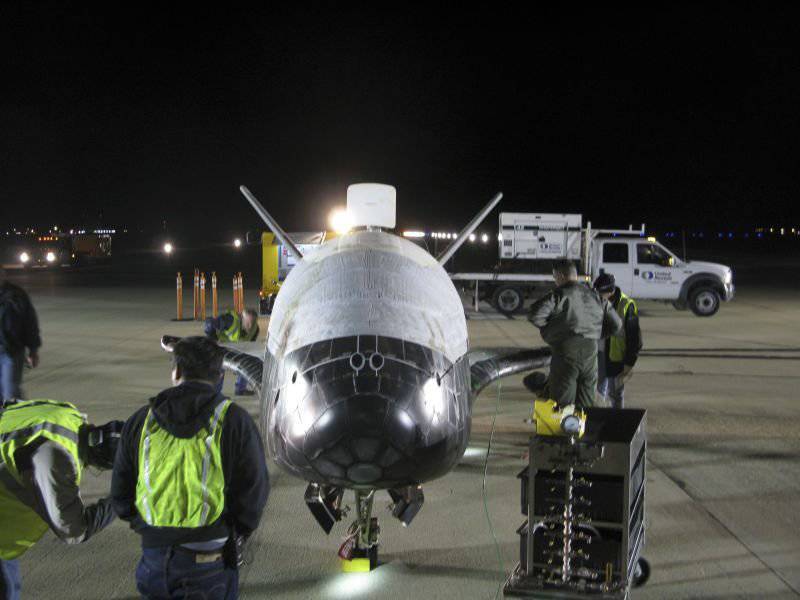 The X-37B experimental orbital plane is designed to perform a variety of tasks in Earth orbit at altitudes from 110 to 500 miles at speeds up to 17 500 miles / hour. The mass of the device is about 4995 kg, length - 9 m, height - 2,85 m, wingspan about 4,5 m. Each aircraft is equipped with a cargo compartment measuring approximately 2 per 0,6 meter. According to the creators, the X-37B design incorporates the best qualities of a spacecraft and a traditional aircraft, which allows the device to be used flexibly enough to solve various tasks. The launch of the spacecraft into space is carried out in a vertical mode with the help of a launch vehicle, but it lands on its own completely in an automatic mode in an aircraft mode (the same principle as for shuttles). Both X-37B spacecraft were built for the US Air Force by Boeing Government Space Systems.

According to Boeing, both aircraft are based on lightweight composite structures, which have replaced the now traditional aluminum. To protect the wings of the apparatus on an orbital plane, a high-temperature hot-melt of a new generation is used, which is different from the carbon tile used on the American space shuttles. Also, Boeing experts note that the entire avionics of the spacecraft was designed to automate the descent and landing apparatus. On top of that, there is no hydraulics on board the X-37B, all of its flight control and deceleration systems are based on electromechanical drives.

Today, no one knows how long the current mission in orbit will last; officially this information has not been announced anywhere, it is also not clear where the device will land at this time. Currently, the US Air Force is considering a variant with the descent and landing of the vehicle on the landing strip of space shuttles, which is located on the territory of the Kennedy Space Center NASA near Cape Canaveral. It was from here, just over a year ago, that the ship was launched into space. The infrastructure remaining after shutting down the shuttle program can be used, which will reduce the cost of the entire project, US officials say. 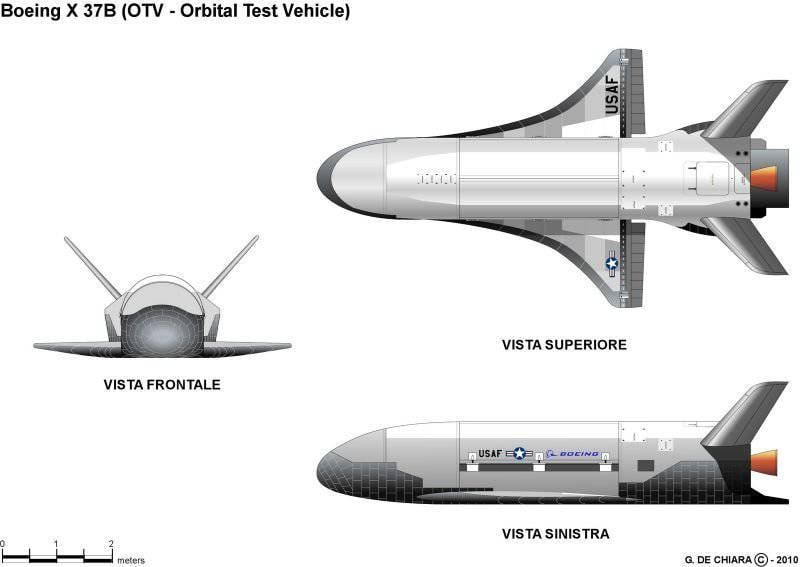 Currently, the longest flight of the orbital plane X-37B into space remains a flight within the framework of the OTV-2 project. The device started 5 March 2011 of the year from the launch site, located in Florida at Cape Canaveral. He was put into orbit by the Atlas-5 / 501 rocket. As a result, the unit spent in flight 468 days and 13 hours, landing at Vandenberg airbase in California. The flight was carried out as part of the continuation of the test program, which launched 22 on April 2010, along with the launch into orbit of the first X-37B (OTV-1), the first flight continued for 225 days.

It should be noted that X-37B was the first in stories US spacecraft, which returned to Earth and landed completely independently in unmanned mode. According to the Boeing company, this aircraft clearly showed that unmanned spacecraft are able to go into orbit and return home safely. Within the framework of the second super-long flight into space, the creators of the spacecraft tested in detail the strength characteristics of the X-37B design, and also tested its additional functions and capabilities.

At the same time, the leaders of the US Air Force shy away from interviews and direct answers to the question of exactly what tasks are facing the orbiting X-37B spacecraft. All their comments are reduced to the words about the need to collect data on the characteristics and capabilities of the aircraft. According to the manufacturer, the spacecraft is used to demonstrate the safety and reliability of using reusable unmanned spacecraft in orbit for solving tasks assigned to the country's air force. 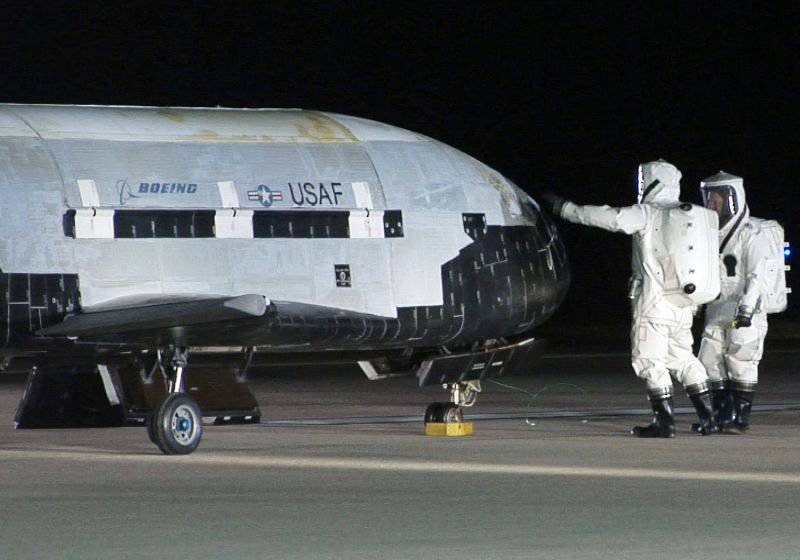 It is not surprising that some skeptics, as well as a number of experts, including Russia, believe that the US is testing another space interceptor, which, if necessary, will be able to disable the satellites of a potential enemy, and some even speak about its possibility of rocket-bombing strikes from Earth's orbit.

This is not surprising, since the United States Air Force is silent and does not disclose the purpose of using the X-37B orbital plane. At the same time, the official version assumes that the device can be used to deliver various cargoes into orbit, this is what is called its main function. At the same time, there is information that the spacecraft can be used for reconnaissance purposes. According to the Russian historian A. B. Shirokorad, both of these assumptions are untenable because of their economic inexpediency. In his opinion, the most plausible is the version that the US military uses this device for testing and running in technologies for its future space interceptor, which, if necessary, will allow destroying space objects of other countries, including kinetic effects. This designation of this spacecraft can fit into the document entitled “US National Space Policy” dated 2006. This document, in fact, proclaimed Washington’s right to partially extend its national sovereignty to outer space.

Ctrl Enter
Noticed a mistake Highlight text and press. Ctrl + Enter
We are
X-37B secret cosmic drones have found a home in the Kennedy Space CenterSpaceport world. Part 1
69 comments
Information
Dear reader, to leave comments on the publication, you must to register.