December 18 2013
33
The Airbus A400M is a modern, four-engined turboprop military transport aircraft manufactured by Airbus Military. It is assumed that there will also be a civilian version of the machine. The first copy of the A400M was shown in Seville 26 June 2008. The first flight of the aircraft took place on December 11 2009. The company plans to release 30 aircraft per year. The first serial military transport aircraft Airbus A400M should be transferred to the French Air Force.


In total, as of March 2013, 174 of this type of aircraft was ordered. Of these, the 53 aircraft is intended for the German Air Force, the French Air Force - 50 machines, for Spain - 27 and the United Kingdom - 22. In addition, the aircraft was ordered for the needs of the Air Forces of Belgium, Turkey, Luxembourg and Malaysia. The press also appeared information about the interest in the aircraft of the Kazakh military, who wanted to buy 2 aircraft. Initially, the number of ordered cars exceeded 200, but then Italy withdrew from this project, and the number of aircraft ordered decreased.

The agreement to develop a single European military transport aircraft was signed more than 30 years ago - back in 1982, however, due to disagreements between participating countries and manufacturing companies, the project was temporarily postponed. In 2003, Belgium, Great Britain, Germany, Spain, Italy, Luxembourg, Turkey and France signed a joint agreement to acquire A212M military transport aircraft from EADS 400. 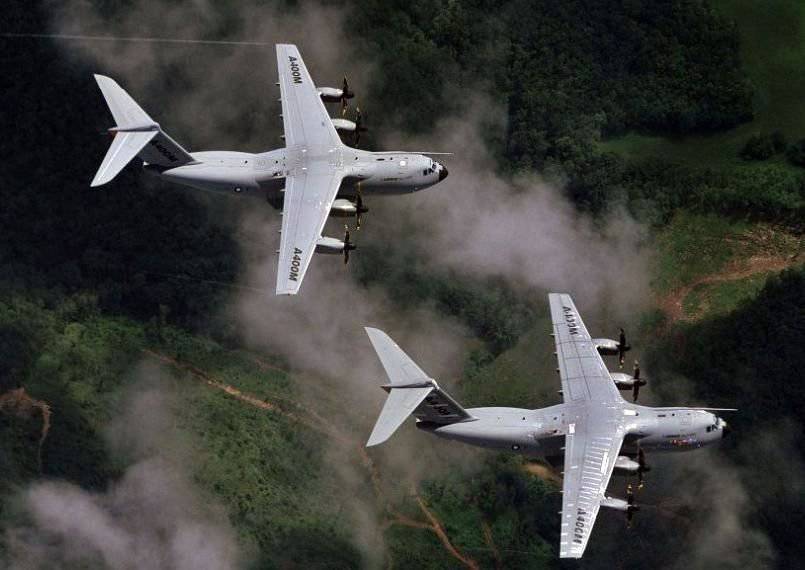 The cost of implementing the project of creating a new military transport aircraft in life amounted to 20 billion euros. At the same time, the concern requested from 7 European purchasing countries additional 5 billion euros for the completion of A400M. The first flight of the aircraft was scheduled for January 2008 of the year, and it was planned to put the aircraft into operation in the 2009 year. However, the date of the first flight was originally postponed to July, and then to September 2008. Already in September, representatives of the developer’s company announced the delay in the first flight of the car for an indefinite period, until the engines were fully developed. As a result, the car rose into the air very late - at the very end of 2009 of the year.

In 2013, the first production aircraft began to enter service with the French Air Force. Aircraft deliveries began in the 3 quarter of the year. Interestingly, Airbus Military, together with other project participants - Flabel (Belgium) and Turkish Aerospace Industries (Turkey) - concluded that in the era of limiting military budgets and other expenses, any military aircraft must perform several different tasks at once. In addition to its main transport function, a new European aircraft was created from the very beginning as an air tanker. Thus, it will not only be able to replace the C-2013 military transport aircraft, but also be able to carry out aerial refueling of other aircraft even more efficiently. 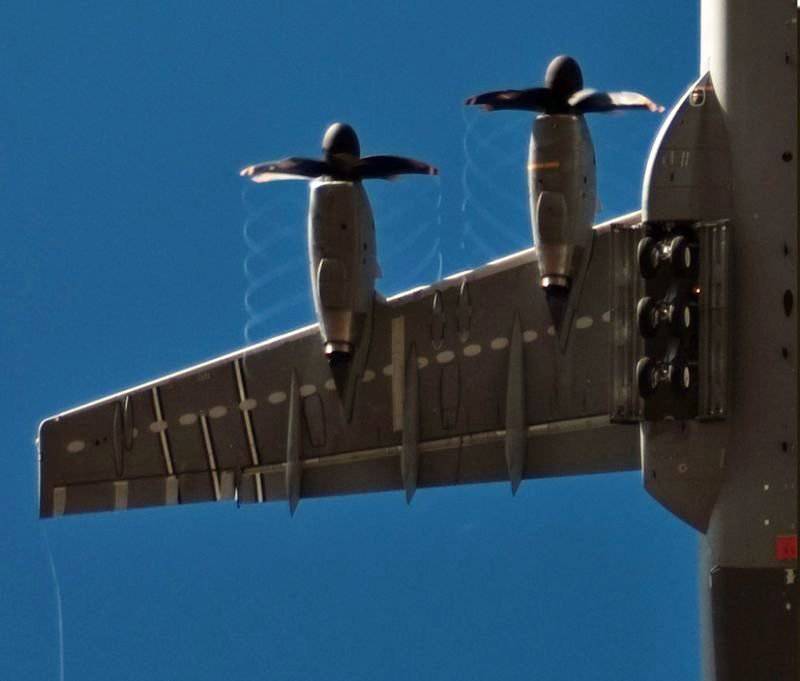 Mainly, the Airbus A400M wide-body military transport aircraft (MTC) is intended to replace the outdated C-130 and C-160 aircraft of the first modifications in Europe - members of the NATO military bloc. The aircraft is being created under the FLA (Future Large Aircraft) program in broad European cooperation. As conceived by the creators, the new aircraft must provide for the transfer of troops and various cargoes, their landing by landing or parachute method at any time of the day, in any weather conditions. The aircraft can also be used with unprepared runways, even unpaved. The plane was supposed to fly at a sufficiently high subsonic speed, including in the group and at low altitudes. Provides for the reservation of the cockpit and all vital aircraft systems. As a means of protection, the installation of EW system containers on 4 is provided for the wing pylons, and the pylons can also be used to install special suspended devices on them for refueling aircraft in the air.

According to developers, the Airbus A400M PTS should have a service life of at least 30 years, and the operating temperature range extends from + 50 to –50 degrees Celsius. All systems and systems of the onboard radio-electronic equipment (avionics) of the aircraft must be combined with a multiplex data distribution bus (1553 B standard). The new military transport aircraft is a wide-body monoplane with a high-wing, tail-shaped, T-shaped tail and a cargo ramp located at the rear of the vehicle’s fuselage. In the design of the aircraft are widely used modern composite materials and various units and units of modular type. 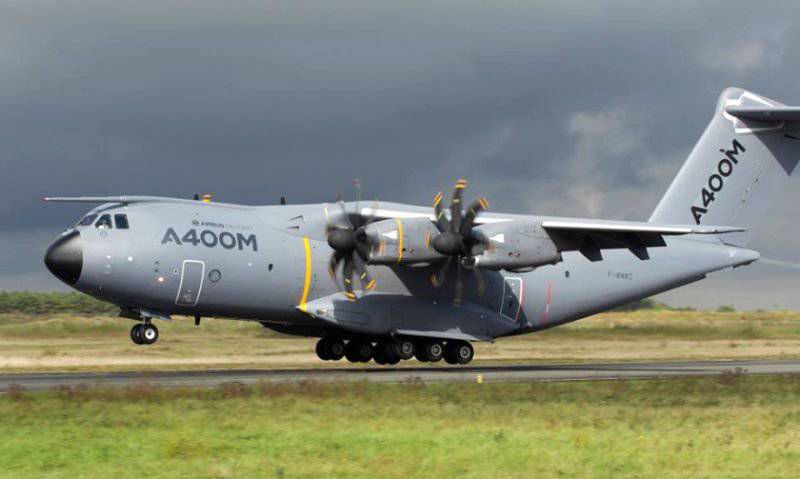 The structure of the power plant of the aircraft was planned to include a 4 turboprop engine with a capacity of at least 13 thousand hp. each. The main role was considered a variant of a promising aircraft engine TP400-D1 M88, which is a joint development of MTU (Germany), SNECMA (France), ITP (Spain) and Fiat Avia (Italy). The engine was created on the basis of the gas generator of the МХNUMX double-circuit turbojet engine, which is used on modern French tactical fighters "Rafale". At the beginning of 88, the companies participating in the project agreed to create a new enterprise - TIP (Turboprop International), whose main task was the development, bringing to mind and mass production of TP2000-D400 M1 engines. Subsequently, as the main engine was selected TP88-D400, with a capacity of 6 thousand hp The use of these engines allows you to achieve the specified tactical and technical characteristics of the machine.

The planned composition of the Airbus A400M avionics will consist of a modern radar, high-precision navigation system and promising means of displaying information in the cockpit ("glass cockpit"). It is planned to install information display equipment on the cockpit windshield, as well as various multifunctional color indicators. It is also planned to have a built-in control system, which, according to the aircraft makers, will be able to significantly reduce the load on the crew of the vehicle and reduce it all to 2-s. 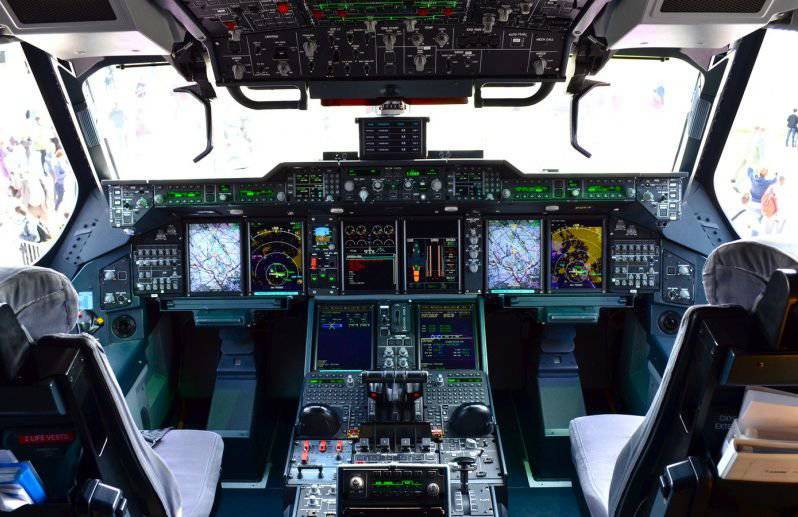 The volume of the cargo compartment of the ATS of the A400M will be on the order of 340 м3, which is almost two times more than the aircraft of similar purpose used in Europe. Such dimensions will allow all the main types of weapons and military equipment to be placed in the cargo compartment without preliminary disassembly, including A.129, AN-64, Tiger, HNH-90 helicopters, artillery, including 203-mm howitzer M110A, armored personnel carriers and multiple rocket launchers. The maximum carrying capacity of the aircraft is 37 tons.

According to the calculations of the creators of the new military-technical cooperation, the promising vehicle will have improved performance and high combat effectiveness in comparison with the currently existing tactical military transport planes. Thanks to an improved chassis design and its take-off and landing characteristics, the new aircraft will be able to take off / land even from unprepared ground sites up to 900 meters in length, as well as perform maneuvers with a small turning radius. Also on the basis of А-400М it is planned to develop a version of a transport-refueling aircraft with several filling points. The developers believe that, having onboard up to 41 tons of fuel delivered, the aircraft will be able to patrol for 3 hours at a distance of about 900 km from the airfield of its home base. 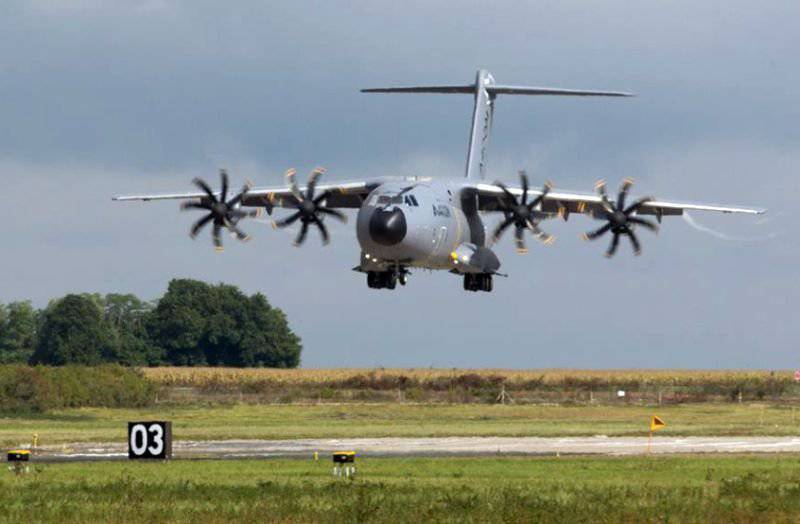 26 June 2008 of the year in the small town of San Pablo, located not far from Seville, in Spain, at the CASA aircraft factory, which is part of EADS, the rollout ceremony of the first prototype of the MTC Airbus A400M was held. The components of the aircraft are made in Germany, Britain, France, Turkey, South Africa, and the final assembly is made in Spain. In the future, EADS will build about 400 aircraft of this type. The solemn event on the occasion of the first assembled aircraft was attended by Spanish King Juan Carlos I. 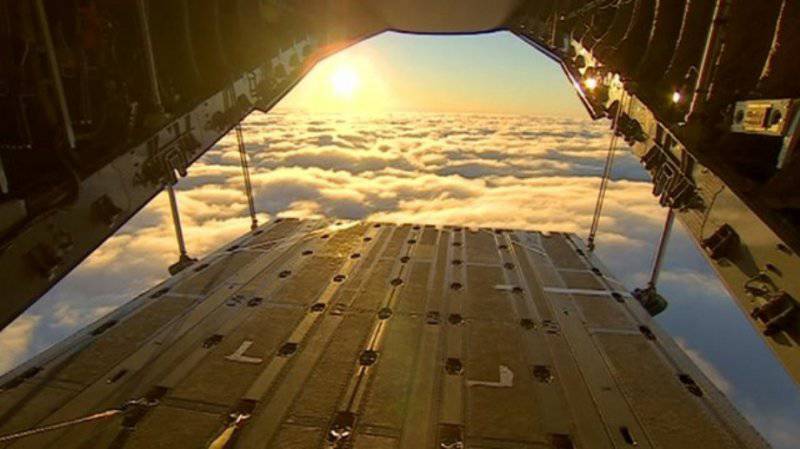 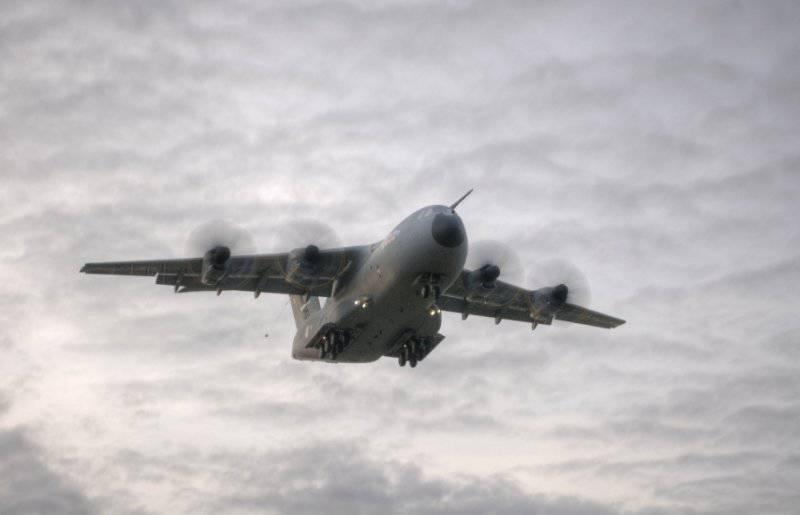 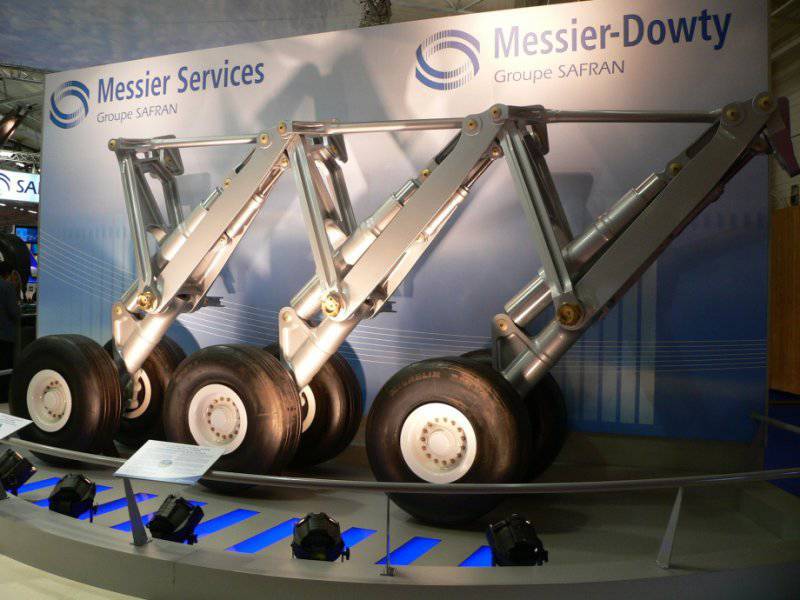 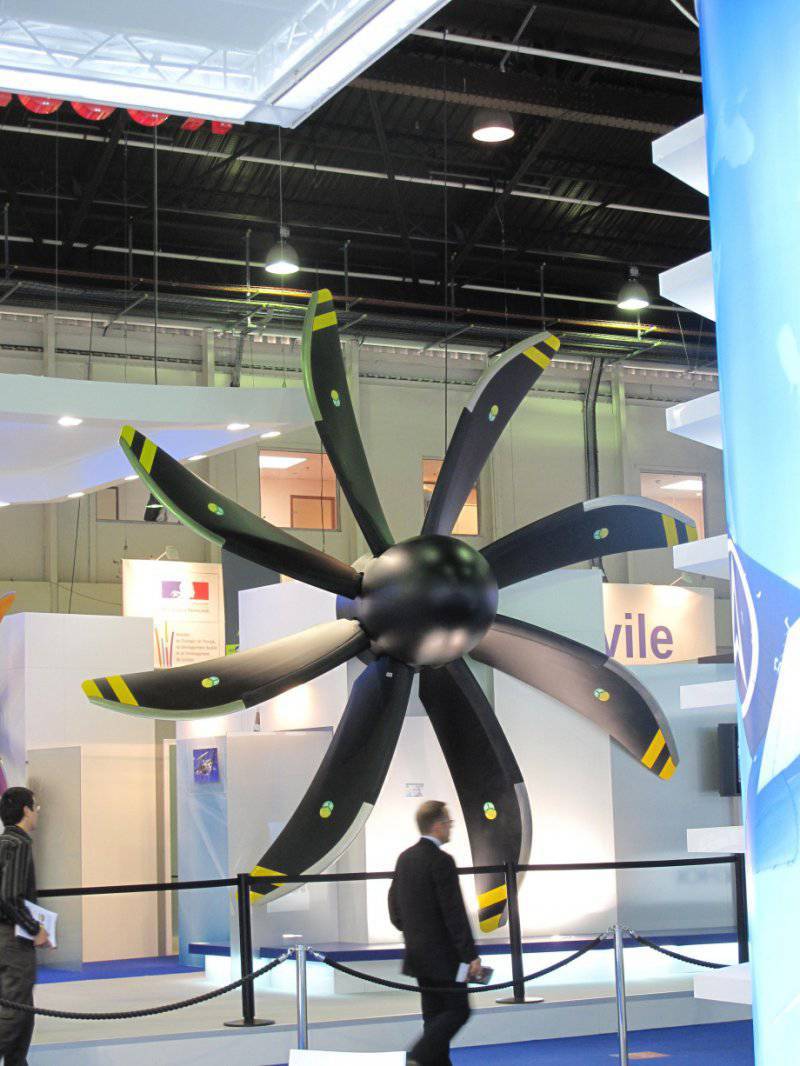 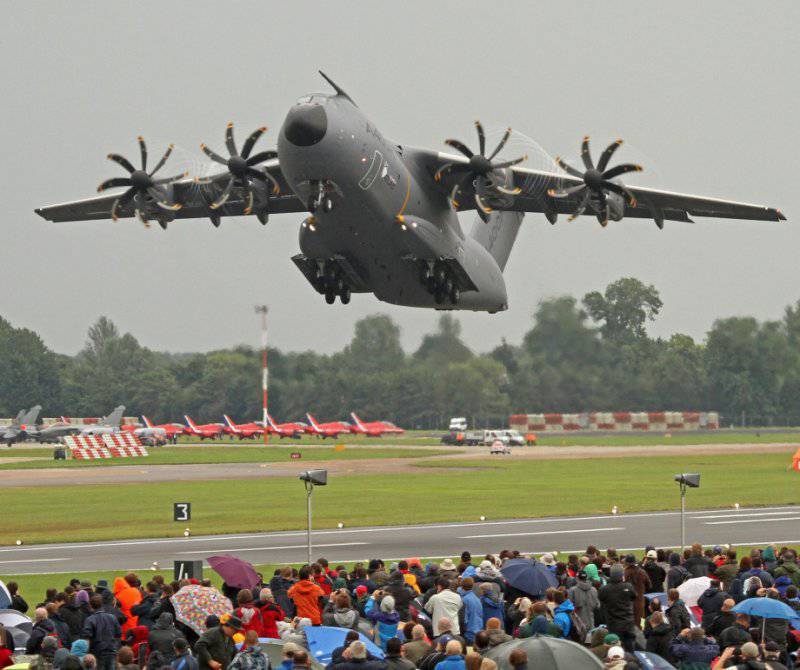 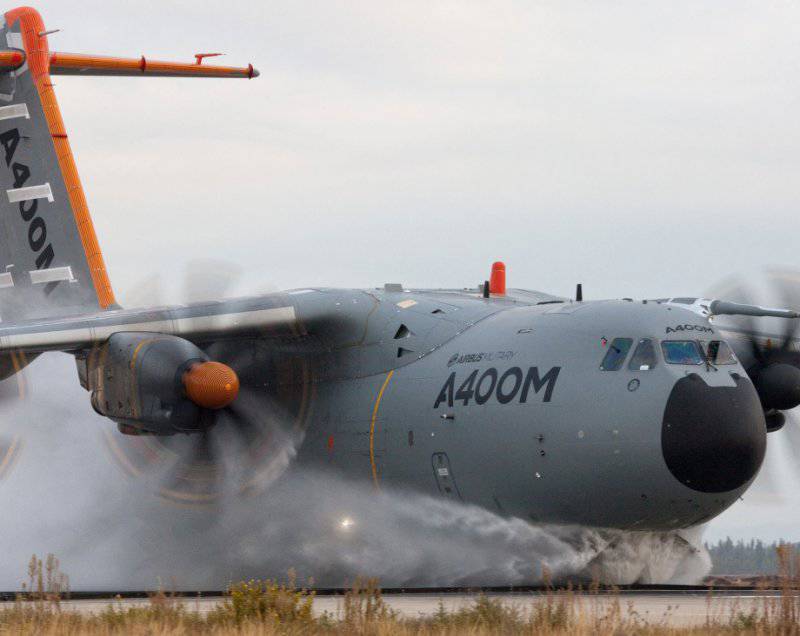 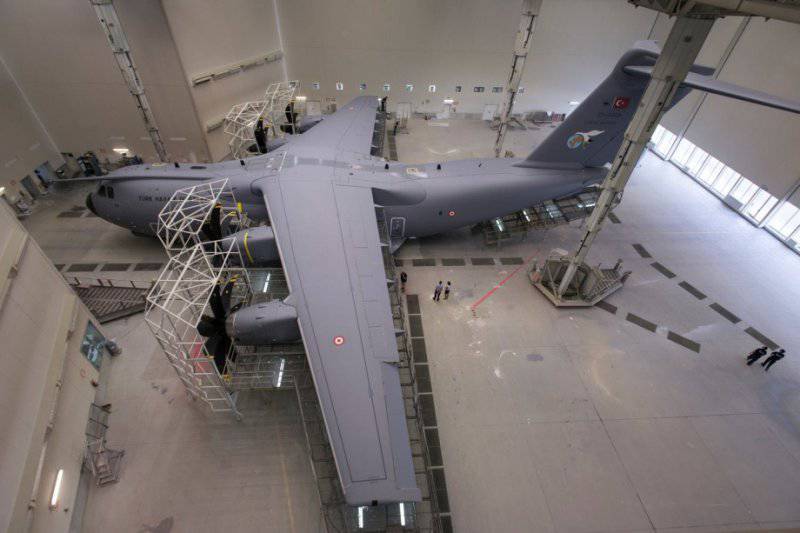 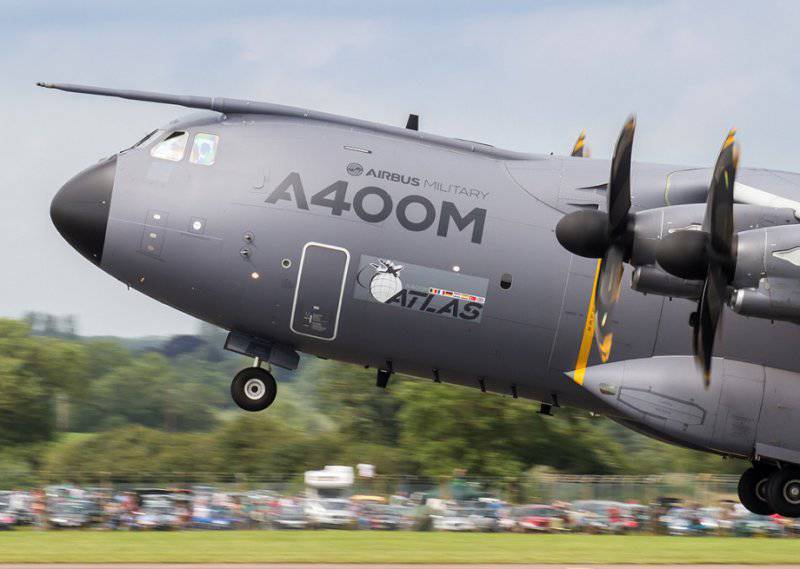 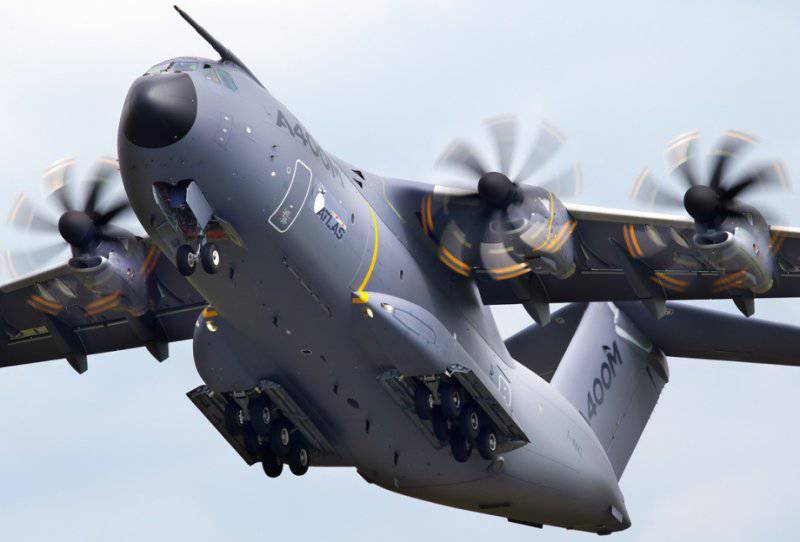 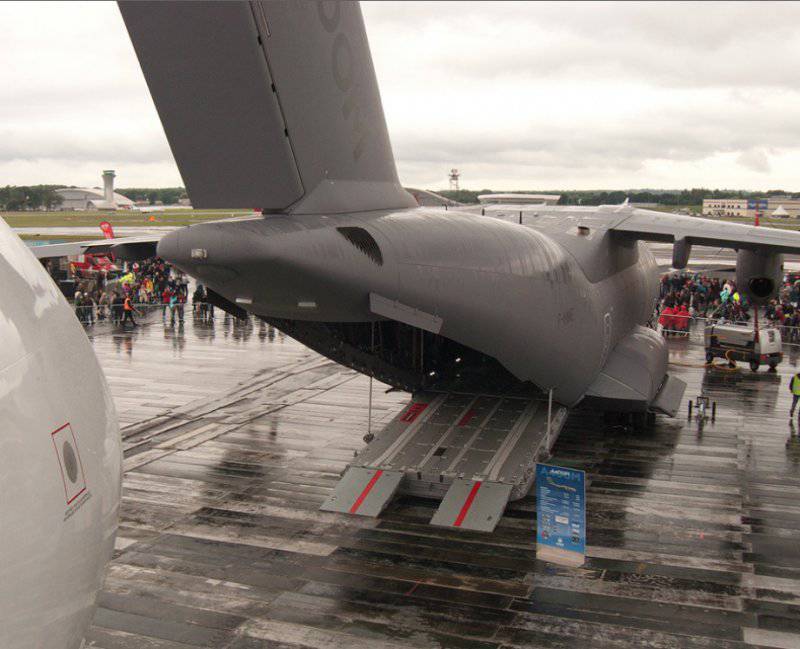 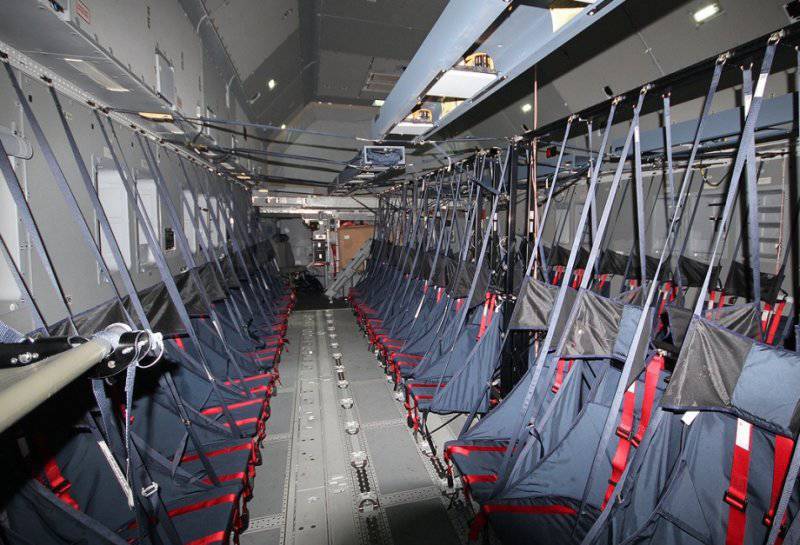 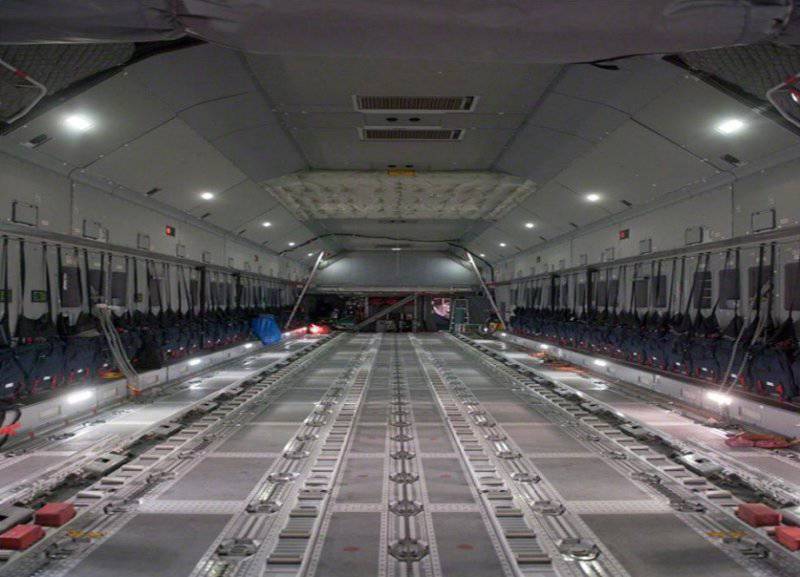 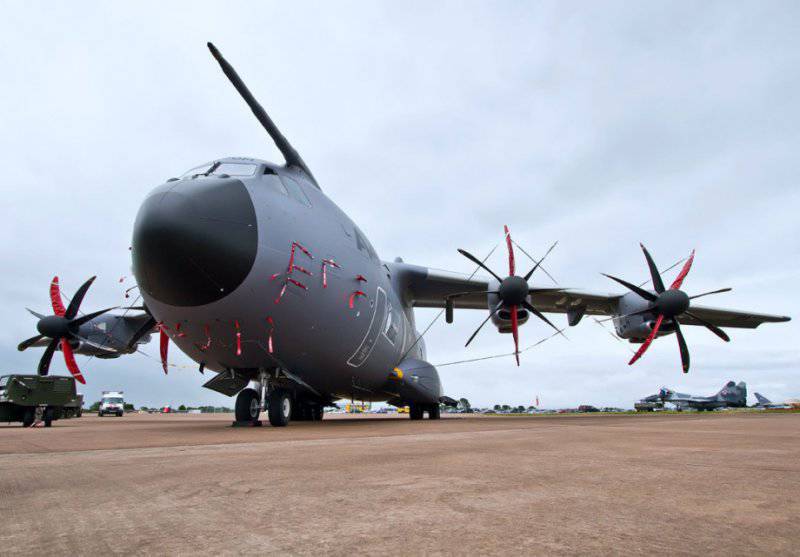 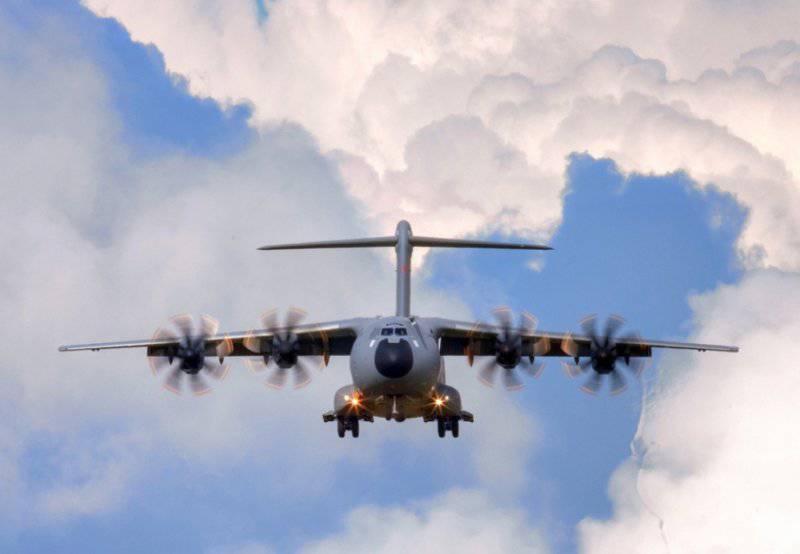 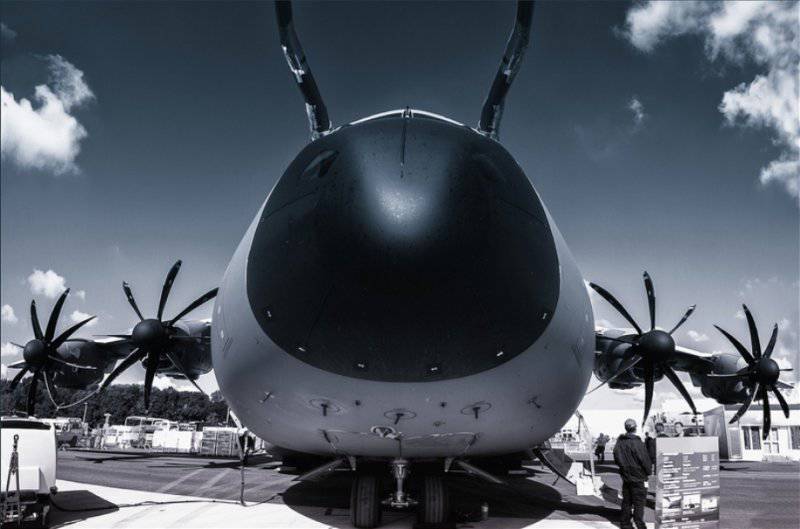 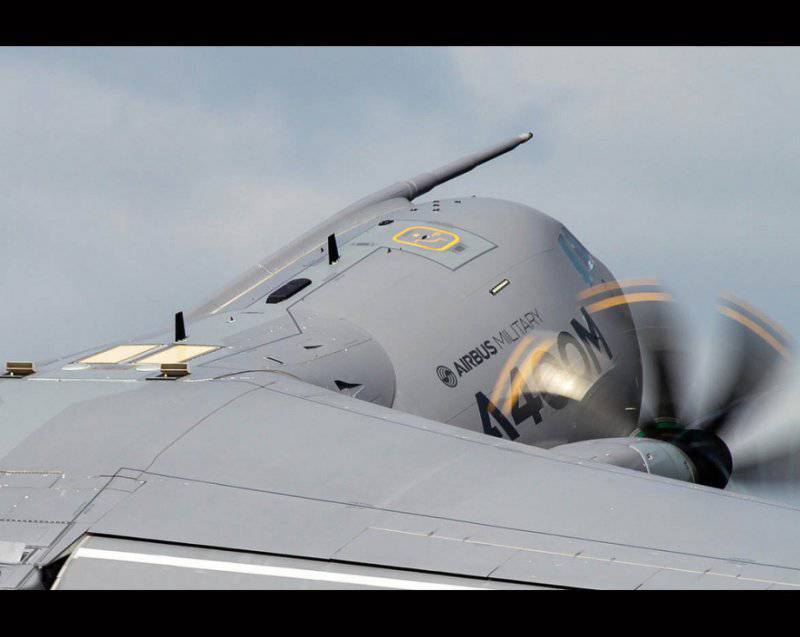 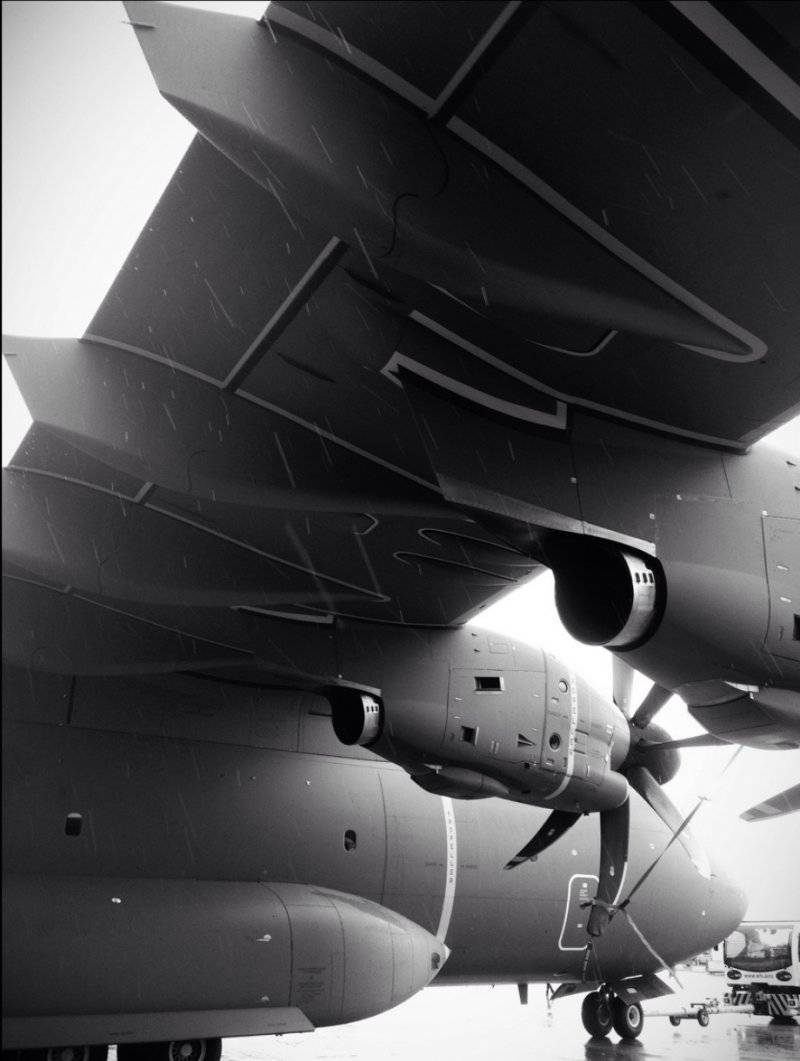 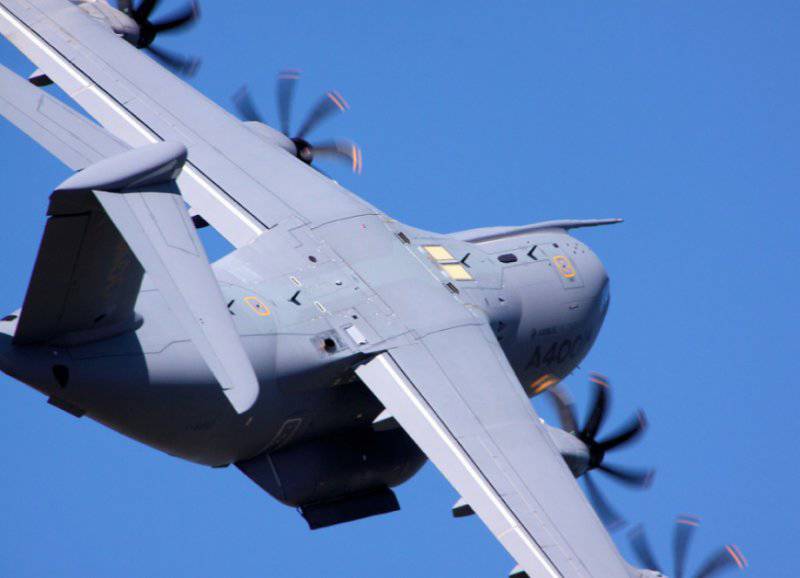 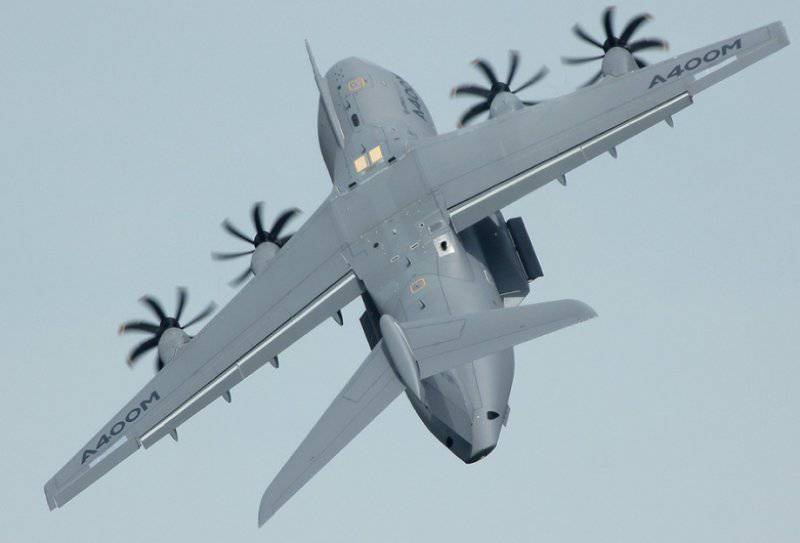 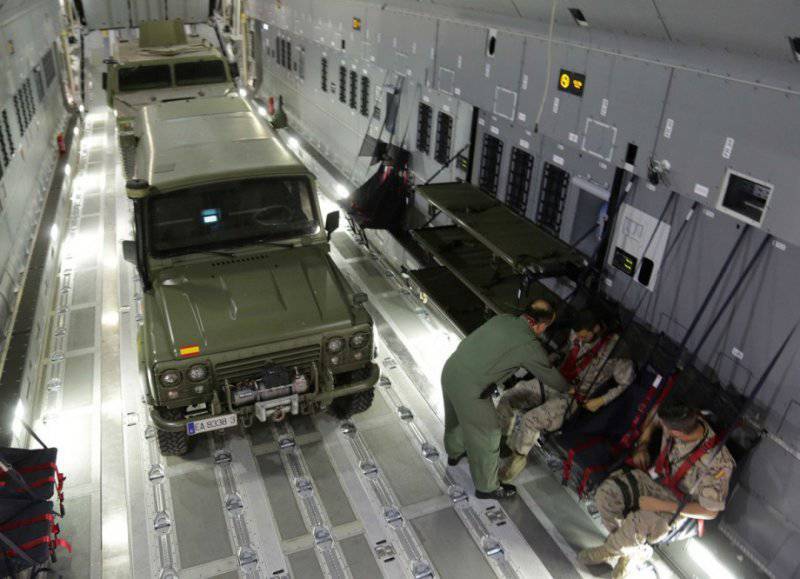 Ctrl Enter
Noticed oshЫbku Highlight text and press. Ctrl + Enter
We are
An-12 in AfghanistanHistory of Soviet Aviation. Polikarpov P-1 - the first serial Soviet aircraft
33 comments
Information
Dear reader, to leave comments on the publication, you must to register.