Modernization of the "Royal Tiger", 1945 year

December 18 2013
39
“Crisis” release program tanksadopted in October 1944, provided for the abandonment of the production of the Royal Tiger. About any of his replacements at least over the next year we were not talking.


Unlike other combat vehicles that were supposed to be produced in the 1945 year, the Royal Tiger had to undergo minimal changes.

The main areas of work on this tank were to be the modernization of the chassis in order to ensure the reliability of its work and improve mobility, as well as improving the effectiveness of weapons.

First of all, it was supposed to install a new Maybach HL 234 gasoline engine with a fuel injection system directly into the cylinders (now this is called the fuel injection system). This should not have caused serious problems, since in terms of dimensions it was almost the same as standing on a Maybach HL230 tank.

Maybach HL 234 was designed in the factories of the eponymous company since the fall of 1944. Work on the new engine was started because of the unreliable performance of the carburetors standing on the Maybach HL 230 — despite the measures taken, it was not possible to bring them to mind.

At a meeting of the “Commission for the Development of Tanks” 23 on January 1945, Colonel Hol-tchauer reported that according to the latest reports from Maybach, tests of the HL 234 engine with a capacity of 900 HP. showed that it has almost the same fuel consumption as the HL 230 version. But, despite the introduction of improvements in the design of cylinders, crankshaft and other parts, the new engine still needs to be improved. 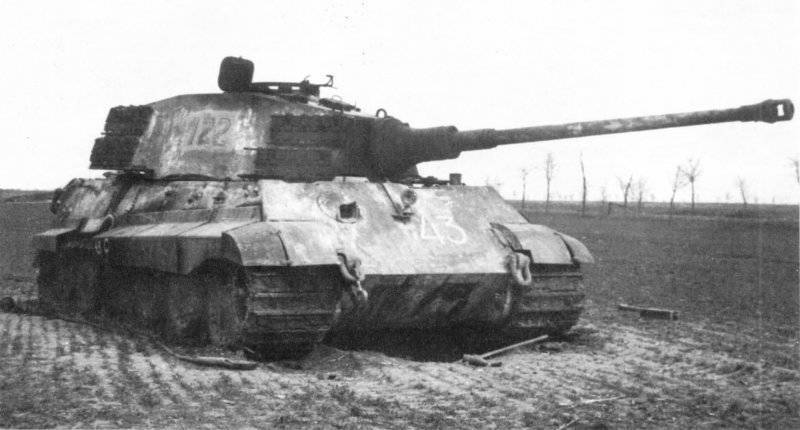 On the same day, a representative of the manufacturer, Dr. Heidekampf, stated that the Maybach HL 234 tests at the stand were not yet completed, and the engine tests in the tank were not started at all. Nevertheless, representatives of the "Tank Development Commission" almost unanimously called for the immediate inclusion of the Maybach HL 234 in the engine production program, given its clear advantages over the Maybach HL 230. However, until the end of the war, it was not even possible to complete the tests of the new engine.

In addition to the Maybach HL 234, it was intended to test Simmering-Pauker-Graz and Argus-MAN air-cooled diesel engines on the Royal Tiger, as well as water-cooled Humboldt-Deutz. According to Aders, the installation of these engines "will require a complete rework of the engine compartment and major changes in the design of the armor case and the track tension mechanism."

It was necessary to make changes to the engine cooling system, on which the control of armaments of the ground forces had long insisted. To this end, Argus has designed a new fan, and also proposed a redesigned grill for air access on the roof of the engine compartment. After testing, both parts were supposed to be installed on serial tanks.

Also considered options for improving the operation of the transmission of the tank through the use of other gear boxes, for example, designed by Zahnradfabrik for the Panther Ausf. F, as well as developed by Puis in Leipzig specifically for the "Royal Tiger". In addition, the tank had to test the hydraulic control system from Zahnradfabrik.

In addition, changes were supposed to be made in the design of the chassis (to increase its reliability), hatches of the driver and radio operator. Also considered were options for additional protection of the roof of the engine compartment from shrapnel and fire. aviation guns.

20 February 1945, the Army Chief of Staff, sent a two-part program to modernize the Royal Tiger to the weapons department. The first part contained those items that could be completed in a short time, which made it possible to improve the fighting qualities of the tank. The implementation of the points of the second part of the program required time and research and testing.

The first part of the Royal Tiger Improvement Program included the following:
mount sight with stabilized field of view - April 1945;
optical rangefinder installation - April 1945;
installation of the engine Maybach HL 234 power 900 l. with. with fuel injection directly into the cylinders - August 1945 of the year. 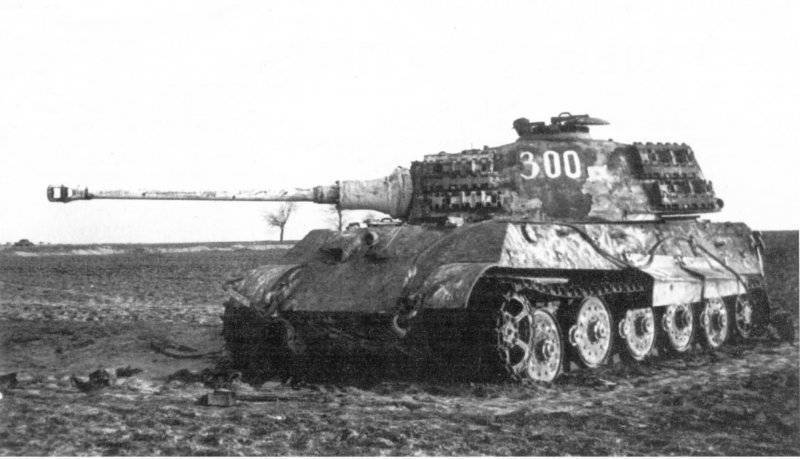 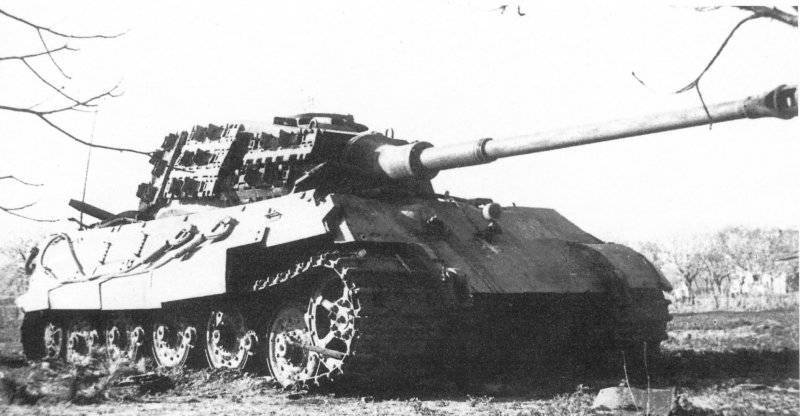 Another “Royal Tiger” release launched the 1945 of the year. Most likely, the car was left by the crew. Pay attention to the spare tracked tracks, mounted on board the tower. Hungary, 3-th Ukrainian Front, March 1945 of the Year (ASKM) 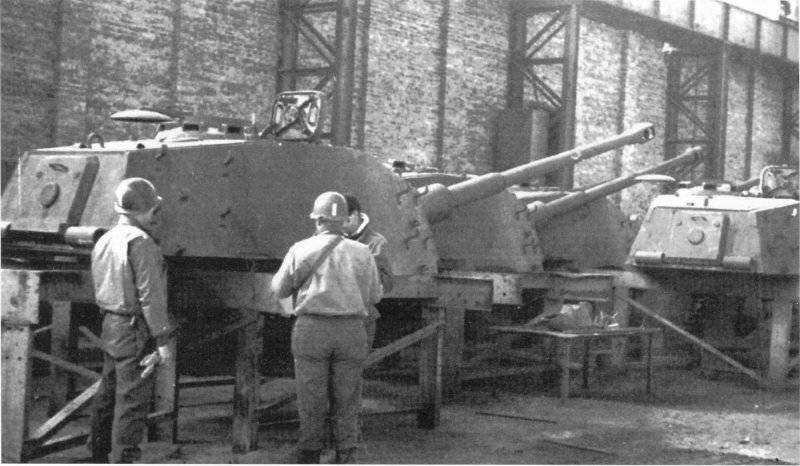 American officers inspect the towers of the "royal tigers", ready for installation on the tanks. Henschel Plant, March 1945 of the Year (AT) 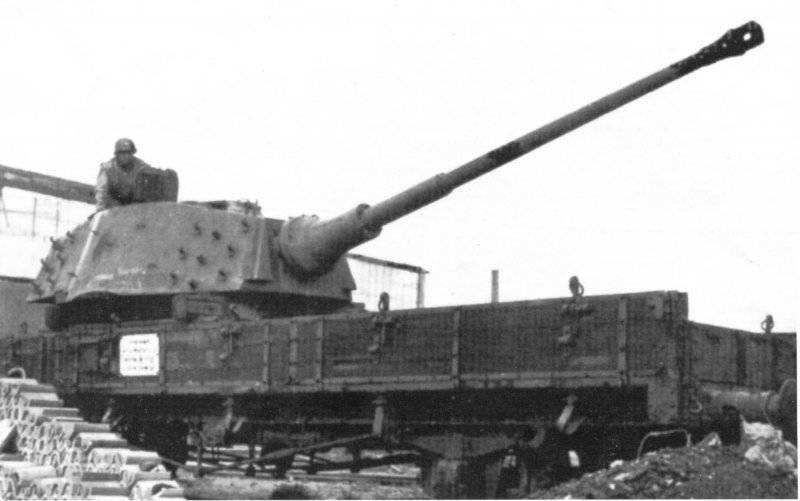 Tower tank "Royal Tiger", which did not have time to unload from the railway platform. Wegmann Plant, Spring 1945 of the Year (ON) 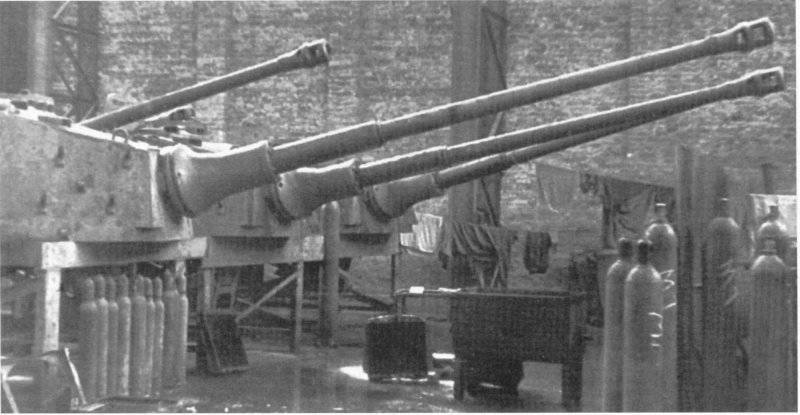 Towers of "royal tigers", ready for installation on tanks. Henschel Plant, March 1945 of the Year (AT)

These projects were priority, and should have been introduced into mass production no later than the specified date. Among the works that required time for completion were the main ones: tests in the Royal Tiger of Simmering-Pauker-Graz and Humboldt-Deutz diesel engines, installing a sight with a stabilized field of view, a stabilized gun, a mechanism that facilitates loading, and systems to protect against poisoning substances.

Work on the creation of a tank sight with a stabilized field of view was carried out in Germany since the 1943 year. For the Royal Tiger, they were designed by Ernst Leitz in Wetzlar together with Krupp engineers. 10 March 1945 last reported to the Tank Armament Test Department (WaPruf 6) that test attempts were made to install a periscope sight with the SZF3 stabilized field of view into the Royal Tiger Tower. It turned out that it is necessary to make some changes to the front sheet of the tower for the convenience of mounting SZF3. Ernst Leitz received an order for the 1000 SZF3 sights, but until the end of the war, none of them was made.

In addition to the periscopic, for the “Royal Tiger” they also designed periscopic sights with a stabilized field of view. They were engaged in the companies Carl Zeiss in Jena and Kreiselgeraete AG in Berlin. The greatest success was achieved by the latter, who worked on two variants of sights - Turmwinkelzielfemrohr 2 and Turmwinkelzielfemrohr 3. To install them in the roof of the tower on the left side it was necessary to cut a special hole. The sight head on top was protected by an armored cap.

The installation of the 1,6-meter rangefinder at the Royal Tiger began in October 1944, and was carried out by Krupp. February 28 1945, the last reported to the test department of tank weapons (WaPruf 6), that the first version of the tower with the installation of a rangefinder is supposed to produce by March 31. From the usual serial, it differed by the presence in the sides of two armored spherical projections for rangefinder lenses. According to the calculations of the company Krupp, their mass production was to begin with the 601-th tower, around mid-July 1945 year.

As for the stabilized cannon, 24 January 1945, the leadership of the test department of tank weapons (WaPruf 6) reported to Krupp that the contract for the development of such an artillery system was concluded with the company Kreiselgeraete AG in Berlin. A month later, on February 20, Krupp was awarded a contract to install a recoilless 88-mm L / 71 cannon - Geschuetzrohr 8,8 cm L / 71 Starr in the “Royal Tiger” turret. This was a direct result of the successful testing of the 75-mm recoilless cannon in the Jagdpanzer 38 Starr. The place that was released after dismantling the recoil devices was planned to be used to install a semi-automatic mechanism or automatic feeding of shots to the gun (some kind of modern loader mechanism). This mechanism also had to be designed by Krupp, and Kreiselgeraete AG was assigned to develop a stabilizer for this instrument. However, by the end of the war until the completion of these works was very far. 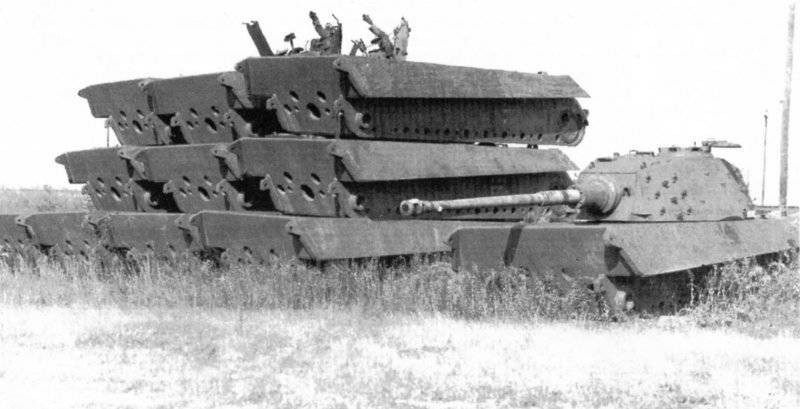 Corps and tower of tanks "Royal Tiger", delivered to the factory of the company Wegmann for assembling tanks. Spring 1945 of the year (ON) 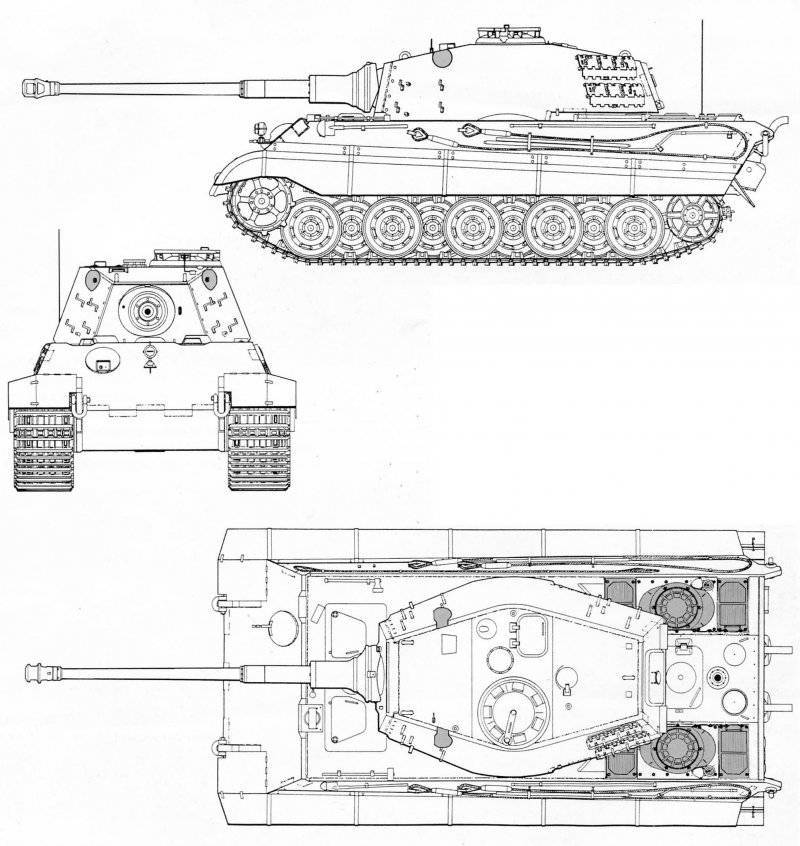 Modernized tank "Royal Tiger" with modifications that could appear on the machine in the summer of 1945, the installation of a rangefinder in the tower, a new fan and fan grilles on the roof of the engine compartment (highlighted in gray)

Some sources mention the Royal Tiger’s 105-mm L / 68 cannon armament project. Indeed, this version of the machine was proposed by Krupp in November 1944, along with options for other tanks and SPG, as mentioned above. However, the conclusion of the Tank Armaments Test Department (WaPruf 6) under this option, sent in January 1945 to the Army Armaments Directorate, was negative:

“The alleged 10,5-cm gun is not adopted by the army. Therefore, the decision to install such an instrument in a tank is not reasonable. In any case, this will require the installation of new sights, and you will probably have to make changes to the design of the tower. The use of ammunition separate loading, first of all will lead to a significant reduction in the rate of fire. In addition, a second loader is required for servicing the gun;

Summarizing, we can say that in the 1945, the “Royal Tiger” could appear with the installation of a range finder, a sight with a stabilized field of view, a new engine - this could be either the Maybach HL 234 carburetor or one of the diesel engines mentioned above - and, possibly a modernized transmission. Thus, the work on the “Royal Tiger” was aimed at improving the efficiency of tank armament and the reliability of the machine as a whole. 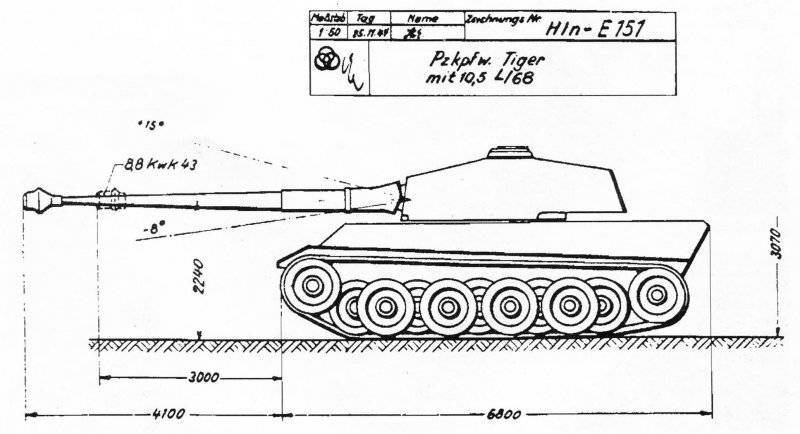 With regard to the installation of 88-mm recoilless gun and gun stabilizer, then these works could hardly be completed in the near future.

Information about the possible modernization of heavy tank destroyer "Yagdtigr", produced on the chassis of the "Royal Tiger", could not be found. But in a document from 1 March 1945 of the year “Review of the state of armament for tanks, assault, self-propelled guns and tractors until August 1945 of the year” 1 in May, and the rest until August. It can be assumed that these self-propelled guns could get the elements of modernization that were supposed to be introduced into the design of the base chassis.