December 17 2013
31
The Tunguska-M1 anti-aircraft cannon and missile system was designed in the second half of the 1990s and was adopted by the Russian army in 2003. The lead developer of the Tunguska-M1 air defense missile system is the State Unitary Enterprise "Instrument-making Design Bureau" (the city of Tula), the machine is produced by OJSC "Ulyanovsk Mechanical Plant". The main weapon of the modernized complex is the ZSU 2S6M1 "Tunguska-M1". Its main purpose is to provide air defense tank and motorized rifle units both on the march and during hostilities.


ZSU "Tunguska-M1" provides the detection, identification, tracking and subsequent destruction of various types of air targets (helicopters, tactical aircraft aviation, cruise missiles, drones) when working on the move, from short stops and from a place, as well as the destruction of surface and ground targets, objects that are dropped by parachutes. This anti-aircraft self-propelled gun was the first to achieve a combination of two types of weapons (cannon and rocket) with a single radar-instrument complex for them.

Gun armament ZSU "Tunguska-M1" consists of two 30-mm anti-aircraft double-barreled rapid-fire guns. The high total rate of fire - at the level of 5000 shots / min - ensures effective destruction of even high-speed air targets that are in the zone of attack of the complex for a relatively short time. High pointing accuracy weapons (achieved due to good stabilization of the line of the shot) and a high rate of fire allow you to fire at aerial targets, while in motion. Ammunition consists of 1904 30-mm shots, with each of the machines of the installation has an independent power system. 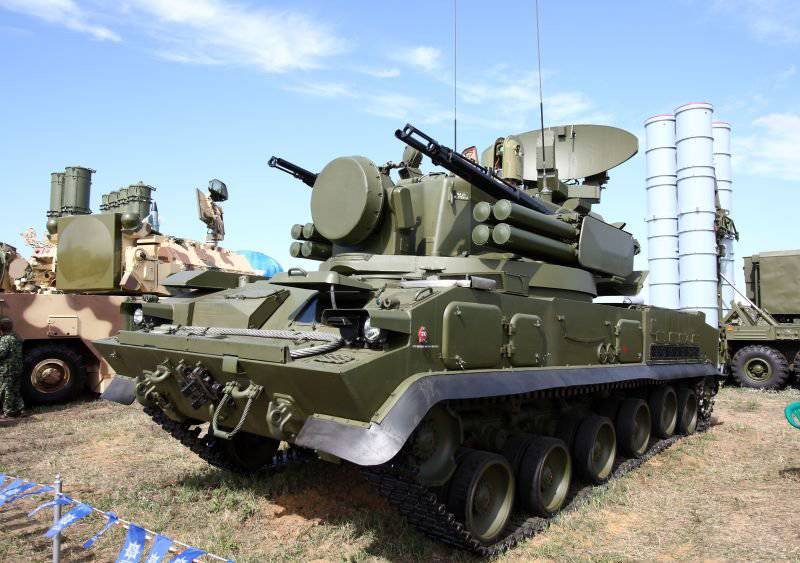 The missile armament of the Tunguska-M1 RMS consists of 8 and 9М311 SAM. This bikalibernaya rocket, solid fuel, two-stage, it has a detachable starting engine. Aiming the SAM to the target is a radio command with an optical communication line. At the same time, the rocket is very maneuverable and resistant to overloads up to 35 g, which makes it possible to hit actively maneuvering and high-speed air targets. The average flight speed of a rocket at its maximum range is 550 m / s.

The experience gained during the active operation of previous versions of the Tunguska air defense missile system demonstrated the need to increase the level of noise immunity when firing missiles at targets that have the means of setting optical interference. In addition, it was planned to introduce into the complex the equipment for automated reception and implementation of target indications received from higher command stations in order to increase the effectiveness of the combat operation of the Tunguska battery at intensive air attack.

The consequence of all this was the development of the new TGUSK-M1 reserve missile system, which is characterized by significantly increased combat performance. A new anti-aircraft guided missile, equipped with a modernized control system and a pulsed optical transponder, was created to arm this complex, which made it possible to significantly increase the noise immunity of the missile defense control channel and increase the probability of destroying air targets that operate under the cover of optical interference. In addition, the new rocket received a proximity radar fuse, which has a range of up to 5 meters. Such a move made it possible to increase the efficiency of Tunguska in the fight against small air targets. At the same time, an increase in the operating time of the engines made it possible to bring the range of air destruction from 8 thousands to 10 thousands of meters. 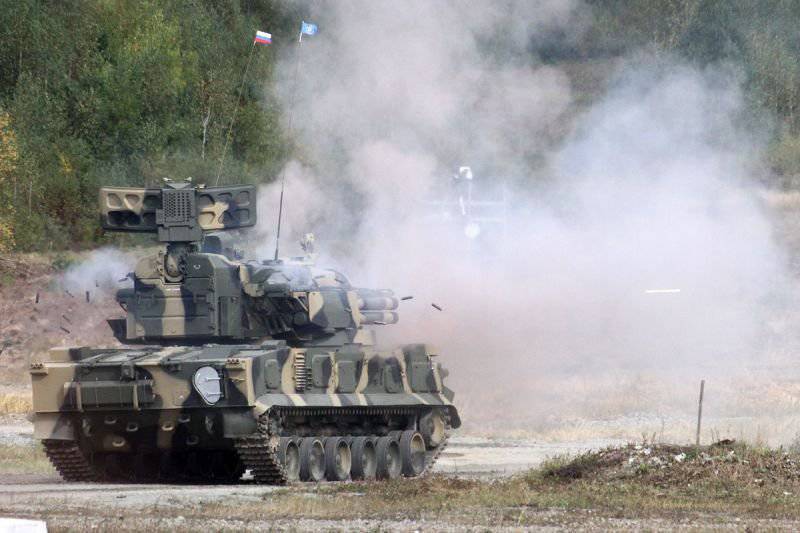 Introduction to the complex of equipment for automated processing and reception of data from external target designation from a command post (like a PRDU, a mobile reconnaissance and control center) significantly increased the effectiveness of the combat use of the complex’s batteries during a massive enemy raid. The use of a modernized digital computing system (CWS) built on a modern elemental base allowed us to significantly expand the functionality of the 2С6М1 ZSU in solving control and combat tasks, as well as to increase the accuracy of their implementation.

The modernization of the optical sighting equipment of the complex made it possible to significantly simplify the entire process of target tracking by the gunner, at the same time increasing the accuracy of target tracking and reducing the effectiveness of the combat use of the optical guidance channel from the professional level of the gunner’s training. The modernization of the Tunguska radar system carried out by the missile defense system “Tunguska” allowed the gunner’s “unloading” system to work, and the data to be received and implemented from external targeting sources. In addition, the overall level of reliability of the equipment of the complex was improved, the operational and technical characteristics were improved.

The use of a more sophisticated and powerful gas turbine engine with 2 times the service life (600 hours instead of 300), increased the power of the entire power system of the installation, achieving a reduction in power drawdowns during operation with the included hydraulics of weapon systems.

Simultaneously with this, work was carried out on the installation of a thermal imaging and television channels equipped with a target tracking machine at the ZNU 2С6М1, in addition to this, the detection and targeting station itself (SOC) was upgraded to increase the target detection area by flight altitude to 6 thousand meters (instead of existing 3,5 thousand meters). This was achieved through the introduction of 2-x angles of the position of the SOC in the vertical plane. 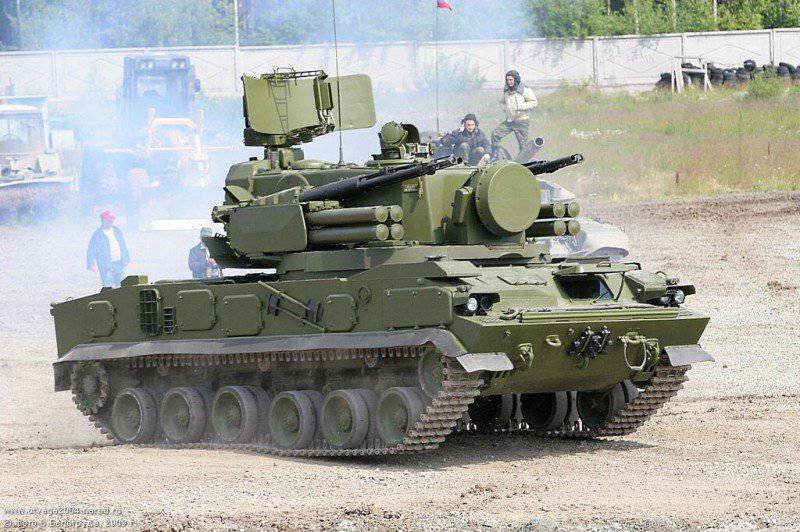 Factory tests of the ZNS 2C6М1 model upgraded in this way confirmed the high efficiency of the entered options when operating the complex for air and ground targets. The presence on the installation of thermal and television channels with automatic target tracking ensures the presence of a passive target tracking channel and the per-day use of existing missiles. ZSU "Tunguska-M1" is able to provide combat work, while on the move, acting in the battle formations of covered military units. The system of air defense in terms of the totality of the qualities and effectiveness of the protection of subunits against enemy air attack weapons made from low altitudes has no analogues in the world.

The modification of the Tunguska-M1 complex is distinguished by a fully automated process of guiding missiles at a target and exchanging information with a battery-operated gearbox. In the rocket itself, the laser proximity sensor of the target was replaced with a radar sensor, which had a positive effect on the destruction of the ALCM cruise missiles. Instead of a tracer, a pulsed lamp was mounted on the device, the efficiency of which increased 1,3-1,5 times. The range of anti-aircraft guided missiles was brought to 10 thousands of meters. In addition, work began on the replacement of the GM-352 chassis produced in Belarus with the domestic GM-5975, created in Mytischi on the Metrovagonmash software.

In general, in the 2K22М1 “Tunguska-М1” complex, which was adopted in 2003, it was possible to implement a number of technical solutions that expanded its combat capabilities:

- The complex was introduced equipment reception and implementation of external automated targeting. With the help of a radio channel, this equipment is interfaced with a battery gearbox, and this in turn allows you to automatically distribute targets between the battery ZSU and the battery gearbox Rangier and significantly increases the effectiveness of the combat use of the complex. 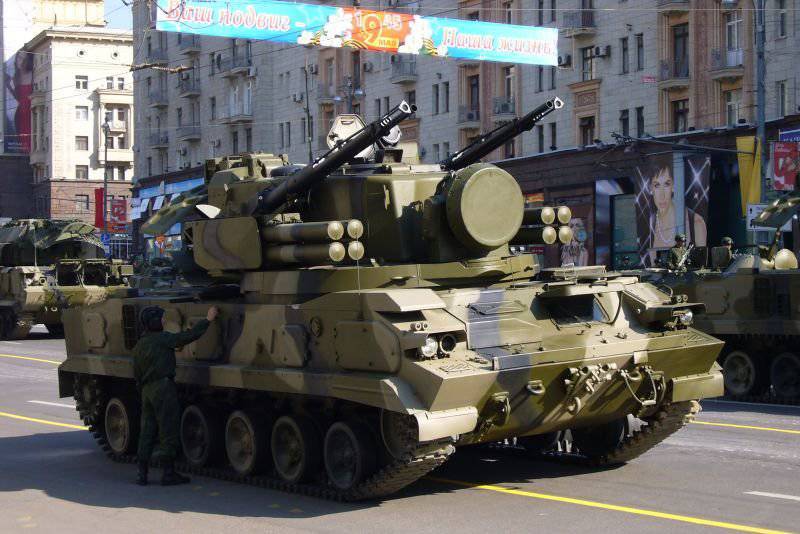 - The unloading schemes were implemented in the complex, which significantly facilitated the work of the Tunguska gunner when escorting mobile air targets using an optical sight. In fact, everything was reduced to working as if with a fixed target, which significantly reduced the number of errors in target tracking (this is very important when firing a missile target, since the maximum slip should not exceed 5 meters).

- The system for measuring course and pitch angles was changed, which significantly reduced the disturbing effects on the installed gyros that appeared during the movement of the machine. It was also possible to reduce the number of errors in measuring course angles and inclination of the ZSU, to increase the stability of the control circuit for the FOR, and therefore increase the probability of hitting air targets.

- In connection with the use of a new type of rocket, the equipment for extracting coordinates was modernized. In addition to the continuous light source, the rocket also received a pulsed source. This solution increased the noise immunity of the missile defense equipment and made it possible to effectively defeat air targets that have optical jamming systems. The use of a new type of missile also increased the range of destruction of aerial targets - up to 10 thousands of meters. In addition, a new radar non-contact target sensor (NDC) was introduced into the rocket design, which has a radius of operation up to 5 meters. Its use had a positive effect on the defeat of small air targets, for example, cruise missiles.

In general, in the course of modernization work, a significant increase in efficiency was achieved. The “Tunguska-М1” air-defense missile system is more effective than the previous version of the “Tunguska-M” complex in the conditions of the enemy’s jamming in 1,3-1,5.