December 17 2013
17
Ever since the Civil War, the Red Army commanders paid great attention to personal firearms. arms. Such qualities as reliability and efficiency, were put on the 1-e place. At the same time, in the war-torn country, the belligerent parties were armed with weapons of English, German and Belgian production, and revolvers and pistols of dozens of different systems were encountered. Among the presented diversity, the most prominent variants of the German Mauser C-96 pistol, having an added holster-butt, and Browning pistols. Both of these names in the arms world have become a household name. They are known just as the legendary designer pistol TT - Tokarev. However, a number of weapon designers, as well as their inventions, remained forever forgotten and not known to the general public. One of such products are Vojvodina pistols.


In 20-ies, the young Soviet state tried to fill the shortage of automatic pistols by buying in Germany 7,63-mm Mauser pistols mod. 1896 of the year. In addition to the commanders of the Red Army, these weapons were actively used by the organs of the Cheka, the OGPU, and later the NKVD. At the end of the 20s, the Soviet gunsmith designers were given the task of devising a new army automatic pistol. The 7,62-mm cartridge was chosen as the main cartridge for the new weapon. As a result, after a series of brief tests in 1930, mass production of TT pistols began. The first sample of the gun design Tokarev was quite "raw." A stage of its refinement and processing followed, with the result that it was finally put into service in 1933. However, by the end of the 1930-s in the USSR, a competition was again announced for the development of an army pistol. The reason for this was the uncorrected lack of TT arr. The 1933 of the Year — the weapon's fuse system was not very reliable.

Both FV Tokarev and other gunsmiths participated in the competition for a new model: S. A. Korovin, I. I. Rakov, P. V. Voevodin. The first field tests of the pistols they presented were conducted in June 1940 of the year. None of the submitted test samples passed. As a result, the designers completed the revision of their products and in March 1941, again presented the pistols to the competition. According to the results of the new test series, the commission gave preference to the Vojvodina design pistol. Its main advantages were good firing rate and accuracy of fire, as well as a large store capacity. However, the outbreak of World War II did not allow Vojvodina pistol to take up arms. During the war, it was impractical to switch to a pistol of a new design, throwing a TT pistol that had been well developed in production, which was mass produced at various factories. 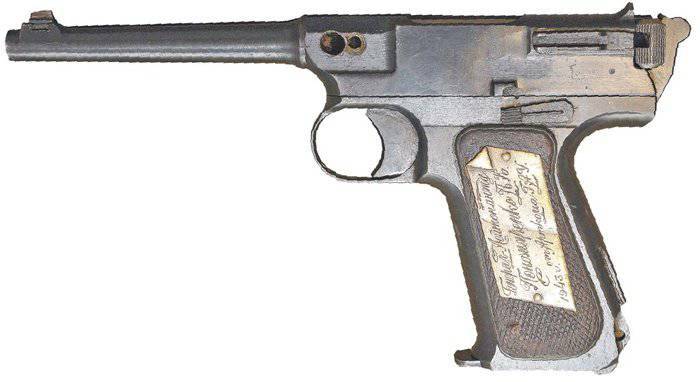 On trials, the Vojvodina pistol was presented in 2 variants, which were distinguished by insignificant design changes. The barrel bore was locked using a special liner skew, its rear end rested against the receiver, and the battle stop at its front end was engaged with the bolt stop. The pistol had a trigger type trigger mechanism, which allowed only single shots to be fired from it. The trigger mechanism in the assembled form could be separated from the trigger frame in the same way as it was implemented in the TT pistol. The gun was equipped with a box-type 9-charging magazine with a single-row arrangement of cartridges. Reflection of spent cartridges was carried out using a special rigid reflector, which was mounted on the receiver on the left side.

In one of the pistols presented by Voevodin, the barrel was covered with a special casing that was attached to the trigger frame. Its front end was made in the form of a muzzle brake. The constant sight of such a pistol was shot at a distance of 25 meters. In another sample of the pistol, the casing was missing; there was also a special aiming bar with divisions on it, which was designed for a firing range from 25 to 300 meters.

Simultaneously with the creation of the 9-charging version of his gun, Voevodin also designed the 18-charging version. The automatics of his work was based on the principle of a short stroke with a receiver. The pistol was also equipped with a box-type magazine, but with a double-row arrangement of cartridges. The sight of this gun was constant and ensured firing at a distance of up to 50 meters. 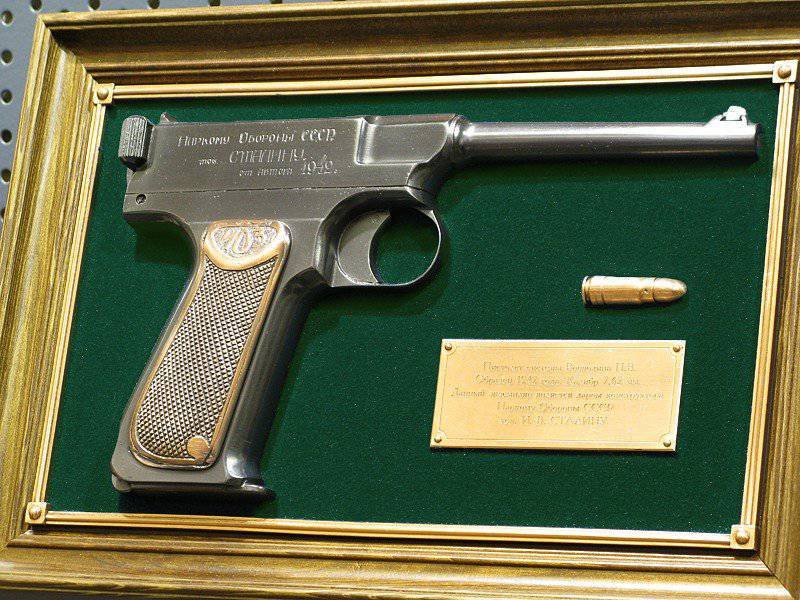 The first ground tests of the 18-charging version were conducted in June of the 1940 year. The tests failed the pistol due to the large number of delays (6,5%), while the commission members noted that the design of the pistol and the capacity of its store deserve great attention.

Further tests of the pistol designed by P.V. Voevodin were carried out in March 1941, in parallel with the tests of the Korovin and Rykov army pistols, which also managed to refine their samples. 6 April 1941, the results of the tests were reviewed by the Directorate of small arms GAU. The findings of the commission boiled down to the fact that the Vojvodina design pistol most satisfies the requirements of tactical and technical requirements. The main advantages of the model in comparison with other pistols were called shooting accuracy and a large magazine capacity, which significantly increased the practical rate of fire of the weapon. In addition, the Vojvodina pistol showed the best results in reliability of reliable operation in any operating conditions and reliability of automation. During the test, the gun gave the least amount of delays and no breakage of parts.

Separately, it is worth noting the characteristic appearance of the gun, which was due to the requirements of the terms of reference. One of the reasons for the announcement of the competition for the creation of a new pistol was that the TT mod. 1933 could not be used normally in the armored troops of the Red Army. The barrel of the TT in the casing was too thick to be inserted into the inspection slot of an armored vehicle or tank and shoot back from enemy infantry. For this reason, TT did not suit all military personnel. Based on these considerations, the front of the Voevodin pistol was distinguished by its revolver shape, the barrel was quite thin and could easily enter the inspection slots and loopholes of tanks.

The Vojvodina pistol was somewhat larger and heavier than the TT, but differed from it for the better in other characteristics, especially in terms of reliability of use and rate of fire. Comparison of these pistols with the most advanced foreign counterparts has shown that Voevodin’s pistol of the Voivodina design was not inferior to Mauser — the Astra, Parabellum and Vebley-Scott — and the initial speed of the bullet and practical rate of fire simply had no equal.

Although the Great Patriotic War prevented the adoption of Vojvodina’s weapon into service, some of them were still manufactured before the 1942 year (according to some sources, up to 1500 units), including in Izhevsk. During the war, Voevodin continued to work on improving the design of his pistol, and one of the samples even sent a personal gift to Stalin. At present, this pistol is engraved with a gift inscription “To the USSR People's Commissar of Defense Comrade. Stalin from the author. 1942 ”is stored in St. Petersburg in the funds of the artillery museum.

Ctrl Enter
Noticed oshЫbku Highlight text and press. Ctrl + Enter
We are
Revolvers of the Wild WestRussian revolvers
17 comments
Information
Dear reader, to leave comments on the publication, you must to register.