"The EU has no right to anything was to demand" 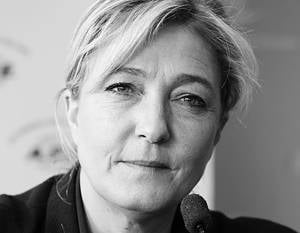 “A year ago, one and a half million Frenchmen went out against Francois Hollande, and I didn’t hear that the European Union demanded the resignation of Francois Hollande or accused him of illegitimacy,” the French National Front’s leader Marine Le Pen told LOOK to the newspaper. In her opinion, now Brussels is openly interfering in the sovereign affairs of Ukraine, which in fact does not need European integration at all.


On Friday, Russian Deputy Foreign Minister Alexei Meshkov said that Ukrainians should have freedom of choice in the issue of European integration, and not to make that choice under the influence of the European Union, as it means interference in the internal affairs of the state.

On the eve of the Prime Minister of Ukraine Mykola Azarov said that Kiev will soon sign an association agreement with the EU. A source in Brussels noted that the EU hopes to sign an agreement at the upcoming bilateral summit in 2014, which can take place in spring. At the same time, Azarov said that Ukraine is seeking changes in the implementation of the treaty with the EU, rather than revising the text of the agreement. According to him, this is necessary to preserve the normal functioning of the Ukrainian economy and the agricultural sector of the country.

Later, after negotiations with Deputy Prime Minister of Ukraine Sergey Arbuzov, European Commissioner for Expansion and European Neighborhood Policy Stefan Fule said that the European Union had agreed with Ukraine on the preparation of a roadmap for the implementation of the agreement.

Until now, European politicians in every way made it clear that they are interested in Ukrainian domestic dialogue is much less than the signing of an association agreement Kiev on any terms. A number of European leaders, even openly talked about the fact that the European future of Ukraine needs a new government.

However, not everyone in Europe believes that Ukraine made a mistake by refusing to sign an association agreement. The leader of the French National Front was among those who consider Kiev’s position to be correct. The party led by her consistently opposes the processes of European integration, demanding greater independence of France from the EU and international organizations.

About his position regarding the European integration of Ukraine Marine Le Pen said in an interview with LOOK.

VIEW: During your visit to Sevastopol this summer, you stated about the European integration of Ukraine that you perceive the country as a friend, and "friends are not invited to a nightmare." Has your opinion changed since then?

VIEW: Now you are watching what is happening in Ukraine?

M.LP: Yes, I observe, but through the French press, which can not be called impartial.

VIEW: How could you evaluate the actions of Ukrainian President Viktor Yanukovych?

MLP: I do not assume the role of manager in the internal affairs of sovereign countries. But what I find surprising is the fact that the European Union, based on the opinion of several tens of thousands of protesters, declares the illegitimacy of the Ukrainian president. And I find it even more surprising, given the fact that, as we remember, a year ago, a half million Frenchmen went out into the street against Francois Hollande, and I did not hear the European Union demanding the resignation of Francois Hollande or accusing him of illegitimacy. If there are disagreements between a part of the Ukrainian population and the president, then there are elections. But to demand the premature departure of the President of Ukraine on the basis of manifestations — I find it strange. In France last year there were very mass demonstrations, but no one demanded anything like that.

MLP: Of course. And I was very shocked that Mr. Fabius, the French foreign minister, intends to receive the Ukrainian oppositionist. I see, however, that he canceled this meeting, but I find it quite shocking. This is not done. Or international law no longer exists.

VIEW: What do you think about the latest requirements of Kiev, who said that the agreement with the EU will be signed if Ukraine receives financial assistance from Europe in the amount of 20 billion euros?

MLP: I do not know what the level of sincerity of this proposal is.

VIEW: But it’s not the EU that is offering Ukraine, it’s Yanukovich’s demand from the EU ...

MLP: I understood. Some analysts believe that President Yanukovych has formed this requirement in order for the EU to reject it in order to demonstrate to the Ukrainian people that the financial manna that Ukrainians expect from the European Union is actually a mirage. So I don’t know what the nature of this demand is, whether it was sincere, or whether it’s a tactical move because of everything that is happening in Ukraine today ... I don’t know, I don’t have enough information on this topic.

VIEW: In your opinion, is the European Union really ready to take Ukraine in its arms? Moreover, British Prime Minister David Cameron recently warned that he would not allow Bulgarians and Romanians already employed in the EU to work in England, even if it violated EU principles?

MLP: The European Union is in no way capable of accepting any country today. The European Union is practically devastated and is experiencing the most severe problems with the last countries that have entered - Bulgaria and Romania. Any new “window” for any new country will only accelerate the weakening of the EU.

MLP: The problem is that “new countries” that had a level of economic development that was too different from the “old” EU countries received hundreds of billions of euro in aid. Such assistance lasts for several years. But then black bread comes to replace white bread. Today, the European Union has no more money. He does not have that level of well-being, like 10 years ago. From which it follows that if the Ukrainians hope that when entering the European Union, financial manna will be spilled on them from the sky, as was the case with Poland, they are mistaken.

VIEW: What, in your opinion, can be the optimal way out for Ukraine from the current situation?

MLP: The most desirable way out of any political crisis is elections. At least this solves the problem. In my opinion, if the process of diplomacy between the opposition and the parliamentary majority does not lead to a way out of the crisis, it is necessary to organize a referendum.

MLP: And very good! If, within the framework of agreements between the current government and the opposition, it would be decided to organize elections, this is one thing, but if the European Union demands these elections, it is completely different. The European Union has no right to demand anything.

VIEW: A slight departure from the topic ... Forbes Magazine recognized Russian President Vladimir Putin as "the most influential person in the world" in 2013. What is your assessment of Vladimir Putin?

MLP: Undoubtedly, Vladimir Putin has returned Russia to the community of countries that have a strong influence on world development. And this is something new. I think that at the time of the Syrian crisis, Russia once again occupied a very important place in world diplomacy, a place that Russia may have lost in the past. Undoubtedly, in 2013, Vladimir Putin spoke on the geopolitical scene as a very influential person.

Ctrl Enter
Noticed oshЫbku Highlight text and press. Ctrl + Enter
We are
Russia is being attacked because it is an alternative to the American model of global orderWhat you didn't want to know about England
47 comments
Information
Dear reader, to leave comments on the publication, you must to register.