The enemy of my enemy is my friend: is it possible to bring Turkey and Israel closer 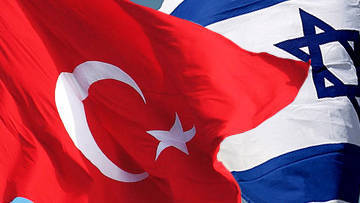 Some smoothing of the corners in relations between the US and Iran is an excellent reason to return to the topic of the strategic partnership of Turkey and Israel. Between these countries is much more common than it may seem, and this general is much more important than such an abstraction as religious differences. These are geopolitical interests.


Geographically, both states are, to put it mildly, not in the most friendly environment. Turkey borders with Iraqi Kurdistan, Syria, Greece, Bulgaria, Iran, Armenia and Georgia. The latter is perhaps the only country with which the Turks have no mutual claims. There is nothing to say about Israel - that is not a border, then a front.

Both states, unlike most of their neighbors, are democratic - both in Turkey and Israel, elections are practiced, there are no dynasties of power. And finally, both countries are oriented toward the West and have the same strategic partners and allies in the person of the United States and NATO countries. December 5 Israeli Environment Minister Amir Peretz arrived in Istanbul to participate in an international conference on shipping and the protection of marine ecology. Peretz became the first member of the Israeli government to visit Turkey after the incident with the ship Mavi Marmara, as a result of which there was a strong cooling in bilateral relations.

Recall: on the night of 30 on 31 in May of 2010, an Israeli special forces stormed a Turkish vessel, attempting to enter Gaza without the permission of the authorities. Then 9 of Turkish citizens died, and about 15 Israeli soldiers were injured. This incident caused a strong reaction in many countries and protests around the world. In March 2013, Israeli Prime Minister Benjamin Netanyahu apologized to his Turkish counterpart Recep Erdogan and agreed to pay material assistance to the families of the victims. It happened in the last days of the visit to Israel of US President Barack Obama, which gave rise to numerous comments, the meaning of which was reduced to the fact that Netanyahu apologized under pressure from the American president.

Be that as it may, both sides took this step with relief. Immediately, the process of normalization was launched, Turkey and Israel actively began to discuss the details of cooperation and even started talking about the return of ambassadors. And although it is not yet possible to restore the previous level of trust, it was simply unproductive to remain in a state of quarrel. Truth be told, even then, in 2010, Turkey’s wrathful rhetoric against Israel and all the talk about the hard line seemed somewhat feigned. And that's why.

Arab spring is in full swing. The intelligentsia of many countries, the Turkish model of society, in which national traditions are combined with democratic principles, seems to be an ideal role model - all this gives Turkey excellent opportunities. At least, this is the situation seen from Ankara, which wanted to spread its influence throughout the Middle East and North Africa. Including with the help of moderate Islamists like the Muslim Brotherhood.

And in order to further increase the rating in the eyes of the Arab street, it would be good to say something sharp about Israel. The incident with “Mavi Marmara” came to be as good as it could be, although Turkey still won nothing in the bottom line. Arab Street traditionally does not recognize the Turkish leadership, just the same, however, as the Iranian. The hopes for the Muslim Brotherhood were not justified: the regime of Mohammed Mursi collapsed, and the Egyptian military quickly brought order to the country - without any Turkish participation.

The policy of Ankara in the Syrian conflict has not justified itself. By supporting militants fighting against government forces, Turkey gained neither influence in Syria nor international prestige as a country supporting the forces of freedom and democracy. On the contrary, Turkey is increasingly spoken of as a state that welcomes jihadists from all over the world, providing them with a logistical base and corridors for the transition to Syrian territory.

Now Ankara has reversed. Not by chance about a month ago, the Turkish authorities expelled foreigners from the country near 1200, who arrived in the country specifically to cross the Syrian border and fight on the side of the opposition. The local press wrote that almost all foreigners are citizens of EU countries, as well as “Chechens” (as residents of the republics of the North Caucasus and other Russian Muslims are called in Turkey).

Indeed, foreign fighters for Syrian democracy correspond little to the image of the heroes-liberators. This is either banal mercenaries and outright bandits, or fanatics, or all together - as is the case with the former Dagestan policeman who established “Sharia power” in one separately taken Syrian village, where he arranged public floggings and executions of dissent. As local residents told, the terrorized Arabs with great difficulty got rid of the benefactor with the help of "their" militants who drove the ex-militiaman to Turkey, where, according to rumors, he immediately imprisoned.

In general, it should be recognized that the jihadists who settled in Syria pose a threat to both Israel and Turkey. Not less points of contact in the Iranian issue. The motives of the parties are simple and clear. Iranian-American détente after the 35 years of the Cold War added a headache to Israel, already concerned about the consequences of the Arab Spring. Having received freedom of maneuver, Tehran will certainly try to increase its influence along the northern borders of Israel - in Lebanon and Syria, where the Israelis have been trying to play their game for many years.

Cooperation with Turkey can only go to Israel’s good. The fact is that, although Ankara, in words, welcomes the Iranian-American detente, in fact, she cannot like it by definition. Rehabilitation of the Islamic Republic means the emergence of a serious competitor in the struggle for dominance in the Middle East. Even more, the prospect of a strong and influential Iran is bothering Israel.

Of course, it can be argued that temporary coincidence of interests does not mean a strategic partnership. Indeed, but only if this coincidence is temporary or one-time. But when interests coincide much more often than they diverge, why not call things by their proper names?