December 17 2013
39
In armed conflicts of recent decades tanks often had to work in urban environments to which they were not adapted. Shelling from all sides, short distances and the difficulty of timely detection of the enemy led to the appearance of several modernization projects for various tanks. So, in the USA, the TUSK kit was created, designed to increase the combat potential of the M1A2 Abrams tanks; France developed the AZUR kit for its Leclerc; and Germany - a PSO system for Leopard 2 family vehicles. Several years ago, Poland proposed its version of an “urban” tank. The PT-72U project involves equipping the main T-72 tanks of Soviet or Russian production with a set of special equipment that can increase the level of protection, firepower and combat capabilities of the vehicles as a whole. 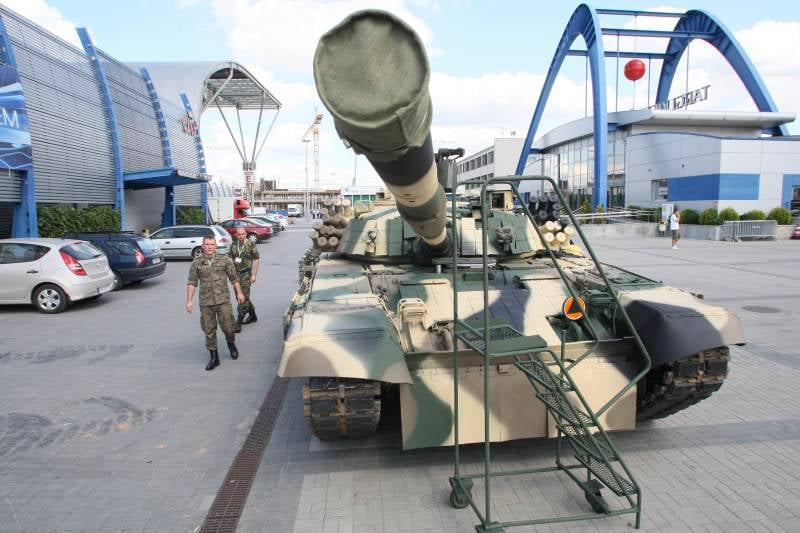 The prototype tank PT-72U was first presented at MSPO-2011. When creating the project, concern Bumar (the main work on the project was performed by ZM Bumar Łabędy SA) took into account the experience gained by Polish tank crews while working in Afghanistan. In addition, the features of other recent conflicts that used T-72 family tanks were taken into account. According to some reports, Polish tank builders also studied the August 2008 fighting.

Like foreign kits to increase the survivability of tanks in urban environments, the PT-72U project is designed to improve the performance of combat vehicles in several ways. The project took measures to increase the level of protection, to improve control over the situation and to increase firepower.

The level of protection of the tank PT-72U is increased in comparison with the base machine by upgrading the available tools and applying new ones. Thus, the frontal part of the hull and turret, as well as the sides of the hull are closed with dynamic armor of a new design. Its modules are smaller in comparison with those used on the base T-72, but at the same time cover the tank's armor more tightly. The rear part of the sides, as well as the hull and tower feeds, are equipped with anti-cumulative grids. Grilles located at a distance of more than 500 mm from the hull or tower can significantly reduce the effect of hitting a single-piece cumulative ammunition. Grilles with a total weight of about 420 kg significantly reduce the likelihood of a tank being hit with rocket-propelled grenade launchers like the RPG-7. As an example of the need to use the gratings, one of the episodes of the war in South Ossetia is given when a rocket-propelled grenade hit the side of a Georgian T-72 tank and caused a detonation of ammunition. 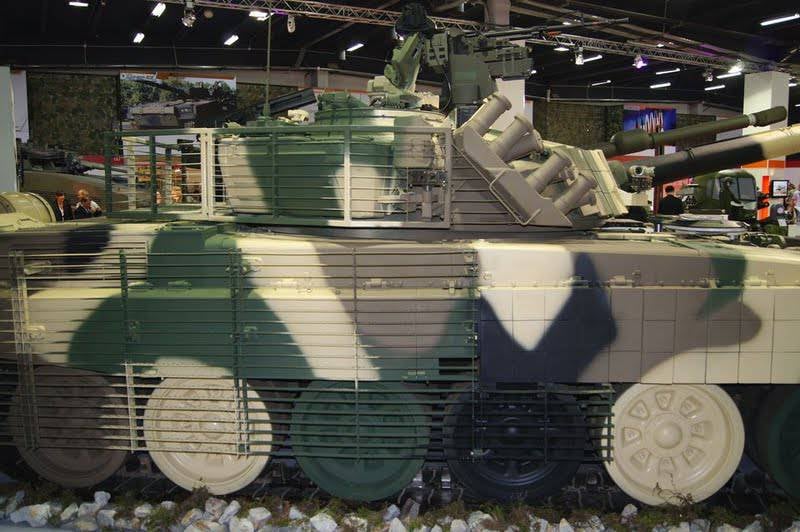 To protect against mines and improvised explosive devices tank PT-72U received several new structural elements. An additional reservation is placed on its bottom, which is a block of several materials. Safety of the driver is ensured by a new chair attached to the roof of the case. A special design of the chair is able to absorb some of the energy of the explosion. These chairs are used in modern armored vehicles class MRAP.

One of the main complaints about the T-72 tank associated with the recent wars is the lack of a remote-controlled machine gun installation. To save the PT-72U tank from this drawback, the designers of the Bumar concern used the remote-controlled turret ZSMU-127 Kobuz, developed by ZM Tarnów. The turret is mounted 12,7-mm machine gun NSVT. The new combat module has a fully autonomous control system and can be used independently of other control systems. weapons. It is equipped with its own observation and sighting devices. The design of the turret allows you to direct the machine gun in any direction with elevation angles from -5 ° to + 55 °. Such angles of guidance in combination with large caliber allow you to effectively hit targets in a fairly large area. For example, the PT-72U tank is capable of destroying the enemy's manpower, hiding on the upper floors of buildings. 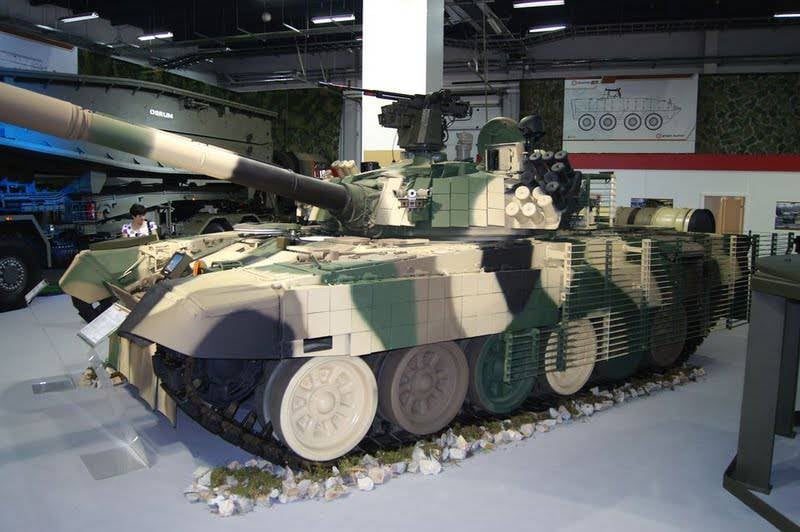 In the context of urban combat, the issue of timely detection of threats is particularly acute. For this, the PT-72U tank is equipped with the ODF Optronics ODR-HV surveillance system. It consists of eight cameras with a field of view width 55 °, located on different parts of the tower. Thus, all of them provide circular observation, and the cameras' viewing areas partially overlap with each other. The video signal from the cameras is transmitted to the monitor installed on the workplace of the tank commander. On the roof of the tower, between the hatches of the commander and the gunner is a block of the ODR PTZ surveillance system. The unit can rotate in any direction and tilt in a vertical plane ranging from -10 ° to + 70 ° from the horizontal. Optics unit ODR PTZ provides 26-fold increase. The ODF Optronics ODR-HV system provides continuous monitoring of the environment and, if necessary, can be used to aim a machine gun turret.

A number of new equipment, including air conditioning, led to a change in the electrical system architecture of the tank. The PT-72U is equipped with an auxiliary power unit with a power of 17 kilowatts. Its main purpose is to provide systems with electric power without using the main engine, for example, during parking. 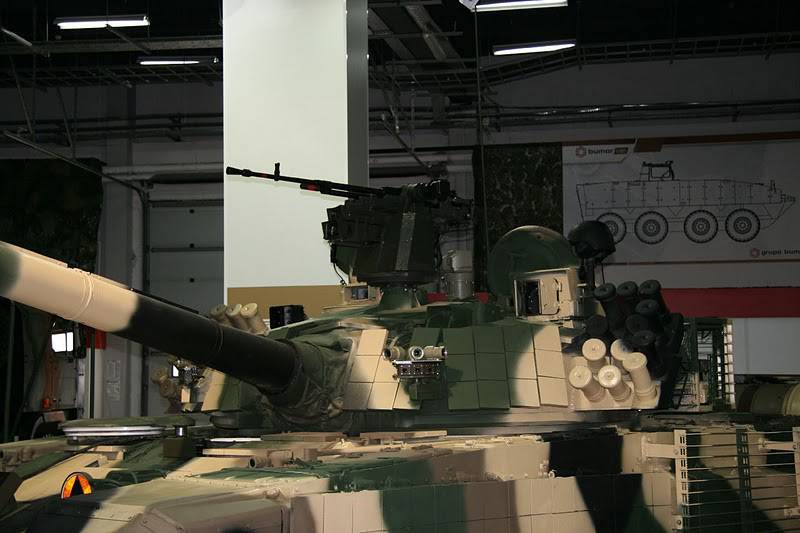 Another interesting feature of the PT-72U project is the reduced gun ammunition. Due to the installation of the air conditioner, the free volume inside the crew compartment was significantly reduced. New equipment was installed at the place of laying ammunition. Because of this, the crew of the tank can only make 22 shots using ammunition located in the automatic loader. Such a change in ammunition received an interesting justification. Polish tank builders analyzed the course of the most recent urban battles in which tanks were used, and concluded that there was no need for full ammunition. It should be noted that the upgraded PT-72U tanks are supposed to be equipped with an updated automatic loader developed by Polish companies.

Simultaneously with the auxiliary power unit, the updated Polish tank received a number of new electrical and communications equipment. So, for communication with other tanks and command, it is proposed to use the Radmor RRC9310AP radio station, and communication between crew members should be carried out using a Fonet-IP intercom. 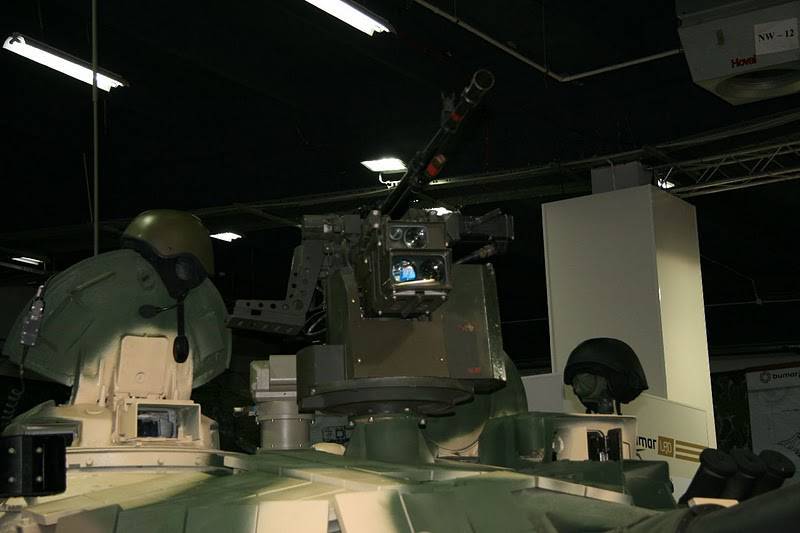 The project of modernization of the T-72 family of tanks to the state of PT-72U is made according to a modular scheme. Due to this, it is alleged that in a relatively short time, a T-72М1, PT-91 or PT-91E tank can be prepared for urban battles. After a similar upgrade, the letter “U” is added to the index of the base machine. In the future, it is possible to adapt elements of the complex for installation on other tanks of the T-72 family.

In May 2013 of the year, it became known about the plans of the Ministry of Defense of Armenia. According to reports of that time, Armenia and Poland created a joint venture in which specialists of the two countries will be engaged in the modernization of the T-72 tanks of the Armenian armed forces. In addition to special equipment for combat in urban environments, in the course of modernization, tanks will receive a new 1000 horsepower engine, which will affect their mobility accordingly. Information about other contracts for the construction or modernization of tanks to the state of PT-72U is missing. 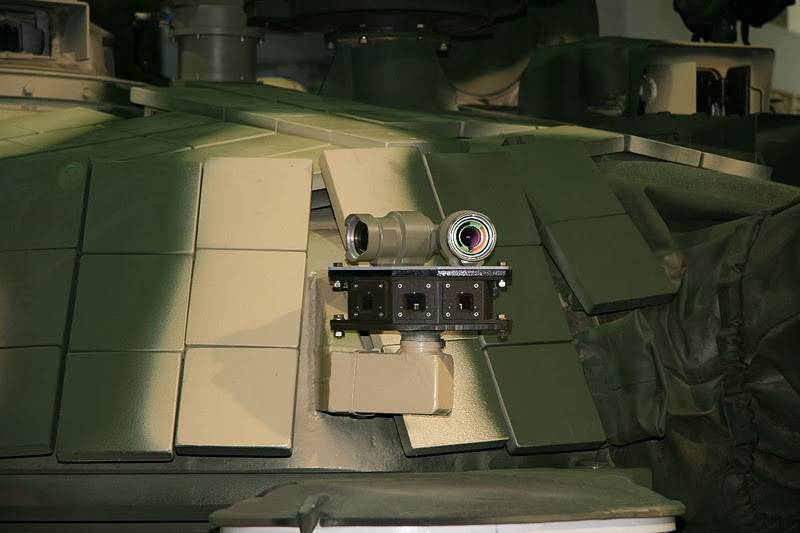 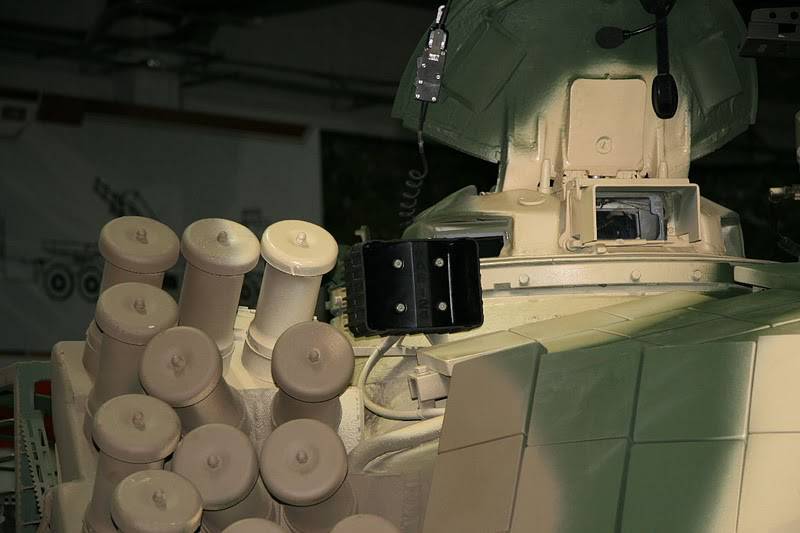 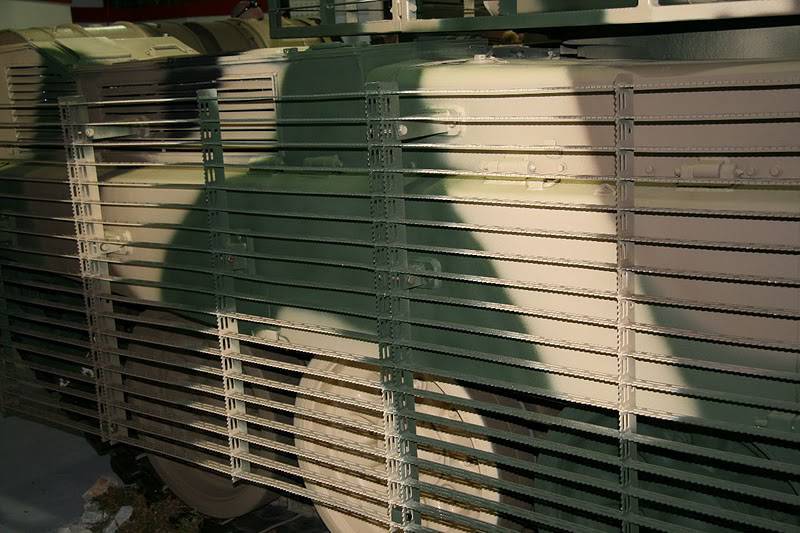 Ctrl Enter
Noticed a mistake Highlight text and press. Ctrl + Enter
We are
Modernization tank LEOPARD 2: the game and the playersLeclerc AZUR. Tank for the city
39 comments
Information
Dear reader, to leave comments on the publication, you must to register.