The story of mobile phones: paranoia or a real security threat

December 17 2013
91
One of the most used by various media and online publications in the outgoing year names was the name of the American Edward Snowden, who revealed an impressive amount of information about the peculiarities of the activities of the American and British intelligence agencies. Of course, it is naive to believe that before Snowden's revelations, no one in the world had any idea that these methods are far from universal altruism and boundless virtue, that they completely fall into the laws of the state and conscience, but, nevertheless, “plums” Information from the American caused a great resonance.


The main characters who raised the alarm after the publication of the revelations of the work of the CIA and the NSA from Snowden are, of course, world leaders. 30, a former CIA ex-worker, said that American intelligence services’s tracking programs were deployed on such a large scale that the security services have all the opportunities for outright espionage not only for those who are allegedly involved in creating a terrorist threat to the US and the entire “progressive world” hundreds of millions of other inhabitants of the planet, including politicians. Among those politicians for whom the NSA was absolutely spying, according to information from Snowden, were Dmitry Medvedev, Angela Merkel, Dilma Rouseff and a number of other persons.

What happened next with Edward Snowden is well known to all. Against the background of all his “travels” around the world and the search for a safe haven in the territory of the Russian Federation, people began to pay much more attention to the technical communication devices they used. Before the revelations of a former employee of the Central Intelligence Agency of the USA, a mobile phone with Internet access (or no opportunity) was perceived by the overwhelming majority of users as a common technique that allows you to communicate with other people and draw the necessary information. But after the revelations, this technique has become by many a kind of key used by Western intelligence agencies to obtain information about a specific user. The same attitude gradually began to take shape with computers integrated into the Global Network.

It got to the point that the owners of smartphones and laptops began to glue the so-called front cameras, so as to protect themselves from probable surveillance of special services. Numerous tips appeared on the Web on how to use an iOS or Android based smartphone in general, so that the ubiquitous Western intelligence agencies would not be able to build a chain of user’s movements, follow his contacts, scan his place of work or rest, record his voice. It has come to the tips, in which the authors quite seriously recommend to wrap iPhones and other smartphones “at night” in several layers of foil and cover with a metal lid, while completely turning off the power by removing the battery (if possible). And if “before Snowden” many people were ironic about Estonian President Thomas Hendrik Ilves, who sealed the webcam on the laptop in the hope of protecting themselves from hackers, then “after” they began to say that here, in general, it’s not up to irony ...

Indeed, it is unlikely that someone would like to see the “independent” activation of the camera on his iPhone (or Android-based smartphone), someone (US intelligence agencies or an advanced neighbor) have the opportunity to get pictures of what is happening with you at that moment. absolutely do not want to share any pictures with anyone. By the way, the inclusion of photo and video cameras on mobile devices based on the mentioned operating systems was recorded by users long before Edward Snowden spoke about the methods used by Western special services.
Information about the strange behavior of mobile devices from Apple began to share users from all over the world in forums devoted to the discussion of the work of technology based on the software of the "apple" company. Mass remarks began to show themselves, starting with 2011, when iPhone 4 and iPhone 4S were actively distributed through retail outlets.

Here are just a few examples of messages about contacting Apple support (users posted their Online).

My friend and I have the following problem: when we connect via FaceTime (video call service), then an old image of myself appears on the screen, and it has a black screen. In this case, the old image is not stored in the memory of the smartphone.

Another user writes that he has about the same problem: he uses the iPhone 4 for a video conversation, while on the screen he sees not his interlocutor, but himself, and at the moment of time that has already passed. The user claims that he did not turn on the iPhone’s camera before and, accordingly, could not save video files and photos. Moreover, according to him, the file that was displayed on his screen is not in the memory of the iPhone either. The user asks the question: if not in memory, then where is it stored, why is it randomly reproduced, and in general who has access to it?

Nasetron user (4 publication on April 2011 of the year) writes that he has the same “glitches” with an iPhone, and that he even changed it to another device. After replacing the situation is repeated. Nasetron claims that Apple’s tech support staff said they need to reinstall all applications and reconfigure the phone so that everything will be fixed. However, this did not help either. The owner of the iPhone naively (after all, it was up to the Snowden revelations) decided that the whole thing was a kind of software error of the operating system. Today, this “mistake” is understandable, just like where exactly the video information captured by the camera of a smartphone is stored and where exactly ...

It is noteworthy that approximately after a week-long discussion on the topic of “software” errors in iPhones, one of the forum users asks a question: or maybe Apple itself organizes the inclusion of iPhones cameras to get personal user data? Initially, this version is subjected to obstruction: they say, how could you think such a thing about the “Holy Company of Apple”, but over time the number of supporters of this theory only grows. The peak of growth is, of course, at the time that followed the revelations from Snowden.

Snowden actually forced him to admit his “program errors” not only to Apple, but also to other large American companies that pledged to “help” the CIA and the NSA “to stand guard over world peace.” As you know, the group of those who “burned” included Google, Facebook, Twitter and a number of other “sharks” of the Internet.

In our country, the situation was not responded to that belatedly, but not quite in time. Only now the legislators decided to request the Russian special services that they know about the possibility of foreign espionage through smartphones. In particular, the notorious deputy of the St. Petersburg Legislative Assembly Milon some time ago called on the Russian special services to check whether the Russians collect fingerprints in the NSA.

On the one hand, all this may seem paranoid, since the receipt of a photo by Ivan Ivanych from Khabarovsk or a fingerprint by Marivanna from Arkhangelsk is unlikely to upset these people. However, there is another side: not only “average” Russians Ivan Ivanich and Marivanna use smartphones and laptops, but also those who have access to the creation or control of military equipment, who belong to a number of high-ranking officials, to representatives of law enforcement agencies of the country. Mobile phones are allowed for use, for example, by soldiers of the Russian army serving in conscription.

If we assume that a smartphone can record information and send it to, so to speak, the current owners, then this device in the hands of the same private (not to mention its fathers-commanders) turns into a real weapon espionage, and, for example, the term "closed military unit" loses all meaning. Here, as it is said, the work of foreign satellites above the head is enough, but the smartphone can still present everything in more detail ... Even at the theoretical level, it can be assumed that the same iPhone of a design engineer of one of the defense enterprises can arbitrarily turn on and take a picture, for example drawings of the technology being developed or filming entering a password into the access system to a secret object, is there really no time for jokes ... Is the “closed meeting” of the government or parliament in this case exactly closed? .. 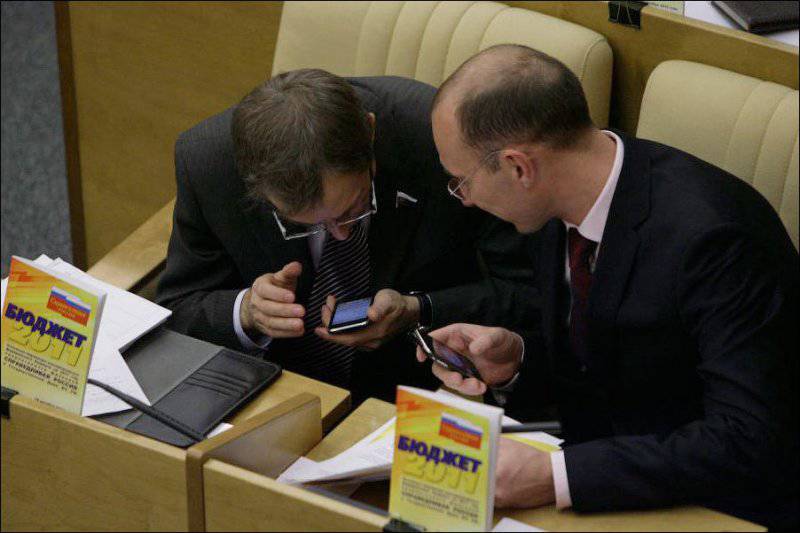 In this regard, the question arises: are conclusions drawn, or until everything is in the spirit: “we need to get rid of the persecution mania”?

Ctrl Enter
Noticed oshЫbku Highlight text and press. Ctrl + Enter
We are
Situational analysis of the death of the MH17 flight (Malaysian Boeing 777), made on the basis of engineering analysis from 15.08.2014Results of the week. "I'm not guilty! He came himself! ”
91 comment
Information
Dear reader, to leave comments on the publication, you must to register.