December 17 2013
26
December 5 François Hollande announced the start of military intervention in the Central African Republic. The president promised to double or more than double the French contingent in the CAR. On the same day, members of the UN Security Council unanimously voted in support of military intervention in the CARs. The need for an invasion was due to the fact that in the spring of 2013, power in the country was taken over by Michelle Dzhotodiya, who arbitrarily declared himself president, and the country was seized by unrest, accompanied by armed clashes. The number of dead goes to hundreds. 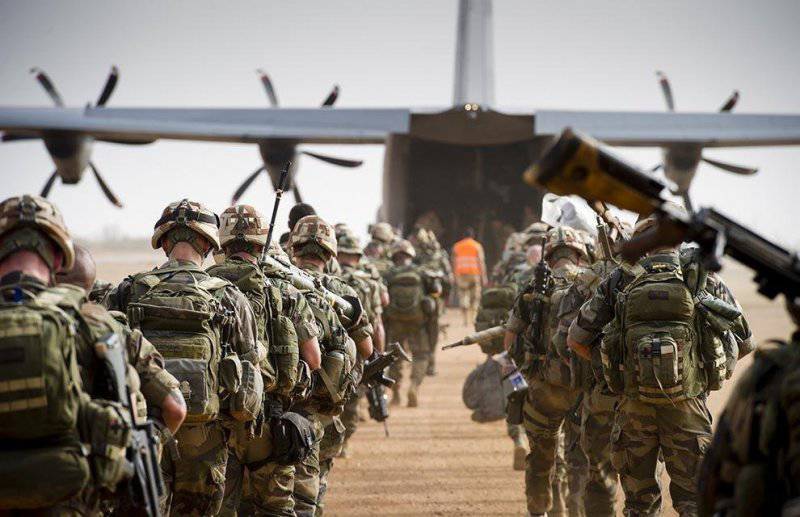 In Hollande, words and deeds differ only in eight cases out of ten. He promised to raise the economy in the country - it did not work out. He promised to improve the life of the proletariat — it did not take place (the workers even call this socialist a “traitor”). With pension reform ... However, without this, everyone knows that Hollande has a record low rating. But Hollande swore to gays that he would give them rights and freedoms - and he gave them. And now he said that he would arrange an intervention in the Central African Republic - and he did it.

Of course, the Central African Republic is not Syria. The President gave the word to double the contingent - and even exceeded the promise. December 5 was in the CAR 650 French soldiers - from December 6 it became 1600.

France was a little helped by the United States. It is the American military transport aviation transferred the French armed forces from Burundi to the Central African Republic.

According to the UN mandate, France and the African Union have half a year to restore order in the African Republic.

On the evening of December 10, Francois Hollande spoke to the soldiers in Bangui, and the French Minister of Defense Jean-Yves Le Drian delivered a speech on 13 on the occasion of the peacemakers. The fact is that the French have already suffered their first losses. On the night of December 10, two soldiers killed in a shootout near Bangui Airport died in the CAR.

Recall that earlier, in January 2013, the French troops entered Mali.

Sophie Dejardan, euronews channel, Interviewed by Francois Sudan, editor-in-chief of the Wife Afrik newspaper. In particular, the expert explained the difference between the invasion of the French in Mali and the operation in the CAR:

“First of all, the difference is in what France looks like. We were told about the genocide. This is not entirely true, but it was necessary to use extremely strong words to justify this intervention in the eyes of public opinion. This is the first. The second difference is who the French should fight against and whom to disarm. In Mali, everything was very simple: they were AKMI and Mudjao jihadist groups. Here it is the Seleka grouping, but also its opponents. Therefore, France is forced to fight on two fronts. And finally, the third, very important difference in what happens next. In Mali, everything was simple, there was a political class there and it was possible to hold elections in a fairly short time. There is nothing like that in the CARs. ”

Perhaps one of the constituent interests of France in the CARs is economic? Yes. And it does not hide.

“... And besides, France has some economic interests in Central Africa. Do not forget that there is uranium there, which means that the interests of Areva. The problem is that you need to prepare for a very long and expensive operation. ”

We will listen to other experts. Their opinions are given by Sergey Duz ("Voice of Russia").

Tatyana Zvereva, head of the Center for Euro-Atlantic Studies and International Security at the Institute of Topical International Problems of the Diplomatic Academy of the Russian Foreign Ministry, finds several prerequisites for French interest in Africa.

European countries have long had connections with many former African colonies. This fully applies to France. More General de Gaulle achieved a bilateral agreement, in accordance with which France, leaving Africa ... did not leave. Paris prepared representatives of the local elite, and French firms received preferences in local markets. Yes, and French entrenched in the former colonies. Today, Paris is interested in the development of old ties, since it needs not only a sales market for its goods, but also African mineral deposits, the expert believes.

But what the head of the Center for French Studies at the Institute of Europe, RAS, Yuri Rubinsky, thinks:

“The last two operations involving the French armed forces in Mali and the Central African Republic have been approved by the UN Security Council. Russia would hardly support actions that diverge from the goals and objectives of the United Nations, but pursue the egoistic goal of restoring the influence of the former metropolis in its African possessions.

Indeed, the activity of France in Africa has increased over the past year. And this is due to several reasons. First, France has serious problems in the main direction of its foreign policy and foreign economic interests - in the EU. By increasing its activity outside Europe, but in a region closely connected with the continent, France, as it were, compensates for a certain decrease in its capabilities.

Secondly, France is concerned about the fact that its influence is declining under pressure from the United States and China. Today they are the main players in the struggle for the resources of Africa, for its markets. By the way, Africa has good economic and demographic perspectives. So the struggle is for an important bridgehead. France demonstrates that she has not left and will not leave Africa. She is going to expand her position. But at the expense of whom? This is how it goes. ”

Thus, all the same markets, all the same economy, covered by the UN mandate and the slogans of restoring law and order and democracy. Yuri Rubinsky cites another example of French politics - in Côte d'Ivoire. There, under the pretext of protecting their citizens in a civil war, France supported one of the candidates in the presidential election.

As for the intervention in the CARs, it is difficult to predict whether or not the terrorist international can be defeated there and the control of vast territories established with the help of small armed forces.

On the other hand, we note, France does not act alone - and from the very beginning it was not eager to take on a mission exclusively for itself. Moreover, Hollande constantly asked for help from Western countries: from Great Britain, from Germany and other EU countries. According to him, "terrorism knows no boundaries." However, for the time being, Hollande is really no one to help; everyone understands that France went to the CAR as a colony. So Paris is unlikely to cope with local thugs for six months.

But the six-month UN mandate may be extended. By the way, Paris is not going to control the entire territory of the CAR: let the united African troops do it, and the French will restore order where Areva’s energy interests are. The rating is rated, and Hollande needs if not to win the fight for the “black continent” with China, but at least not to give way in some strategic areas. And the question of developing uranium deposits is of great concern to French energy capitalists, not only in the CARs, but also in Nigeria and in Mali. In the CAR, in addition to uranium, there are large reserves of gold and diamonds, as well as oil. France is among the major buyers of CAR resources, but in recent years it has been inferior to Japan, China and some other countries.

Thus, the joint operation of the French and the African Union is already beginning to bear fruit. If Jotodiya, who previously admitted that he could not control the various groups operating in the country, then with the help of the interventionists he would be able to organize at least fiction of democratic elections. And it is unlikely that France will show itself in this election only as a passive observer. Not for this, it participates in an expensive military operation in times of economic crisis. In Paris, they understand that in the second decade of the 21st century the division of the African “pie” occurs, and tries not to be late and cut off its tidbits.

Observed and commented on Oleg Chuvakin
- especially for topwar.ru
Ctrl Enter
Noticed oshЫbku Highlight text and press. Ctrl + Enter
We are
Results of the week. "Another small, but rather big question"CAR: imperialism in action
26 comments
Information
Dear reader, to leave comments on the publication, you must to register.